Why can these tasks cause such problems?

Sensors are a special kind of operator that will keep running until a certain criterion is met. The criterion can be a file landing in hdfs or s3, a partition appearing in hive, some external task succeeded or even it is a specific time of the day.  Executing a sensor task is very straightforward, sensors call the “poke” function for checking the criterion in a time interval, usually every 3 mins,  and succeed if their “poke” functions return true and fail when sensors timeout. The execution of a “poke” is very fast. Most of the time, sensors are waiting for the next “poke” time coming.

SubDags is used to define the repeating patterns in a DAG and it makes complicated DAGs structure cleaner and more readable. The implementation of the SubDagOperator follows a similar pattern as sensors. It creates the dagrun for a subdag in pre_execute function and keeps “poking” the dagrun status in the execute function.

There are more other operators such as SparkSubmitOperator. The spark client in airflow submits the job and polls until completion. All these tasks, after some initialization work, fall into a lightweight and may be long running status which is inefficient.

From the previous analysis we can summarize issues for these tasks falling into the same “long running, lightweight” pattern:

In Airbnb existing sensor tasks account for 70% of concurrent airflow tasks and the number keeps growing. Usually they are long running so we have to use a large number of worker slots to run these tasks at peak hours. However sensor tasks are light weight tasks that poke every 3 minutes and idle most of the time. Since we are having more and more sensors, the increased number of tasks also increased DB load by generating heartbeats.

-- What is Smart Sensor

The smart sensor is a service which greatly reduces airflow’s infrastructure cost by consolidating some of the airflow long running light weight tasks.

Instead of using one process for each task, our main idea to improve the efficiency of these long running tasks is to use centralized processes to execute those tasks in batches.

To do that, we need to run a task in two steps, the first step is to serialize the task information into the database; and the second step is to use a few centralized processes to execute the serialized tasks in batches.

Good news is that the heartbeats decrease as the running process decreases and the database load is reduced correspondingly.

Our way to handle duplicate sensors is : first,  we create a hash for each job by the job’s meta data. We use the hash as the signature of the job such that If two jobs have the same hash, they are duplicate jobs.  We then save the job’s  hash in the database along with other serialized info from the job.  The centralized process will only process task with the same hash once in each poking cycle. 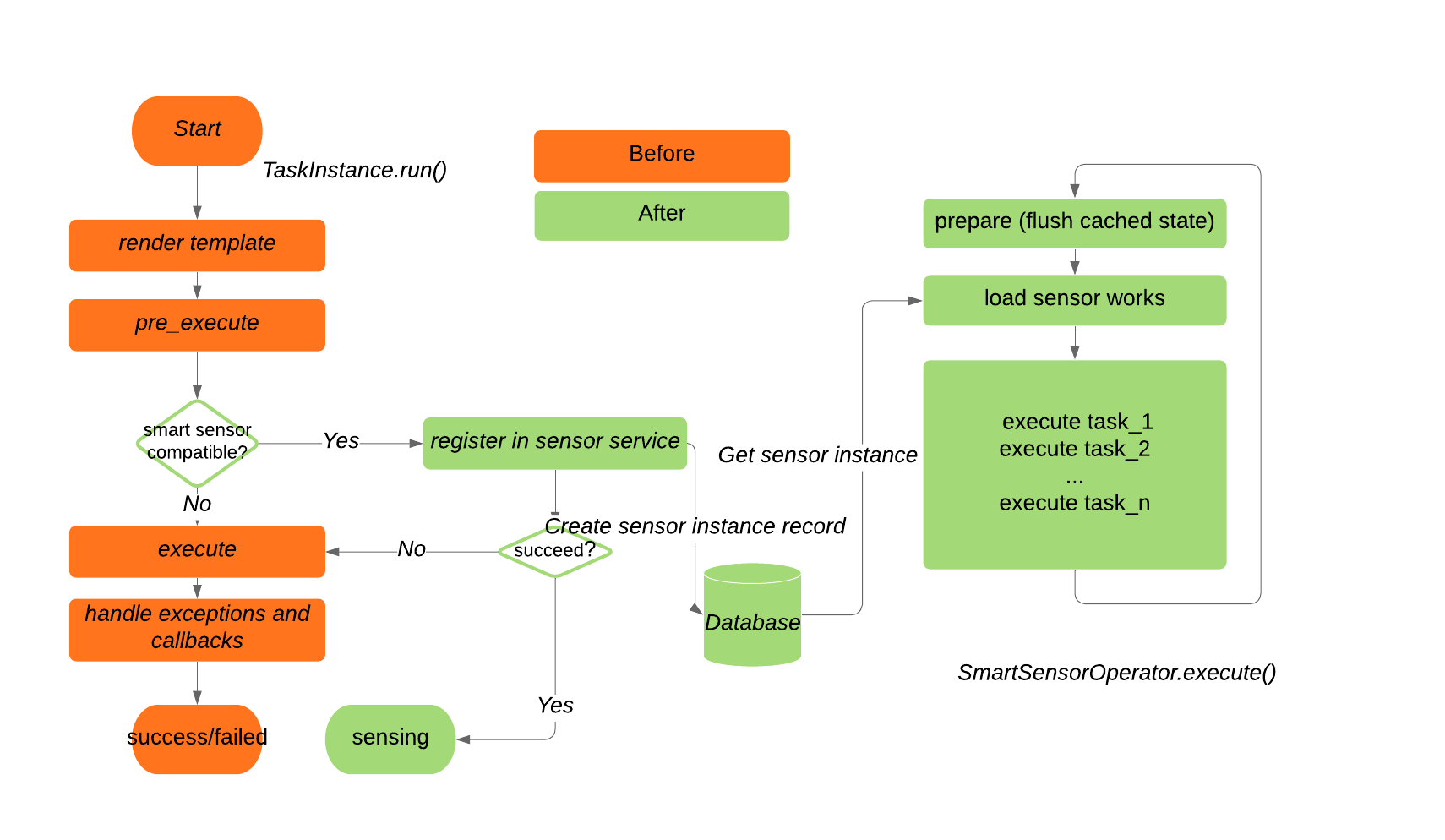 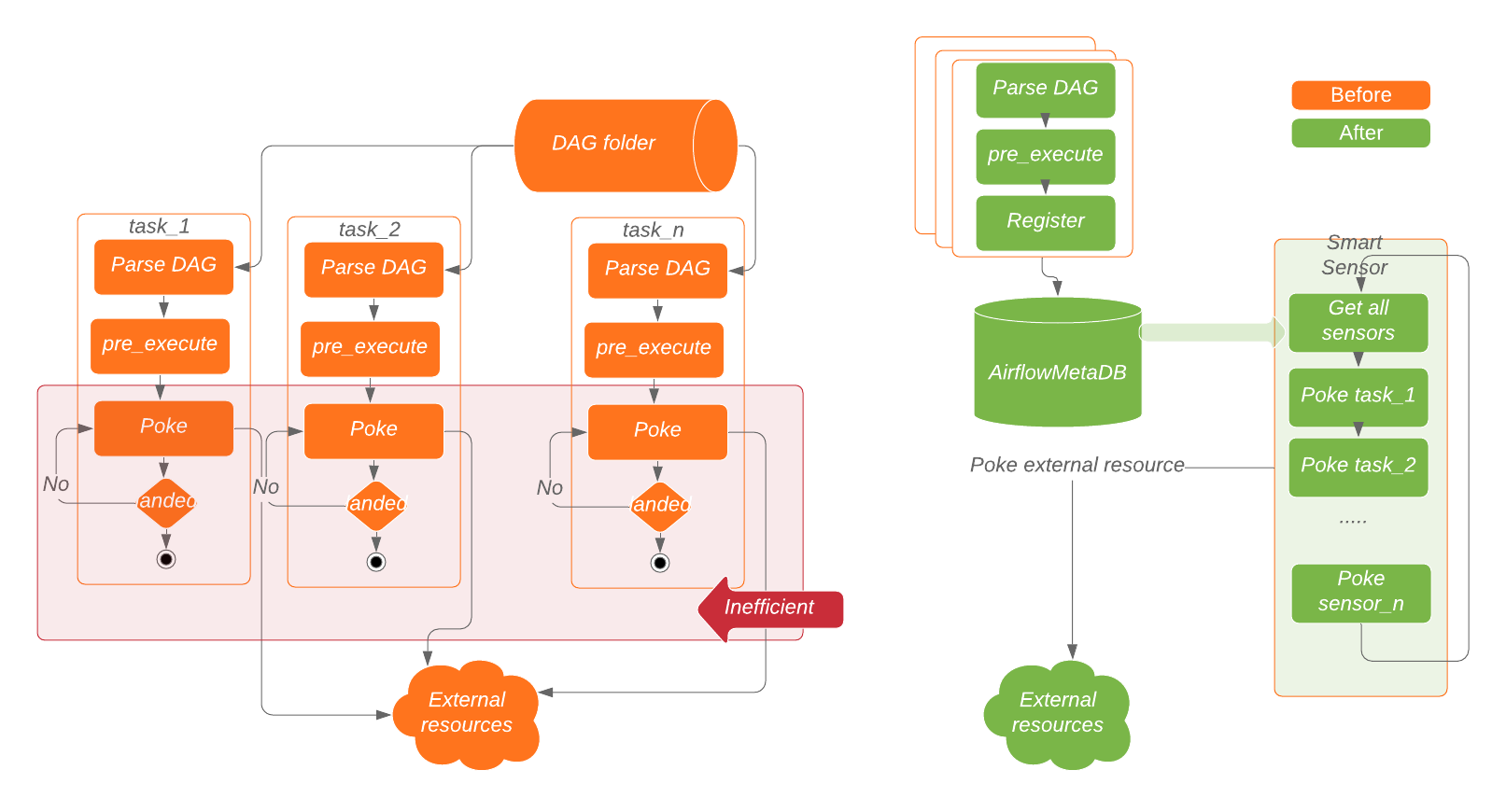 Details of Issues that need to be addressed and the analysis.

The purpose is to avoid parsing all big DAG files from the smart sensor operator. Most sensors have simple and limited arguments, if we can retrieve these from DB without parsing DAG at runtime, one process should be easily handle hundreds of poking jobs.

To handle a large number of sensor jobs, multiple smart sensor tasks need to be spinned up. The sharding logic in smart sensor is in the following diagram.

We add columns in sensor_instance:

The sensor classpath was persisted into DB at sensor registration. Which will be used to import the sensor class in smart sensor. The smart sensor then uses this class to create a cached sensor task object whose “poke()” function will be reused.

How to enable/disable smart sensor

Enabling/Disabling the smart sensor is a system level config which is transparent to the individual users. An example of smart sensor enabled cluster config is as follows:

How to support new operators