"java: command not found" when starting the pipeline

This usually occurs due to java command not being available when submitting a multi-language pipeline that uses a Java transform to the Beam runner. Multi-language wrappers implemented in the pipeline SDK may try to automatically start up a Java expansion service, hence java command being available in the system is a pre-requisite. This can be resolved by installing JDK in the machine where the job is submitted from and adding the JDK directory with the java binary to the environment variable PATH.

The solution will be to update the user's transform to produce output PCollection types that use standard coders at the SDK boundaries.

This usually means that an expansion request that is sent from Python SDK to a Java expansion service contained Python specific PickleCoder that Java SDK cannot interpret. For example, this could be due to following.

This usually means that Python SDK was not able to properly determine a portable output PCollection type when expanding the cross-language transform. So it ended up picking the default PickleCoder.

But Java SDK is unable to interpret this, so it will fail when trying to parse the expansion response from the Python SDK.

The solution is to provide a hint to the Python SDK regarding the element type(s) of the output PCollection(s) of the cross-language transform. This can be provided using the withOutputCoder or withOutputCoders methods of the PythonExternalTransform API.

For supported runners, you can set the log level of Java transforms by adding the corresponding pipeline option as a local pipeline option in Python side. For example, to suppress all logs from Java package org.apache.kafka you can do following.

Debugging a Python Test that calls a Java transform

The public documentation is great on creating and using cross-language transforms. For developers, however, running tests and debugging them is a bit different.

We will showcase how to debug the following test sql_test.SqlTransformTest.test_two_pcoll_same_schema.

Set up the input arguments to the Python test. 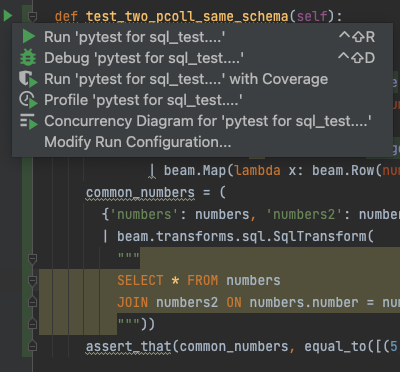 In Additional Arguments , add the arguments. For this example, we add

The Gradle build file defines how to run the expansion service. To do this manually, go to the Gradle tab in Intellij, go to this path beam/sdks/java/extensions/sql/expanstion-service/tasks/other/ , and find the `runExpansionService` entry. 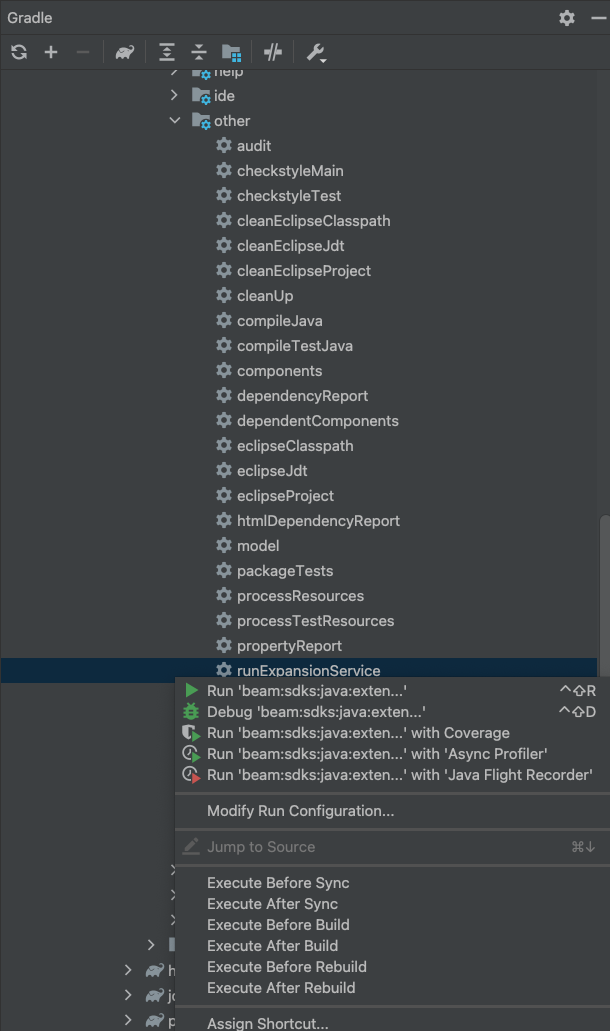