Currently there is no IPv6 support in Basic Networking in CloudStack. It is all IPv4-only and with the depletion of IPv4 it's desirable that CloudStack supports IPv6 on all network types.

The goals for IPv6 in Basic Networking are:

This document only covers IPv6 connectivity for Instances. It does not cover:

The goal is Q1 2016 to have a working IPv6 implementation where Instances obtain a /128, but also get a subnet routed. A /60 for example.

The diagram below shows how this would work: 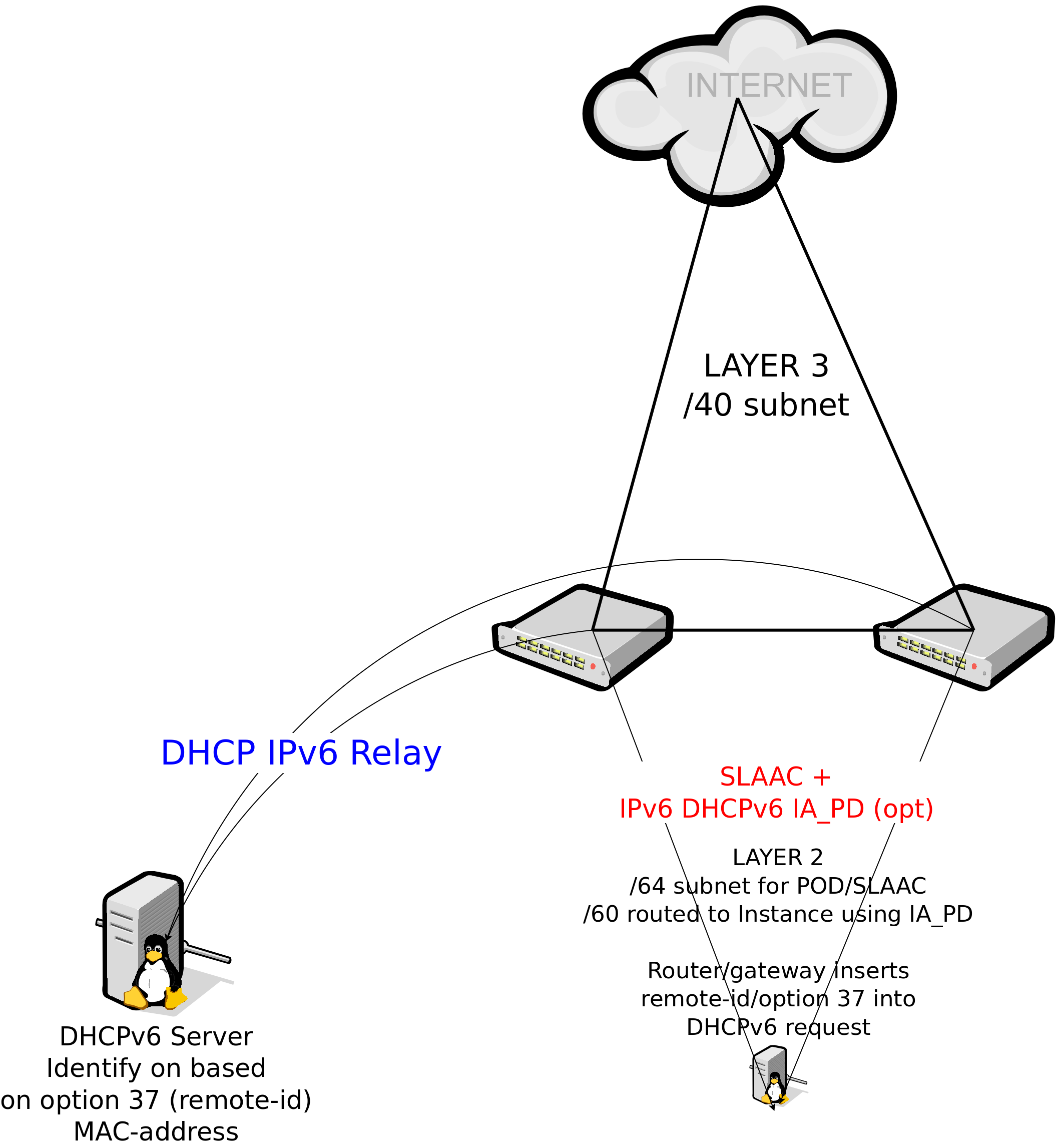 A few things are required for this to work:

When a Instance boots it sends out a Router Solicitation and it gets the information from both routers. This is done by the Network Stack of the Instance and is supported by all major Operating Systems.

Using SLAAC the Instances will obtain their IPv6 address. Linux properly uses the MAC Address to generate the IPv6 address. Only Windows has to be configured to not use the random identifier, but the MAC address.

Here it has two default routes via both routers. These routes were obtained by the Router Advertisements.

The Instance now has a single /128 address, but we also want to route a subnet to the Instance.

CloudStack can calculate which address an Instance will obtain. This is described in RFC4862.

The address of the Instance will not be stored in the database. Using the /64 subnet and the MAC address it can be calulcated when it is required. This saves additional database queries and storage.

This is ONLY for Prefix Delegation purposes. The IPv6 Address for an Instance is generated by the Instance using SLAAC.

With IPv4 a client is identified by it's MAC address. With IPv6 the client generates a DUID which is used for identification at the DHCPv6 server.

Since the client generates this DUID we can not trust it.

DHCPv6 has option 37 (remote-id) described in RFC4649. Routers/gateways (outside of CloudStack's control) have to insert the MAC address of the Instance into the DHCPv6 request so that the

DHCPv6 server can use the MAC Address as a reliable source for identifying the Instance/client.

The recommendation is to use ISC Kea as a DHCPv6 server. It supports identyfing clients based on their MAC address.

In Basic or Direct Attached networking this DHCPv6 server has to run somewhere. Again, the DHCPv6 server is only required when DHCPv6 prefix delegation is used.

It doesn't have to be in the same Layer 2 LAN, as long as the DHCPv6 requests can reach it somewhere. This is done by configuring a DHCPv6 Relay Agent on the routers/gateways in the network. This is outside the scope of CloudStack and has to be configuted by the Network Administrator.

In VPC/Isolated Networks the Kea DHCPv6 server can run inside the SSVM.

IPv6 also need security grouping. It is similar to IPv4:

Afterwards the security groups need additional rules, we have to allow:

ICMP is a essential part of IPv6. Blocking ICMP will break IPv6.

Using DHCPv6 the client can request one or multiple Prefixes using Prefix Delegation. The client will be identified based on option 82 (remote-id) as described above.

This DHCPv6 request is picked up by the routers and relayed to the DHCPv6 server.

This DHCPv6 server then replies with a /56 (configured by us) out of the /40 routed to the routers (also configured in CloudStack).

The routers see this reply come back and add a route (pseudo) to their routing table:

The reply is now relayed back to the Instance.

In CloudStack we pre-configured a few things:

We also allow this /60 in the Security Group of the Instance (ip6tables/libvirt on the hypervisor).

We should note that multiple prefixes per Instances should be allowed. DHCPv6 supports this.