Release principles for Apache CloudStack 4.6 and up

This page describes the Release Management principles for Apache CloudStack 4.6 and newer releases.

Master needs to be stable at all times

Stable master means all code can be cleanly compiled, all automated tests are passing (giving enough room for exceptions when automated test are flakey), and test coverage does not go down* (otherwise that would render the automated testing less useful every time).

*Coverage may go down if code that was covered is deleted

LGTM, "Looks Good To Me" is given once a reviewer of a Pull Requests gives an OK to proceed.

Starting in 4.6, we no longer use cherry-picking to get commits from master to release branches.

Instead, we merge a PR to a release branch, then merge it forward to the next release and finally master. See image for example. 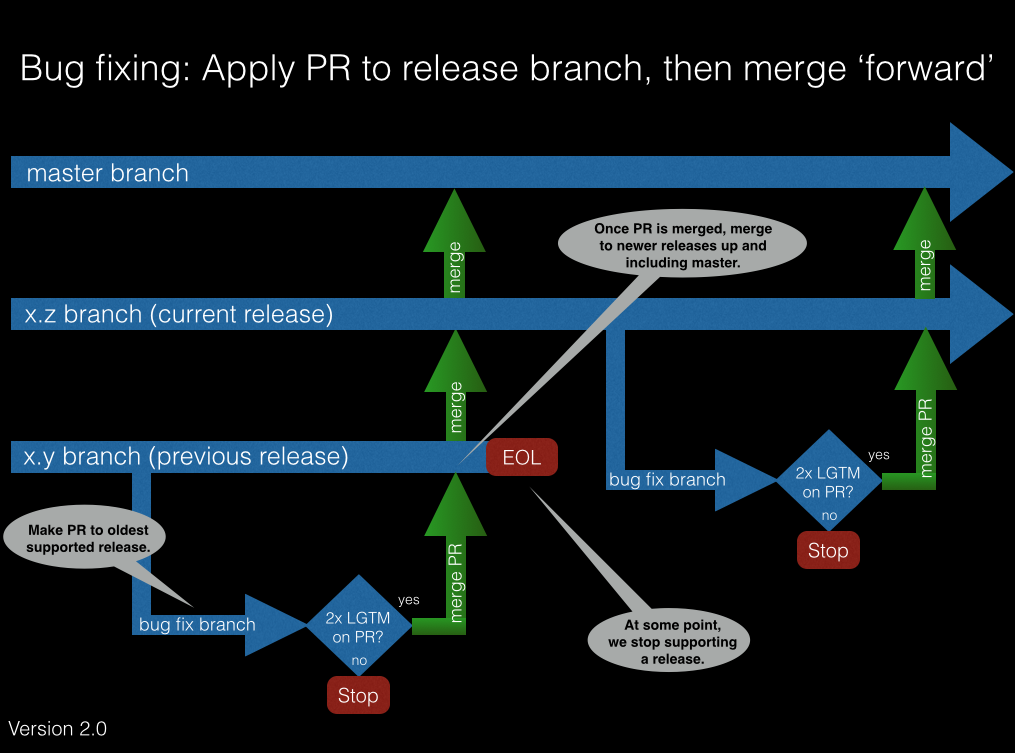 Which releases to maintain? 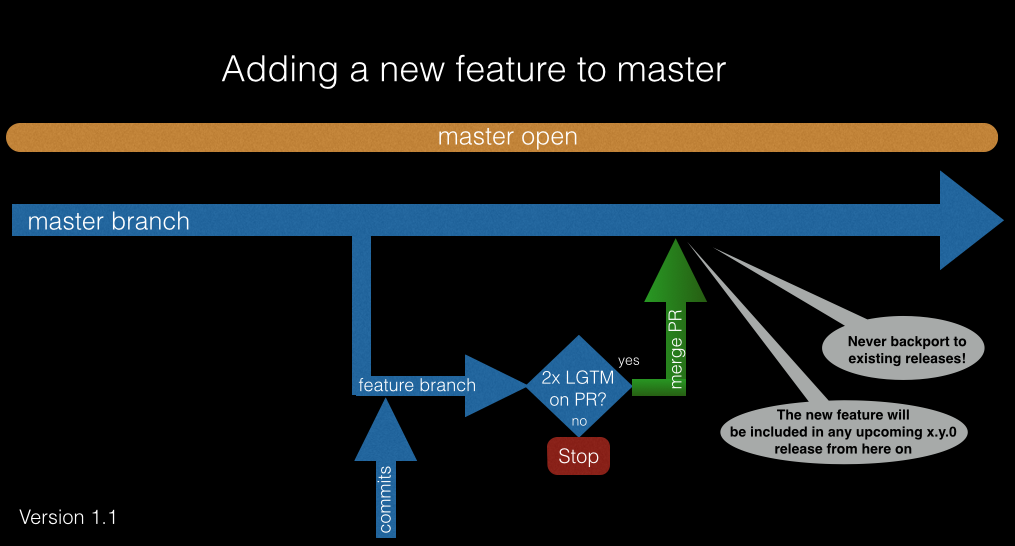 How to merge a Pull Request?

See this wiki article for a guide on how to do it.

Why merging forward over cherry-picking from master?

The biggest discussion we had when writing up these principles, was the choice between either:

The benefit of 1) is that we know everything will be in master. The downside is that cherry-picking changes the commit hashes which makes it hard to find in which releases a given commit is.

The big benefit of 2) is that when we merge a pull request to the oldest release and merge it forward, the commit hashes stay the same all the time. We also automatically make sure that bugs are fixes in supported releases.

As a bonus of 2), when we work like this, GitHub will much better detect we merged certain pull requests that now stay "open", even when we write "This closes #1234.

That's why we decided to go for option number 2.

An optional helper script with detailed usage and help can be found here.

Scenario 2: Merging a pull request to a release branch

An optional helper script with detailed usage and help can be found here.

More info on this wiki page.

The tools are located in the CloudStack repository.

The commit message for a merging a pull request, should look like this:

It is important the pull request is merged to the branch. This script will help you do that (it will be added to the CloudStack repository).

Detailed usage and help can be found here.

Forward merging to the next branch

The commit message for forward merging, should look like this:

It is important the pull request is forward merged to the next branch. This script will help you do that (it will be added to the CloudStack repository).

Detailed usage and help can be found here.

We should all use the same tools to merge pull requests and do forward merges!

When using these tools and this way of working on Apache CloudStack keep in mind that you work with two origins:

If you merge on a clone of one of them while it is behind on the other (or with its origin) you are merging on a commit that is no longer a HEAD. You will get an error when you push due to conflicts. At this point it is safest to throw away your merge, update (git fetch) you local clones and merge the PR again.

Based on these principles, Rajani Karuturi and Remi Bergsma volunteered to be the Release Managers of Apache CloudStack 4.6.

Thanks to Rajani Karuturi, Daan, Miguel Ferreira, Wilder Rodrigues and all others for working on this with me (Remi Bergsma).