This page is outdated and will be updated. Please see this page for our Release Principles for Apache CloudStack 4.6 and on.

The remainder of this document provides an overview of the planning, scheduling and support processes that the community has adopted for the Apache CloudStack project.

Feature releases are planned for every 4 months, with a 2 month overlapping development window, giving each feature 6 months to go through it's cycle.

Months one though four are designated for features to merge into the project's master branch. Typically, architectural change and high risk feature additions should be introduced within the first two months of that phase. Month five is dedicated to end to end testing of the merged features and changes, as well as documentation finalization. Month six is focused on wrapping up final translation updates, last minute blocker bug fixes and preparing / executing the formal release voting process.

Critical dates for each feature release cycle will be documented on that release's planning page, but a generalized schedule is as follows:

Voting on a release is a formal act within the ASF. For that reason, no specific release day can be scheduled in advance (only the start of the first round of voting). For more information about that process, see the Apache Release Policy.

Typically, the project will have one or more release votes, which last at least 72 hours each.  The release manager has the right to cancel any release vote, if an issue is discovered that warrants a fix and restart of the voting process.

Bug fix (including security related bugs) are provided as incremental updates between scheduled feature releases. The project has not decided to do them on a specific schedule, but instead when there are enough appropriately important bug-fixes applied to the source release branch, a community member will proceed with creating a release. A single security vulnerability fix is typically considered enough to warrant a bug-fix release.

Fixes that are typically applied to both master and any active / relevant release branch. 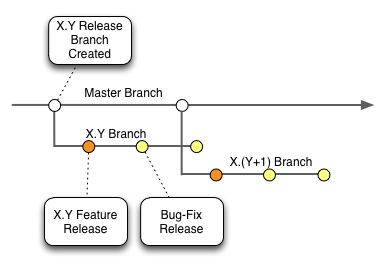 Starting with our 4.0.0-incubating release, Apache CloudStack makes use of Semantic Versioning for it's release numbering. One exception to this numbering scheme, is that the "-incubating" qualifier will be added to all release numbers until the project graduates from the Apache Incubator (this is specifically due to the rules stated in the Guide to Release Management During Incubation). Releases of CloudStack from before it's donation to the ASF did not follow Semantic Versioning.

For those that may not be familiar with Semantic Versioning, the number format is: X.Y.Z, where X is the major version, Y is the minor version, Z is the patch number. The community strives to ensure backward API compatibility within each major version (i.e.: code written against the CloudStack 4.0.0-incubating API should work with all future 4.y.z versions). The community may decide to increment the major version number in situations where underlying implementation details require a cloud operator to face significant challenges in upgrading from one version to the next. This should be rare situation.

Support Lifetime of a Release

Due to the Apache CloudStack community's adoption of Semantic Versioning, the project has chosen to adopt a release support model as follows:

In practical terms, this means that someone running 4.0.0 should reasonable expect to see at least a 4.0.1 release to address any critical bugs found (and resolved) before 4.1.0 is released.

Releases of CloudStack from before it's donation to the ASF are not supported by the Apache CloudStack community.

Given the nature of this release support model, the community believes that providing an upgrade path from any CloudStack release to any later CloudStack release is a critical feature for our users. This includes upgrades from one major version number to the next. It should be expected that any exception to a smooth upgrade path is either a critical bug to be addressed, or will be documented very clearly (and it will cause a major version number increment).