Currently CloudStack has its own authentication mechanism, the two of which methods include username/password auth which is cookie/session-key based and another which is HMAC signature based that uses api key and secret key.

Many organization would want to use their existing authentication mechanism and have Single Sign On (SSO) and Single Log Out (SLO) to work on CloudStack UI and clients. SAML (Security Assertion Markup Language) 2.0 is an old, stable and widely used XML based authentication and authorization protocol supported by Salesforce, Google Apps and other public and private companies and the aim is to integrate the SSO SAML support in CloudStack.

This feature will be useful for users who may want to re-use their existing SAML 2.0 IdP (Identity Provider) service which holds the responsibility of users management, authentication & authorization assertions. In SAML terminology, CloudStack is a Service Provider (SP) that means it's the service that users would want to access and the organization would have their own Identity Provider (IdP) which is an authentication and authorization service backed by a user listing/store such as LDAP, AD etc.

I evaluated many opensource libraries which implement the SAML protocol and the most widely used stable library was OpenSAML. It will be implemented as a plugin using OpenSAML.

The version 1 implementation shipped with ACS 4.5.0/4.5.1 is not production grade, only supports HTTP-redirect binding and has several issues with respect to security, compatibility, support and interoperability.

For testing the plugin with CloudStack, we only need an IdP which can be setup locally using Shibboleth IdP software (https://www.testshib.org), or simply using one of the following free to use public IdP (discovery) service:

An organization that has SAML 2.0 compliant IdP service and wants to integrate SSO with CloudStack can use this feature.

For Admins: Their administrator would create a unique entity ID and put in CloudStack SAML plugin. The CloudStack instance will have a base URL (http://domain/client etc.) which is configured in the SAML plugin. The admin will set IdP public key, IdP URL to the plugin using an API or web UI or as file where CloudStack is installed. The admin will generate X509 certificates (public and private keys) and store them with SAML plugin's java keystore as file, the public key and SAML SP metadata will be store at IdP server. Admin will configure whether logging out from CloudStack will locally logout users or globally. The admin will also configure default SAML authenticated user role which can only be changed by admin later once user is created/logs in the first time.

For Users: The users will open CloudStack UI URL in their browser and will be redirected to IdP URL. Once authenticated by IdP, the IdP will redirect users back to CloudStack UI which on receiving valid assertion from IdP will allow users in. If this is the first time users access CloudStack UI, CloudStack management server will create the user (with no password within CloudStack) using SAML assertion information (email, username etc).

A SAML based SSO infrastructure consists of three entities - user-agent (UA), service provider (SP) and identity provider (IdP). The UA is the user/browser, the SP is the application that the UA is accessing (i.e. Apache CloudStack UI) and the IdP is the identity service and does authentication and authorization, management of users among other things. IdP could be backed by LDAP, AD etc. For the scope of this feature, we only need to implement SAML SP plugin in CloudStack and use any free SAML 2.0 compliant IdP server for testing.

Note: After first round of discussing with community I'll add more design and architectural details. 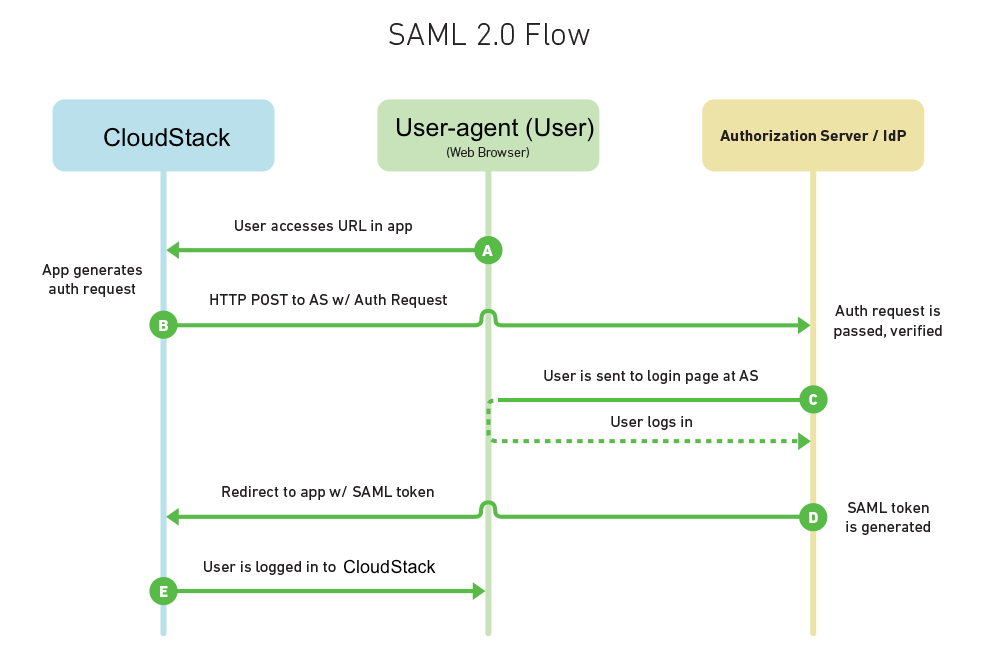 For testing the plugin, you may use one of publicly available IdP servers such as SSOCircle etc. or download the IDP ova appliance:

The IDP appliance has a pre-configured Shibbotleth 2.4.0 server and OpenLDAP.

The hostname idp.bhaisaab.org is A record to IP 172.16.154.200, if you need to change the IDPServer appliance IP (say in KVM, VMWare Fusion, VirtualBox), add an entry in your hosts files for idp.bhaisaab.org domain.

Note: After starting the IDP VM, run "sudo ntpdate pool.ntp.org" to update its date/time and make sure that the management server host has same effective time as the IDP server. In case time/date mismatches, the IDP server on single-sign-on will state security errors and fail.

To test, build CloudStack, deploydb and deploydb-saml. The SAML plugin is located in the source directory at this location: "plugins/user-authenticators/saml2/"

The deploydb-saml will automatically configure ldap and saml auth plugin in CloudStack to use with this appliance.

Log in to CloudStack and check/update global settings by searching for all config settings starting with 'saml'. If you need to change them, restart the management server.

Import users from LDAP or add them manually. Next authorize the user(s) to use SAML SSO against a IdP server by choosing the correct entity ID.

Log out and select an appropriate IdP server from the list of dropdown (in the default case it will be only one, pre-selected) and enter the domain where your account is, the default domain is the ROOT or / domain. Click on SAML SSO button which will redirect you to the IdP log in page, where upon successful authentication you'll be redirected to CloudStack UI with your user account logged in.

As a compatibility requirement, the SAML SP implementation in CloudStack need to adhere to the SAML profile: http://saml2int.org/profile/current/

There is a strict policy on timestamps and cryptographic token checking using IdP server's public key and SP (CloudStack's) private key, so sometimes upon successful authentication the UI may not get logged in - in this case simply re-login using SAML SSO. By default when the management server starts for the first time, SAML certificates are created and stored in cloud.keystore table.

On every SAML SSO attempt, an entry is recorded in CloudStack's cloud.saml_token table to protect against spoofed log-in attempts or an IdP initiated log in where CloudStack won't know in specific domain the user wishes to log in. On Firefox, SAML tracer add-on can be used to view the SAML tokens that get exchanged. Every SAML Request (AuthnRequest) is a XML encoded HTTP-POST request as per the saml2int.org profile, the XML consists of the issuer information (SP information, name, entity ID), a unique ID (securely generated random string) and some security enforcement on how to authenticate the user. In cloud.saml_token table, we store the IdP we will redirect the user to, along with the unique ID used in the XML and the domain name to be later referenced.

After successfully authenticated from the IdP/federation login system, a SAML Response is sent to the CloudStack SAML Plugin either as a HTTP-Redirect (GET) or HTTP-POST (POST) request that consists of an XML that has issuer information (IdP entity name, timestamp etc), response information (saml token ID, response to ID), authentication status (success, failure etc) and encrypted and unencrypted attributes. 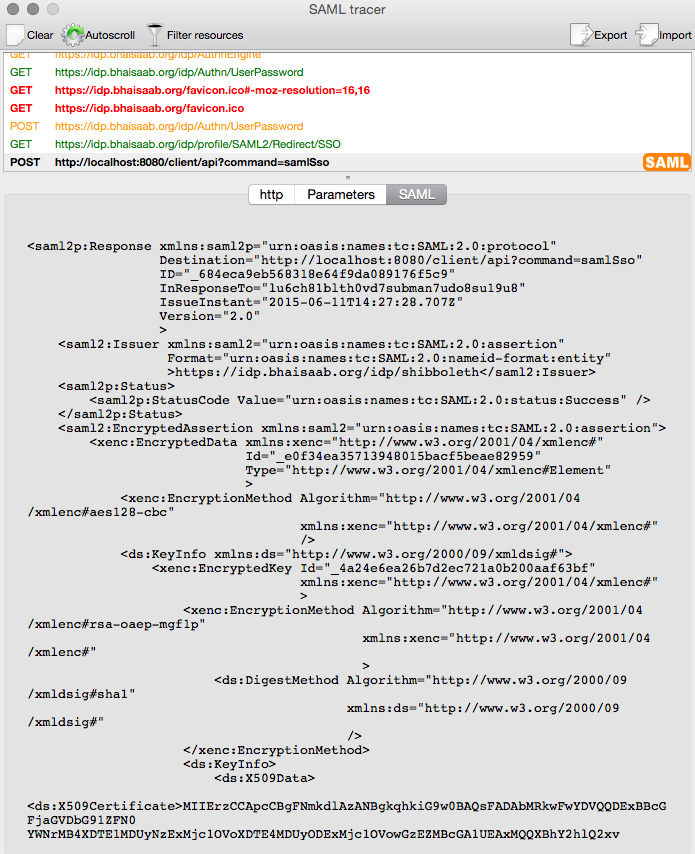 The response ID in the SAML Response is same as the unique ID we generated for the SAML request, this ID can be used to verify from cloud.saml_token table if we generated any authentication response or not, along with the IdP and domain selected if we did request it. Using this information and user attributes parsed from the XML's encrypted or unencrypted attribute nodes, we get the user details (username, domain and IDP name) and if the user is authorized we log in the user by setting appropriate cookies and redirect the browser to CloudStack's UI which checks these cookies and logs in the user. We return error, in case the user is found to be not authorized i.e. either the user was not SAML enabled or not enabled for the specific IdP or just does not exist in the chosen domain.

it consists of   Using saml_token table, we can know if a user wants to access a specific domain upon successful log in, this is useful in case a user has multiple user account with same "username" across several domains. The saml_token table can be flushed after a timeout period.

The SAML IDP metadata of the IDP/Shibbotleth server can be accessed from: https://idp.bhaisaab.org/idp/shibboleth

The SAML SP metadata can be accessed from CloudStack: http://localhost:8080/client/api?command=getSpMetadata