FLIP-58 adds the support for Python UDFs, but user-defined metrics have not been supported yet. With metrics, users can report and monitor the UDF status to get a deeper understanding of the execution. In this FLIP, we want to support metrics for Python UDFs.

The high-level workflow could be summarized as follows: 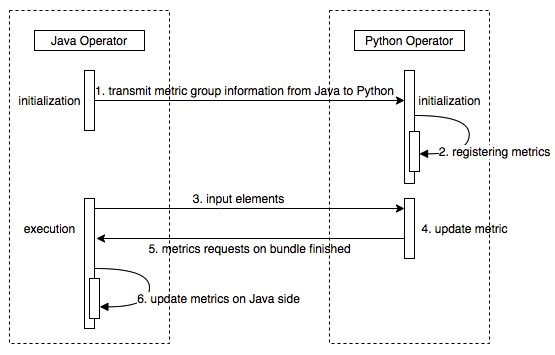 You can access the metric system from any Python UDF that extends `pyflink.table.udf.UserDefinedFunction` in the open method by calling function_context.get_metric_group(). This method returns a MetricGroup object on which you can create and register new metrics.

In this FLIP, we are going to support Counters, Gauges, Meters and Distributions. More details below.

A Counter is used to count something. The current value can be in- or decreased using inc()/inc(n: int) or dec()/dec(n: int). You can create and register a Counter by calling counter(name: str) on a MetricGroup.

A metric that reports the latest value out of reported values. You can register a gauge by calling gauge(name: str, obj: Callable[[], int]) on a MetricGroup. The Callable object will be used to report the values. Gauge metrics are restricted to integer-only values.

A Meter measures an average throughput. An occurrence of an event can be registered with the mark_event() method. The occurrence of multiple events at the same time can be registered with mark_event(n: long) method. You can register a meter by calling meter(name: str, time_span_in_seconds) on a MetricGroup. The default value of time_span_in_seconds is 60.

A metric that reports information(sum/count/min/max/mean) about the distribution of reported values. The value can be updated using update(n: integer). You can register a distribution by calling distribution(name: str) on a MetricGroup. Distribution metrics are restricted to integer-only distributions. Internally, the distribution is implemented by the Flink Gauge as it can report a value of any type.

The definition of scope is the same as Java. You can find more description about scope here. The API of define user scope is as follows:

A MetricGroup is a named container for Metrics and further metric subgroups. Instances of this class can be used to register new metrics with Flink and to create a nested hierarchy based on the group names. A MetricGroup is uniquely identified by it's place in the hierarchy and name.