High Availability(aka HA) is a very basic requirement in production. It helps to eliminate the single point of failure for Flink clusters. For Flink HA configuration, it is necessary to have more than one JobManagers in the cluster, known as active and standby JobManagers. Once the active JobManager failed exceptionally, other standby ones could take over the leadership and recover the jobs from the latest checkpoint. Starting more than one JobManager will make the recovery faster. Benefit from Yarn application attempts or Kubernetes(aka K8s) deployment, more than one JobManagers could be easily started successively or simultaneously.

Currently, Flink has provided Zookeeper HA and been widely used in production environments. It could be integrated in standalone cluster, Yarn, Kubernetes deployments. However, using the Zookeeper HA in K8s will take additional cost since we need to manage a Zookeeper cluster. In the meantime, K8s has provided some public API for leader election and configuration storage(i.e. ConfigMap). We could leverage these features and make running HA configured Flink cluster on K8s more convenient.

Note: Both the standalone on K8s and native K8s could benefit from the new introduced KubernetesHaService.

The first major functionality of Flink high availability is leader election and retrieval(aka service discovery). If we have multiple JobManagers running, they should elect an active one for the resource allocation and task scheduling. Also the RPC endpoint will be stored in a shared storage. Others become standby and wait for taking over. The TaskManagers will retrieve the active JobManager address for registration and offering slots.

Currently, Flink high availability service could be implemented as plugins. In order to enable Flink HA over various distributed coordination systems, interface HighAvailabilityServices have already been abstracted which consists of the following five components. In this way, the implementation directly interacting with specific distributed coordination systems is decoupled with flink's internal logic. For example, ZooKeeperHaServices is the implementation of HighAvailabilityServices based on Zookeeper, and we need to add a similar one based on K8s APIs.

The following are key components of interface HighAvailabilityServices.

Kubernetes provides ConfigMap which could be used as key-value storage. Actually a ConfigMap can store a set of key-value pairs just like a Map in Java. And the values in ConfigMap can be binary data, we can safely serialize/deserialize from java object to/from ConfigMap. However, it is supported after K8s 1.10 version. And in current implementation, i suggest to use base64 to encode the serializedStoreHandle and store in data field.

The size limit of a ConfigMap is 1 MB based on Kubernetes codes (MaxSecretSize = 1 * 1024 * 1024). We should make sure the total size of all the values (including data and binary data) in a ConfigMap should not be greater than 1 MB. So we could only store metadata or dfs location reference in the ConfigMap. The real data needs to be stored on DFS(configured via `high-availability.storageDir`). We will store job graphs, completed checkpoints, checkpoint counters, and running job registry in the ConfigMap.

In ZooKeeperCheckpointIDCounter, Flink is using a shared counter to make sure the “get and increment” semantics. Benefit from the Kubernetes Resource Version, we could perform a similar transactional operation using K8s API. It is used to enable optimistic concurrency for atomic read/update/write operations.

This write only succeeds if the current resource version matches N. This ensures that no one else has snuck in and written a different update while the client was in the process of performing its update.

This will guarantee that Flink state metadata is not updated concurrently and goes into the wrong state in any case.

Based on the resource version, we could easily do a compare-and-swap operation for certain K8s objects. So a leader election could be achieved in the following steps.

Kubernetes Owner Reference is used for garbage collection. When the owner of some K8s resources are deleted, they could be deleted automatically. Benefit from this, in Flink we set owner of the flink-conf configmap, service and TaskManager pods to JobManager Deployment. So when we want to destroy a Flink cluster, we just need to delete the deployment. 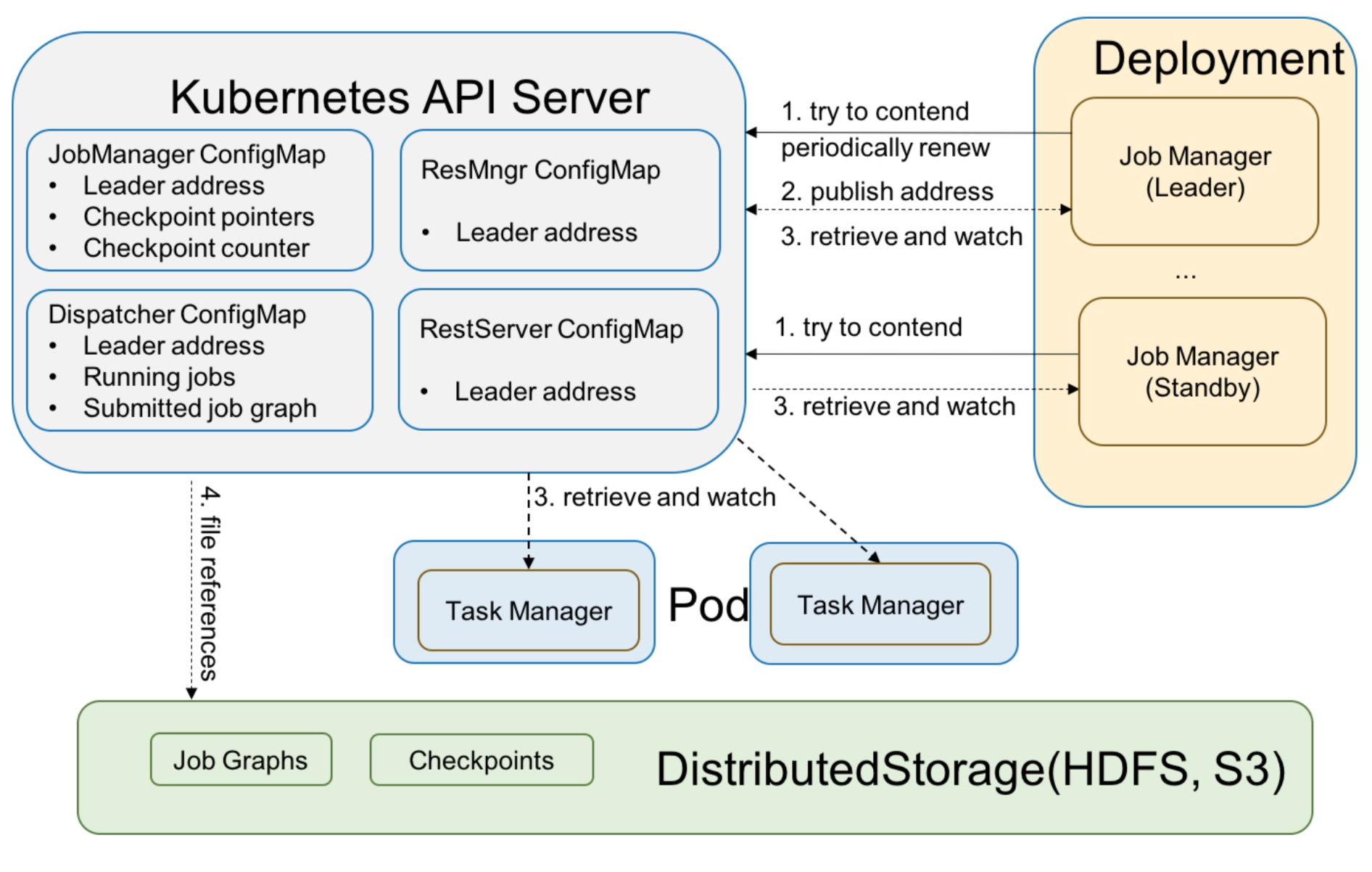 Currently, we already have an embedded fabric8 Kubernetes client in Flink. It is widely used in many projects and works pretty well in Flink. Now it could also support the leader election. The following is a very simple example of how the leader election could be used.

Each component will have a separate leader election service and ConfigMap named with “<ClusterID>-<Component>”. The ConfigMap is used to store the leader information. The following is a list of leader ConfigMaps for a typical Flink application with HA enabled.

A detailed ConfigMap of rest server leader is shown below.

We could create a watcher for the ConfigMap and get the leader address in the callback handler.

Unlike the hierarchical structure in Zookeeper, ConfigMap provides a flat key-value map. So we may need to store multiple keys in a specific ConfigMap. Each component(Dispatcher, ResourceManager, JobManager, RestEndpoint) will have a dedicated ConfigMap. All the HA information relevant for a specific component will be stored in a single ConfigMap. For example, the Dispatcher's ConfigMap would then contain the current leader, the running jobs and the pointers to the persisted JobGraphs. The JobManager's ConfigMap would then contain the current leader, the pointers to the checkpoints and the checkpoint ID counter. Since “Get(check the leader)-and-Update(write back to the ConfigMap)” is a transactional operation, we will completely solved the concurrent modification issues and not using the "lock-and-release" in Zookeeper.

Currently, when a Flink cluster reached the terminal state(FAILED, CANCELED, FINISHED), all the HA data, including Zookeeper and HA storage on DFS, will be cleaned up in `HighAvailabilityServices#closeAndCleanupAllData`. For the KubernetesHAService, we should have the same clean-up behavior.

So the following command will only shut down the Flink session cluster and leave all the HA related ConfigMaps, state untouched.

The following commands will cancel the job in application or session cluster and effectively remove all its HA data.

If the user wants to keep the HA data and restart the Flink cluster, he/she could simply delete the deploy(via `kubectl delete deploy <ClusterID>`). All the Flink cluster related resources will be destroyed(e.g. JobManager Deployment, TaskManager pods, services, Flink conf ConfigMap) so that it will not occupy the K8s cluster resources. For the HA related ConfigMaps, we do not set the owner so that they could be retained. Then he/she could use `kubernetes-session.sh` or `flink run-application` to start the session/application again. All the previous running jobs could recover from the latest checkpoint successfully.

Both session and job/application clusters could use the new introduced KubernetesHaService. We just need to add the following Flink config options to flink-configuration-configmap.yaml. All other yamls do not need to be updated.

The following is a simple sample how to start a Flink application with native HA enabled. The config options are same for the Flink session cluster.

This is a complete new feature. We will not have any compatibility, deprecation, migration issues. Just like the command in the previous section, users could use this new feature via simply adding a few Flink config options.

Unlike Zookeeper, we do not have a TestingServer in the fabric8 Kubernetes client. So we just need to mock the dependency component and test the contract.

Fortunately, we could use minikube for the E2E tests. Start a Flink session/application cluster on K8s, kill one TaskManager pod or JobManager Pod and wait for the job recovered from the latest checkpoint successfully.

Moreover, we need to test the new introduced KubernetesHaService in a real K8s clusters.

Kubernetes StatefulSet could guarantee that there will never be more than 1 instance of a pod at any given time, which is different from a deployment. So it is quite appropriate to replace the leader election/retrieval. For the TaskManagers, the unique pod name “<ClusterID>-jobmanager-0” could always be used to reach to the JobManager.

Note: An except is manually force-deletion. If a Kubernetes node is down, and the user perform a force-deletion for the StatefulSet pod. We may have two running JobManagers then.

Kubernetes Persistent Volume(PV) has a lifecycle independent of any individual Pod that uses the PV. It could make Flink JobManager keep the local data after failover. So we just need to mount a PV as local path(e.g. /flink-ha) for the JobManager pod and set the high availability storage to the local directory. The job graph, running job registry, completed checkpoint and checkpoint counter also need to be stored in the local directory.

FileSystemHAService is a new added simple high availability service implementation. It does not provide leader election/retrieval functionality. Unlike ZookeeperHAService and KubernetesHAService, it directly stores/recovers the HA data to/from local directory.

This HA solution is quite straightforward and could be implemented easily. However, the limitations are also quite obvious. First, it requires the Kubernetes cluster should have pre-configured PV, which is not always true especially in the unmanaged(self-built) cluster. Second, we could not support multiple JobManagers instances since we do not have an embedded leader election/retrieval service. Third, we need to change the current JobManager Deployment to StatefulSet.

In the future we could have both solutions for deploying Flink on K8s with HA enabled. And they could be used to different scenarios.

However, we could not find an existing similar mechanism in Kubernetes. The ETCD does not support ephemeral key. So we need to do this in Flink. First, when we want to lock a specific key in ConfigMap, we will put the owner identify, lease duration, renew time in the ConfigMap annotation. The annotation will be cleaned up when releasing the lock. When we want to remove a job graph or checkpoints, it should satisfy the following conditions. If not, the delete operation could not be done.