In Flink 1.2.0, NormalizedKeySorter is used during sort-approach operations regardless of the type of sorting key and execution environment. As a result,  in some situations, more efficient operations can be used instead of generic ones. One of examples is Unsafe.copyMemory that allows Flink to copy memory in any length, however, it checks memory alignment first before actually copying. Thus, it consumes unnecessary CPU cycles when copying data that we already know it always fit into memory segment, such situation is swapping 2 records during sorting. Here, we can leverage knowledge of sorting key from TypeComparator and generate custom fixed-byte operators to manipulate those records instead of using copyMemory. Based on the same knowledge, we can also unroll loop during key comparison as well as remove unnecessary branching if key can fully determined sort order.

Execution environment is also important aspect that we can leverage. Because Flink serializes the key of a record to MemorySegment in big-endian format regardless endianness of the worker, when retrieving it back for comparison it need to reverse the bytes first. In this case, we compensate this at serialization process in which we will need to do byte-reversing only once for each record instead of every comparison. This means that the number of byte-reversing will become O(n) instead of O(n log n).

These optimizations are studied in FLINK-4867 and the results are promising.

Table 1 : Comparison between optimization ideas from FLINK-4867 and original NormalizedKeySorter

Another potential improvement could be eliminating expensive mathematical operators such as division and modulo, for example, when computing memory segment index.  One proposed solution that trying to improvement this problem is  Greg Hogan ’s FLINK-3722. Another possible ones could be using bitwise operators or replacing divisors with a constant that we know at compile-time [1]. From our experiment, we have found that Greg's solution is the best one, so we will base our implementation on his pull-request.

Table 2 : Comparison between 3 approaches of optimization for division and modulo

Because these optimization techniques depend on knowledge of each execution context, for example, data-type of sorting key and endianness of machine, we would need to apply applicable optimizations on the fly. In other words, we will dynamically generate the most efficient sorter for each context on each worker.

In this proposal, we plan to use 2 external libraries that are the same as FLINK-3599 : Code Generation in Serializers is using, namely

We plan to abstract these functionalities from Flink code. We will create 3 new classes and 1 template file to accomplish that.

SorterFactory : responsible for instantiating a sorter object. It is an interface between core flink and code generation processes.

SorterTemplateModel : responsible for constructing suitable code String of each optimizing section in a template file. These Strings will be exposed via getTemplateVariables() to TemplateManager.

Based on number of bytes of the sorting key from typeComparator and record pointer(8 bytes), this method splits the bytes into fixed-byte chunks.

Generate a sequence of MemorySegment’s fixed-byte operators to swap 2 records.

Due to the fact that Flink serializes records into big-endian format, it needs to reverse bytes when retrieving 2 records to compare on little-endian machine. Hence, in this case, it is more efficient to move byte reversing to serialize process instead. In essence, this method generates a sequence of operators to reverse bytes after writing a record to a MemorySegment for little endian machine.

Generate a sequence of MemorySegment’s fixed-byte operators to retrieve keys of 2 records for unsigned comparison. If the key is not fully determined order, add compare record operators to the sequence, otherwise just “return 0”.

This method returns HashMap of the generated sequences for each section in NormalizedKeySorter. This is consumed by TemplateManager.

TemplateManager : responsible for generating source code file if it hasn’t been created yet.

Use templateModel.getTemplateVariables to render the corresponding blocks in “sorter.ftlh” template and store it at “taskmanager.temp.dirs” 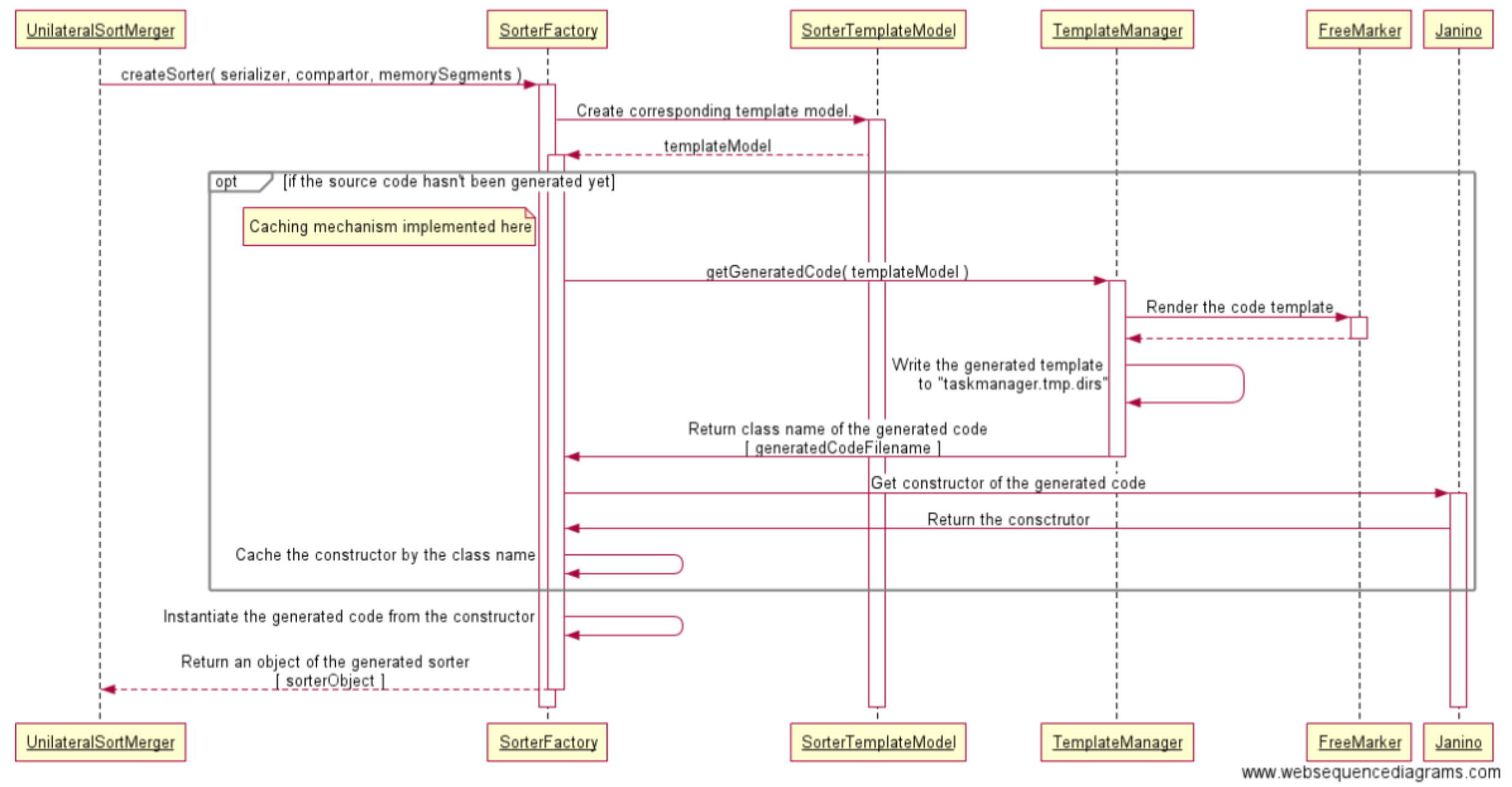 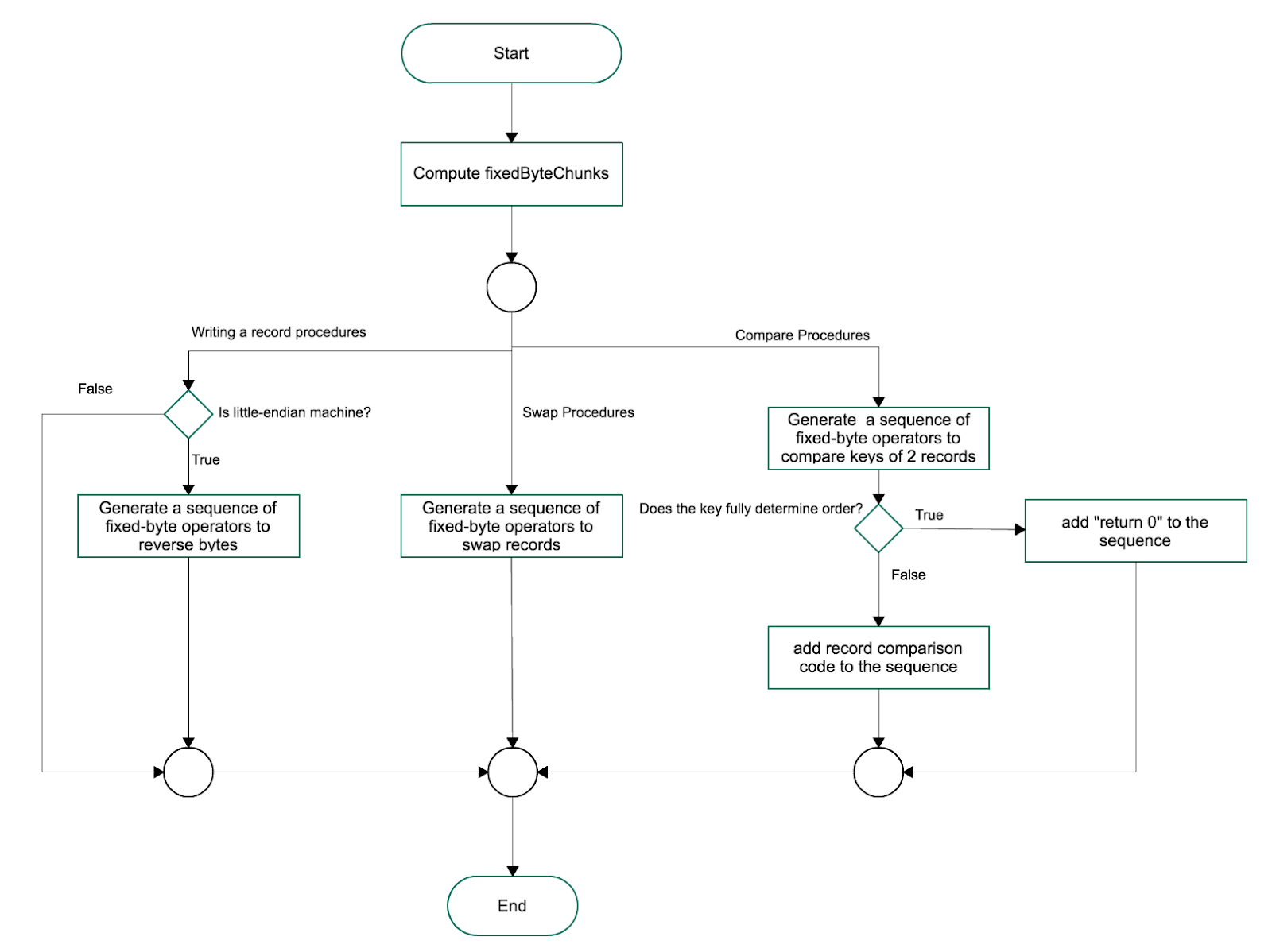 This change should not affect Flink’s functionalities, but It might have small impact on job startup time. More accurate result will be provided later. Also, we will introduce a configuration option that can be used to enable or disable this code generation feature.

We will test the correctness by creating several models and generating corresponding code and then verify whether the generated code sorts the data properly.