Currently, Flink has supported Kubernetes as a backend resource provider for a long time. And it has a well-known performance, but we still need to improve it at that point and fully match the ability of Kubernetes, such as the customized resource scheduler, that means users can modify the resource scheduling more to match their real requirement.

The current development trend of Flink supports unified stream and batch processing. Therefore, more optimization methods are required for unified batch and stream scenarios. It is especially necessary to use the existing or extending ability of K8S to solve the performance and application problems during Flink in batch & stream processing. Such as job scheduling, resource queuing, Gang scheduling(Batch processing), etc. But the default scheduler of K8S only supports the basic Pod-based scheduling, so K8S leaves an opportunity to developers to enable customized K8S schedulers [1] to make the deployment closer to their business deployments.

Currently, there are several graduated schedulers, such as CNCF volcano. Users can add this kind of customized scheduler natively and help them run their jobs in Flink on K8S more easily and efficiently. Such as:

Currently, there are more and more requirements from customers about how to control the Flink jobs like YARN. Such as a Flink cluster admin in a production environment, he/she wants to leverage the whole Flink Jobs in cluster based on the existing compute resources, ,verify the left resources could fit the following planned Flink jobs and execute the jobs according to the defined queue priorities. After all, the customers have stronger requirements to control the resource reservation.

Let’s take some simple examples to describe what we want to propose.

1 . Job based scheduling and resource reservation

Job based scheduling is very useful for multi-task applications which require scheduling a group of tasks simultaneously. This is a common requirement for data processing workload such as machine learning, Big Data and HPC.

In short, we propose to couple the JM and TM pods into a single group to perform job based scheduling and resource reservation for TM to avoid the deadlock issue that JM occupies all the resources and TM  has no chance to get any resource. The scheduler reserves resources for TM and won’t schedule overcommit pods if the idle can not fit all following TM pods setup. 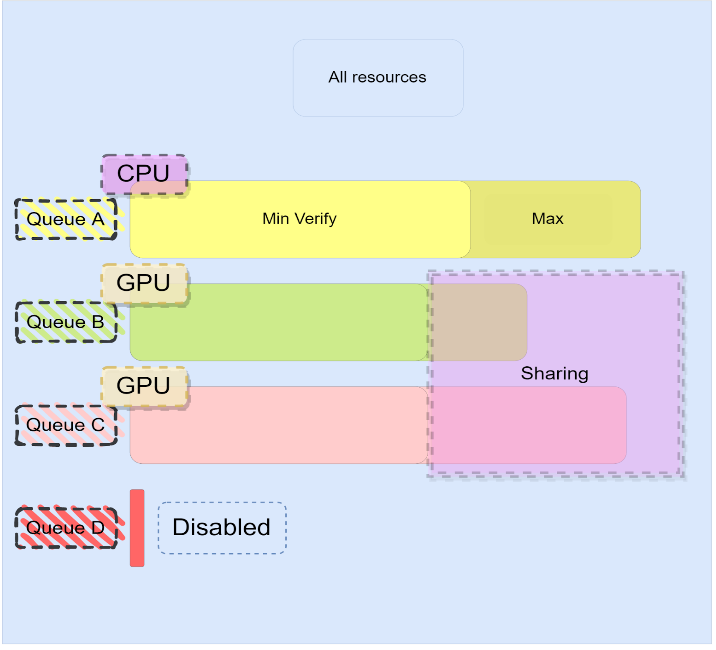 When running several elastic jobs, e.g. Streaming, it's better to allocate resources to each job fairly to meet their SLA/QoS when multiple jobs are competing for additional resources. In the worst case, a single job could launch a large number of Pods with low resource utilization, preventing other jobs from running due to insufficient resources. To avoid overly small allocations (e.g. launch one Pod for each job), elastic jobs can leverage co-scheduling to define the minimal available number of Pods that should be started. Any Pods beyond the specified minimal available amount will share cluster resources with other jobs fairly. 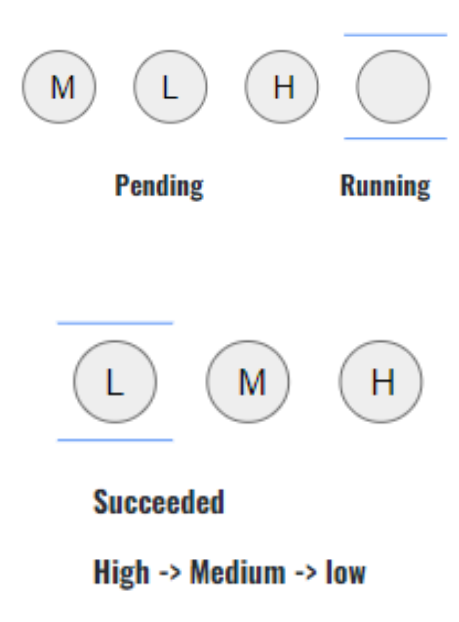 We will introduce the whole feature in 2 steps. The first step is making Flink support K8S customized scheduler mechanism. Then we will introduce a reference implementation “Volcano” in Flink. And in the following description, we will use “Volcano” to take an example.

Allow users to specify any customized scheduler to Flink pods or any pods setup by K8S cluster deployment.

K8S provides a field “schedulerName” in pod spec or deployment.

So for this step, we need to introduce an new configure settings when we setup Flink cluster on K8s, such as:

By setting the customized scheduler name in deployment and pod spec to control Flink JobManager,TaskManager and associated executor pods using the K8S scheduler specified by users.

2.  Need another settings to specify the necessary information to the customized k8s scheduler for Flink JobManager and TaskManager Pods.

This kind of necessary info can be used by the customized scheduler such as Volcano and others which follow the K8S PodGroup scheduling concepts for batch jobs. So that means we need to specify the necessary info also while we are setting up the Flink cluster. Parts of above information are provided in K8S resource annotations or K8S CRD. In current Flink K8S design, Flink already allows users to pass the customized annotations, so that they match our proposal already.

But those are the basic functions about the new proposal. We still need to analyze the current cluster deployment and the pod group use cases.

The option value is a map, and will be loaded by the specified customized scheduler.

Additional K8S customized configuration proposal, such as PodGroup in Volcano:

3. Need the ability of preparing K8S resource before JobManager creation

For applying the customized schedulers functionality or making Flink K8S more flexible, we need to make Flink to provide an ability to prepare the K8S resource before we actually set up the Flink components.

In current Flink K8S design, it provides buildAccompanyingKubernetesResources interface to add the resources from decorators, the mentioned AccompanyingKubernetesResources will be created after the JobManager Deployment creation. But some K8S Pod-related customized schedulers might need an extension K8S resource to control the real scheduling before the target Pods setup. On the other hand, we only make an example about the customized scheduler which only worked before the Pod creation, we can not imagine all customized schedulers works like that, so we can make the existing JobManager deployment create processing more common. 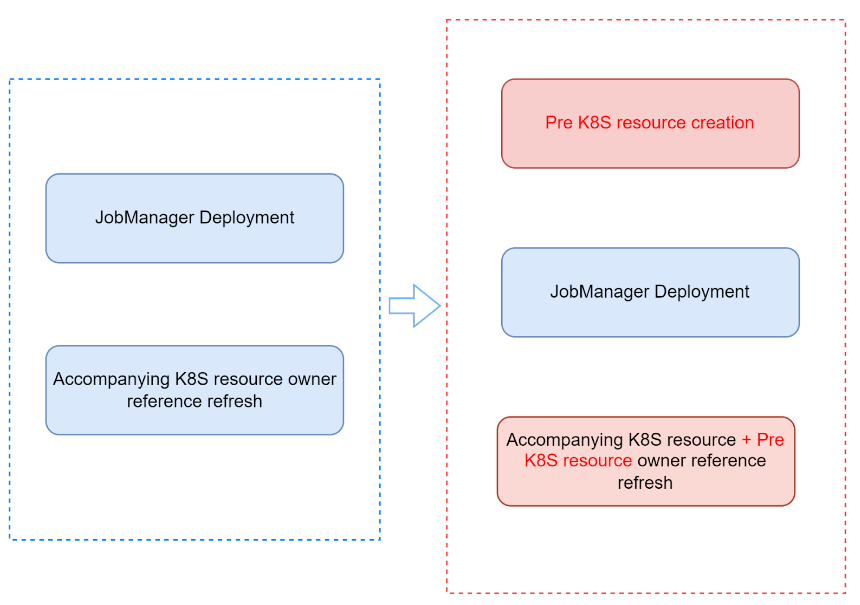 Flink K8S component uses Fabric8 to manage the K8S resources, so to apply the new functionality from K8S and its new customized schedulers, we need to upgrade the existing K8S Fabric8 version to v5.12.2 at least.

We propose using SPI or Flink plugins mechanism to load the external decorators. In this way, we can make Flink more flexible towards supporting the decorators of customized K8S schedulers.

Below will be associated with Volcano and only introduce a reference implementation in Flink. 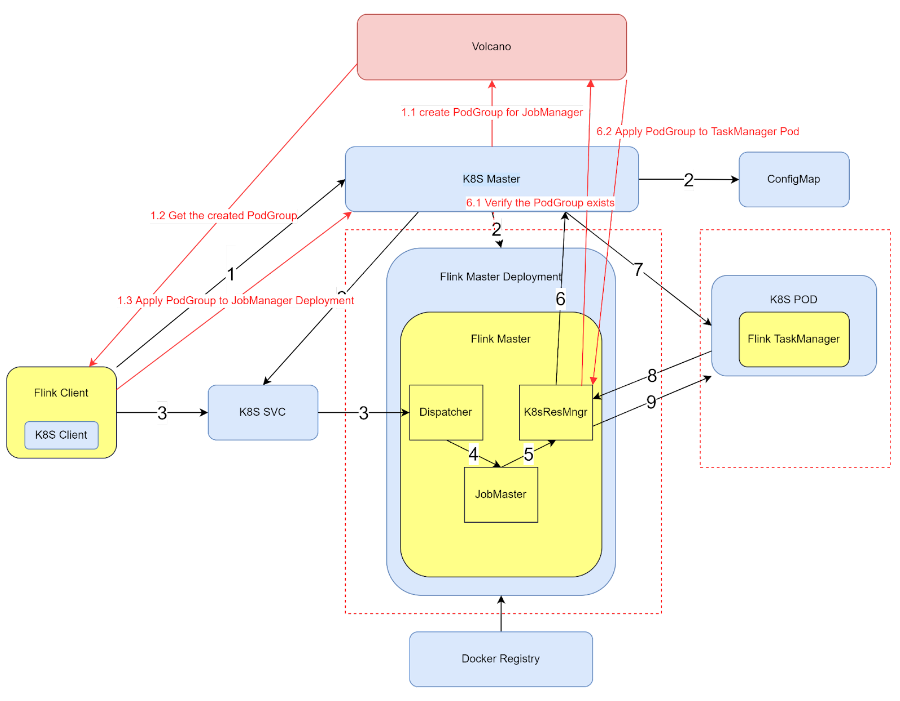 The implementation of Volcano, we plan to introduce a new decorator for Volcano. But before that, we need to introduce its dependency first. The desired Use way is, when Flink users/adminstors download the Flink release packages, Volcano decorator and its dependency will be packaged as a separate jar in Flink opt directory. If they want to use the functionality we proposed on K8S, the steps need to be done as following. they need to copy&paste the said Volcano jar package into the Flink jar packages loading path.

2. Create a new directory into plugins directory with a good name.

4. Submit the flink job with the specified volcano scheduler name and its specific option, such as

Then the Flink Kubernetes will load the plugin automaticlly, and setting the volcano related configuration according your inputs.

Once we introduce the said dependency, Flink code could operate the PodGroup as same as the K8S native resources.

Before we explain the details of volcano StepDecorator, we’d better go through what we need to introduce.

Below is the PodGroup definition, the PodGroup should be prepared before the JobManager deployment. What we need to be concerned are:

PodGroup.metadata: It defines the name and owner reference of PodGroup. In Particular, we will use the PodGroup name to associate the following K8S resource, such as TaskManager Pod.

Below is the TaskManager associated PodGroup.

The major idea is associating the PodGroup with JobManager and its related TaskManagers, it is a JobManager based PodGroup scheduling. We will analyze the 2 common deployment types in K8S cases with the enabled Volcano customized scheduler.

The PodGroup and Queue associated with the existing Deployment and Pod are very simple, but we need to consider the life cycle of PodGroup/Queue.

Queue: We keep the same behavior like YARN Queue in Flink, we only access the user input for the Queue Name, and users need to configure the Queue in K8S first, then specify the Queue Name into PodGroup during job submission.

PodGroup: Flink needs to maintain the whole lifecycle when users only specify the customized Pod Scheduler Name to JobManager and TaskManager. And users won’t be awared the said PodGroup. For example, if users specify “volcano”, Flink needs to create the PodGroup automatically.

b. Life cycle of PodGroup in application deployment:

Creation: Make the PodGroup creation as an additional resource when creating JobManager deployment or TaskManager Pod. And the name should be based on the K8S Flink application cluster-id, which is heavily related with the Flink Application.

Deletion: When creating the said PodGroup, we need to update its OwnerReference to the said cluster-id deployment, so it can be cleaned by the K8S recycling mechanism. Flink won’t delete the PodGroup which are not created by Flink.

Creation: Make the PodGroup creation as an additional resource when creating JobManager deployment or TaskManager Pod. And the name should be based on the K8S Flink session cluster-id.

Deletion: When creating the said PodGroup, we need to update its OwnerReference to the said cluster-id deployment, so it can be cleaned by the K8S recycling mechanism.

All of aboves are the major ideas of the whole design.

Volcano is a Kubernetes native batch system for big data and high-performance workloads. This has now been accepted by the Cloud Native Computing Foundation (CNCF) as its first and only official container batch scheduling project. There was also a volcano integration experience with Spark, which is Spark K8S operator.

Volcano is set up at Kubernetes cluster level, when a user submitting a Flink application, the user needs to tell Kubernetes the job requirement like queue/priority/min resource.

The PodGroup concept was firstly approved by the Kubernetes community in KEP-583 Coscheduling. PodGroup is a group of pods with strong association and is mainly used in batch scheduling.

In Volcano, Queue is a collection of PodGroups, which adopts FIFO. It is also used as the basis for resource division.

Coupled with PodGroup and Queue brings more possibilities to use Pods-based deployment.