There are several key aspects in the design, which are discussed in each section. The discussion helps understand the public interface better.

The sources have two main components:

The SplitEnumerator is similar to the old batch source interface's functionality of creating splits and assigning splits. It runs only once, not in parallel (but could be thought of to parallelize in the future, if necessary).
It might run on the JobManager or in a single task on a TaskManager (see below "Where to run the Enumerator").

The Reader reads the data from the assigned splits. The reader encompasses most of the functionality of the current source interface.
Some readers may read a sequence of bounded splits after another, some may ready multiple (unbounded) splits in parallel.

With these two components encapsulating the core functionality, the main Source interface itself is only a factory for creating split enumerators and readers.

Each source should be able to work as a bounded (batch) and as an unbounded (continuous streaming) source.

The Boundedness is an intrinsic property to the source instance itself. In most cases, only the SplitEnumerators should know the Boundedness, while the SplitReaders are agnostic.

That way, we can also make the API type safe in the future, when we can explicitly model bounded streams.

The SplitEnumerator and SourceReader are both user implemented class. It is not rare that the implementation require some communication between these two components. In order to facilitate such use cases. In this FLIP, we introduce a generic message passing mechanism between the SplitEnumerator and SourceReader. This mechanism require an additional RPC method pair in the JobMasterGateway and TaskExecutorGateway. The message passing stack could be illustrated below.

The reader need to fulfill the following properties:

The following core aspects give us these properties:

The SourceReader will run as a PushingAsyncDataInput which works well with the new mailbox threading model in the tasks, similar to the network inputs.

Base implementation and high-level readers

The core source interface (the lowest level interface) is very generic. That makes it flexible, but hard to implement for contributors, especially for sufficiently complex reader patterns like in Kafka or Kinesis.
In general, most I/O libraries used for connectors are not asynchronous, and would need to spawn an I/O thread to make them non-blocking for the main thread.

We propose to solve this by building higher level source abstractions that offer simpler interfaces that allow for blocking calls.
These higher level abstractions would also solve the issue of sources that handle multiple splits concurrently, and the per-split event time logic.

Most readers fall into one of the following categories:

Most of the readers implemented against these higher level building blocks would only need to implement an interface similar to this. The contract would also be that all methods except wakeup() would be called by the same thread, obviating the need for any concurrency handling in the connector.

The RecordsWithSplitIds returned by the SplitReader will be passed to an RecordEmitter one by one. The RecordEmitter is responsible for the following:

With the base implementation users writing their own source can just focus on:

The base implementation can be roughly illustrated below: 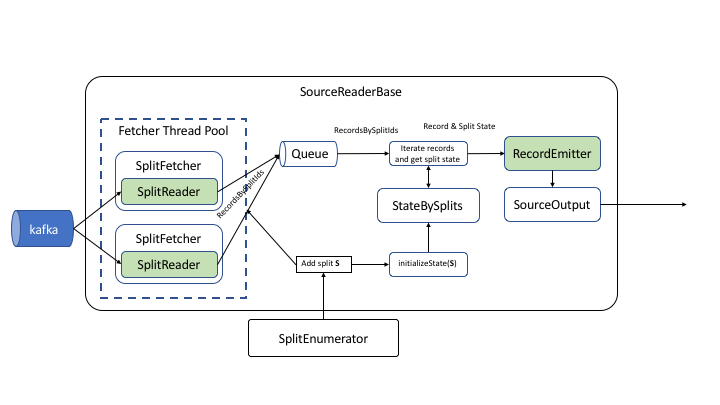 The state of the SplitEnumerator includes the following:

The state of the SourceReader includes:

Where to run the enumerator

There was a long discussion about where to run the enumerator which we documented in the appendix. The final approach we took was very similar to option 3 with a few differences. The approach is following.

With the introduction of the SourceSplit, we can actually emit per split event time for the users. We plan to propose the solution in a separate FLIP instead of in this FLIP to reduce the complexity.

The event time alignment becomes easier to implement with the generic communication mechanism introduced between SplitEnumerator and SourceReader. In this FLIP we do not include this in the base implementation to reduce the complexity.

The public interface changes introduced by this FLIP consist of three parts.

Public interface from base Source implementation

The following interfaces are high level interfaces that are introduced by the base implementation of Source.

The implementation should proceed in the following steps, some of which can proceed concurrently.

We do not touch the DataSet API, which will be eventually subsumed by the DataStream API anyways.

Unit test and integration test for each implementations.

Appendix - Where to run the enumerator

The communication of splits between the Enumerator and the SourceReader has specific requirements:

Given these requirements, there would be three options to implement this communication. And

Option 1: Enumerator on the TaskManager

The SplitEnumerator runs as a task with parallelism one. Downstream of the enumerator are the SourceReader tasks, which run in parallel. Communication goes through the regular data streams.

The readers request splits by sending "backwards events", similar to "request partition" or the "superstep synchronization" in the batch iterations. These are not exposed in operators, but tasks have access to them.
The task reacts to the backwards events: Only upon an event will it send a split. That gives us lazy/pull-based assignment. Payloads on the request backwards event messages (for example for locality awareness) is possible.

Checkpoints and splits are naturally aligned, because splits go through the data channels. The enumerator is effectively the only entry task from the source, and the only one that receives the "trigger checkpoint" RPC call. 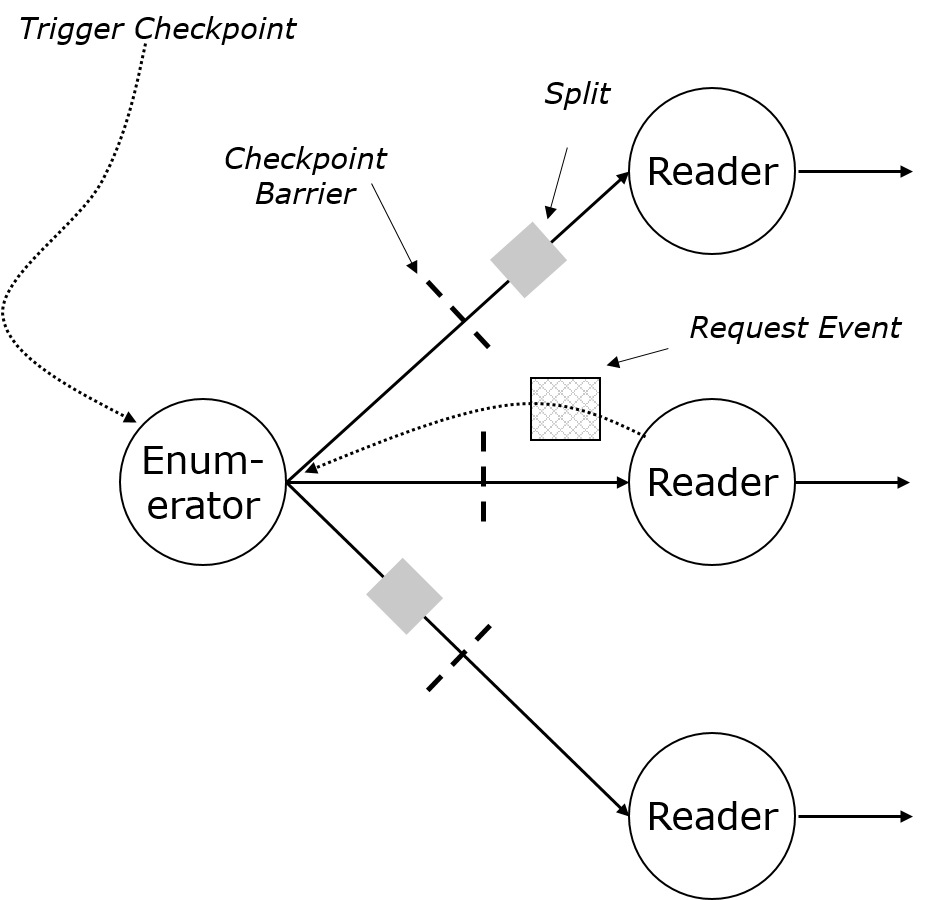 The network connection between enumerator and split reader is treated by the scheduler as a boundary of a failover region.

To decouple the enumerator and reader restart, we need one of the following mechanisms:

Option 2: Enumerator on the JobManager

Similar to the current batch (DataSet) input spit assigner, the SplitEnumerator code runs in the JobManager, as part of an ExecutionJobVertex. To support periodic split discovery, the enumerator has to be periodically called from an additional thread.

The readers request splits via an RPC message and the enumerator responds via RPC. RPC messages carry payload for information like location.

Extra care needs to me taken to align the split assignment messages with checkpoint barriers. If we start to support metadata-based watermarks (to handle event time consistently when dealing with collections of bounded splits), we need to support that as well through RPC and align it with the input split assignment.

The enumerator creates its own piece of checkpoint state when a checkpoint is triggered.

Critical parts here are the added complexity on the master (ExecutionGraph) and the checkpoints. Aligning them properly with RPC messages is possible when going through the now single threaded execution graph dispatcher thread, but to support asynchronous checkpoint writing requires more complexity.

If user specifies RestartAllStrategy as the failover strategy, Flink restarts all tasks and SourceCoordinator when a task fails. All tasks and Enumerators are restarted and restored from last successful checkpoint.

If user specifies RestartPipelinedRegionStrategy as failover strategy, it’s a little complicated. There is no failover region problem in this model, since there is no execution edge between Enumerator and SourceReader (SourceCoordinator is not a port of ExecutionGraph). We need to explain it separately.

CheckpointCoordinator should notify Enumerator that checkpoint has been completed. So Enumerator could prune the map kept in memory and the write-ahead log.

In both cases, the enumerator is a point of failure that requires a restart of the entire dataflow.
To circumvent that, we probably need an additional mechanism, like a write-ahead log for split assignment.

Personal opinion from Stephan:  If we find an elegant way to abstract the network stack changes, I would lean towards running the Enumerator in a Task, not on the JobManager.

We propose a new Source interface along with two companion interfaces SplitEnumerator and SplitReader:

The Source interface itself is really only a factory for creating split enumerators and split readers. A split enumerator is responsible for detecting new partitions/shards/splits while a split reader is responsible for reading from one split. This separates the concerns and allows putting the enumeration in a parallelism-one operation or outside the execution graph. And also gives Flink more possibilities to decide how processing of splits should be scheduled.

A naive implementation prototype that implements this in user space atop the existing Flink operations is given here: https://github.com/aljoscha/flink/commits/refactor-source-interface. This also comes with a complete Kafka source implementation that already supports checkpointing.

The next steps would be to implement event-time alignment.