At the Flink API level, we have DataStreamAPI/DataSetAPI/TableAPI&SQL, the Table API will become the first-class citizen. Table API is declarative and can be automatically optimized, which is mentioned in the Flink mid-term roadmap by Stephan. So, first considering supporting Python at the Table level to cater to the current large number of analytics users. So this proposal will cover the following items:

Introduces a set of Python Table API which should mirror Java / Scala Table API, i.e. the interfaces should including such as Table, TableEnvironment, TableConfig, etc.

We will offer two alternative architecture options, one for pure Python language support and one for extended multi-language design(long-term goals).

We need to add components in FLINK JIRA as follows:

We don't develop python operators like `flink-python` and `flink-stream-python`. To get the most out of the existing Java/Scala results (the Calcite-based optimizer), the Python Table API only needs to define the Python Table API interface.  Calls to the existing Java Table API implementation to meet the needs of python users with minimal effort. So our main job is to implement communication between Python VM and Java VM, as shown below:

Currently, we have two options for the implementation of RPC.

For Python API, a very mature solution is to choose Py4J as shown below:

At Python Side, Py4J provides a JavaGateway object. It has a field “jvm” which enables Python program to access the Java classes directly. We can construct the Python wrappers for the Java classes through it.

At the Java side, Py4J provides GatewayServer. It receives the Python API requests and we can use it to delegate all the method calling of the Python API to the corresponding Java/Scala Table API.

There will be Python wrappers for all the API classes such as TableEnvironment, Table, TableSink, TableSource, Catalog, etc.  For example:

Currently, we want to add Python Table API, And in the future, we may want to support the other popular Non-JVM language based Table API, such as R, Go, etc. So we can also have a more scalable approach, as follows: 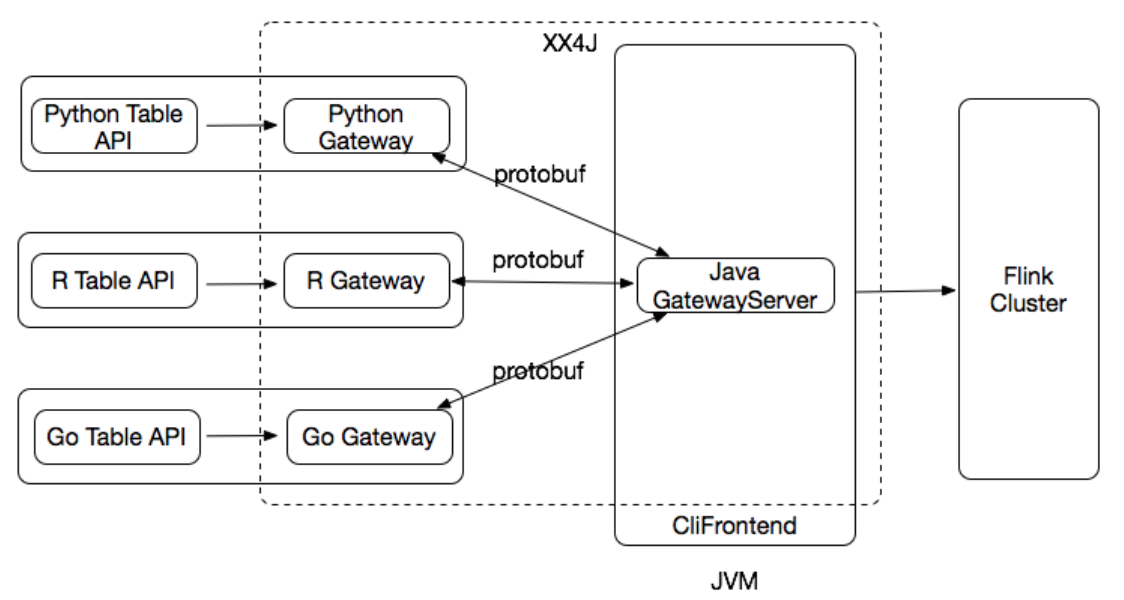 In this approach, we can replace Py4J with a similar component(suppose named XX4J) which can support all kinds of languages besides Python as the bridge between the client language Table API and Java Table API. From the architecture graph above, we can see that a language-neutral transportation layer (such as protobuf) makes it easy to support new kinds of languages as the Table API.

But by now, Python and Java communication mechanism undoubtedly choose Py4J is the most mature and lowest cost solution. I also do a POC using Py4J. So for the API level, we make the following plan：

We may initially go with a simple approach to map the Python Table API to the Java Table API via Py4J.

We may need to create a Python API that follows the same structure as Flink's Table API that produces the language-independent DAG. (As Stephan already motioned on the mailing thread)

There are a lot of Descriptor related classes, we will take Csv as an example:

Create a python directory in the published opt directory. The contents of python are as follows:

The detail can be found in the Job Submission section.

Let's take a word count as an example to provide a example. The Python Table API will look like the following :

On the basis of the current `run` ACTION, we add to Python Table API support, specific OPTIONS are as follows:

Python script with the program entry point. We can configure dependent resources with the `--py-files` option.

Attach custom python files for job. Comma can be used as the separator to specify multiple files. The standard python resource file suffixes such as .py/.egg/.zip all also supported.

The Python binary to be used.

The execution environment: process or docker.

The docker image to be used to run the python worker. Valid when the option of “-py-env” is docker.

NOTE: When options `py` and `pym` appear at the same time, option `py` will be valid.

We can submit the Python Table API jobs as follows:

Regarding the [ARGUMENTS] section of syntax, we reuse existing features without any extensions.

The main goal of Flink Python Shell is to provide an interactive way for users to write and execute flink Python Table API jobs.

By default, jobs are executed in a mini cluster (for beginner users to learn and research). If users want to submit jobs to a cluster, they need to configure additional parameters, such as the execution mode or the JobMaster address (standalone cluster), just like Flink Scala Shell.

The Python shell is responsible for confirming the location of the flink files, loading required dependencies and then executing the shell initialization logic.

The initialization procedure will import all the Flink Python Table API classes which should be exposed to the user.

Currently we have a complete set of REST APIs that can be used to submit Java jobs(https://ci.apache.org/projects/flink/flink-docs-release-1.8/monitoring/rest_api.html). We need to make some changes to the current REST API to support submitting Python Table API jobs:

We can firstly deprecated the old REST APIs and remove them in one or two releases.

This FLIP proposes are Flink Table's new support for the Python language. We will add a Python-related module, Introduces a set of Python Table API which should mirror Java / Scala Table API, and Job Submission, etc. And we will add checks for all of the changes.

This FLIP proposes new functionality and operators for the Python Table API. The behavior of existing operators is not modified.

This FLIP proposes can check by both It test case and validate the test case.

Future or next step

Regarding the API, we can adopt a scheme similar to the Beam community, that is, we may need to create a Python API that follows the same structure as Flink's Table API that produces the language-independent DAG. This approach needs to do a lot of cooperation with the beam community and it as a solution for the long-term goals.