Currently, keyed streams are widely used to perform aggregating operations (e.g., reduce, sum and window) on the elements that have the same key. When executed at runtime, the elements with the same key will be sent to and aggregated by the same task.

Local aggregation is a widely-adopted method to reduce the performance degraded by data skew. We can decompose the aggregating operations into two phases. In the first phase, we aggregate the elements of the same key at the sender side to obtain partial results. Then at the second phase, these partial results are sent to receivers according to their keys and are combined to obtain the final result. Since the number of partial results received by each receiver is limited by the number of senders, the imbalance among receivers can be reduced. Besides, by reducing the amount of transferred data the performance can be further improved.

Note that to achieve the benefits brought by local aggregation, it’s required that the aggregated results can be easily obtained with decomposition and combination. The condition is satisfied by many common aggregating operations, e.g., sum, count and topN. Few other aggregating operations, like cardinality, cannot be easily decomposed and combined, hence will not benefit from the usage of local aggregation.

A few APIs to support local aggregation need to be added to DataStream class, list below:

The usage of the API, please see the examples: 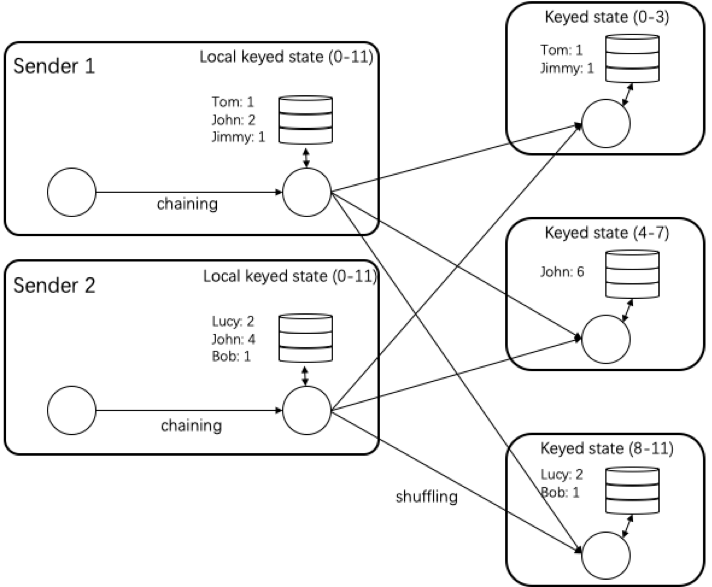 A task may be assigned multiple local key groups with the same id at restoring. These instances should be merged to construct the new key group.

The merging of list states is quite straight-forward. We can simply merge two list states of the same key by appending the elements of one list state to the other one.

A solution at first thought is to save these user-defined functions in checkpoints. To be backward compatible, this solution will require a different metadata format for the snapshots of local keyed states.

We can also perform lazy merging to avoid the need for the saving of user-defined functions. When restoring from checkpoints, we keep the values from different key group instances in a list and perform merging when they are accessed. That way, local keyed states, and keyed states can share the same metadata format.

Since all operator on local keyed streams are performed locally, these operators must be chained with their inputs. So we disabled some transform APIs, they are connect / join / intervalJoin / coGroup. Like ForwardPartitioner, we will check the parallelism of upstream and downstream nodes of LocalKeyGroupStreamPartitioners when generating stream graphs. Exceptions will be thrown if their parallelism are not equal.

When generating job graphs, the operators will be chained with the inputs if the partitioner is typed LocalKeyGroupStreamPartitioner.

Besides the selector and the serializer for keys, the scope for key partitioning will also be written in the operator’s configuration. The scope can help the operator know it is performed in a keyed stream or a local keyed stream.

The materializing of local keyed states is also similar to that of keyed states, hence can share the same code.

When recovering from failures, the checkpoint coordinator will distribute the state handles of local keyed states to tasks according to the method described in Section 2.1.

The total implementation can be split into a few subtasks(steps):

In section 3, we described our design based on Flink state. When discussed in the mailing thread, there are also some good suggestions. For example, introduce a stateless operator for local aggregation can provide better performance in some particular scenarios. The stateless operator would buffer the intermediate results and flush them during `StreamOperator::prepareSnapshotPreBarrier()`.

Supporting both two kinds of implementation is valuable, we can get benefit from different scenarios. In our original implementation, we reused window operator (a stateful operator) and window relevant APIs so that we can reuse some Flink concepts and flexible user interfaces. So we need to give a unified abstraction for both implementations.

This feature is biased towards optimization, so there are no compatibility-related issues.

All relevant changes are verified by unit tests, and if possible, we will try to write integration tests to verify it.