(1) Different configuration for Streaming and Batch.

(2) Complex and difficult configuration of RocksDB in Streaming

(3) Complicated, uncertain and hard to understand

The basic idea is to consider memory used by RocksDB state backends as part of managed memory, and extend memory manager so that memory consumers can simply reserve certain amount of memory from it but not necessarily allocate the memory from it. In this way, users should be able to switch between streaming and batch jobs, without having to modify the cluster configurations. 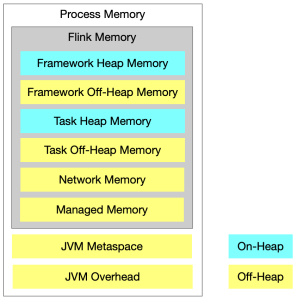 On-heap memory for the Flink task manager framework. It is not accounted for slot resource profiles.

Off-heap memory for the Flink task manager framework. It is not accounted for slot resource profiles.

Coarser config option for everything, to make it easily configurable for users.

We need either of these three options configured.

The following logic describes how to derive these values from another.

Introduce a temporal config option as a switch between the current / new task executor memory configuration code paths. This allows us to implement and test the new code paths without affect the existing code paths and behaviors.

This step should not introduce any behavior changes.

Implement this step as separate code paths only for the new mode.

Implement this step in common code paths for the legacy / new mode. For the legacy mode, depending to the configured memory type, we can set one of the two pools to the managed memory size and always allocate from this pool, leaving the other pool empty.

Implement this issue in common code paths for the legacy / new mode. This should only affect the GC behavior.

This FLIP changes how users configure cluster resources, which in some cases may require re-configuring of cluster if migrated from prior versions.

Deprecated configuration keys are as follows:

Regarding JVM direct memory, we have the following alternative.

We decided to go with 3, but depends on how segment fault safe it turns out to be, we may easily switch to other alternatives after the implementation.