When discussing how to support Hive built-in functions in the thread of “FLIP-57 Rework FunctionCatalog” (http://apache-flink-mailing-list-archive.1008284.n3.nabble.com/DISCUSS-FLIP-57-Rework-FunctionCatalog-td32291.html), a module approach was raised.

As we discussed and looked deeper, we think it’s a good opportunity to broaden the design and the corresponding problem it aims to solve. The motivation now is to expand Flink’s core table system and enable users to do customizations by writing pluggable modules.

There are two aspects of the motivation:

Modules define a set of metadata, including functions, user defined types, operators, rules, etc. Prebuilt modules will be added and provided, or users may choose write their own. Flink will take metadata from modules as extensions of its core built-in system that users can take advantages of. For example, users can define their own geo functions and geo data types and plug them into Flink table as built-in objects. Another example is users can use an out-of-shelf Hive module to use Hive built-in functions as part of Flink built-in functions.

In Presto, users can write their own plugins by implementing the Plugin interface. In order for Presto to pick up the desired plugins at runtime, users have to drop all the plugin jars into a designated directory in Presto installation.

Presto support plugins via SPI. Class name of each plugin is provided to Presto via the standard Java ServiceLoader interface: the classpath contains a resource file named org.presto.spi.Plugin in the META-INF/services directory for discovery.

In this FLIP we’ll design and develop a generic mechanism for pluggable modules in Flink table core, with a focus on built-in functions.

Flink’s existing core metadata will also be a module named as “CoreModule”. Since we want to focus on supporting functions thru modules,we’ll only migrate Flink’s existing built-in functions into the CoreModule at this moment as the first step.

All module metadata will be seen as a part of Flink table core, and won’t have namespaces.

Objects in modules are loaded on demand instead of eagerly, so there won't be inconsistency.

How to Load Modules

To load modules, users have to make sure relevant classes are already in classpath.

Based on the module type defined in yaml file, SQL CLI will invoke factory service to search the factory class that provides the given module name, and then set them in TableEnvironment.

In case users forgot to specify core module, “modules” section will be commented out in yaml file as following

This FLIP will not take into consideration how to enable users use “f” in yyy module. We may allow users to do so by using whitelist/blacklist in the future, but they are not in the scope of this FLIP.

The following is a generic design with functions as a specific example. 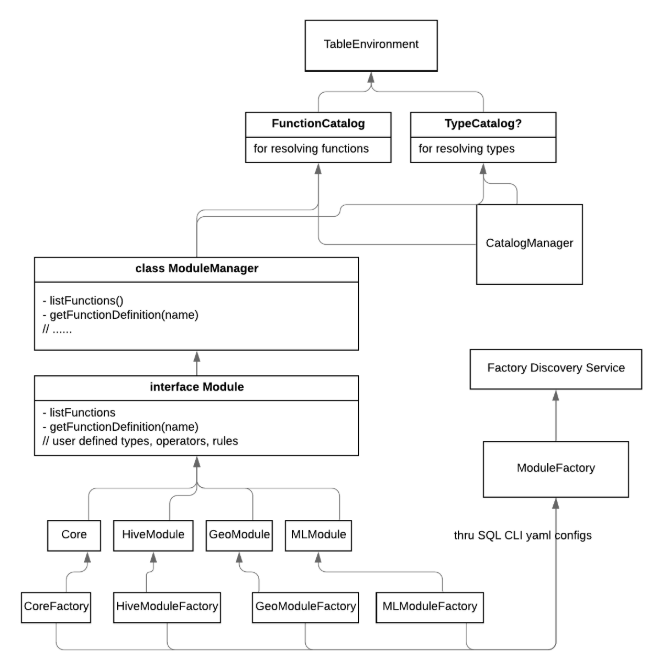 Module interface defines a set of metadata that a module can provide to Flink. It provides default implementations for all the APIs thus an implementation can implement only what it’s able to supply.

ModuleFactory defines a factory that is used for descriptors to uniquely identify a module in service discovery, and create an instance of the module.

CoreModule is a pre-defined singleton module that should contain all built-in metadata of Flink core.

We currently only move built-in functions into CoreModule.

ModuleManager is responsible for loading all the modules, managing their life cycles, and resolve module objects.

There was some proposals of merging FunctionCatalog with CatalogManager. It will not be considered in this FLIP.

To support numerous Hive versions, we will use the shim approach, which is similar to that of existing HiveCatalog. Letting users explicitly specifying Hive versions is necessary since there are differences in Flink-Hive data conversions among different Hive versions.

As mention above, though this FLIP provides a generic design and mechanism for all module object types we want to support, we will only implement functions. Other objects can be added incrementally later on.