This FLIP proposes a way to perform checkpoints with a non-blocking alignment of checkpoint barriers. It provides the following benefits.

We first evaluated with POCs two options when to persist:

In the following experiments, we had a simple topology (source → map → map → sleepy map → measure map), where each channel was a random shuffle. The sleepy map slept on average 0, 0.01, and 0.1 ms per record to induce backpressure. We compared a POC for adhoc spilling, a POC for continuous spilling, and the base commit in the master (1.11-SNAPSHOT). For each approach and sleep time, we measured 3 times and took the median while persisting on HDFS in an EMR cluster with 1 master and 5 slaves, each having 32 cores and 256 GB RAM, with a total parallelism of 160. 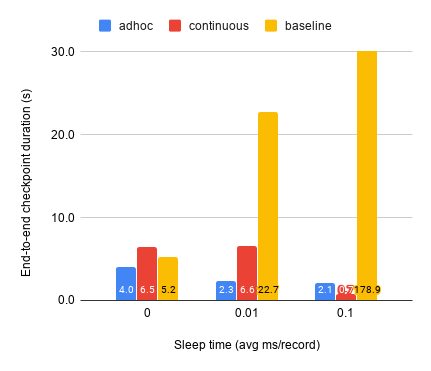 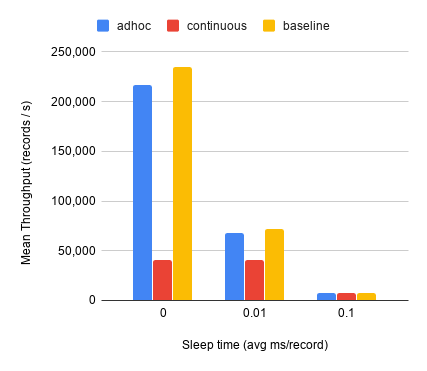 Nevertheless, continuous spilling seems to have rather big impact of overall throughput. While adhoc POC showed 10% performance decrease, continuous POC is clearly bottlenecked for higher volume. Primarily for that reason, we decided to go with the adhoc approach in this FLIP. While sub-seconds checkpointing times of continuous spilling surely would be a nice asset, the primary goal of decoupling checkpointing times from backpressure is also reached with adhoc spilling.

In this FLIP, we

For operators with one input channel, the checkpoint barrier directly overtakes all input data, triggers the synchronous parts of the checkpointing algorithm in the operator and is forwarded to the end of the output buffer.

If an operator has multiple input channels, there are two options:

Here, the tradeoff is between storage size for in-flight data and checkpoint latency and time where an input channel is blocked. The current state can even be incorporated by waiting for checkpoint barrier to arrive at the operator and inserts the checkpoint barrier before the output.

We want to implement all 3 versions to allow a fine-grain evaluation. Depending on the outcome, we will choose a specific default option and exhibit a (hidden) configuration “checkpointing policy”:

Note, that during downscaling the size limit of “max inflight data” might be temporarily exceeded during recovery (see recovery section).

For persistence, existing state management primitives will be reused to colocate operator state and inflight data, which offers the following advantages.

However, some drawbacks may require to use alternatives ways in the future.

The checkpoint format is only implicitly extended by adding more (keyed) state with conventional naming.

In general, inflight data is stored in state handles per operator sub task that are ultimately managed by CheckpointCoordinator. We need to add or modify the following components.

From a high level perspective, inflight data is restored where it was previously spilled:

This approach facilitates an easy integration into existing checkpointing mechanism. Restored buffers take precedence over all newly produced/received buffers. The following steps explain the assignment of state and mapping it to in-memory data structures (without rescaling) in more detail:

Since we hook into existing checkpointing mechanism, most of the rescaling challenges are solved in the same way.

To place a state into a task CheckpointCoordinator uses modulo operation. For example, when scaling out:

Subtask uses the same logic to determine the right InputChannel/SubPartition.

To match multi-buffer records, both upstream and downstream must sort records in the same order

For each key group, we need to place channel and operator state on the same subtask. For output buffers, we know (at least conceptually) the keys, so we can store state as KeyedStateHandle and then reuse operator state redistribution code.For input buffers, we only know a set of groups - the groups assigned to this task.

But, given that placement of key groups among the tasks is deterministic, we can: 1) compute old and new placements and 2) give each new task input buffers that could contain it’s key groups. The task then must filter out irrelevant records by keys (after deserialization). For regular (single-buffer) records it’s trivial.

For multi-buffer record, if it doesn’t belong to this subtask, it will never receive remaining buffers and therefore can’t deserialize and filter it out. Possible solutions:

To guarantee progress even during recovery, we need to implement three features:

Thus, in an environment with frequent crashes (under backpressure), progress can be made as soon as the operators themselves are recovered fast enough.

For compatibility, in documentation, clearly state that users of the checkpoint API can only use unaligned checkpoints if they do not require a consistent state across all operators.

There are two primary goals. First, we want to provide a minimal viable product (MVP) that breaks up the vicious cycle of overload and instabilities of a cluster with slow checkpoints and more accumulated load resulting from recoveries from outdated checkpoints. Second, we aim for the full FLIP implementation that will among other things allow rescaling from unaligned checkpoints to directly counter overload.

In particular, the following improvements will be achieved through full release over MVP:

We aim to make unaligned checkpoints the default behavior after the full implementation.