The FLIP-58 which aimed for supporting Python UDF is already accepted. As a critical part of python UDF, the environment and dependency management of users' python code is not supported yet. That means users can not introduce third-party libraries in their UDFs currently, which is not acceptable in most scenarios. It will be a great benefit to support environment and dependency management.

The implementation plan of FLIP 58 includes environment and dependency management but lacks a detailed description. This design document describes it in detail.

This interface is used to upload the python libraries that can be imported directly, e.g. single .py files, egg packages and some zip packages. The parent directories of .py files and the packaging files will be append to the PYTHONPATH of python workers so that they can be imported in UDF.

This interface is used to upload the python libraries which need to be installed before importing.

To use this interface you should first prepare a "requirements.txt" file which is often generated by executing "pip freeze > requirements.txt" in users' python environment. If you write it yourself please make sure that it contains all transitive dependencies.

Then you can prepare a directory and download all the packages listed in the requirements.txt to the directory. This step is optional. A recommended approach is executing the following command:

After that, call this interface with the path of requirements.txt and the cached dir if exists. Before running python worker, the packages listed in requirements.txt will be installed to the environment of python worker one by one according to their order in requirements.txt. If users specified the cached dir, it will be uploaded to cluster and the installation program will search packages in this directory instead of default repository(usually pypi.org), which can work in the environments without Internet.

This is a more complete example of this interface, suppose we need to install numpy on the cluster:

This interface is used to upload python environment and normal files to cluster. The parameter "archive_path" is the path of the zip file which contains the python environment or other files users want to upload and the parameter "extract_name" specifies the directory name to store extracted content of the zip file. The extracted directory will be moved to working directory of python worker, users could access their files using the relative path like "{extract_name}/xxxx".

This interface is user to set the path of python executable file on cluster to run python workers.

It is necessary to support managing dependencies and environment through command line so that the python jobs with additional dependencies can be submitted via "flink run" and web UI or other approached in the future. The PythonDriver class will support several new options as follows:

Besides the python files, additional information, such as file names of python files(Flink distributed cache will wipe the origin file names of uploaded files), environment variables and the target directory names of python archives, is also need to upload to cluster. These metadata will be serialized into json strings and stored in GlobalJobParameters object in ExecutionConfig, which can be propagated to every running tasks.

All logic of the environment and dependency management interfaces can be put in an independent class so that it can be easy to test. A simple architecture is as follows:

The PythonDriver will parse those new parameters and store them in a map. When the DependencyManager(see previous section) object creates, it will access the map and register the content of the map into itself. The sequence diagram is as follows: 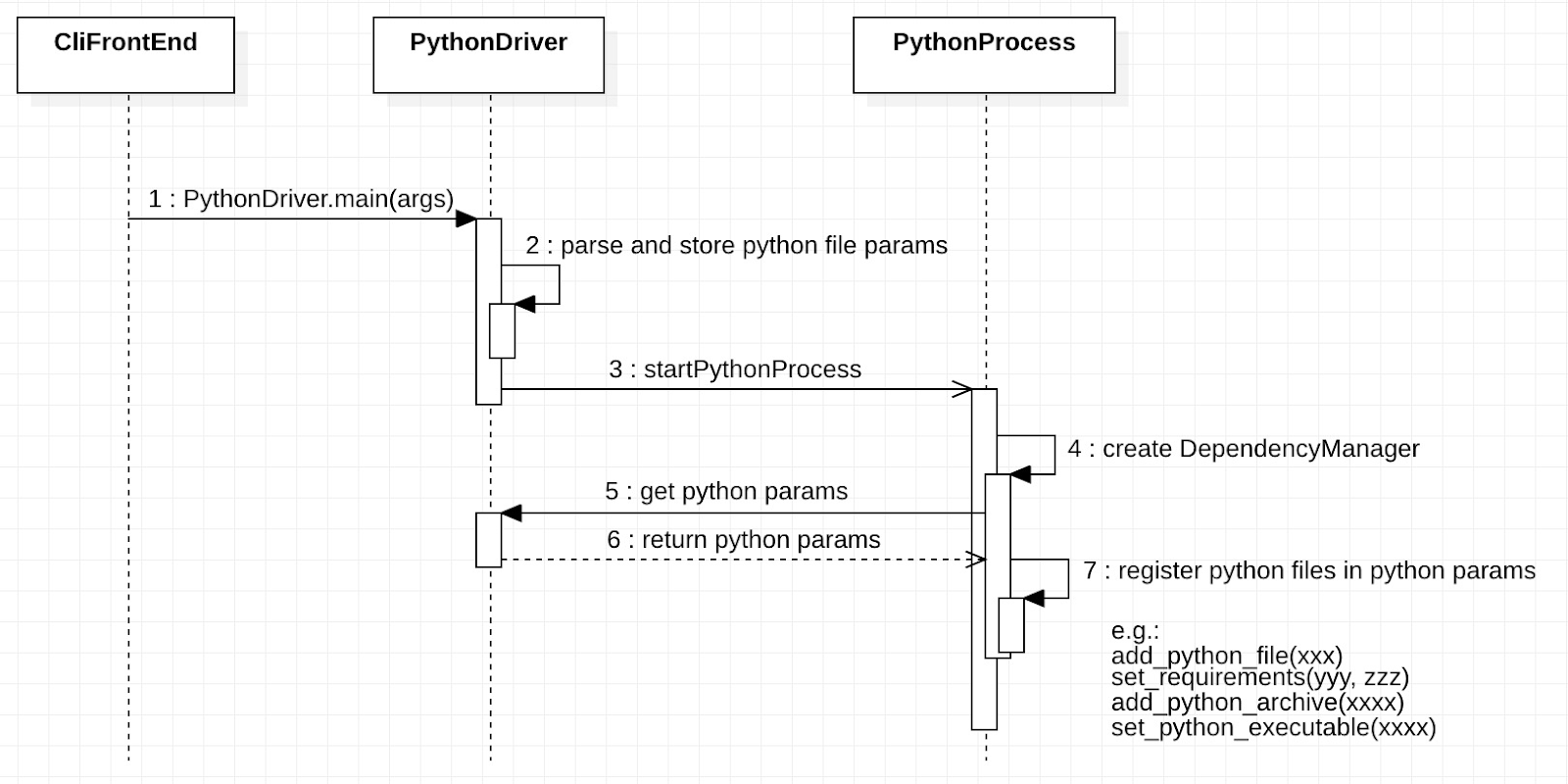 PythonDependencyManager is used to parse the Python dependencies uploaded from client, and provide that information to PythonEnvironmentManager.

The structure of PythonDependencyManager is as follows:

Flink Python UDF is implemented based on Apache Beam Portability Framework which uses a RetrievalToken file to record the information of users’ file. We will leverage the power of Apache Beam artifact staging for dependency management in docker mode.

The structure of ProcessEnvironmentManager is as follows:

Flink distributed cache will wipe the origin file name, including the file format suffix of the uploaded file. But different file formats have different logics to append files to PYTHONPATH:

So it is necessary to restore the original file names of uploaded python files. To avoid naming conflict we should store them in separate directories. Symbolic links can be used here to save copy time and disk space.

2. The directory stores pip install results of the packages listed in the uploaded requirements.txt

Apparently we should not install the users' packages into system python environment. A feasible approach is using "--prefix" param of pip to redirect the install location to a temporary directory, and then append the "bin" directory under the location to PATH variable and append the "site-packages" directory to PYTHONPATH variable.

3. The directory stores the extracted results of the uploaded archives

This directory is used as the working directory of python workers. The contents of uploaded python archives, including users' python environment, will be extracted to the specified sub-directory and can be accessed using relative path in python worker and its launcher script.

After the above directories are all ready, the shell script to launch python workers will be executed. The installation of required packages and the changing of working directory will be completed in this script. For each line of the requirements.txt file, the following command will be executed:

If users did not specify the cached dir the param "--no-index --find-links ${cached_dir}" will not be added.

The sequence diagram of runtime environment and dependency management is as follows: 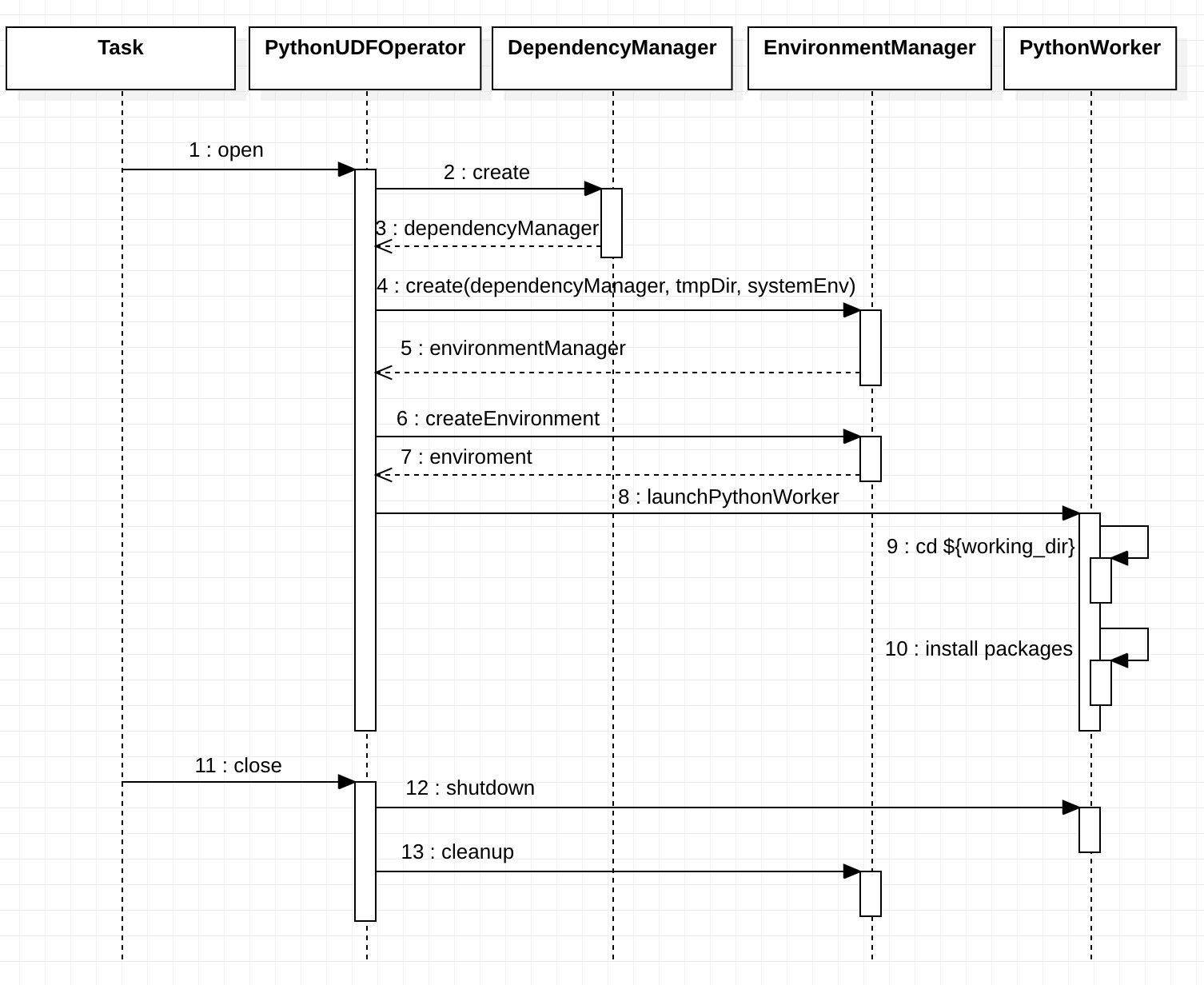 Apache Beam Portability Framework already supports artifact staging that works out of the box with the Docker environment. We can use the artifact staging service defined in Apache Beam to transfer the dependencies from the operator to Python SDK harness running in the docker container.

In general, to support running in docker mode, the following work will be done:

The structure of DockerEnvironmentManager is as follows:

2. UDF relies on users' other libraries