The core of geode is a few singletons

Geode has its own serialization framework, which is available to customers that implement the DataSerializable interface. You should look at the public documentation on DataSerializable and DataSerializer to become familiar with how to use this framework.

Geode uses log4j2 for logging. To get a logger add a static logger field to your class

Geode also has a framework for recording statistics. see How to create a Statistic for how to add new statistics.

To view statistics, use the vsd tool. See [Using VSD]

From a given member, you can refer to other members by using an InternalDistributedMember. When you send a message to a peer, you pass InternalDistributedMember objects to indicate that destinations. The DM provides methods to get all list of all of the currently running peers, and to add listeners to learn about peers coming and going. However, you may end up getting the list of members from a DistributionAdvisor instead. See the advisors section below.

To create a new message type, create a subclass DistributionMessage. The subclass should implement DataSerializableFixedID and take care of serializing any fields that need be to sent as part of the message. Implement the process method. On the remote side, the process method will be called, and you can execute any logic you want on the remote side.

To send a message, create an instance of your DistributionMessage subclass, call setRecipient or setRecipients to indicate the destination, and call DM.putOutgoing(yourMessage). The message will be sent to the recipients. 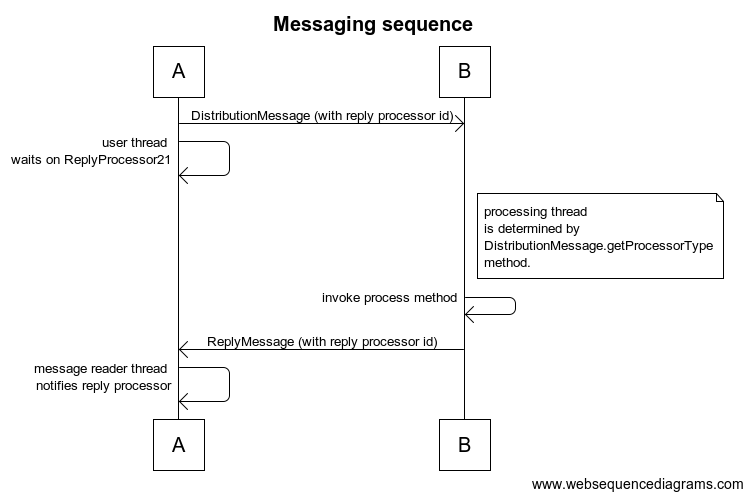 Being able to send a message is great, but you also need to be able send a request that gets a response, or wait until you are sure that peer has processed a message.

The reply processor pattern is used to handle messages that need replies. Here's a code sample (this is from RemovePersistentMemberMessage.

The first line creates an instance of ReplyProcessor21 and passes it the set of recipients. What this actually does is assign the reply processor a unique ID and register it with a singleton ProcessorKeeper. See ReplyProcessor21.keeper.

The unique id for the processor is added to the message with the call to processor.getProcessorId().

With the call to putOutgoing, the message is sent to the recipients.

Then the thread waits on the reply processor in processor.waitForRepliesUninterruptibly().

On the remote side, this is what the process method looks like

Here, the remote side sends a ReplyMessage with the same unique id.

Finally, when the ReplyMessage is received on the original sender of the message, it looks up the ReplyProcessor and notifies it. That wakes up the thread in processor.waitForRepliesUninterruptibly().

The distribution manager keeps track of all of the peers. However, for many cases, we actually want to form sub groups within the distributed system. For example, we might want to be sending messages just to the peers that have a particular region.

In the code, the user can get a list of peers from the DistributionAdvisor.

LocalRegion is the base class for other types of regions. A local region implements the public Region interface and holds the map with the region data. 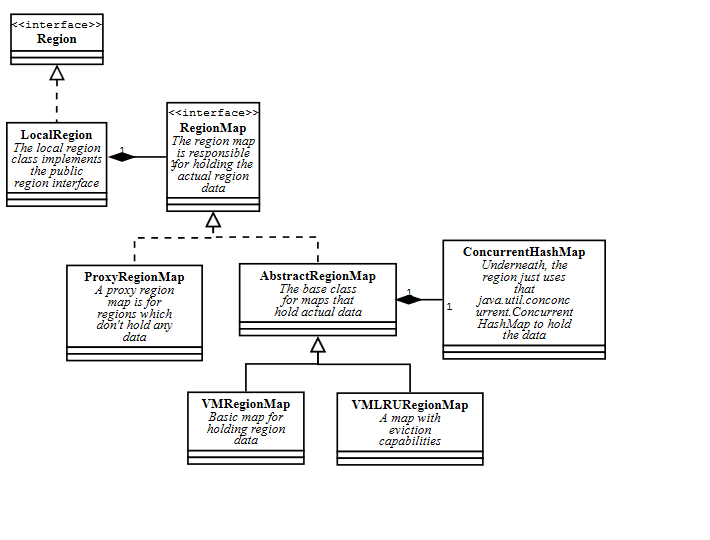 The DistributedRegion class is what we use for replicated regions. A distributed region extends a local region, but has an advisor for messaging. 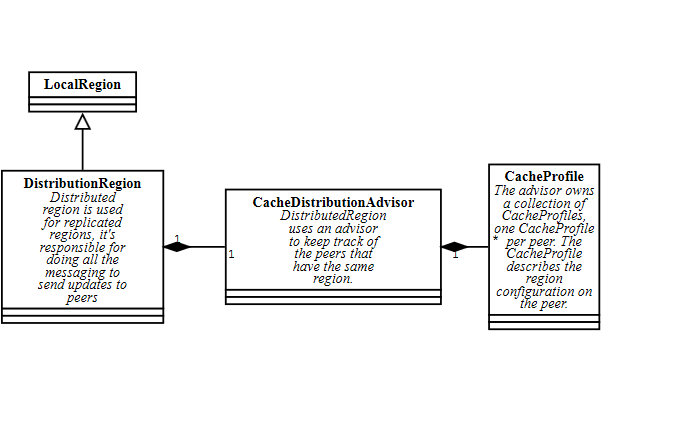 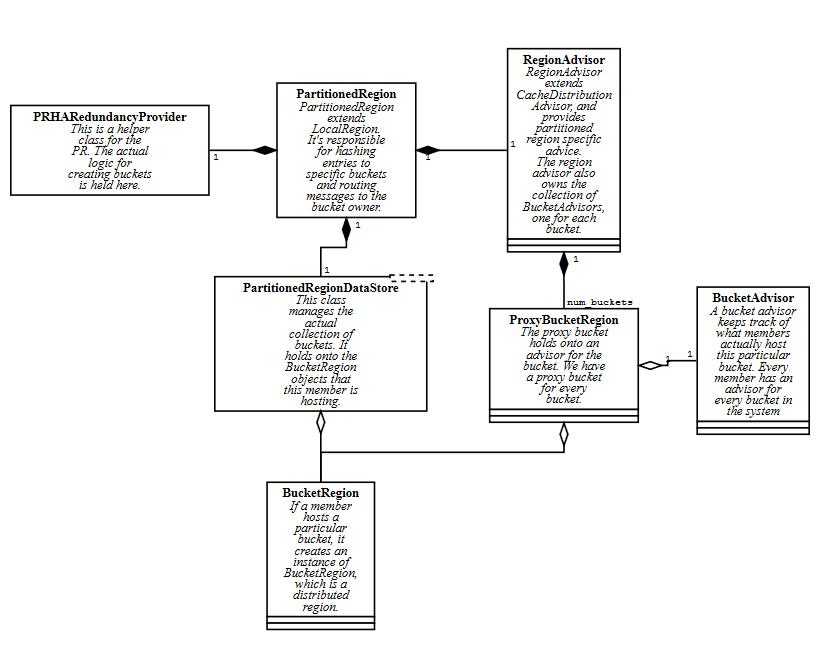 When a bucket is assigned to a member, that member creates an instance of BucketRegion, which extends DistributedRegion. The bucket region stores the actual data for the bucket. 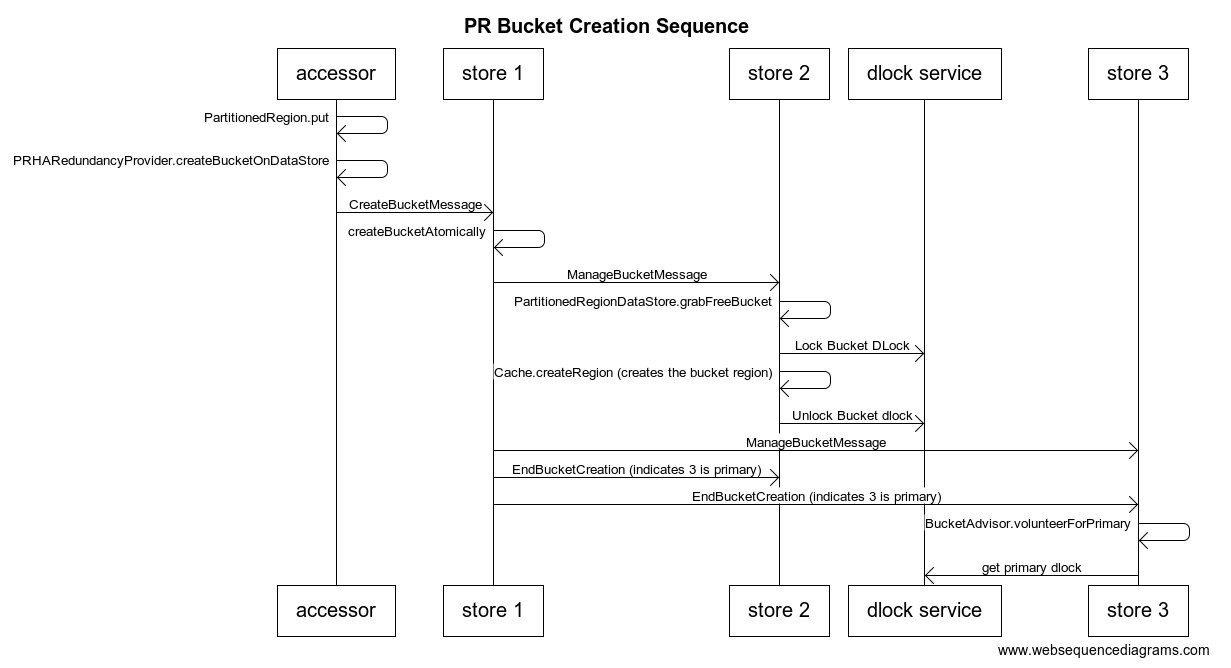 Bucket regions are slightly different than DistributedRegions in that they have a primary. One member is chosen as the the primary for each bucket. When the user does a put, the PartitionedRegion class routes the put to the primary.

There are some slides an and outline about partitioned regions here - [~dsmith:Internals talks]

The client side of the messages are in com.gemstone.gemfire.cache.client.internal as the subclasses of AbstractOp. These operations are responsible for sending the message and reading the reply.

The server code is implemented in BridgeServerImpl and AcceptorImpl. AcceptorImpl has the actual server socket and run loop which accepts connections on that socket. 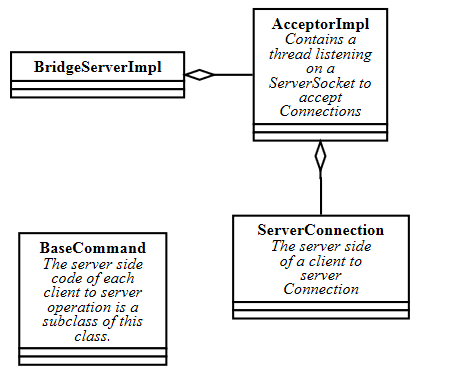 The thread reading from the connection is implemented in ServerConnection.

On the client side, the client to server connections are managed PoolImpl. Each client region holds a ServerRegionProxy on which the region can invoke operations. The proxy uses the pool to send the operation to the server side. 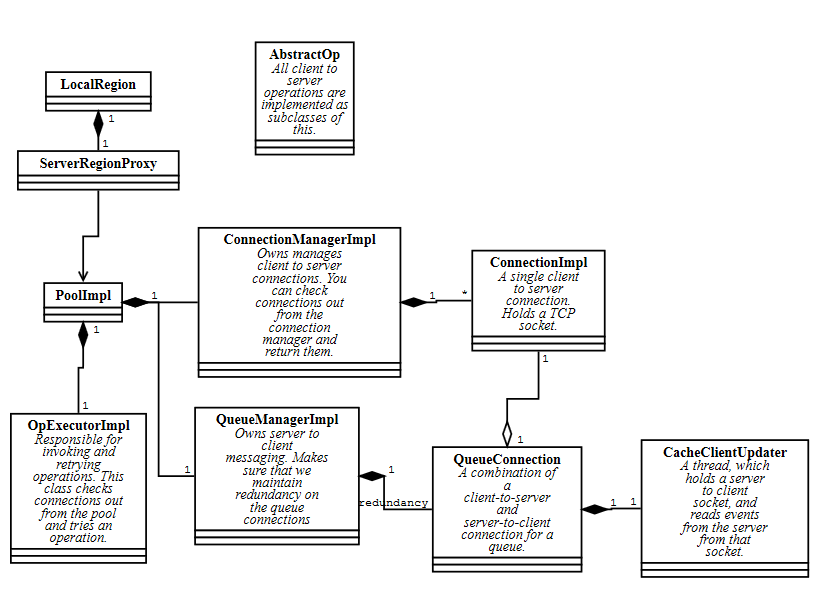 Clients can subscribe to events with Region.register interest or with continuous queries. They will receive updates when the events change on the server side through an asynchronous queue. 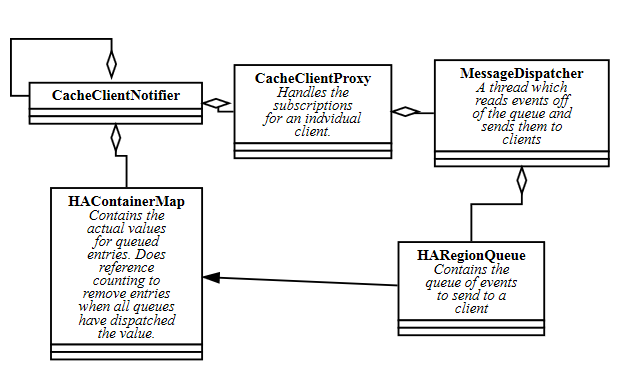 Each member writes to it's own independent disk store. Members never share the disk artifacts. For example, if a new member needs to create a copy of a region, we read the disk files from one member, send the logical keys and values to the other member, and that member writes it's own disk files.

The DiskStoreImpl class owns a particular disk store. On disk, the layout of the disk store looks something like this:

The .if file contains the metadata for the disk store (what regions are in the disk store, the membership information for each region, etc.). Internally, the init file is managed by the DiskInitFile class. Whenever a metadata change is made, the logical change is appended to the .if file. On recovery, the whole file is read and all of the changes are applied until we end up with the final metadata. When the .if file grows to large, we dump out the current metadata as a new file and delete the old .if file.

The _X.crf, _X.drf, and _X.krf files together make up an operation log, or oplog. So, in the above example, there are three oplogs, numbered 1, 2, and 3. Oplogs contain the region operations. The .crf file contains an creates or updates. The .drf file contains any deletes. And the optional .krf file contains a copy of the keys in the oplog, to speed recovery. Each oplog is managed by the Oplog class.

As the user performs operations, the operation is logged to the current oplog. When the current oplog reaches a given size limit, it closed and a new oplog is started. At that point, we may generate a .krf file for the old oplog.

During recovery, we read all of the oplogs to build up the contents of the region. If a krf file exists it we can read that rather than the .crf. That means we don't need to read the value during recovery.

To prevent the oplogs from growing forever, old oplogs are compacted. When over 50% of the data in an old oplog is garbage (because there are newer updates to the same keys in a newer oplog), the remaining data is copied forward to the current oplog and the old oplog is deleted from disk. 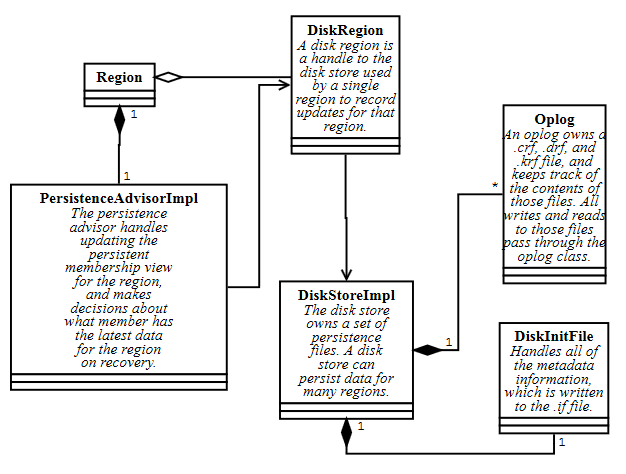 Query - Implementation of query can be found in DefaultQuery. This class is the starting point for query execution and is a good place to start tracing in a debugger. When executing a query, the first step the engine takes is parsing the query. We use antlr to do this task, which generates an AST Tree and we then compile the tree and execute

Querying on a Partitioned Region - Partition Region query execution is slightly more complex. There is logic for determining which nodes to send the query to, executing the query on the remote nodes and gathering the results on the coordinating node, among other things such as ordering results and retrying failed nodes. The logic for doing so can be found in PRQueryProcessor and PartitionedRegionQueryEvaluator.

IndexManager - An IndexManager is created for each region when an index is created on the region. There is an index manager per region. The index manager manages the creation, deletion and update of each index. It retains a map of index expressions to indexes, so that duplicate indexes can be avoided and is also used to determine if an index can be used for a query.

Index - Are used to provide a speed improvement for fields that are often queried on, but comes at a memory cost and very minor cost for maintaining the index. Internally there are various types of indexes. These include CompactRangeIndex, RangeIndex, HashIndex, MapRangeIndex, CompactMapRangeIndex, PartitionedIndex and PrimaryKeyIndex

For more details about this topic, please have a look at Querying and Indexes Internals.