The content of this page is growing stale and may or may not contain relevant, useful or correct information.

We have tests at the module level tests perform basic unit testing of the code in each module. We then have TCK tests that ensure Geronimo's compliance with the J2EE spec.  Now the integration tests introduces a level of testing that falls beyond the scope of the unit tests or the TCK tests. It performs system level tests of features and functionalities that Geronimo provides to the end users. Since Geronimo is an integration platform for the various open source technologies, this integration tests verifies and ensures such a succesful aggregation.

Checkout or update the trunk.
Build it top down (until we have all the 2.0-SNAPSHOT artifacts published)

You should now have a template testsuite named newFunc-testsuite under your geronimo/testsuite directory.
This maven project is wholly self-sufficient. It starts and stops the server. It does not have any tests to run yet. It even has surefire reports for the server start/stop executions.

Modifying the template to suit your function tests

NOTE Steps 1 & 2 above can be skipped. But there is a possibility that this artifactId will conflict with another artifactId created similarly from archetype. Hence it is recommended.

Maven will run through all the testsuites. For every testsuite, it will invoke all the testsets under it. By the time it is done, it should have created surefire xmls in every target/surefire-reports directory.

Using the -DinstallDirectory parameter will install Geronimo in one location and the same server instance will be used for each foo-testsuite. The server will be started/stopped for each of them too. The default is for every foo-testsuite to have it's own installation of the server in it's target directory. All testsets under it will use this same instance of the running server.

You may go to any single testsuite and execute 'mvn' from it to run only it's tests.

This will generate a website for the entire testsuite and deploy it to a site under geronimo.apache.org. See the summary of the results here.

The integration test is part of the regular geronimo tree and it resides under geronimo/testsuite. The child modules under this pom.xml are organized into various functional categories of the server. For eg., console-testsuite will perform tests on the console while the web-testsuites will perform tests against the web container. 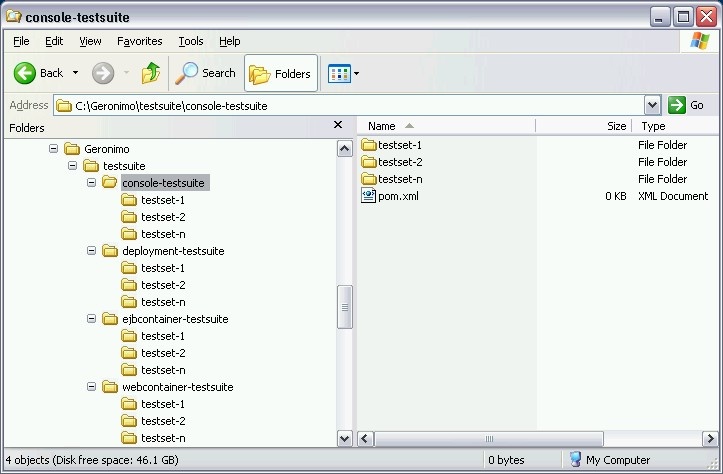 The goals to install/start/stop the server and deploy/undeploy modules are provided by the geronimo-maven-plugin. It has configuration option to either install a separate Geronimo server for each foo-testsuite or reuse one instance of the server installation. It also has configuration option to log the results for the purpose of generating surefire reports xml. The goals from this plugin are invoked by the pre-integration-test and post-integration-test phase of the Maven lifecycle appropriately.

A set of modules are provided for testing purposes. They are in the geronimo/testsupport directory. This pom.xml gets built during the beginning of the build cycle and provides various j2ee archives for use by the testsuite.

See deployment-testsuite for an example

The console-testsuite under geronimo/testsuite tests the console using Selenium (http://openqa.org).  This requires a special server process started which is provided by our selenium-maven-plugin.

See console-testsuite for an example

Maven does not generate surefire-reports for pom packagings. foo-testsuite is a pom packaging with executions in pre-integration-test and post-integration-test phases. The results of those tests will not be captured by Maven. Also, the surefire reports from the testset-n projects should be rolled up into it's parent foo-testsuite. This is done by generate-surefire-xml goal in the testsuite-maven-plugin. Another goal, generate-surefire-report will generate the surefire-report.html from those surefire xmls. Finaly fix-menu goal will fix the menu for this html file.