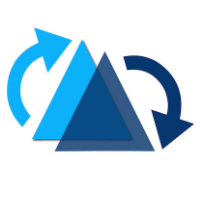 In the current implementation, HUDI Writer Client (in the write path) and HUDI queries (through Inputformat in the read path) have to perform a “list files” operation on the file system to get the current view of the file system.  In HDFS, listing all the files in the dataset is a NameNode intensive operation for large data sets. For example, one of our HUDI dataset has about thousands of date partitions with each partition having thousands of data files.

With this effort, we want to:

This should provide the following benefits:

In this document we provide two approaches on how to implement this functionality. We intend to finalize to a single approach after discussions and some workflow testing on sample dataset.

<Introduce any much background context which is relevant or necessary to understand the feature and design choices.> 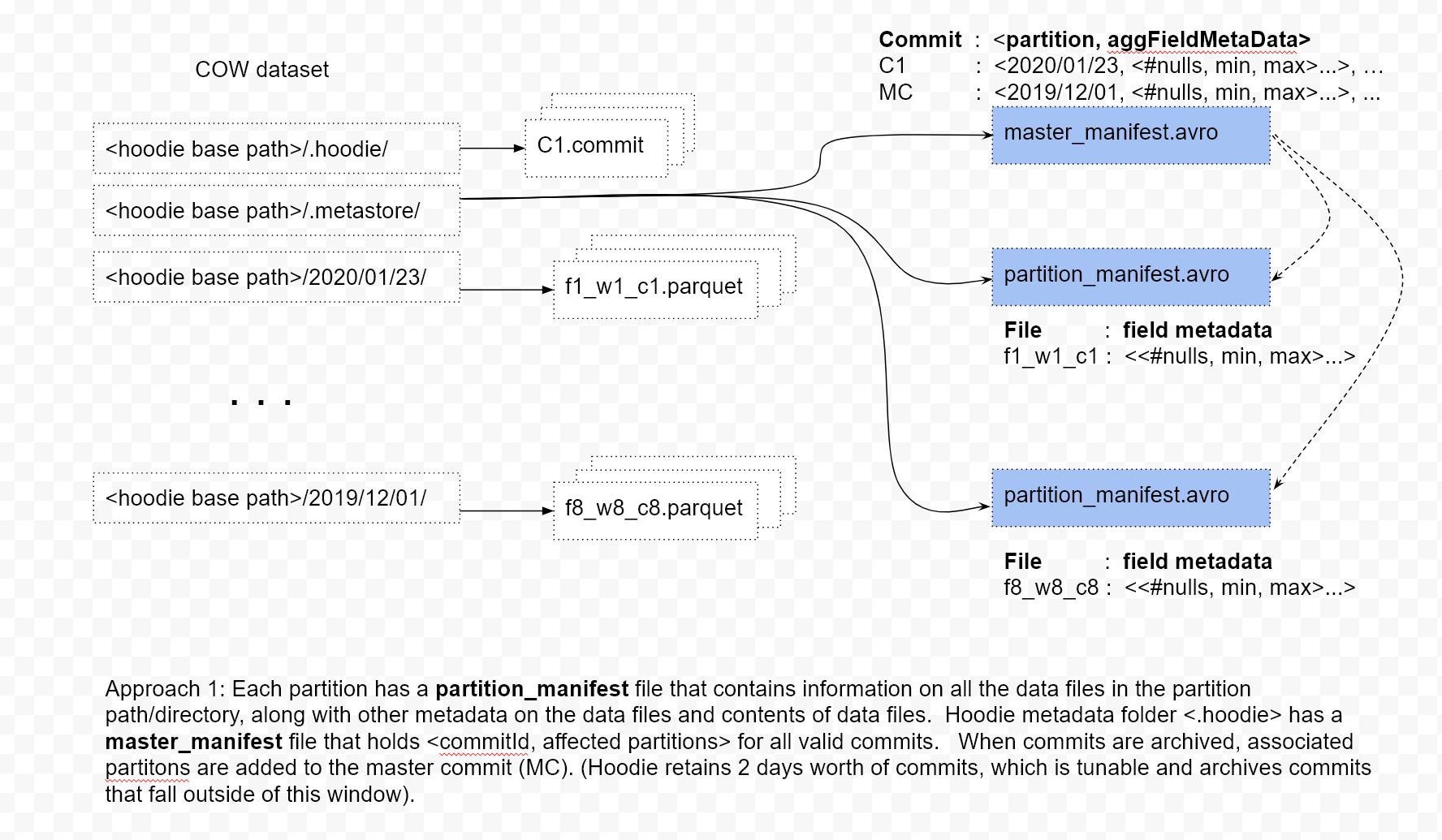 To support versioning operations (rollback, restore & savepoint etc), master manifest could maintain a map of {<commitId -> <partition metadata records for all partitions affected by the commit>} for every commit in the active timeline   For all partitions that have been created/updated by commits that have since been archived, “Master commit” list of “partition metadata” records.

For a sample dataset with 100 columns, 2000 date partitions, each partition with ~1000 data files and assuming hudi maintaining 48 commits in the active timeline (1 day’s worth of commits, with 30 minute cadence),  each commit is expected to touch roughly 50 partitions, average record size of the dataset is 5k bytes and “partition metadata” record contains <min/max> values for each column :

For the sample dataset with 100 columns, 2000 date partitions, each partition with ~1000 data files and assuming hudi maintaining 48 commits in the active timeline,  each commit is expected to touch roughly 50 partitions, average record size of the dataset is 5K bytes and “datafile metadata” record maintains <min/max> values for each column : 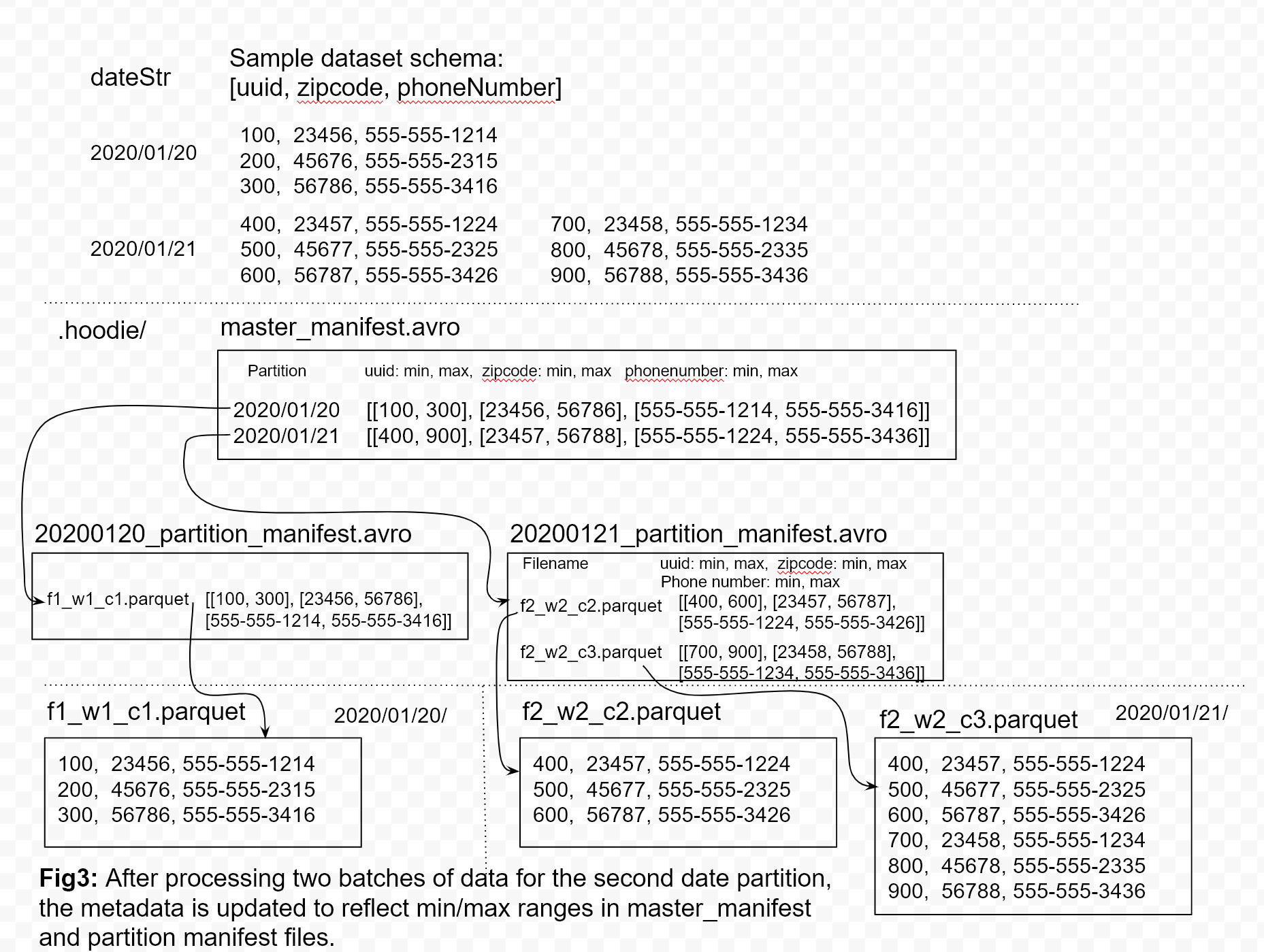 From a reader/query engines perspective, Inputformat’s “listStatus” requests will be served with the current view of the file system without the expensive distributed file system queries.

Maintaining additional metadata in the manifest file would help Hudi support faster queries and optimize the dataset to handle complex queries.  During the planning phase of the query from hive/presto, through supported Hudi input formats complex queries can be optimized with the use of metadata available in master manifest and partition manifest files.

When ingesting records into the dataset and updating the master/partition manifest metadata, “UPDATE_MANIFEST” action could use a similar mechanism of creating an “INFLIGHT” file to avoid multiple actors/executors trying to modify the file.

Also, we shall employ a strategy of appending metadata records to the manifest files throughout the day and consolidate the appended blocks periodically once every 24 hours.

The main idea in this approach is as follows:

A special Column Index File called “Partition Index” is also maintained. This index file maps the name of each partition to a list of fileIDs for the files in this partition. This can be used to lookup a list of all files within the partition. 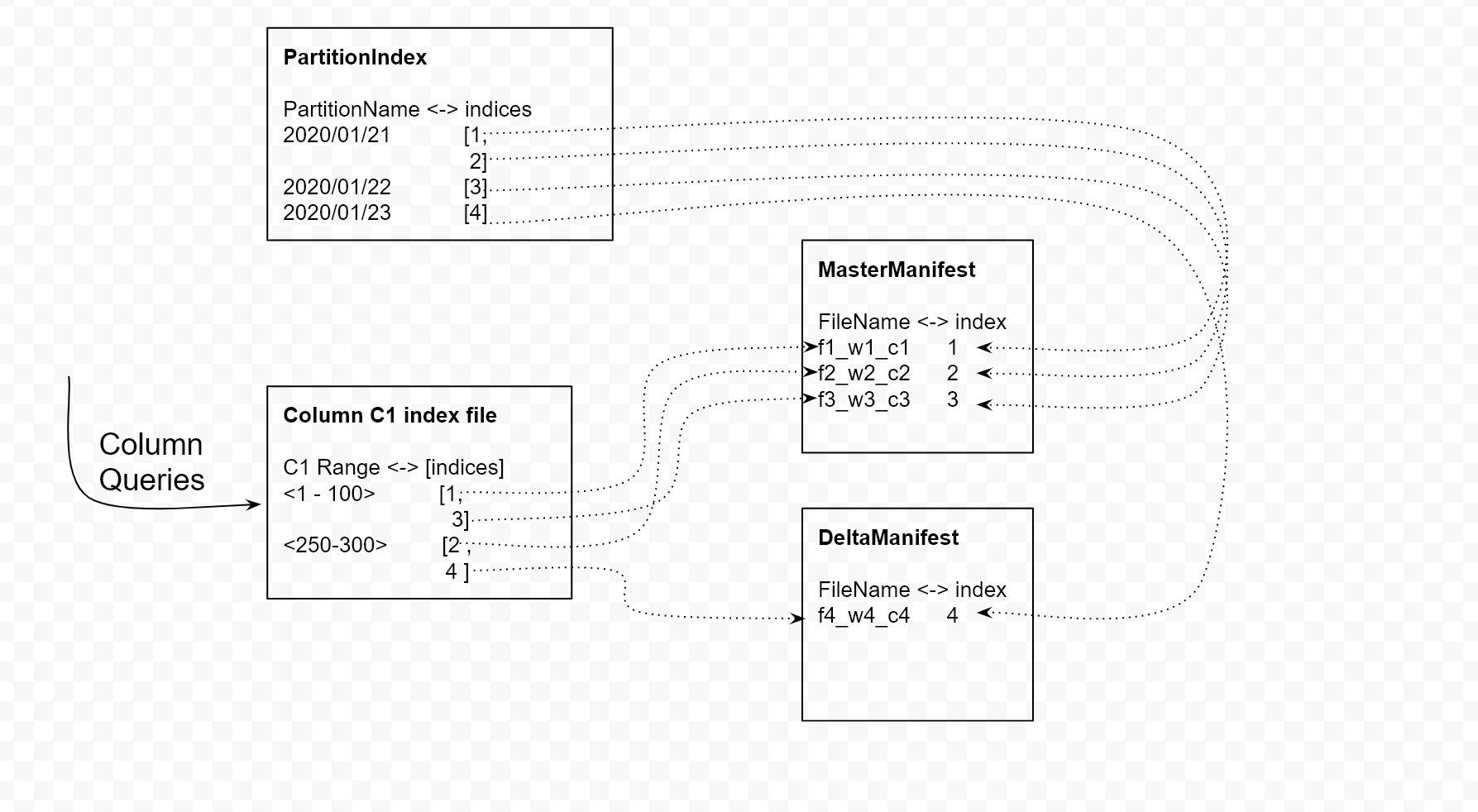 Based on the above dataset, these are some sample numbers for this approach:

The sizes of other Column Indexes should be similar but depend on the size of the primitive value contained in the Column.

As part of a commit, when new records are inserted to the dataset, new parquet files are created and a new Commit is recorded in the Hudi Timeline.

Before the Commit is finalized (Inflight - > Committed transaction), the following operations are performed:

Each time data is ingested, the Column Indexes are rendered stale i.e. they do not contain information on the files added since the Column Index was created. Writing a new Column Index each time is expensive. Hence, we can use one of these approaches:

Comparison between the Approaches

We have done a limited prototyping of the idea to gather some metrics as well as to further evaluate the feasibility of the feature. The prototype code also serves as a testbed to evaluate and compare ideas, file formats, use-cases.

The prototype introduces a new class MetadataStore which implements the functionality of consolidated metadata. Notable functions include:

Hence, we are mapping each file to an integer ID. In this format, any file's path can be found by a lookup by the file's unique ID.

Hence, we are mapping each partition to a list of integer ID encoded as an byte-array of 4-byte integer. In this format, given any partition, the list of the fileIDs can be determined by a lookup. To get the file paths, we need to lookup each fileID in the master-manifest as additional key-value lookup.

With this format, simple key value lookups can determine:

This simple format has benefits:

The prototype has been developed through HUDI-CLI for ease of testing on existing large production datasets. No data is changed within the datasets. All the metadata created is saved in a temporary folder on HDFS.

With this scheme, the metadata creation does not require any locking on the dataset and normal dataset pipelines (commit / clean / compaction) can continue. Changes done in parallel to the dataset will be processed incrementally by reading their instants from the timeline (part of delta manifest creation).

Each operation on the HUDI dataset creates some metadata (HoodieXXXMetadata) which is saved in the instants themselves. This data contains information which can be processed to find the file system changes that have occurred as part of the operation. Example:

Before each instant is completed (activeTimeline.saveAsComplete), it is passed over to Metastore.update() which applies the update to the delta manifest.

This reads the timeline, finds all the instants since the master manifest and calls Metastore.update() for each of them creating delta manifest.

Each delta manifest is cumulative - it contains all changes on top of the master manifest. This increases the delta manifest creation time (slightly) as the last delta manifest needs to be read before a new one can be written. But this improves lookup time as it bounds the worst case lookup attempts to two files.

The above stats do not show the HUGE benefit by removal of all file listings for data files. Ingestion / Compaction / querying perform at least one getAllPartitions() which for a large dataset leads to large number of calls to Namenode.