The technical approach described in the this document addresses the following high-level requirements:

Does HCatalog address these requirements?

HCatalog “is a table and storage management layer for Hadoop that enables users with different data processing tools - Pig, MapReduce, and Hive – to more easily read and write data on the grid ... HCatalog is built on top of the Hive metastore and incorporates Hive’s DDL.” “HCatalog provides read and write interfaces for Pig and MapReduce” built on top of Hive’s SerDes “and uses Hive’s command line interface for issuing data definition and metadata export commands.” This can also be summarized by saying that HCatalog is a set of wrapper APIs designed to make Hive’s MetaStore service and SerDe format handlers accessible to Pig and MapReduce. The MetaStore API wrappers and the SerDe wrappers are useful in making Hive metadata available to Pig and MapReduce programs.

Where does HCatalog in its current incarnation fall short?

HCatalog has a pluggable authorization system, with the only currently implemented plugin assuming a storage-based authorization model that uses the permissions of the underlying file system (HDFS) as the basis for determining the read and write permissions of each database, table, or partition. For example, in order to determine if a user has permission to read data from a table, HCatalog checks to see if the user has permission to read the corresponding subdirectory of Hive’s warehouse directory. With this authorization model, the read/write permissions that a user or group has for a particular database, table, or partition are determined by the filesystem permissions on the corresponding subdirectory in Hive’s warehouse.

The file system approach cannot support column-level access controls. This is a consequence of the fact that Hive’s data model makes it possible to store table data in flat files where each file may contain multiple columns. In order for HCatalog to support column-level ACLs it will need to defer to Hive for authorization decisions, i.e. it will need Hive authorization.

Integrity of Indexes and Statistics

Another problem with file system authorization is that it makes it difficult to ensure the consistency and integrity of Hive’s indexes and statistics. HCatalog’s file system authorization model allows users to directly access and manipulate the contents of the warehouse directory without going through Hive or HCatalog. Adding, removing, or altering a file in any of these directories means that any indexes or statistics that were previously computed based on the contents of that directory now need to be invalidated and regenerated. There is no mechanism for notifying Hive that changes have been made, and Hive is precluded from determining this on its own due to the bedrock design principle that it does not track individual files in the warehouse subdirectories.

Hive has a powerful data model that allows users to map logical tables and partitions onto physical directories located on HDFS file systems. As was mentioned earlier, one of the bedrock design principles of this data model is that Hive does not track the individual files that are located in these directories, and instead delegates this task to the HDFS NameNode. The primary motivation for this restriction is that it allows the Metastore to scale by reducing the FS metadata load. However, problems arise when we try to reconcile this data model with an authorization model that depends on the underlying file system permissions, and which consequently can't ignore the permissions applied to individual files located in those directories.

HCatalog's Storage Based Authorization model is explained in more detail in the HCatalog documentation, but the following set of quotes provides a good high-level overview:

There are several problems with this approach, the first of which is actually hinted at by the inconsistency highlighted in the preceding quote. To determine whether a particular user has read permission on table foo, HCatalog's HdfsAuthorizationProvider class checks to see if the user has read permission on the corresponding HDFS directory /hive/warehouse/foo that contains the table's data. However, in HDFS having read permission on a directory only implies that you have the ability to list the contents of the directory – it doesn't have any affect on your ability to read the files contained in the directory.

HCatalog includes a subproject Templeton which exposes two sets of REST APIs: a set to access Hive metadata and a set to launch and manage MapReduce jobs. A metadata REST API is something we want for AccessServer. HCatalog is not the right place for job management. Templeton has copied the Oozie code for job submission and management. We think users should use Oozie's REST APIs to submit jobs to Oozie. The HCatalog plan was to implement JDBC and ODBC on top of the Templeton job control REST API. That would be significant work (while we already have JDBC and ODBC for HiveServer2 that can be used for Pig as well) and would not allow for interactive JDBC or ODBC usage since Templeton executes each instruction as an Oozie job.

We will modify HiveServer2 in order to make it capable of supporting language runtimes other than HQL, in effect converting HiveServer2 into an application server for pluggable modules with the immediate goal of supporting Pig. The end result of these efforts will be called AccessServer.

Before discussing these modifications it is important to first understand the basic design of HiveServer2. 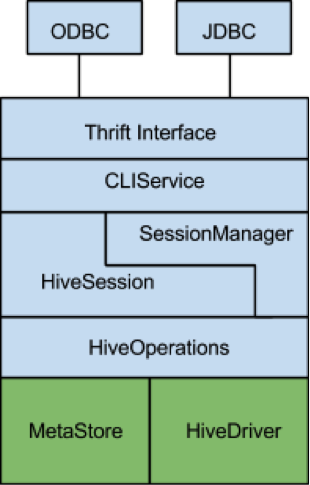 The core of HiveServer2 is the HiveSession class. This class provides a container for user session state and also manages the lifecycle of operations triggered by the user. In this context an operation is any command exposed through the CLIService API that can generate a result set. This includes the ExecuteStatement() operation and metadata operations such as GetTables() and GetSchemas(). Each of these operations is implemented by a specific Operation subclass. In order to execute Hive queries the ExecuteStatementOperation makes use of the pre-existing HiveDriver class. HiveDriver encapsulates Hive’s compiler and plan execution engine, and in most respects is very similar to Pig’s PigServer class.

The following diagram gives a quick overview of the changes required to support the Pig runtime engine in AccessServer. For simplicity we have removed Hive-specific components from the diagram such as the HiveOperation and HiveSession classes. 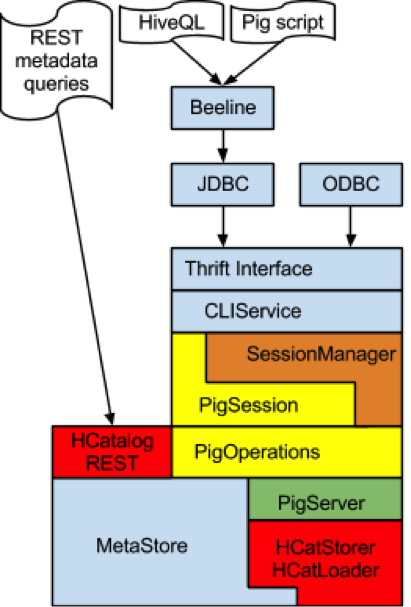 In the diagram blue denotes existing components in HiveServer2 that do not require modification. This includes the Thrift interface, JDBC/ODBC drivers, CLIService, and the Metastore.

Orange denotes existing HiveServer2 components that must be modified. We need to modify the SessionManager in order to support pluggable session factories. Note that the CLIService API already allows clients to request a specific Session type via a set of configuration parameters that are part of the OpenSession call.

Yellow denotes new components that must be fashioned from scratch: the PigSession class and the set of Pig Operation classes. The following implementation details relevant to these classes are worth noting:

Finally, red is used in the preceding diagram to highlight HCatalog components we plan to use: the HCatStorer and HCatLoader modules, and the REST API. These classes function as an adaptor layer that makes Hive’s metadata and SerDes accessible to Pig.