User submitted SQL query is converted by Hive to physical operator tree which is optimized and converted to Tez Jobs and is then executed on Hadoop cluster. Distributed SQL query processing in Hadoop differs from conventional relational query engine when it comes to handling of intermediate result sets. Hive query processing often requires sorting and reassembling of intermediate result set; this is called shuffling in Hadoop parlance.

Join reordering and join algorithm selection are few of the optimizations that can benefit from a cost based optimizer. Cost based optimizer would free up user from having to rearrange joins in the right order or from having to specify join algorithm by using query hints and configuration options. This can potentially free up users to model their reporting and ETL needs close to business process without having to worry about query optimizations.

Calcite is an open source cost based query optimizer and query execution framework. Calcite currently has more than fifty query optimization rules that can rewrite query tree, and an efficient plan pruner that can select cheapest query plan in an optimal manner. In this paper we discuss how Calcite can be used to introduce Cost Based Logical Optimizer (CBO) in to Apache Hive.

CBO will be introduced in to Hive in a Phased manner. In the first phase, Calcite would be used to reorder joins and to pick right join algorithm so as to reduce query latency. Table cardinality and Boundary statistics will be used for this cost based optimizations.

Hive is a data-warehousing infrastructure on top of Apache Hadoop. Hive takes advantage of Hadoop’s massive scale out and fault tolerance capabilities for data storage and processing on commodity hardware. Hive is designed to enable easy data summarization, ad-hoc querying and analysis of large volumes of data. Hive SQL is the declarative query language, which enables users familiar with SQL to do ad-hoc querying, summarization and data analysis easily.

In past Hadoop jobs tended to have high latencies and incurred substantial overheads in job submission and scheduling. As a result - latency for Hive queries was generally very high even when data sets involved were very small. As a result Hive was typically used for ETL and not much for interactive queries. With Hadoop2 and Tez the overheads for job submission and job scheduling have gone down significantly. In Hadoop version one, the jobs that could be executed could only be Map-Reduce Jobs.  With Hadoop2 and Tez that limitation no longer apply.

Hive on top of Hadoop version 1 often had to submit multiple map-reduce jobs to complete query processing. This Map-Reduce job pipeline degraded performance, as the intermediate result set now needs to be persisted to fault tolerant HDFS. Also submitting jobs and scheduling them were relatively costly operations. With Hadoop2 and Tez the cost of job submission and scheduling is minimized. Also Tez does not restrict the job to be only Map followed by Reduce; this implies all of the query execution can be done in a single job without having to cross job boundaries. This would result in a significant cost savings, as the intermediate result sets need not be persisted to HDFS or to even local disk.

Currently logical query optimizations in Hive can be broadly categorized as follows:

Physical optimizations in Hive can be broadly classified as follows:

Calcite is an open source, Apache Licensed, query planning and execution framework. Many pieces of Calcite are derived from Eigenbase Project. Calcite has optional JDBC server, query parser and validator, query optimizer and pluggable data source adapters. One of the available Calcite optimizer is a cost based optimizer based on volcano paper. Currently different pieces of Calcite is used in following projects/products: 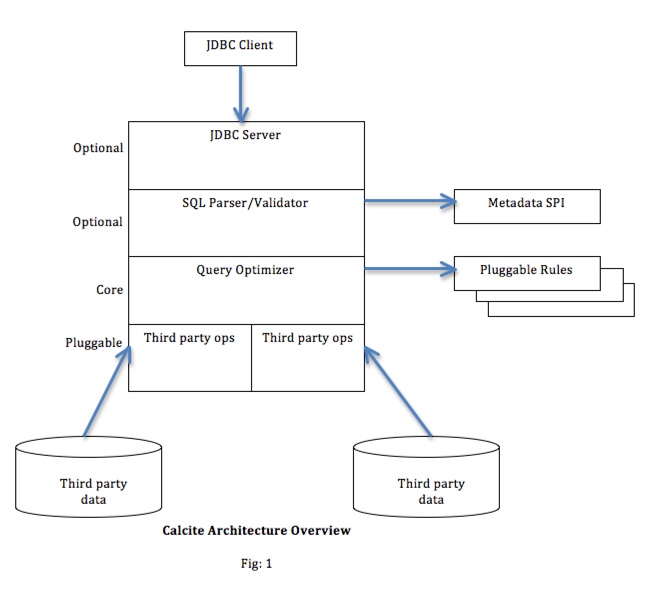 In this document we propose to use Calcite’s cost based optimizer, Volcano, to perform Cost Based Optimizations in Hive. We propose to implement Calcite based CBO in a phased manner. Note here that proposal is to use Calcite’s optimizer only and nothing else. Listed below are the envisioned stages of introducing CBO in to Hive using Calcite:

School of Information and Computer Science, University of California at Irvine

Yannis Ioannidis, Department of Informatics and Telecommunications, University of Athens

Hive only supports equi-Join currently. Hive Join algorithm can be any of the following:

If multiple joins share the same driving side join key then all of those joins can be done in a single task.

All of the join can be done in the same reducer, since R1 will already be sorted based on join key x.

Use Mappers to do the parallel sort of the tables on the join keys, which are then passed on to reducers. All of the tuples with same key is given to same reducer. A reducer may get tuples for more than one key. Key for tuple will also include table id, thus sorted output from two different tables with same key can be recognized. Reducers will merge the sorted stream to get join output.

Useful for star schema joins, this joining algorithm keeps all of the small tables (dimension tables) in memory in all of the mappers and big table (fact table) is streamed over it in the mapper. This avoids shuffling cost that is inherent in Common-Join. For each of the small table (dimension table) a hash table would be created using join key as the hash table key.

If the joining keys of map-join are bucketed then instead of keeping whole of small table (dimension table) in every mapper, only the matching buckets will be kept. This reduces the memory footprint of the map-join.

This is an optimization on Bucket Map Join; if data to be joined is already sorted on joining keys then hash table creation is avoided and instead a sort merge join algorithm is used.

If the distribution of data is skewed for some specific values, then join performance may suffer since some of the instances of join operators (reducers in map-reduce world) may get over loaded and others may get under utilized. On user hint, hive would rewrite a join query around skew value as union of joins.

CBO will be introduced in to Hive in three different phases. Following provides high-level overview of these phases:

Hive allows users to specify map/reduce/transform operator in the sql; data would be transformed using provided mapper/reducer scripts. There is no direct translation for these operators to relational algebra. We may represent them as table function in future.

Cluster By and Distribute By are used mainly with the Transform/Map-Reduce Scripts. But, it is sometimes useful in SELECT statements if there is a need to partition and sort the output of a query for subsequent queries. Cluster By is a short-cut for both Distribute By and Sort By. Hive uses the columns in Distribute By to distribute the rows among reducers. All rows with the same Distribute By columns will go to the same reducer. However, Distribute By does not guarantee clustering or sorting properties on the distributed keys.

Lateral view is used in conjunction with user-defined table generating functions such as explode(). UDTF generates one or more output rows for each input row. A lateral view first applies the UDTF to each row of base table and then joins resulting output rows to the input rows to form a virtual table having the supplied table alias.

The configuration parameter hive.cbo.enable determines whether cost-based optimization is enabled or not.

Data needed by an operator from its child operator in query tree requires assembling data from all instances of child operator. This data then needs to be sorted and chopped up so that a partition of the relation is presented to an instance of the operator.

Reading and writing data to HDFS is more costly compared to local FS. In Map-Reduce framework Table Scan would typically read data from HDFS and would write data to HDFS when switching between two Map-Reduce jobs. In Tez all of the operators should work with in a single Tez Job and hence we shouldn’t have to pay the cost of writing intermediate result set to HDFS.

Volcano optimizer in Calcite compares cost of two equivalent query plans by getting cost of each operator in the tree and summing them up to find cumulative cost. Plan with lowest cumulative cost is picked as the best plan to execute the query. “VolcanoCost” is the Java class representing cost for Calcite’s Volcano optimizer. “VolcanoCost” comparison operators seem to take into consideration only the number of rows to decide if one cost is less than other.

For Hive we want to consider CPU and IO usage first before comparing cardinality.

In the absence of histograms, cardinality can be assumed to follow uniform distribution on the distinct values. With this approach cardinality/distinct computation could always follow same code path (Histograms). Alternative is to use heuristics when histograms are not available (like the one described by Hector Garcia Molina, Jeffrey D. Ullman and Jennifer Widom in “Database Systems”). Currently Hive statistics doesn’t keep track of the distinct values for an attribute (only the number of distinct values is kept); however from min, max,number of distinct values, and table cardinality uniformly distributed histogram can be constructed. Following describes formulas for a uniform histogram construction.

In this paper for the cost formula, in the absence of histogram, we will follow heuristics described by Hector Garcia Molina, Jeffrey D. Ullman and Jennifer Widom in the book “Database Systems”.

Following are the cost variables that will be used in cost computation:

Following are the assumed values for cost variables:

T(R) = Consult Metadata to get cardinality;

Tsz = Consult Metadata to get average tuple size based on join schema;

Tsz1, Tsz2… Tszm are the average size of tuple in relations R1, R2…Rm.

R1, R2… Rm is the relations involved in join and R1 is the big table that will be streamed.

Tsz2… Tszm are the average size of tuple in relations R1, R2…Rm.

Size of tuple = Consult Metadata to get average tuple size based on join schema;

Tsz2… Tszm are the average size of tuple in relations R2…Rm.

Size of tuple = Consult Metadata to get average tuple size based on join schema;

Tsz2… Tszm are the average size of tuple in relations R2…Rm.

Query will be rewritten as union of two joins. We will have a rule to rewrite query tree for skew join. Rewritten query will use the cost model for the join and union operators.

CPU Usage = Cost of Sorting + Cost of categorizing into group

R1, R2 is the relations involved in join.

Tsz1, Tsz2 is the average size of tuple in relations R1, R2.

School of Information and Computer Science, University of California at Irvine