(Partition Map) Exchange - under the hood

PME - is a process of exchange partition information between nodes. A process goal is to set up an actual state of partitions for all cluster nodes. 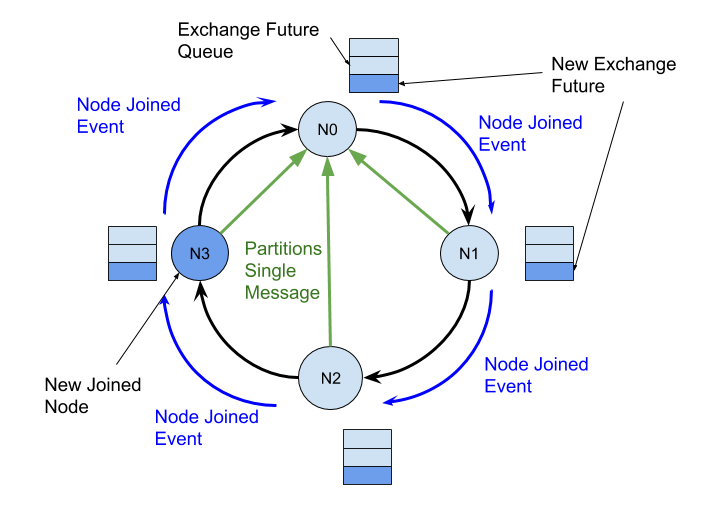 Initialization of exchange means adding future GridDhtPartitionsExchangeFuture to queue on each node.

Put to this queue (GridCachePartitionExchangeManager.ExchangeWorker#futQ) is done from the discovery thread.

First of all exhange worker thread runs init() on this exchange future.

There are important actions happened in this phase:

Basically there are 3 types of exchange - ALL, CLIENT and NONE.

We briefly describe CLIENT and NONE types here as they are much simpler and shorter than ALL type.

NONE exchange happened on server and client nodes when Node join / left event is triggered by the client node. NONE exchange just updates the topology version. Client node which joins to cluster has CLIENT exchange type.

All other things following are applicable for ALL exchange type.

If joining node has new configured caches (that did not exist before this exchange) such caches additionally started on all other nodes (org.apache.ignite.internal.processors.cache.GridCacheProcessor#startReceivedCaches)

On joining node all cluster and node caches start (org.apache.ignite.internal.processors.cache.distributed.dht.preloader.GridDhtPartitionsExchangeFuture#initCachesOnLocalJoin)

No additional actions with caches required on this phase.

Before the distributed exchange start, we need to wait for finishing all ongoing updates that were mapped on the previous topology version. After the topology future is set we have operations that had time to obtain previous topology version (we called them as “ongoing”), other operations asynchronously wait for exchange future finish so we do nothing with them. They will proceed after the exchange future is finished.

Finishing ongoing updates have happened on the Partitions Release phase.

Each update operation (atomic update, transaction) associated with some top-level future indicates the operation completion. We collect all of these futures to one CompoundFuture (or Multi-future) called “Partitions release future” and wait for its completion on all server nodes and then proceed to the next phase of exchange.

However, such simple waiting for completion maybe not enough.

For cases 1 and 2 a 2-phase waiting of transactions is introduced. In the first phase, we wait for finishing all transaction futures that we see locally on each of the server nodes. After waiting is finished all nodes waits for distributed countdown latch completion. After latch is released we have invariant that only transaction futures that represent commit from primary to backup can appear. So in the second phase, we do the same thing as in the first phase but without latch. [IGNITE-7871]

For case 3 a transaction timeout on PME is introduced. If the transaction can’t be completed within the specified timeout transaction will be forcibly rolled back during partitions release. [IGNITE-6827]

After partitions release phase is finished and we have no ongoing updates we can start with partitions manipulations. On this step, we need to restore partition states from page memory. Despite restoring partition states happen before node joins to cluster [IGNITE-9420] and it’s idempotent operation there is a case when this step is still needed. This is needed when Snapshot restore happens. During snapshot restore, we stop some caches and start, it again. After the cache start, we need to re-create partitions and read their state from disk (IgniteCacheDatabaseSharedManager#beforeExchange).

After existing partitions are attached to topology we need to create remaining partitions according to calculated affinity assignment on init phase and initialize partitions full map  (GridDhtPartitionTopology#beforeExchange).

If a node is not a coordinator, as a result, this method sends a single map ( GridDhtPartitionsSingleMessage ). A single map is sent using communication SPI (in peer2peer manner).

The coordinator maintains a list of nodes to wait for a response from (N1, N2, N3 for example at pic.1).

Exchanges merge is optimization when multiple topology events (node join / left) are happening at the same time. Instead of sequential execution of such exchanges they can be merged into one [IGNITE-6124]. How it works:

When all single messages of the current exchanges are received, the coordinator sequentially scans the exchange worker queue and finds all topology events that can be merged together. If the topology event requires a single message (node join) coordinator will wait for it. If next topology event in the queue is not supposed to be merged (e.g. it’s custom discovery event, or node joins with new caches) queue scan is stopped. All additional single messages from other joining nodes are placed here (GridDhtPartitionsExchangeFuture#mergedJoinExchMsgs), if other joining node hasn’t sent a single message yet, await counter is incremented (GridDhtPartitionsExchangeFuture#awaitMergedMsgs) when a single message is received this counter is decremented. If this counter becomes zero coordinator finishes exchange as in regular way but with another result topology version equal to the freshest version that it sees in merged exchange futures. Discovery events from such merged exchanges are placed to the current exchange future and they are used for further calculations. Merged exchanges are removed from the exchange queue on all nodes when the current exchange is finished.

On this step, we need to calculate ideal and “real” affinity partitions distribution on coordinator considering the state of partitions received from all other nodes. Ideal affinity partitions distribution is controlled by affinity function (Rendezvous by default). This function assigns primary and backup (configurable backup factor) nodes for each of partitions in all cache groups. Primary node always reflects the most actual state of data in each of the partitions. Primary node usually is a leader for any operations on partition and it replicates state to backup nodes.

Partition on a primary node should always have OWNING state. In the case of full and stable topology, ideal distribution is equal to real. In case of unstable topology, join-leave nodes, baseline change ideal affinity distribution not always following invariant that primary node has partition in OWNING state, because ideal affinity distribution doesn’t take into account the state of all partitions, it just shows desired state affinity.

In this case, we need to place some backups that have OWNING state onto primary place before rebalance is finished. After rebalance such temporary distribution is changed to ideal and all primary nodes are now on the place, while extra backups become rent. This process is called as LateAffinityAssignment.

There are 2 main strategies to calculate “real” affinity:

This strategy is used for almost all types of exchange - activation, baseline change and node left case.

On this step, we compare partition update counters and partition sizes between nodes that reported partition OWNING status. If there is a difference it may signal about data inconsistency problems in a cluster. The appropriate warning will be printed.

On this step, we need to find outdated OWNING partitions (having update counter less than others) move them into MOVING state and prepare to rebalance after exchange.

If partition can’t be rebalanced using WAL (@see WAL History reservation) asynchronous clearing will be started after changing such partition to MOVING state.

Usually OWNING partitions that have outdated update counter are come from joining nodes that were offline some time.

This step is evaluated during cluster activation, baseline change or node join.

This step is evaluated only when the node failed or left from cluster instead of previous (@see Assign partition states) step execution.

According to single maps received and to its own state coordinator build the full map.

When the state of partitions and affinity are determined we need to notify about this all other server nodes that participated in the exchange. Participated nodes set are formed

To send all necessary information messages called “GridDhtPartitionsFullMessage” are used. It contains the following important information:

When all expected responses were received coordinator sends full map to other nodes. 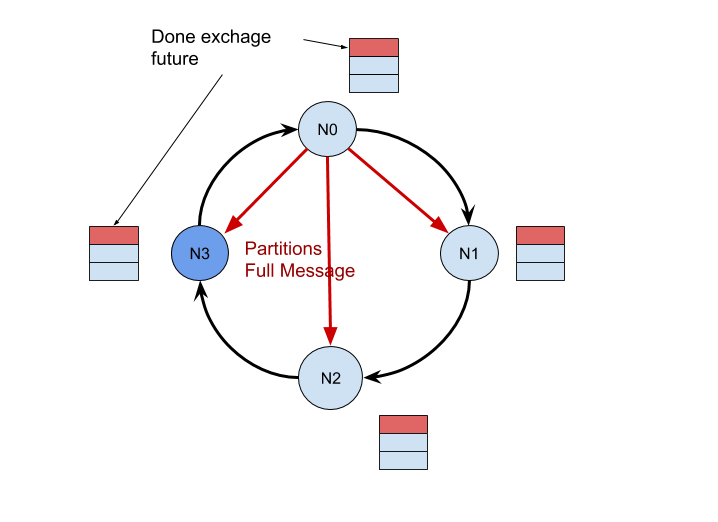 Following is example of logging of 'Sending full partition map' for 2 caches:

On receiving full map for current exchange, nodes calls onDone() for this future. Listeners for full map are called (order is not guaranteed).

Example of exchange and rebalancing for node join event

Let's suppose now new node is joining (it would be Node 4).

All other nodes know state of partitions that coordinator had observed some time ago.

For example, Partition 3 Backup is now assigned to new node 4 (to be moved to N4)

Node 2 does not throw data and does not change partition state even it is not owning partition by affinity on new topology version.

Step 3. Node 4 starts to issue demand requests for cache data to any node which have partition data.

The full-map exchange most likely will be completed before node 4 rebalances all the data it will own (with node 4 partition 3 state - Moving),

Step 4. When all data is loaded (last key is mapped) Node 4 locally changes state to Owning (other nodes think it is Moving).

Step 5. Node 4 after some delay (timer) sends single message to Coordinator. This message will have absent/'null' version of exchange.

Partition can be safely removed.

Partition state is changed to Renting locally (other nodes think it is Owning).

All nodes eventually get renting state for P3 backup for Node 4.

SingleMessage with exchId=null is sent when a node updates local partitions' state and schedules a background cluster notification.

In contrast, when a partition map exchange happens, it is completed with exchId != null.

If more topology updates occurred, this causes more cluster nodes will be responsible for same partition at particular moment.

Clearing of cache partition data immediately is not possible because of SQL indexes. These indexes covers all node's partitions globally. Elements removed one by one. Later state will be Evicted.

Let's suppose for a second, such partition map exchange is not synchronous: There is possible case that 2 primaries exists in Owning state. New node changed state locally, old node does not received update yet. In that case lock requests may be sent to different nodes, it could brake ACID.

As result, primary migration requires global synchronous exchange. It should not be running in the same time with transactions.

For protection there is Topology ReadWrite Lock

This is feature is enabled by default since 2.0+ and is the only possible option since 2.1+.

On each topology change, for each started cache partition-to-node mapping is calculated using {@link AffinityFunction} configured for cache. When late affinity assignment mode is disabled then new affinity mapping is applied immediately.

In late affinity assignment mode if primary node was changed for some partition then current primary is not changed and new primary is temporarily assigned as backup. Later, when it's ensured that all new "ideal affinity" primaries are ready to become true primaries, cluster performs late affinity switch procedure: on separate PME (triggered by CacheAffinityChangeMessage) primary assignments are recalculated to match with {@link AffinityFunction}. There are three cases which may require late affinity assignment:

Moment of the late affinity switch is controlled by the coordinator node. It stores information about all ongoing rebalancing processes in CacheAffinitySharedManager#waitInfo. When it's empty, coordinator node sends affinity change message (see {@link CacheAffinitySharedManager#checkRebalanceState}), which triggers late affinity switch PME. In case all partitions on joined node are up-to-date, such PME is triggered right away after topology change PME.