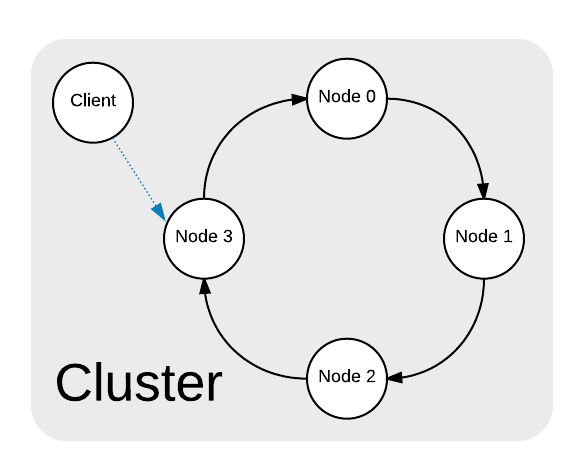 Figure 1.
A cluster in Ignite is a set of interconnected nodes where server nodes (Node 0, Node 1, etc. in Figure 1) are organized in a logical ring and client nodes (applications) are connected to them. Both server and client nodes can execute all the APIs supported in Ignite. The main difference between the two is that client nodes do not store data.

Data that are stored on the server nodes are represented as key-value pairs. The pairs in their turn are located in specific partitions which belong to individual Ignite caches as shown in Figure 2. 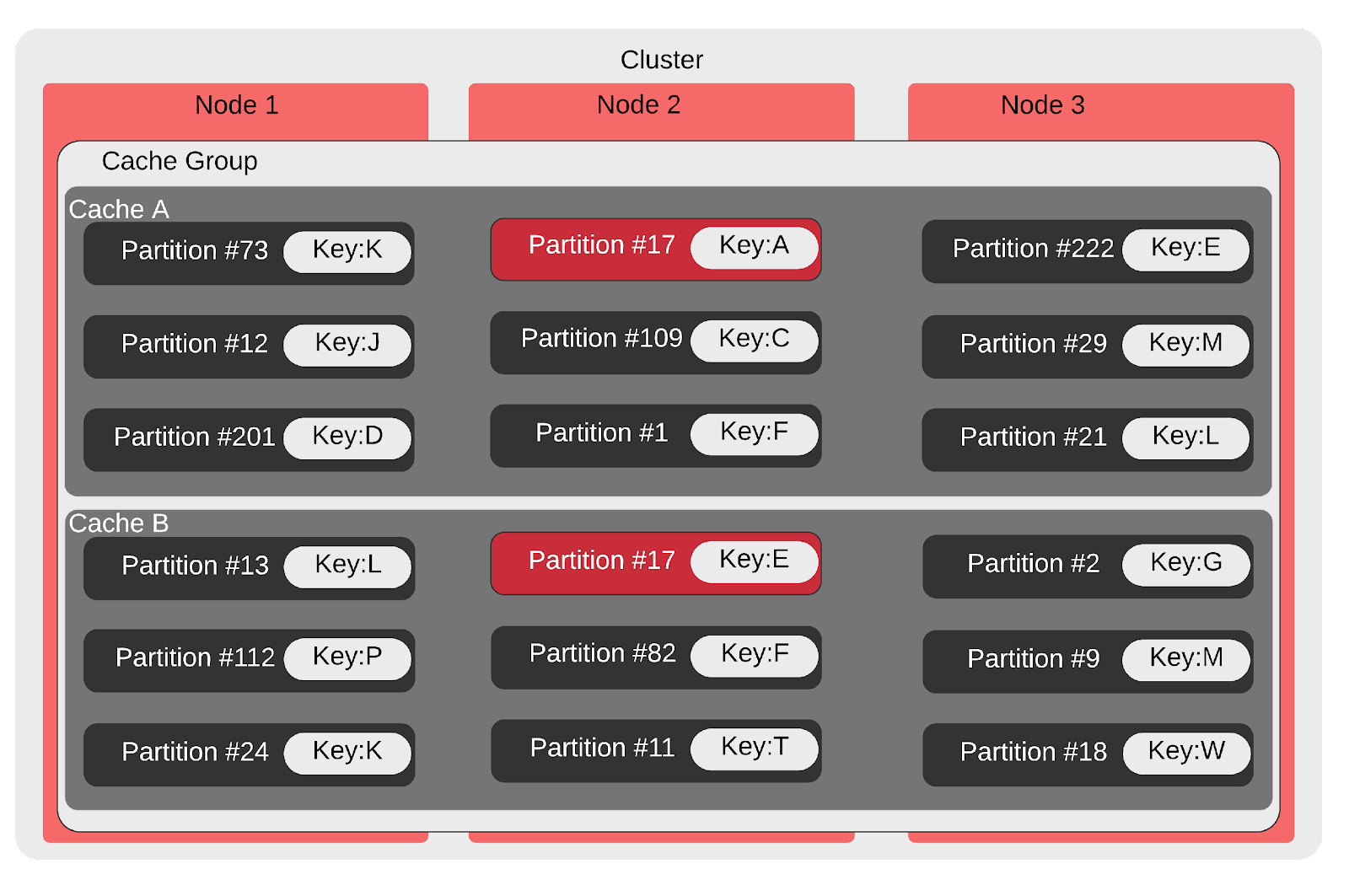 To ensure data consistency and comply with the high-availability principle, server nodes are capable of storing a primary as well as backup copies of data. Basically, there is always a primary copy of a partition with all its key-value pairs in the cluster and there may be 0 or more backup copies of the same partition depending upon the configuration parameters.

Every cluster node (server or client) is aware of all primary and backup copies of every partition. This information is collected and broadcast to all the nodes from a coordinator (the oldest server node) via internal partition map exchange messages.

However, all the data related requests/operations (get, put, SQL, etc.) go to primary partitions except for some read operations when CacheConfiguration.readFromBackup is enabled. If it's an update operation (put, INSERT, UPDATE) then Ignite ensures that both the primary and backup copies are updated and stay in a consistent state.

This section dives into the details of the Ignite transactional protocol. High-level principles and features are described in the Ignite technical documentation.

A single transaction in distributed systems usually spans across several server nodes which imposes additional requirements for data consistency. For instance, it is obligatorily to detect and handle situations when a transaction was not fully committed due to a partial outage or cluster nodes loss. Ignite relies on two-phase commit for handling this and many other situations in order to ensure data consistency cluster-wide.

As the protocol name suggests, a transaction is executed in two phases. The "prepare" phase goes first, as shown in Figure 3. 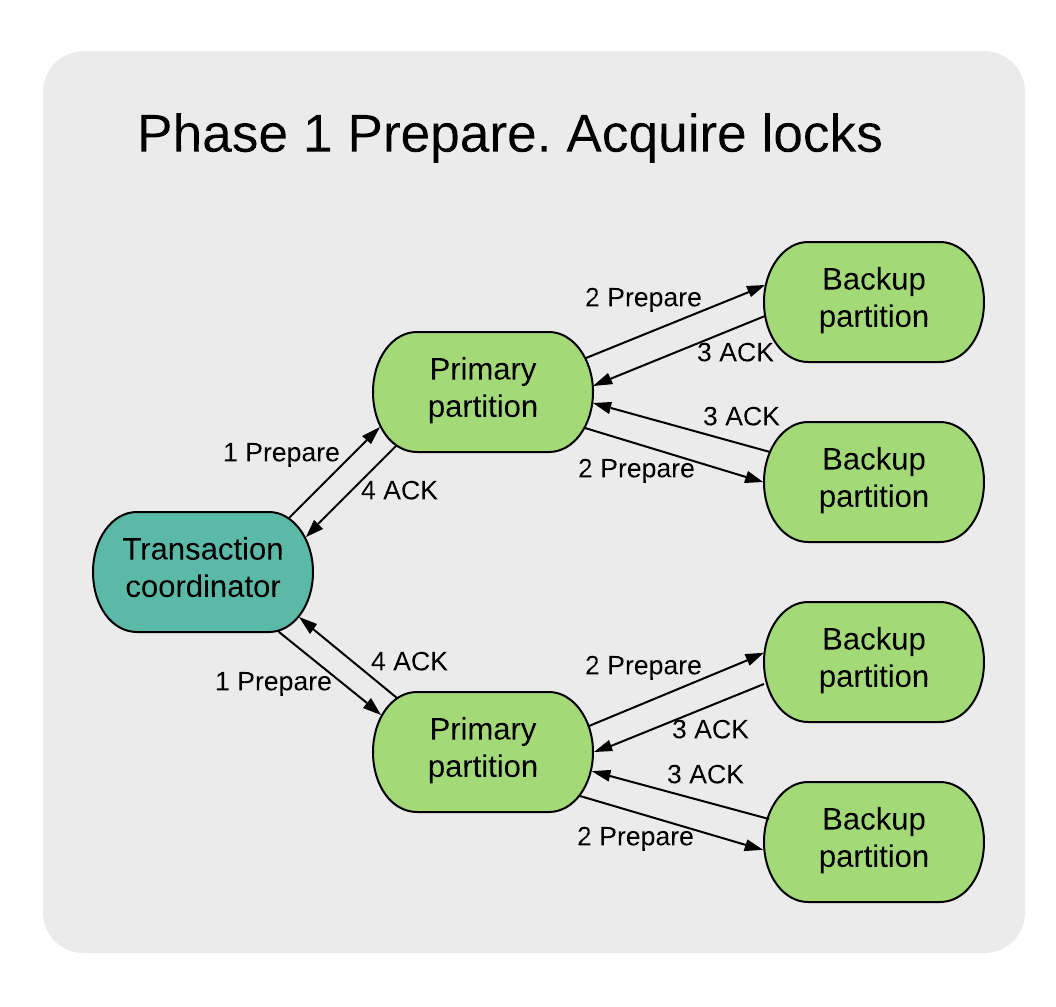 Next, the transaction coordinator executes the second phase by sending a "commit" message, as shown in Figure 4. 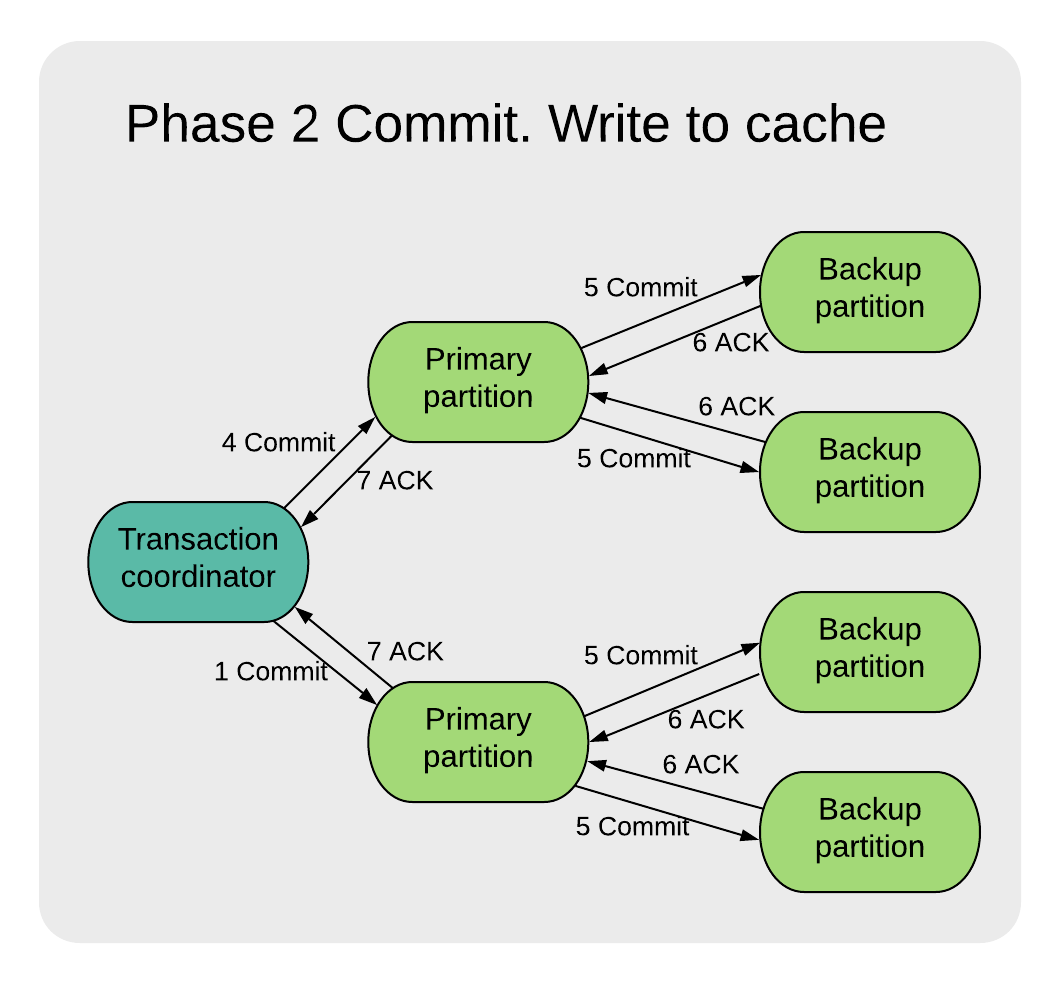 This is how the 2-phase commit works in a nutshell. Below we will see how the protocol tolerates failures, distinguishes pessimistic and optimistic transactions and does many other things.

Near Node and Remote Node 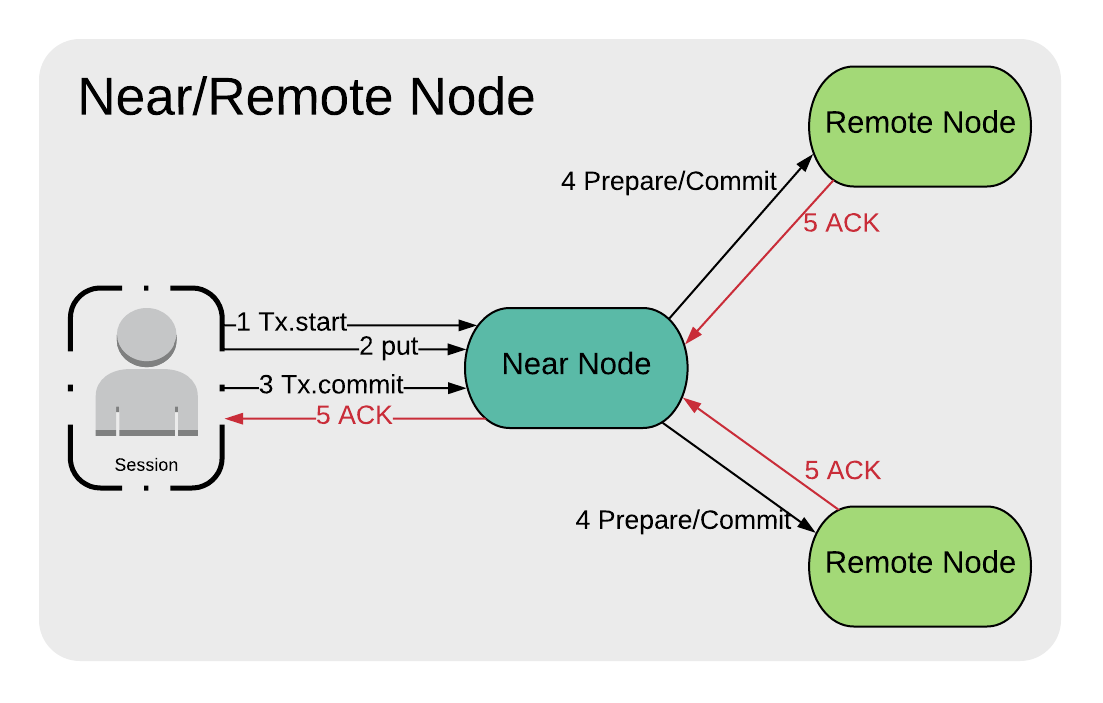 This section elaborates on locking modes and isolation levels supported in Ignite. A high-level overview is also available in the Ignite technical documentation.

In multi-user applications, different users can modify the same data simultaneously. To deal with reads and updates of the same data sets happening in parallel, transaction subsystems of products such as Ignite implement optimistic and pessimistic locking. In the pessimistic mode, an application will acquire locks for all the data it plans to change and will apply the changes after all the locks are owned exclusively while in the optimistic mode lock acquisition is postponed to a later phase when a transaction is being committed.

In pessimistic and read committed mode, locks are acquired before the changes brought by write operations such (as put or putAll) are applied, as shown in Figure 6. 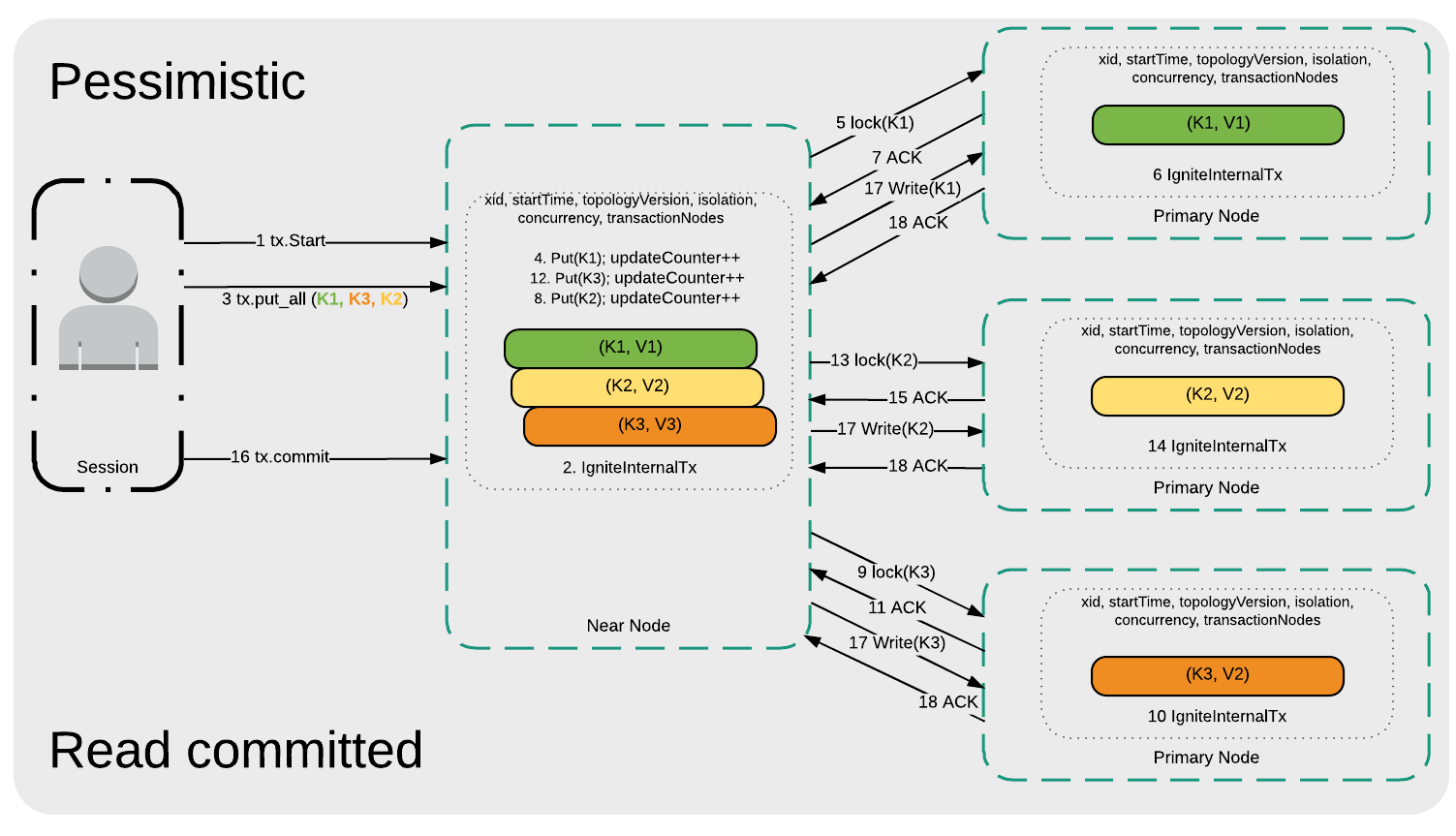 Figure 6.
However, Ignite never obtains locks for read operations (such as get or getAll) in this mode which might be inappropriate for some of the use cases. To ensure the locks are acquired prior to every read or write operation, use either repeatable read or serializable isolation level in Ignite, as shown in Figure 7. 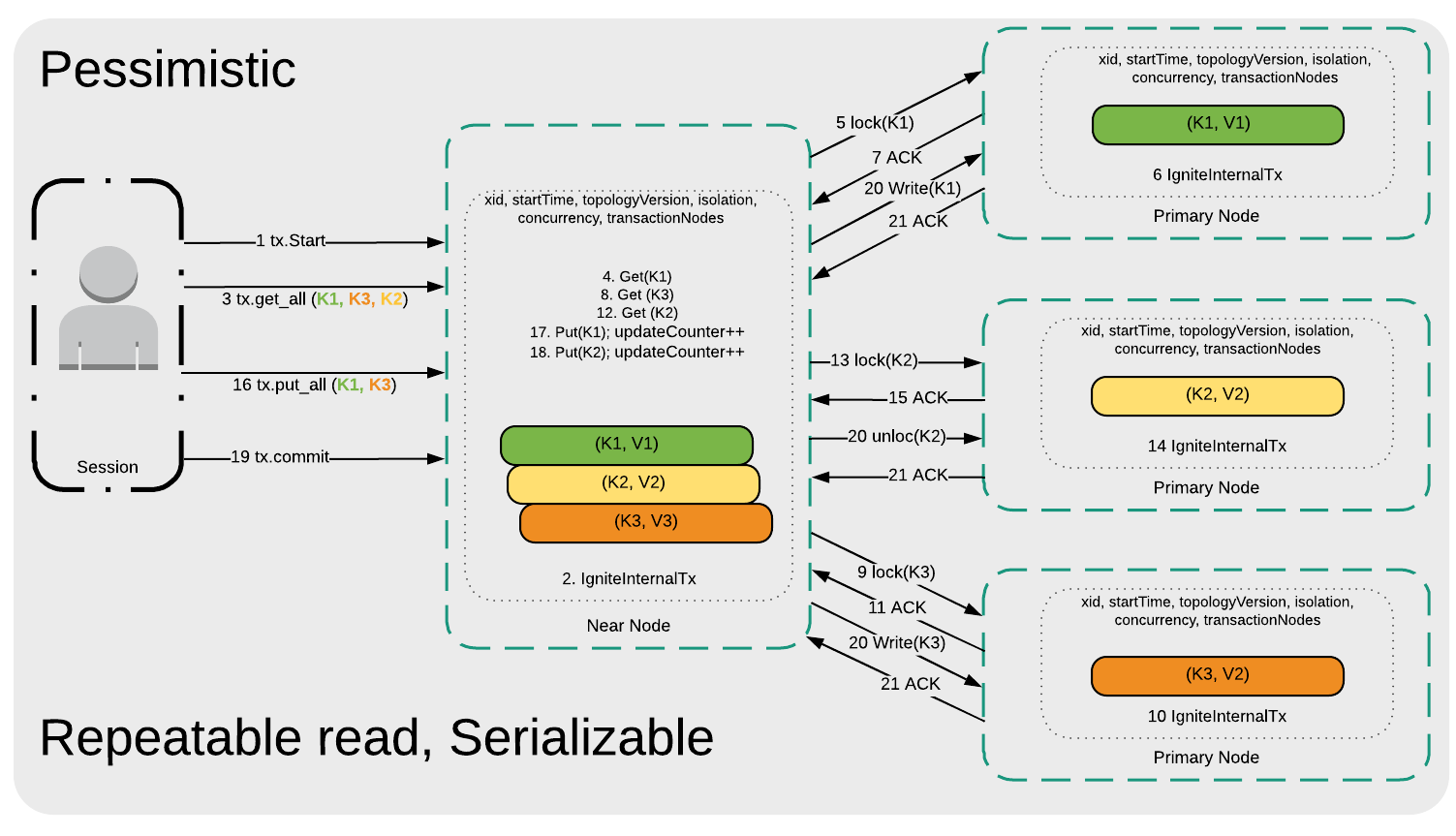 The pessimistic mode holds locks until the transaction is finished and prevents access to locked data from other transactions. Optimistic transactions in Ignite might increase the throughput of an application by lowering contention among transactions by moving lock acquisition to a later phase. 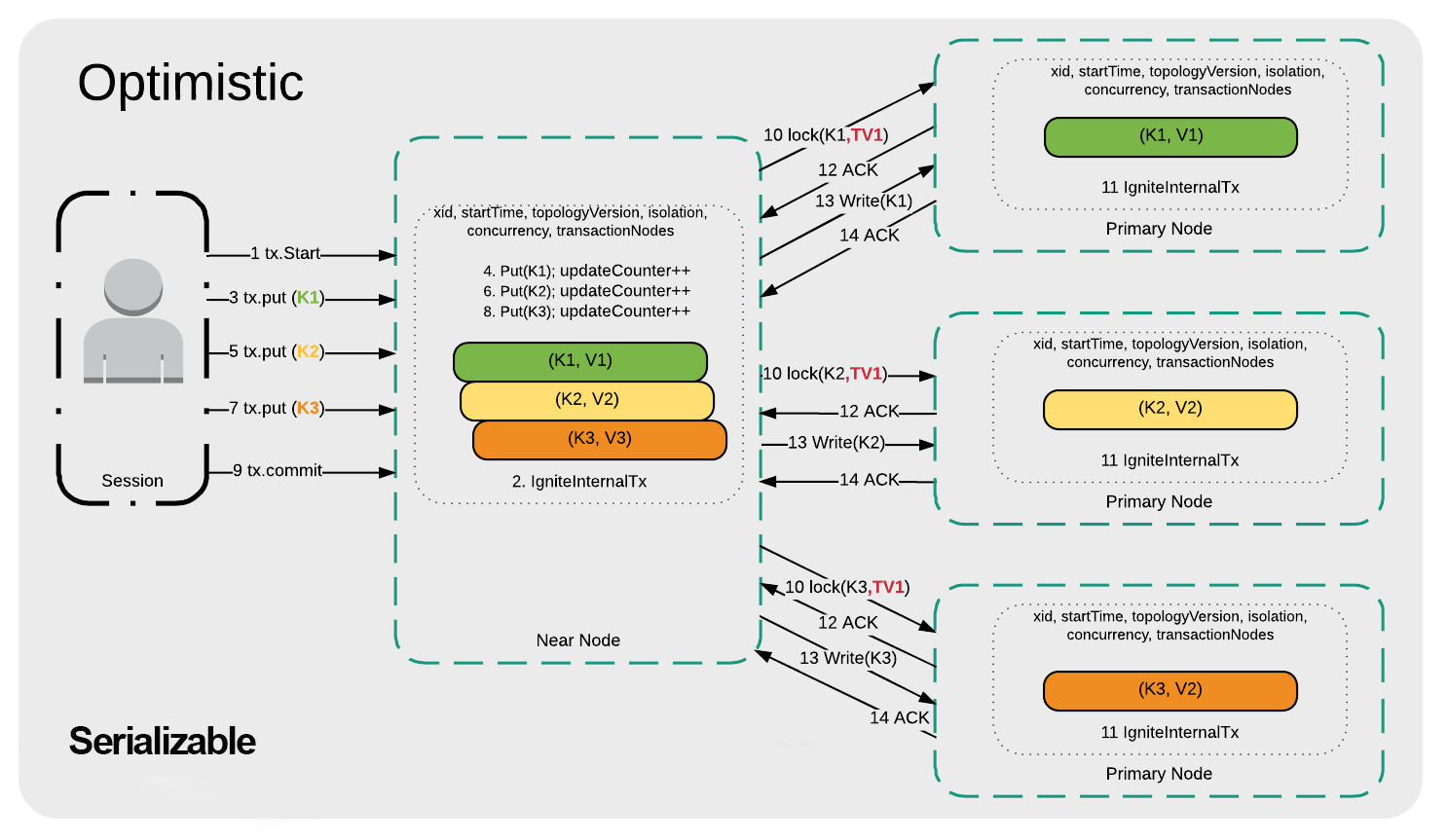 On the other hand, repeatable read and read committed optimistic transactions never check if a version of an entry is changed. This mode (Figure 9) might bring extra performance benefits but does not give any atomicity guarantees and, thus, is rarely used in practice. 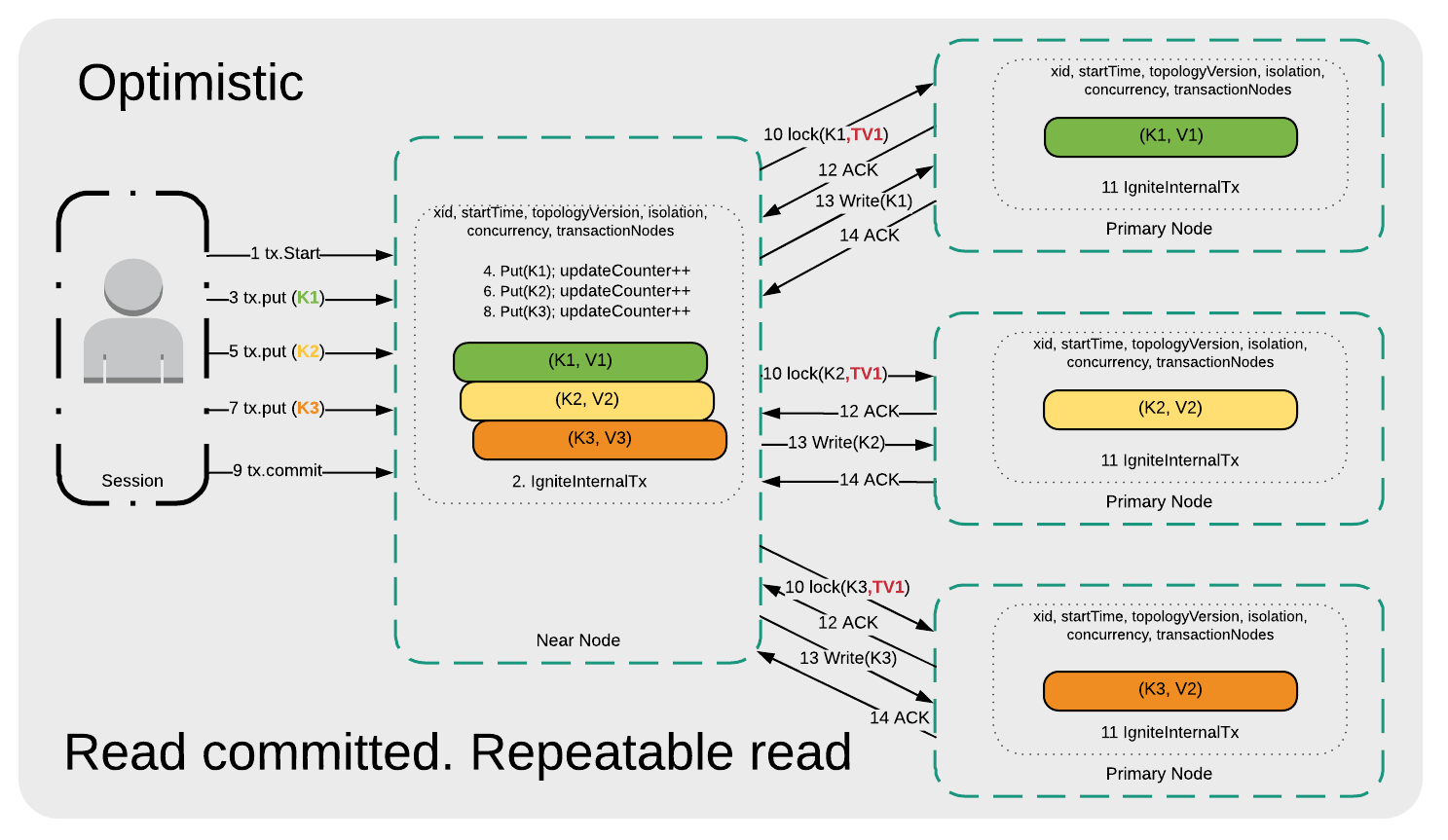 Now let's review the entire lifecycle of a transaction in Ignite. We will assume that the cluster is stable and no outages happen. 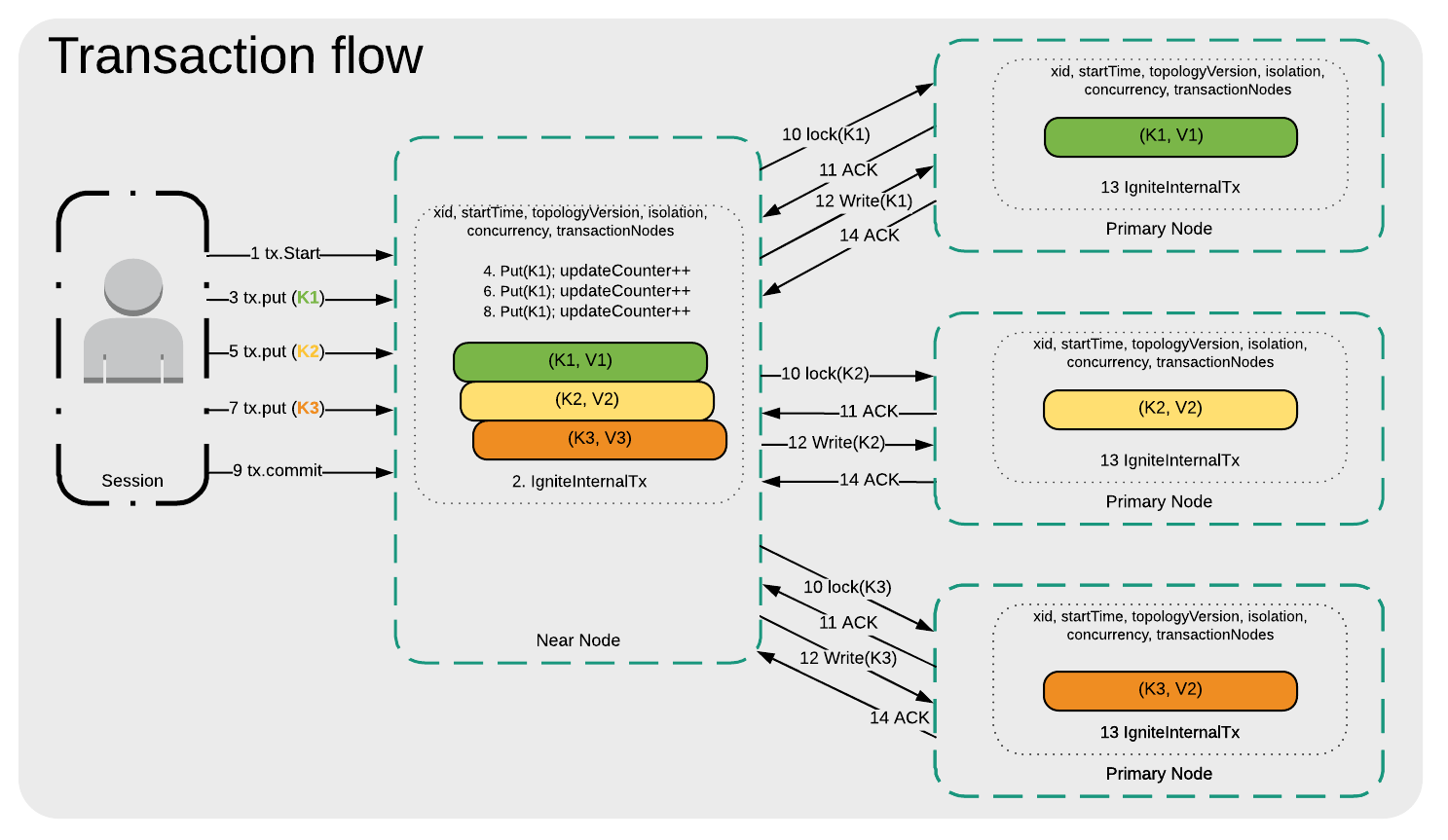 Figure 10.
In Figure 10, the transaction starts once tx.start() (Step 1) method is called by the application which results in the creation (Step 2) of a structure for transaction context management (also known as IgniteInternalTx). Additionally, the following happens on the near node side:

Next, the transaction status is set to "active" and Ignite starts executing read/write operations that are a part of the transaction using the rules of either optimistic or pessimistic mode and specific isolation levels.

When the application executes the tx.commit() method (Step 9 in Figure 10) the near node (transaction coordinator) initiates the 2-phase commit protocol by preparing the "prepare" message enclosing information about the transaction's context into it.

As a part of the "prepare" phase, every primary node receives information about all updated or new key-value pairs and about the order the locks have to be acquired (the latter depends on a combination of locking modes and isolation levels).

The primary nodes in their turn perform the following in response to the "prepare" message:

After that, the near node sends the "commit" message, waits for an acknowledgment and moves the transaction status to "committed".

Ignite allows setting a timeout for a transaction. If transaction's execution time exceeds the timeout, then the transaction will be aborted. 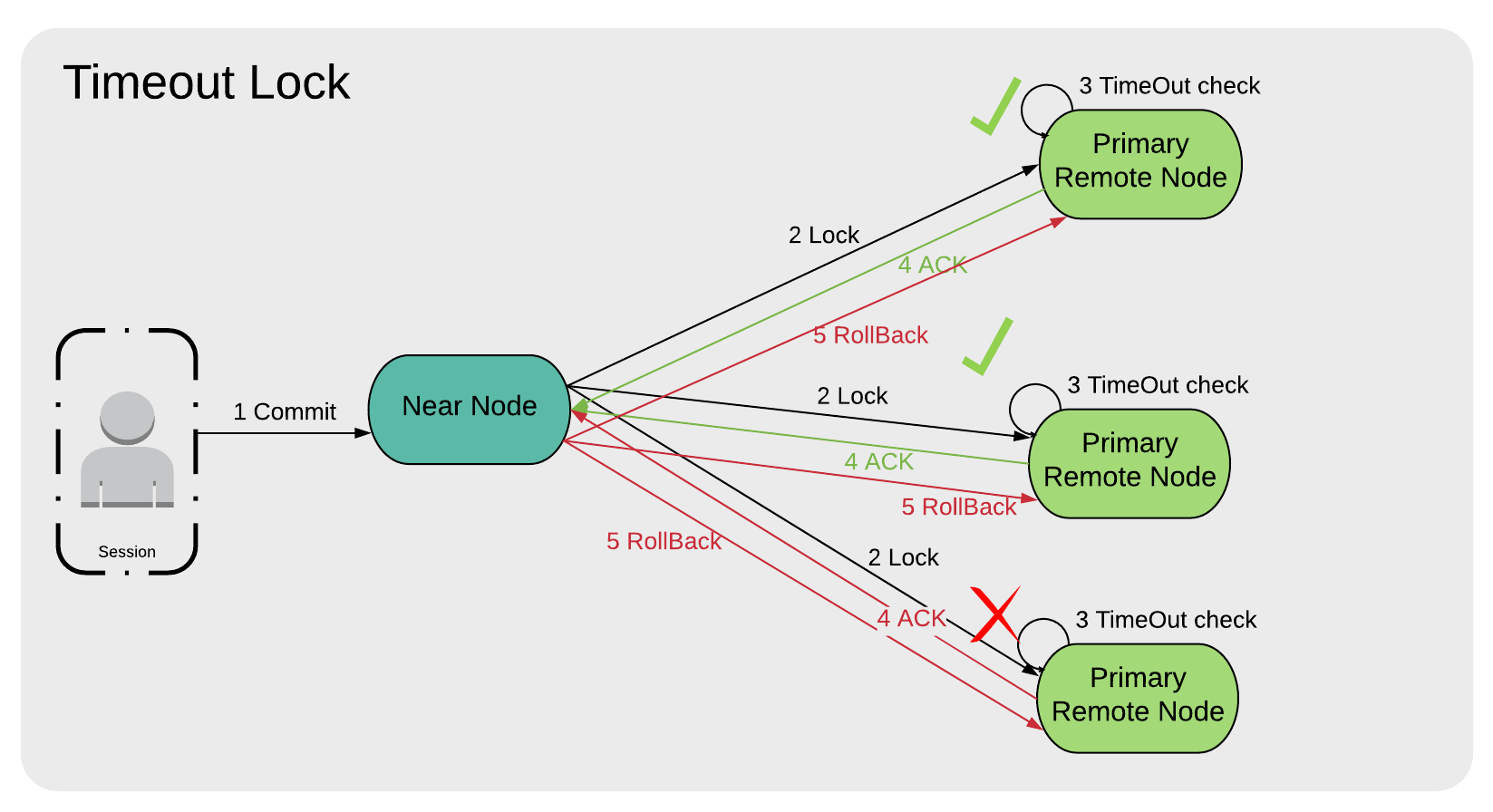 If the total execution time has exceeded the timeout on any of the participating nodes, then a primary node, where the timeout elapsed, sets a special flag instructing the transaction coordinator to initiate a transaction cancellation.

The section explains how Ignite tackles failover situations or outages that might happen while transactions are being executed. 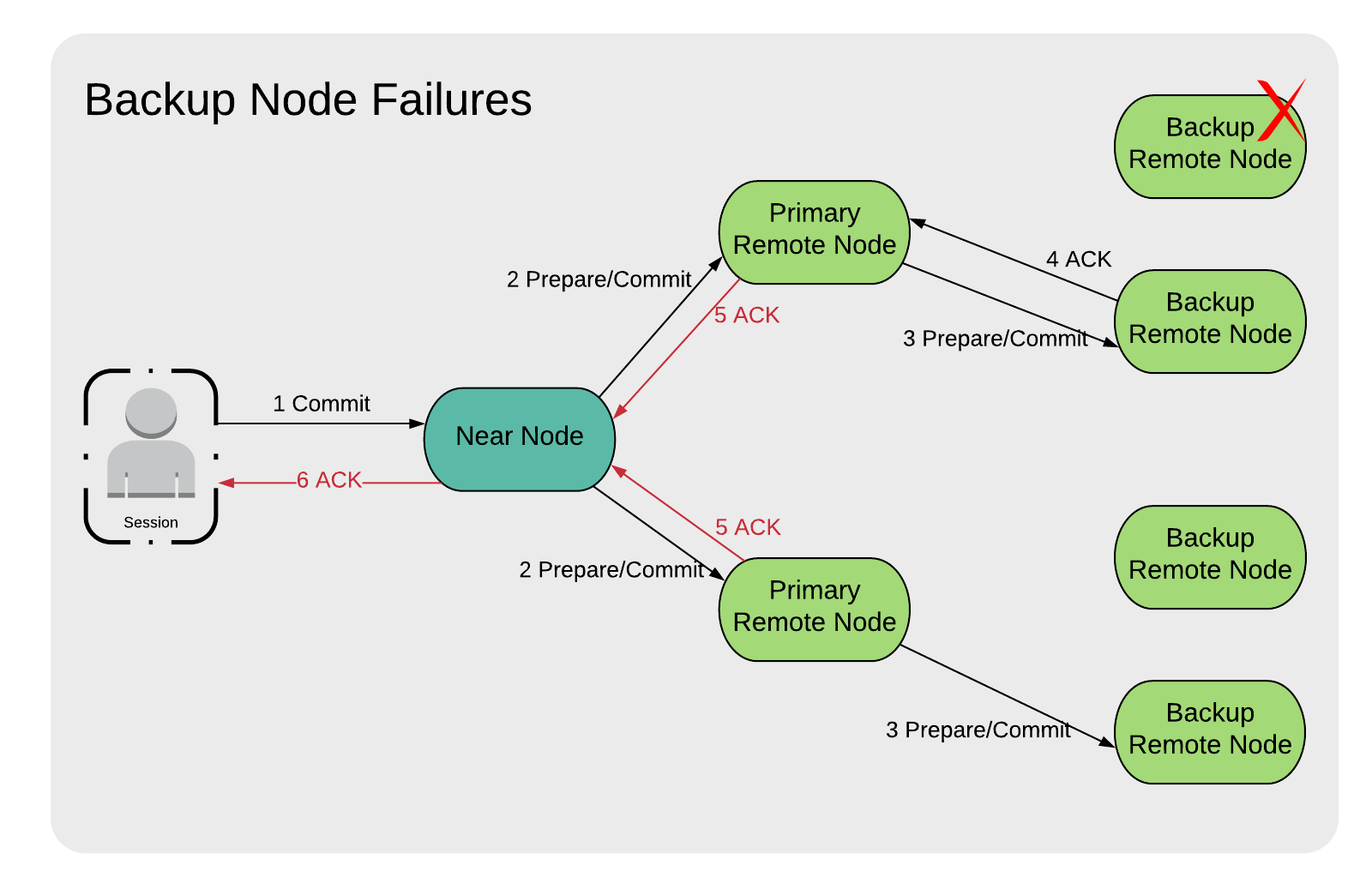 The simplest failure scenario is when a backup node fails on either the "prepare" or the "commit" phase. Nothing has to be done by the Ignite transactional subsystem. Transaction modifications will be applied to the remaining primary and backup nodes (Figure 12) and a new backup node for missing partitions will be elected after the transaction is over and that will not preload all the up-to-date data from a respective primary node. 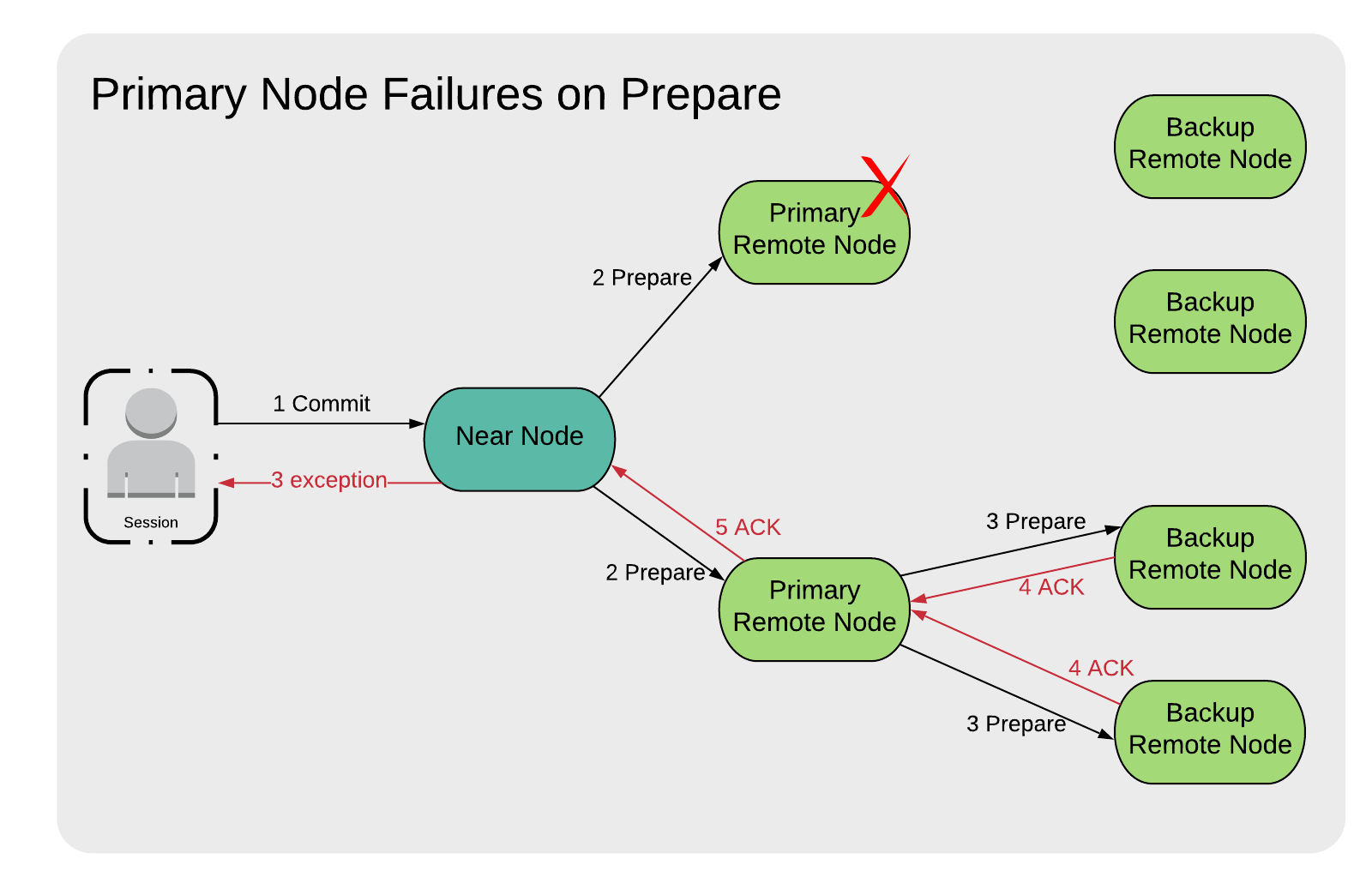 If a primary node failed before or on the "Prepare" phase, then the transaction coordinator raises an exception (Figure 13) and it's up to the application to decide what to do next - restart the transaction or process this exception differently.

If a primary node failed after the "prepare" phase, then the transaction coordinator will be waiting for an extra NodeFailureDetection response from respective backup nodes (Figure 14). 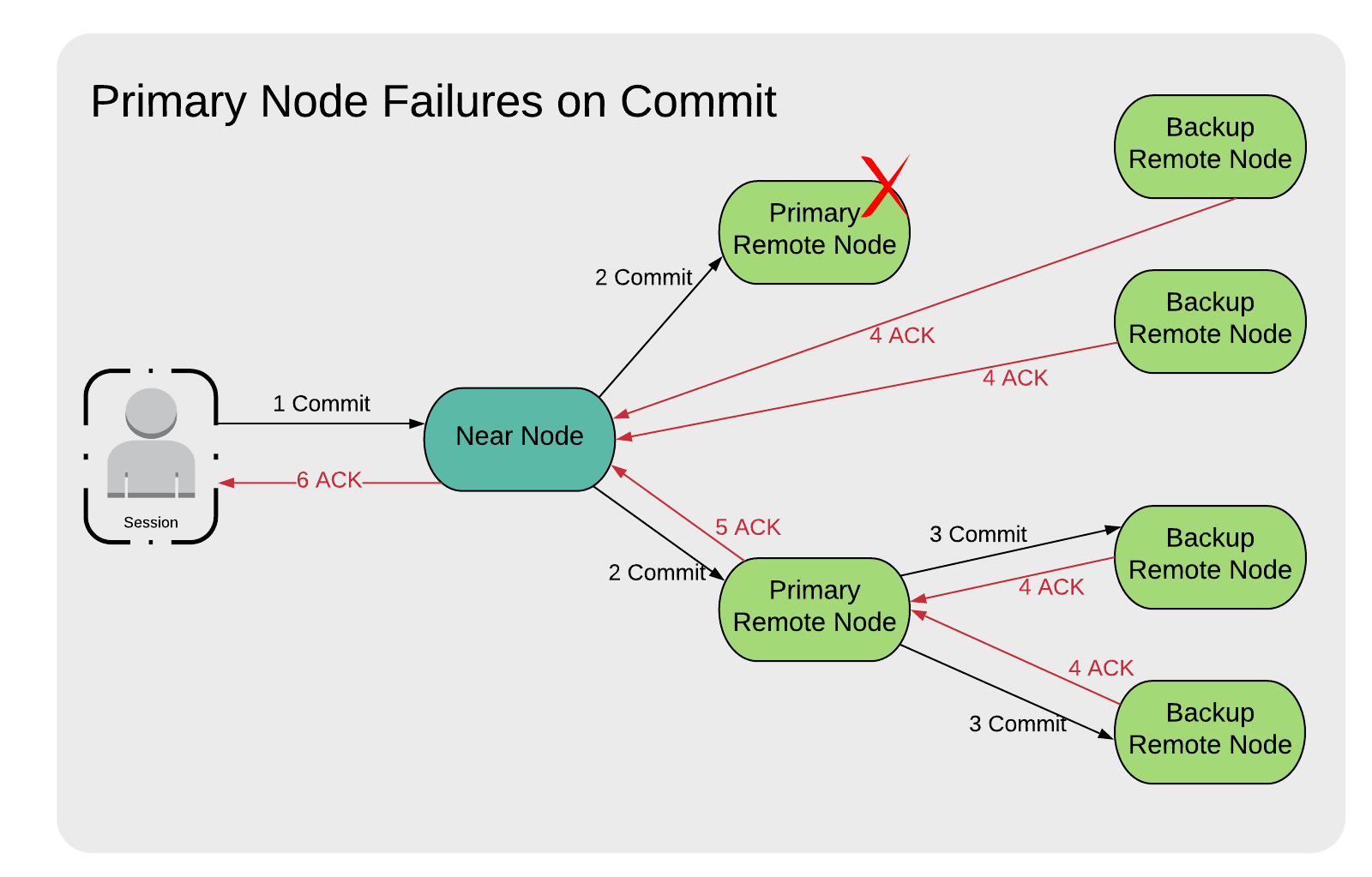 Once the backup nodes detect the failure they will send a message to the transaction coordinator confirming that they successfully committed the changes and no data loss happened because there is still an extra backup copy available for application usage.

Next, the transaction coordinator finishes the transaction, the topology is changed (due to the primary node loss) and the cluster will elect a new primary for the partitions that were stored on the previous one.

Handling of transaction coordinator failures is a bit trickier because every remote node (primary and backup) is aware of the transaction's context related to it and doesn't know the overall transaction state. It is also possible that some of the nodes have already received "commit" message while the others haven't, as shown in Figure 15. 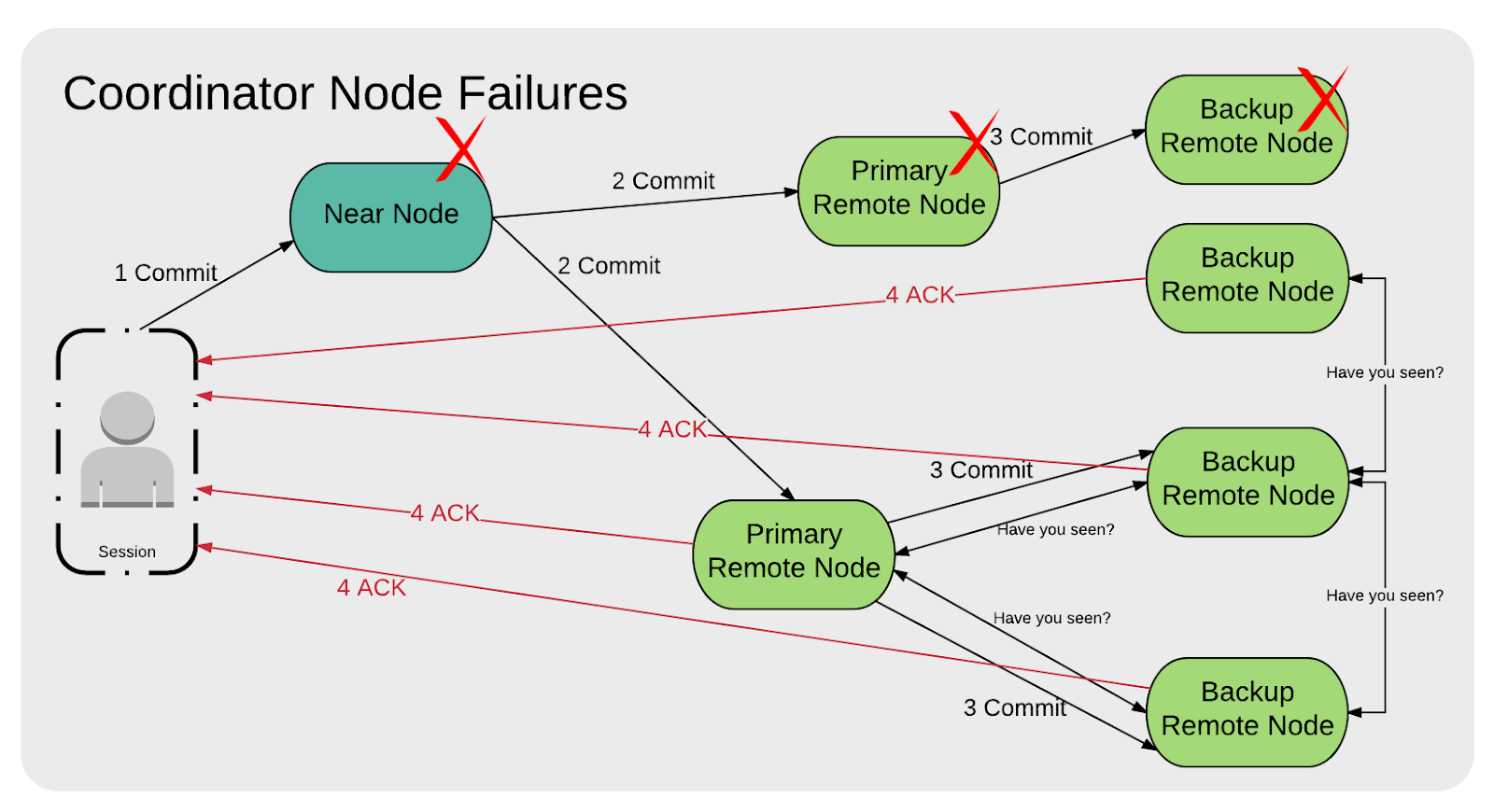 To solve this situation, the primary nodes exchange internal status with each other to find out the overall transaction state. For instance, if one of the nodes responds that it hasn't received a "commit" message, then the transaction will be rolled back globally.

* Even though inconsistent read is possible within the transaction logic, it will be validated during commit phase and the whole transaction will be rolled back.