Kafka typically uses zero-copy optimization for transferring data from the file system cache to the network socket when sending messages from brokers to consumers. This optimization works only when the consumer is able to understand the on-disk message format.

An older consumer would expect an older message format than what is stored in the log. Broker needs to convert the messages to the appropriate older format that the consumer is able to understand (i.e. down-convert the messages). In such cases, the zero-copy optimization does not work as we need to read the messages from the file system cache into the JVM heap, transform the messages into the appropriate format, and then send them over the network socket. We could end up in situations where this down-conversion process causes Out Of Memory because we end up copying lot of data into the JVM heap.

Following are the goals of this KIP:

A new broker configuration will be provided to completely disable down-conversion on the broker to satisfy FetchRequest from client. This configuration provides an added measure to the optimizations discussed in this KIP.

We will introduce a message chunking approach to reduce overall memory consumption during down-conversion. The idea is to lazily and incrementally down-convert message "chunks" in a batched fashion, and send the result out to the consumer as soon as the chunk is ready. The broker continuously down-converts chunks of messages and sends them out, until it has exhausted all messages contained in the FetchResponse, or has reached some predetermined threshold. This way, we use a small, deterministic amount of memory per FetchResponse.

The diagram below shows what a FetchResponse looks like (excluding some metadata that is not relevant for this discussion). The red boxes correspond to the messages that need to be sent out for each partition. When down-conversion is not required, we simply hold an instance of FileRecords for each of these which contains pointers to the section of file we want to send out. When sending out the FetchResponse, we use zero-copy to transfer the actual data from the file to the underlying socket which means we never actually have to copy the data in userspace. 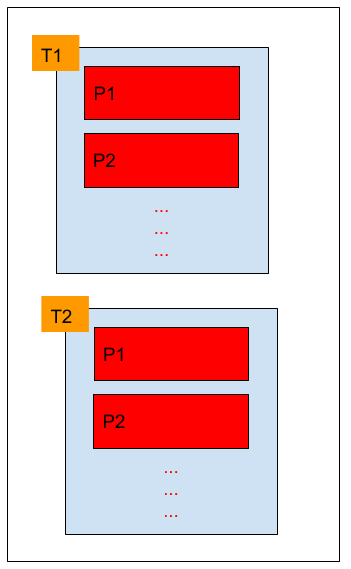 When down-conversion is required, each of the red boxes correspond to a MemoryRecords. Messages for each partition are read into JVM heap, converted to the appropriate format, and we hold on to this memory containing converted messages till the entire FetchResponse is created and subsequently sent out. There are couple of inefficiencies with this approach:

The idea with the chunking approach is to tackle both of these inefficiencies. We want to make the allocation predictable, both in terms of amount of memory allocated as well as the amount of time for which the memory is kept referenced. The diagram below shows what down-conversion would look like with the chunking approach. The consumer still sees a single FetchResponse which is actually being sent out in a "streaming" fashion from the broker.

The down-conversion process works as follows:

With this approach, we need temporary memory for to hold a batch of down-converted messages till they are completely sent out. We will limit the amount of memory required by limiting how many message batches are down-converted at a given point in time. A subtle difference also is the fact that we have managed to delay the memory allocation and the actual process of down-conversion till the network thread is actually ready to send out the results. Specifically, we can perform down-conversion when Records.writeTo is called.

At a high level, LazyDownConvertRecords looks like the following:

Kafka response protocol requires the size of the entire response in the header. Generically, FetchResponse looks like the following:

HeaderSize and MetadataSize is always fixed in size, and can be pre-computed. TopicPartitionDataSize is a variable portion which depends on the size of the actual data being sent out. Because we delay down-conversion till Records.writeTo, we do not know the exact size of data that needs to be sent out.

To resolve this, we will use an estimate Spre (defined below) as opposed to the actual post-downconversion size (Spost) for each topic-partition. We also commit to send out exactly Spre bytes for that particular partition. In terms of the above equation, the size will be computed as:

Given this, we have three possible scenarios:

To ensure that consumer keeps making progress, Kafka makes sure that every response consists of at least one message batch for the first partition, even if it exceeds fetch.max.bytes and max.partition.fetch.bytes (KIP-74). When Spre < Spost (second case above), we cannot send out all the messages and need to trim message batch(es) towards the end. Because Spre is at least as big as the size of first batch after down-conversion, we are guaranteed that we send out at least that one batch.

Determining number of batches to down-convert

A limit will be placed on the size of messages down-converted at a given point in time (what forms a "chunk"). A chunk is formed by reading a maximum of 16kB of messages. We only add full message batches to the chunk. Note that we might have to exceed the 16kB limit if the first batch we are trying to read is larger than that.

Even though the chunking approach tries to minimize the impact on memory consumption when down-conversions need to be performed, the reality is that we cannot completely eliminate its impact on CPU and memory consumption. Some users might want an ability to completely block older clients, such that the broker is not burdened with having to perform down-conversions. We will add a broker-side configuration parameter to help specify the minimum compatible consumer that can fetch messages from a particular topic (see the "Public Interfaces" section for details).

There should be no visible impact after enabling the message chunking behavior described above. One thing that clients need to be careful about is the case where the total response size is greater than the size of the actual payload (described in Spre > Spost scenario of the chunking approach); client must ignore any message who size exceeds the size of the total response.

There are two main things we want to validate with the changes brought in by this KIP.

The following describes the test setup for each of the points above and the corresponding findings.

The aim of the test was to prove that we have a finite bound on the amount of memory we consumer during down-conversion, regardless of the fetch size. The test setup is described in detail below.

The aim of this test was to study the effect on throughput as we vary the chunk size, and to find the optimal chunking size.

The following table outlines the findings:

The average throughput without the chunking approach (i.e. without this KIP) was found to be 178.9MBPS. Given this, the default chunk size will be configured to 128kB.

We considered several alternative design strategies but they were deemed to be either not being able to address the root cause by themselves, or being too complex to implement.

Kafka brokers are typically deployed with a much smaller JVM heap size compared to the amount of memory available, as large portions of memory need to be dedicated for the file system cache.

The primary problem with down-conversion today is that we need to process and copy large amounts of data into the JVM heap. One way of working around having to allocate large amount of memory in the JVM heap is by writing the down-converted messages into a native heap.

We can incrementally read messages from the log, down-convert them and write them out to native memory. When the entire FetchResponse has been down-converted, we can then put the response onto the network queue like we do today.

Expose a broker-side configuration message.max.bytes.downconvert, which is the maximum amount of memory the broker can allocate to hold down-converted messages. This means that a message fetch that requires down-conversion would be able to fetch maximum of message.max.bytes.downconvert in a single fetch. If required memory is not available because it is already being consumed by other down-converted messages, we block the down-conversion process till sufficient memory becomes available.

The implementation for this could be based on the MemoryPool model, which essentially provides an interface to manage a fixed amount of memory. Each message that requires down-conversion requests for memory from the underlying MemoryPool and releases back to the pool once the message is sent out to the consumer.

To reduce the overall amount of memory consumed by down-converted messages, we could consider compressing them (if they are not already compressed to begin with).