This KIP proposes adding sliding windows to give users an efficient way to do sliding aggregation.

Creating a new finals class SlidingWindows, to add aggregation flexibility and features for users. Sliding windows will have an inclusive start and end point and each window will be unique, meaning that each distinct set of records will only appear in one window. This is in contrast with hopping windows, which can mimic sliding windows with an advance of 1ms, but result in many overlapping windows, as shown below. This causes expensive aggregation calculations for each window, whereas for the sliding windows, aggregations are only done for each unique window, cutting down significantly on the amount of work required. 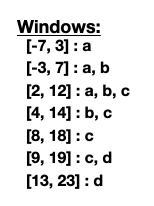 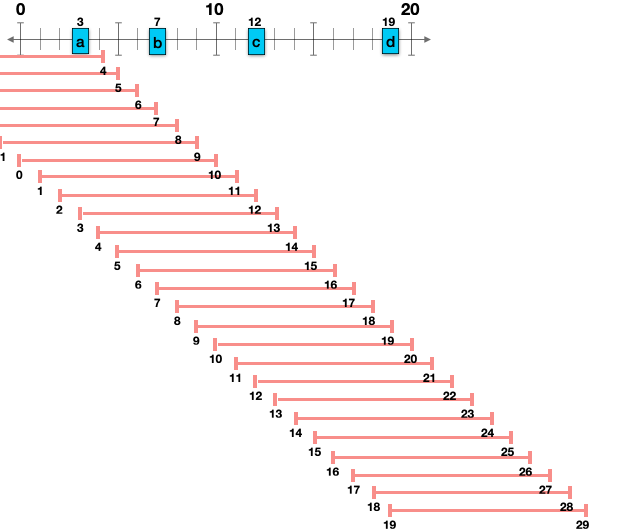 Sliding window aggregation to create windows of twenty seconds with a grace period of 30 seconds.

Send an alert if the window has fewer than 4 records, using suppression to limit all but the final results of the window. Original example here, suppression details here.

When users want to query results from IQ, they need to know the start time of the window to get results. For most users it will be target time - timeDifference, since windows are defined backwards in SlidingWindows. For example, if there's an incident at 9:15am and they have a time difference of 10 minutes, they're looking for a window with the start time of 9:05. If they don't have the exact time, they can use a range query and traverse through the results to get the one they're looking for. After KIP-617, users will be able to traverse backwards through their range query, making accessing the latest window simpler.

To process a new record, there are three major steps.

With Sliding Windows, a new record creates two new windows: one that ends at the record's timestamp, and one that starts 1ms after the record's timestamp. The first window will contain the new record, while the second will not. This is shown with record b in figure 3. These windows were chosen to ensure that for all the records, every combination of possible records given the time difference will be created. This allows for easy aggregation when creating new windows, as any aggregation needed in a new window will have already been calculated in an existing window, explanation here. For a new window that overlaps with existing records (record a in figure 3), these records will be aggregated and added to the new window's value.

Figure 3: New windows of time difference 10ms defined for b

Any already created windows that the new record falls within will be updated to have an aggregation that includes the new records value. This requires doing a scan through the WindowStore to find these windows, similar to the SessionWindow scan required for aggregating SessionWindows, and updating the values.

Records that come out of order will be processed the same way as in-order records, as long as they fall within the grace period. Two new windows will be created by the out-of-order record, one ending at that record's timestamp, and one starting at 1ms past that record's timestamp. These windows will be updated with existing records that fall into them by using aggregations previously calculated. If either of these windows are empty, or empty aside from the current record's value, this will be taken into account. Additionally, any existing windows that the new record falls within will be updated with a new aggregation that includes this out-of-order record.

As with hopping windows, sliding windows will emit partial results as windows are updated, so any window that gets a new aggregate or an updated aggregate will emit. This feature can be suppressed through suppression, which allows users to ignore all results except for the final one, only emitting after the grace period has passed. In the future, suppress can be updated to emit results for windows that are still within the grace period but whose start and end points are both earlier than stream time.

Implementing a new feature, should be compatible with all existing features.

Other Types of Sliding Windows: