Flaky tests are defined as tests that experience failures intermittently. Flakiness arise from many causes ranging from numeric errors to race conditions. The existence of flaky tests are both meaningful and harmful at the same time: they are revealing possible problems in our code, but it's also costing extra CI builds to be run. Flaky tests also need to be evaluated on an individual basis to determine the correct approach to resolving them, which may involve fixing code that causes the problem to occur, or increasing the tolerance of the test.

As of the creation of this tool, there is an effort to fix the currently known flaky tests, but we want to ensure that in the future we are not continuing to add flaky tests to our code base. Our solution to the problem will be to try to identify flaky tests, before they go into the code base and cost us CI runs, so that someone can look at them and make further decisions. This will involve automatically detecting tests that have been changed by a pull request and running those tests a sufficient number of times to determine if they are flaky or not. If a flaky test is detected the pull request will be rejected or in some way marked as flaky so that the original committer can have ownership over the fix.

In theory, determining that a test isn't flaky would mean running the test an infinite number of times to confirm that it always succeeds; however, since we are limited in the number of test trials we can run, we need to choose a number that will balance both our confidence in the flakiness of the test and the resource consumption of the detection process. On CI, the tool will operate with a time bank, which will be distributed among tests, in order to ensure that it does not increase the duration of PR checks.

This project is currently aimed towards unit tests written in python, since these currently comprise the majority of out tests on CI. While this tool could theoretically be used to test integration tests, the time required to run these tests would make such coverage impractical. It also will not cover things such as test-order dependency or flakiness that is only reproducible in a specific environment. The main goal of this project is to try to provide a baseline coverage that can catch most flakiness with low effort and high impact.

The flaky test bot is composed of three components: Diff Collator, Test Selector, and Flakiness Checker. These stages each serve as a part of the flaky test detector, but have been decoupled from each other. Each stage exposes human-understandable input and output to facilitate debugging and extensibility. For example, the the flakiness checker may be useful as a standalone tool for developers working on flaky test fixes or implementing new test cases. 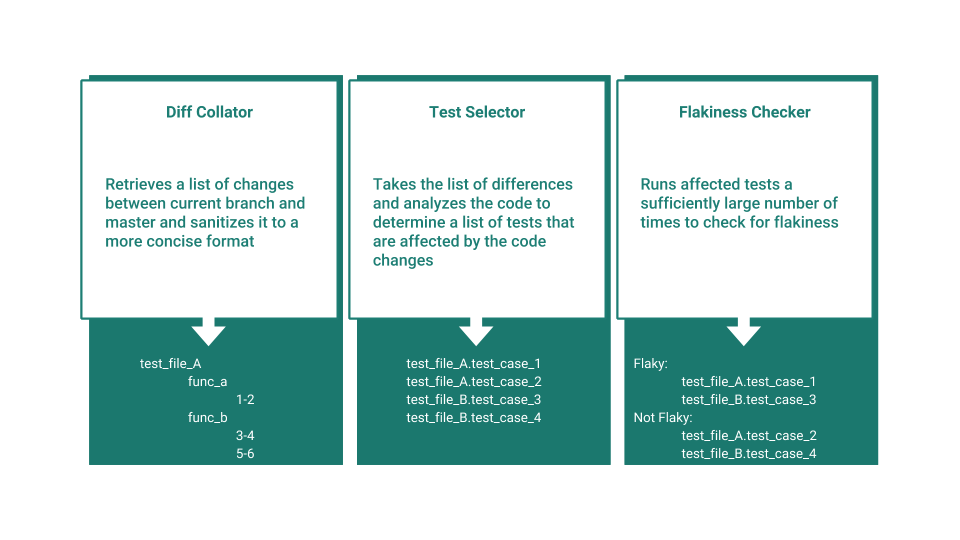 The purpose of the diff collator is to retrieve a list of changes that have been made to the code and sanitize it before passing it to the next stage. This is done by taking the output of git diff and parsing it to obtain file names, top-level functions, and line numbers for each code change. For the purposes of the flaky test detector, only file and function names are needed for the dependency analyzer.

The dependency analyzer must be able to handle several different cases when it comes to codes changes:

As mentioned above, cross-file dependencies are handled using a config file. below is an example of such a file.

Each file with other file dependencies is listed along with a list of its dependencies. In this example, test_gluon_gpu.py depends on three files: test_gluon.py, test_loss.py, and test_gluon_rnn.py. Currently this is done manually since the structure of our tests rarely changes; however, an automated solution may be worth implementing.

The dependency analyzer takes as input a list of function names and associated files in the format: <file>:<function-name> and return a list, with the same format, or top-level functions with associated files that are dependent on those in the input.

The flakiness checker tool is a script that checks a test for flakiness by running it a large number of times. Its primary purpose is to serve as a component of the automated flaky test detection system. However, it can also be used manually by developers for flaky test fixes or when modifying test files. Before submitting a new test case or a modification to an existing test, run the flakiness checker script to test for flakiness.

Below is a table indicating the number of runs needed to achieve a given confidence level with a given chance that a test passes. As a default, on CI we are using a value of 10,000 to check tests. This number will give us a relatively high confidence that we are catching flakiness even if it only occurs

where <test-specifier> is a string specifying which test to run. This can come in two formats:

-s SEED, --seed SEED use SEED as the test seed, rather than a random seed

The integration plan for this project can be found here: Flaky Test Bot Integration Plan. This tool will be run as a Jenkins job that will be triggered on pull requests. The Jenkins job executes the diff collator and dependency analyzer in one step to detect modified or added test cases. If any tests are selected, then MXNet is compiled and the flakiness checker is run to check the tests for flakiness.