Although data parallel is used in MXNet, its performance is not good enough for the less computational intensive operators in the inference stage, especially for the small batchsize. This phenomena widely exists in many popular models, such as googlenet, wide deep and inception v3. For example in the wide deep model, 26 embedding OPs are executed in sequence and each one only consumes very little computing resource. So, the model level performance is sub-optimal since the long execution path in the low-parallelism operators.

The primary goal is to improve the performance by paralleling inefficient and independent OPs. In this proposal, only the situation that OPs comes to/from one OP is covered and other hierarchical patterns will be considered in the future. The change in this proposal will grantee that the modification is transparent to users and does not change existing scripts, models.

The approach can work for all backends by sharing the same subgraph path. But in practice some adjusts in the interfaces and implementations are still needed, like the difference in the hardware mapping where the CPU can assign the OP to different cores and GPU needs to multiple stream. Thus, in the first step, the CPU and MKLDNN backend are enabled.

Take the wide deep model for example, after split, data flow is divided to 26 and each of them will be handled by single embedding OP. In ordinary process, these 26 embedding OPs will be executed one by one when running inference, and data parallel will be used in its kernel function. Now we replace the 26 OPS using one parallel OP which can handle inference in OP level parallel. 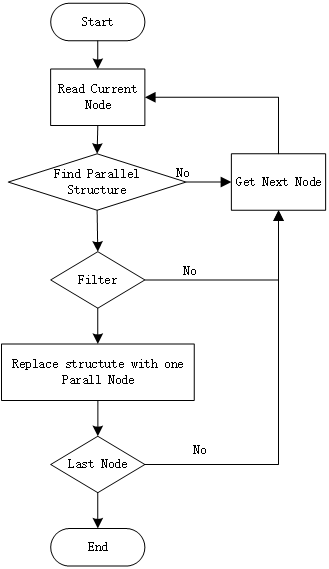 The key bock in Fig.2 is Filter which is used check whether the finding parallel structure meet the metrics. It must guarantee that the operator is thread safe; otherwise, it may fails during simultaneous execution by multiple threads.  From MKL-DNN 1.0 all MKLDNN operators will be thread safe and can be executed in parallel. But now, we need to maintain a whitelist for thread safe operators. There are some other conditions which used to fine tune the performance such as paralleled Node number >= threshold will cause performance drop. Environment variable may be add by user to add/remove whitelists in future release.

The main body of parallel op forward function is accelerate by OMP multithread as Figure3. When do the inference, several operators run parallel. Such as in the wide deep model, 26 embedding forward function are called simultaneously. By this parallel in OP level, performance is improved a lot.

No new APIs were added or modified.

We add a pass for backend, which have no backward compatibility issue when deactivate. When inactive, we may consider the compatibility for different passes

In wide and deep model, we replace 26 embedding Ops with one parallel_op as Fig. 1. When we do inference on SKX-8180 1 socket with batch size 1 and OMP thread 28, performance as Table 1 shows. Parallel OP has a 3.7X speedup .

Table1 performance for Embedding and SgParallel_OP

MKLDNN OPs will be supported since version1.0 that will make Intel MKL-DNN primitives stateless and thread safe: the same primitive can be executed in multiple independent threads as long as different threads use different scratchpads.  So we can accelerate more models such inception and googlenet.

Tests need to cover 2 parts. First one is the graph conversion test. We need to ensure that:

Another one is the unit test for OPs in parallel OP whitelist. All these OPs should be thread-safe. The test should cover all supported OPs and make sure they can provide the accurate result.

3. Support structure as Fig.5. In this Fig, all OPs to be replaced has input from OP X.

4. Support all MKL-DNN OP, all OPs which support parallel add to whitelist.