DL models, besides compute intensive operations like convolutions and fully connected layers, feature a lot of simple pointwise (aka elementwise) operations (like elementwise addition etc.). Performance of those operations is fully memory bandwidth bound and so limit speedups from newer GPU hardware, which typically has high compute/memory bandwidth ratio. There are multiple attempts (e.g. TVM) ongoing to use compiler technology in order to deal with this and other performance problems. However, integration of e.g. TVM into MXNet is a long term effort and there is a need for a simpler, more focused, approach to deal with this problem in the meantime. This document proposes such approach.

The approach as described in the previous paragraph works well when applying to inference workloads. However, when writing PoC code for backward pass fusion for training, we encountered problems with shape and type inference of backward nodes, which required additional changes and helper ops. This section describes the problem encountered and proposed solution to it.

Shape and type inference of backward nodes - intro to the problem

In MXNet, backward nodes generally do not have their own InferShape and InferType functions. Instead, they rely on their forward nodes (accessed via control deps in NNVM graph) to get the attributes (since the input and output gradients from backward node have the same attributes as, respectively, outputs and inputs to forward node). What is more, it is not really possible to introduce those functions to every backward op: to illustrate that, let us take a Cast op. This op has dtype parameter, which is a type of its output. The type of its input needs to come from the previous ops in the graph - which is OK. However, for the backward of Cast, this same dtype parameter gives information on the input gradients to the op, not the output, which makes it impossible to do type inference. The same problem happens with shape inference and reshape operation.

This is important problem when applying fusion that is independent on forward and backward pass, because what may happen is that the forward node that some backward node relies on for attribute inference is fused away and no longer accessible. To demonstrate those problems (and the proposed solution) let us look at 2 very simple networks: out = a + a * b and out = a * b.

The problem and solution, part 1

To illustrate the first part of the problem and solution to it, in this section we will assume fusion happening only on forward pass and network out = a + a * b.

The original graph (full, with both forward and backward) of this network looks like this (solid arrows are dataflow connections, dotted arrows are control dependencies): 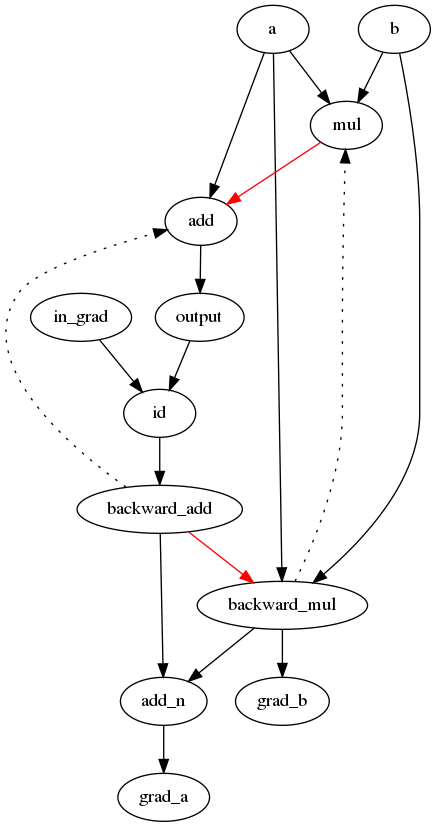 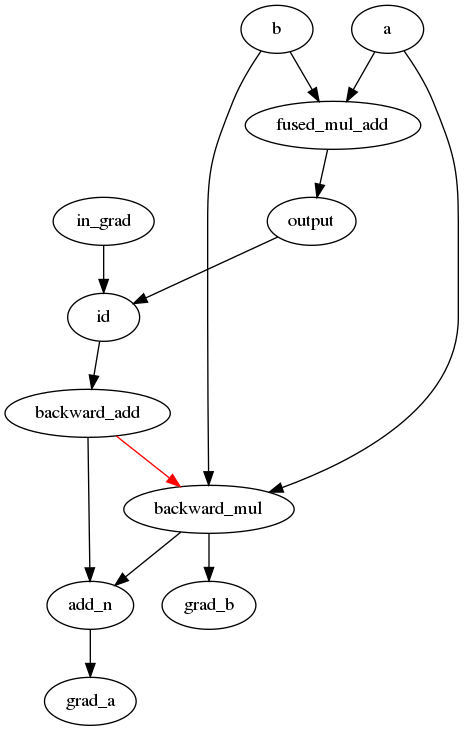 Now red edge in the forward graph is fused away and backward nodes do not have enough info anymore to infer the attributes of their corresponding red edge - infershape and infertype fail.

The proposed solution to this problem is introduction of new nodes in the graph that contain pointers to the fused op and node_id of the proper forward node in the fused op's subgraph (dashed line is a pointer, not an actual edge in the graph!): 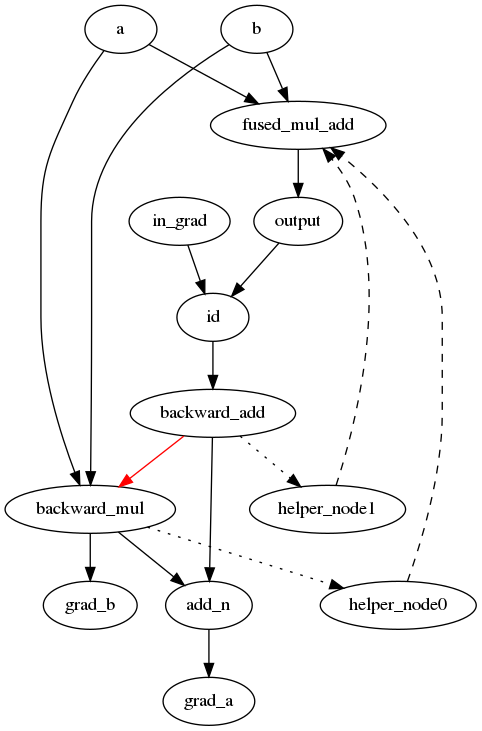 The reason for using pointers instead of graph edges will become apparent in the next section.

The problem and solution, part 2

This time we will look into a network out = a * b and full (forward and backward) fusion. The original graph: 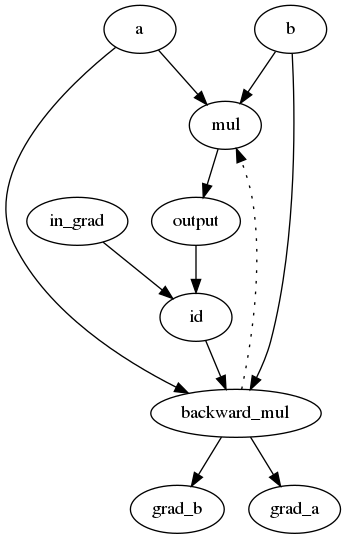 Here the fusion does not happen on the forward pass, because mul is the only pointwise operation there (and so there is nothing to fuse). However, fusion can happen on the backward side, since there are 2 operations there: identity and backward_mul. The fused graph looks as follows: 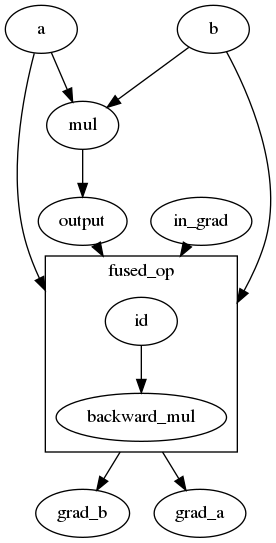 This time problem happens inside the subgraph of fused op - the backward_mul node inside the subgraph does not have any connection to the mul node ( (since they are separate graphs), and therefore it cannot use its attributes. What is more, even if such connection existed, the attributes are stored inside a graph instead of a node, so they would still be inaccessible from inside a subgraph.

The proposed solution here is similar to the one from the previous section. 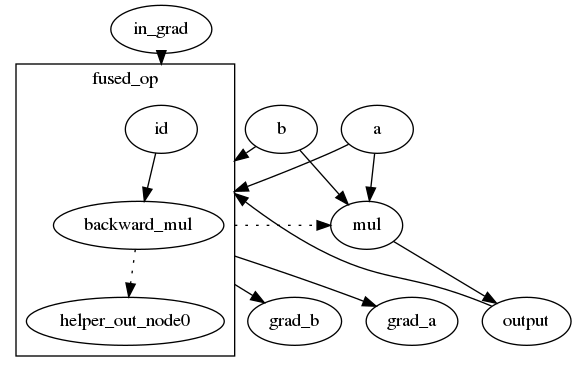 Here during outer graph's inferattr, fused op gets the attribute values from all its control deps (there is only 1, mul) and then launches its own internal inferattr. There, backward_mul requests the values from its helper, which grabs values for dependency 0 from the fused op.

The helper nodes are only metadata nodes, they don;t have inputs, outputs nor even FCompute function. Therefore they should not be considered when doing graph preparation for execution. A new option was added to NNVM, TIsGhost, to mark ops that should not exist in IndexedGraph. Since all of the attribute passes as well as execution relies solely on the IndexedGraph and not actual Graph, this is enough to make those nodes invisible to the rest of MXNet.