Note: Please feel free to comment on the Google Doc. We will merge the finalized proposal back here.

The ring Reduce communication pattern used by NCCL (Figure 1a) and Parameter server Reduce (Figure 1b) currently used in MXNet are not optimal for small batch sizes on p3.16xlarge instances with 8 GPUs.

Note: To clarify, usage of "parameter server" refers to single-machine communication rather than the distributed sense the term is usually used in. It is enabled by adding the flag "--kvstore device". 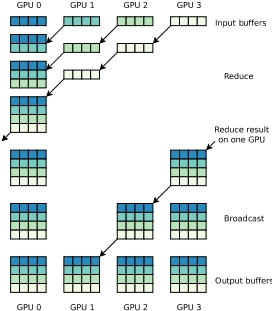 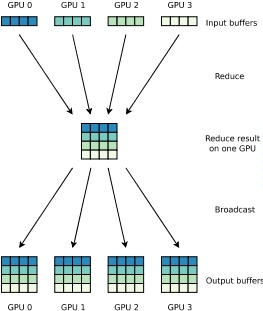 We run a benchmark to show this shortcoming. NCCL is clearly the best when only one Reduce and Broadcast is called (1 Push-Pull). However, in workloads that require many Reduce and Broadcast in a sequence, NCCL becomes slower than the parameter server implementation for small message sizes. 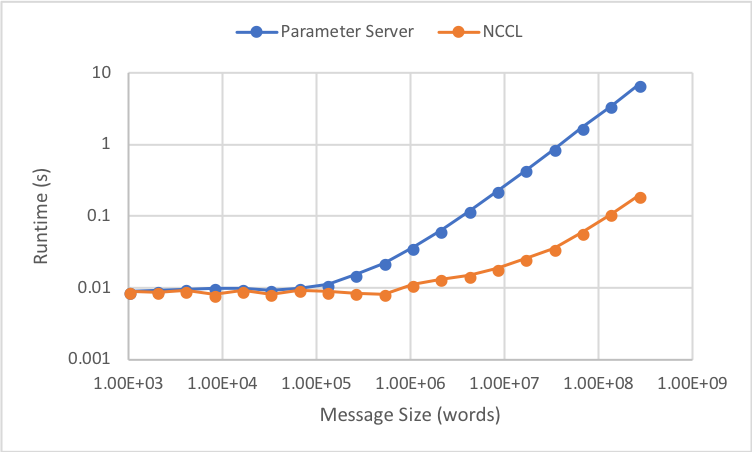 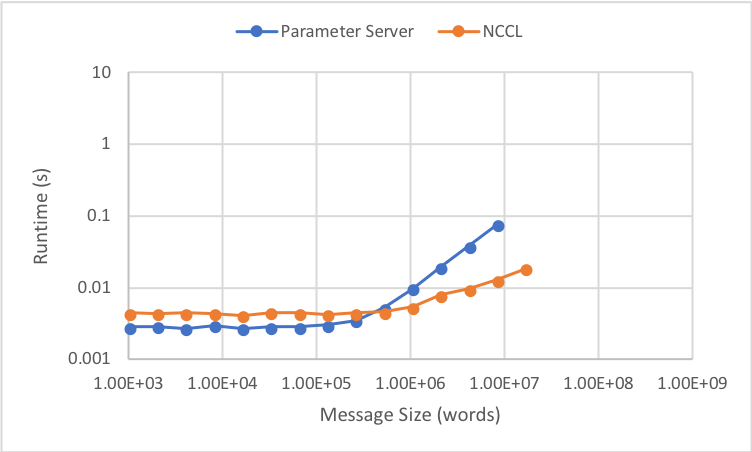 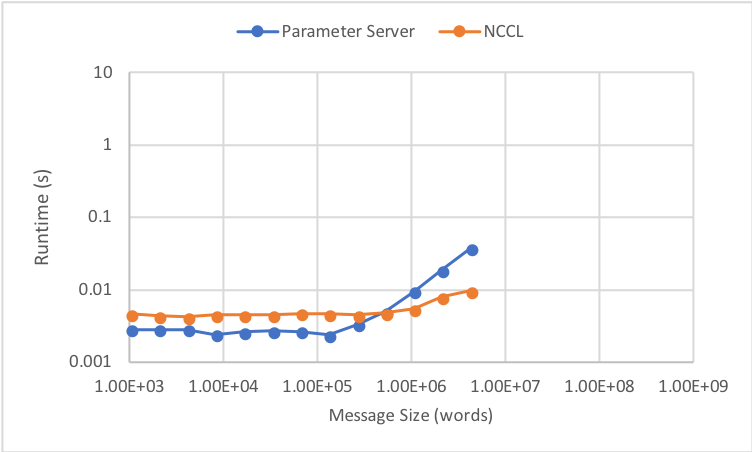 Figure 2 explains the end-to-end performance results (see Figure 8) that show Parameter server is faster for networks that require many Push-Pulls over relatively small keys (e.g. ResNet-50, Inception-48 need over 157 Push-Pulls on keys not exceeding 2M floats in size), but NCCL ring Reduce is faster for networks that only need Push-Pull over few keys (e.g. VGG-16 and AlexNet only need fewer than 32 Push-Pulls on keys that exceed 10M in size).

Our experiments are performed using the p3.16xlarge instance. The link topology of p3.16xlarge is shown in Figure 3. It is composed of 3 types of links: 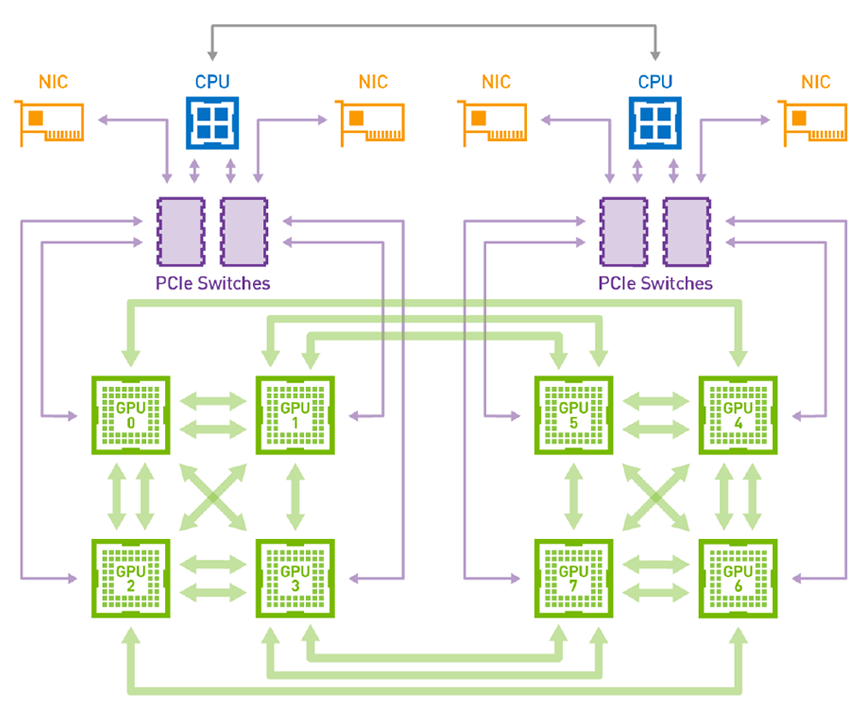 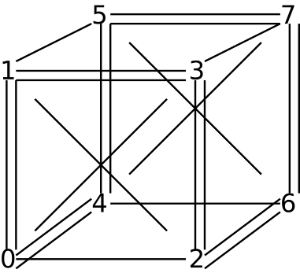 Our approach is based on the idea of using trees to perform the Reduce and Broadcast. We can use the idea of minimum spanning trees to do a binary tree Reduce communication pattern to improve it following this paper by Wang, Li, Edo and Smola [1]. Our strategy will be to use:

Both methods are shown in Figure 4. 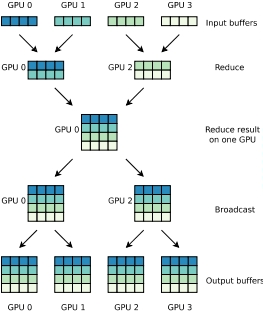 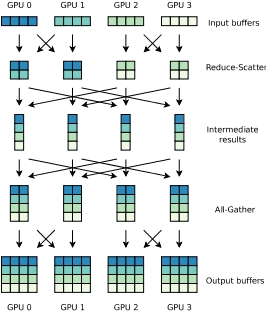 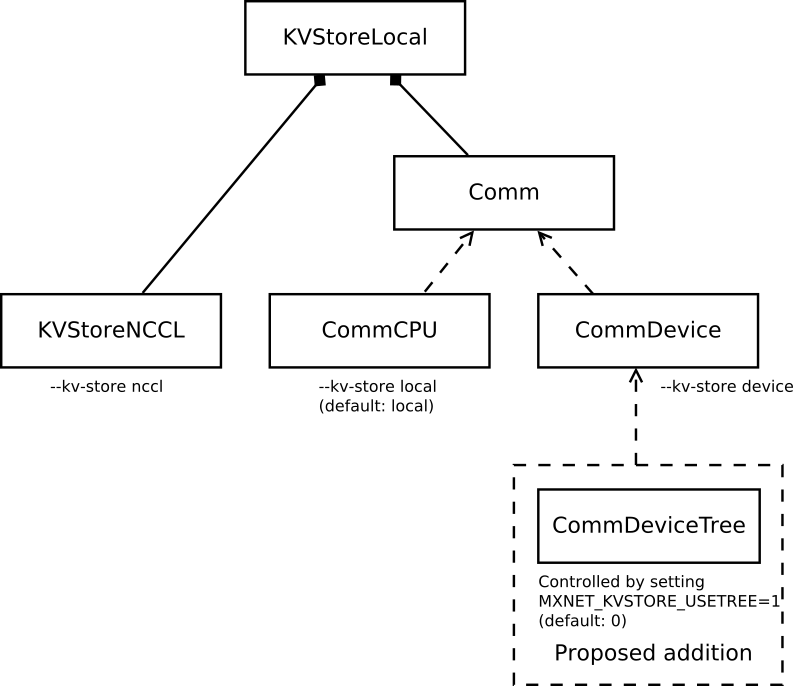 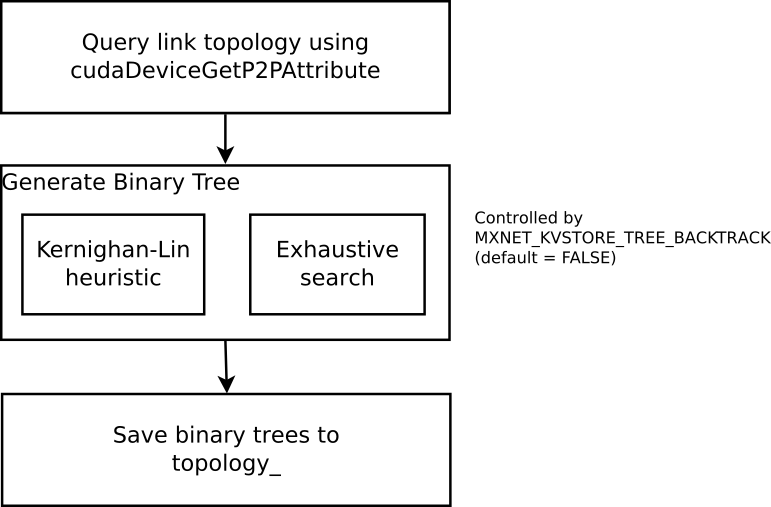 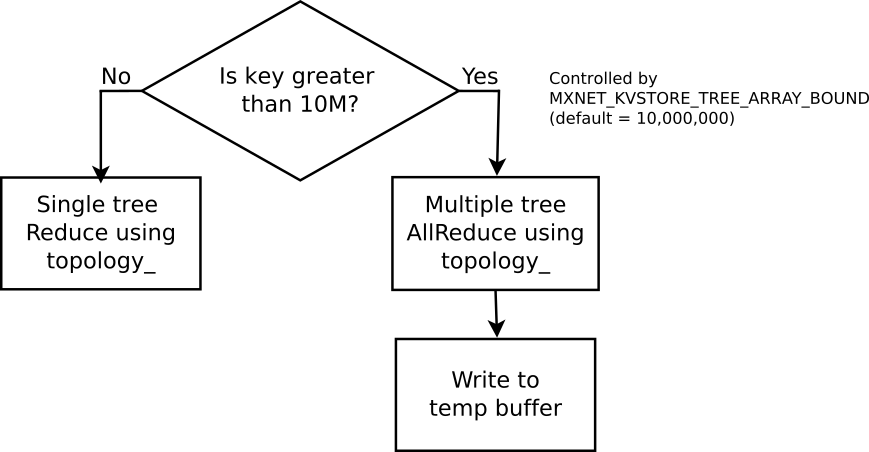 Note: Additional memory copies to temporary buffer (temp) is necessary following Reduce and Broadcast, because we do not know the final destination buffer dst at this time. However due to the interface of kvstore::Push() (i.e. the user-exposed method that calls Reduce), this information is not known until kvstore::Pull() (i.e. until Broadcast). This means that unless the API is changed to PushPull (which has both source and destination arguments), we will need to do extra write to temp buffer in Reduce, and an extra write to temp buffer in Broadcast. The good thing is that these writes are on the same GPU, so they do not take significant amount of time (less than 1% of the runtime). Interestingly, this is the same API change that the other All-Reduce related proposal is asking for.

As shown in Figure 5, the design can be broken into two tasks:

1. Use Binary Tree to do Reduce

First, given a binary tree we show that it gives us the precise sequence of GPU sends in order to perform a reduce. On the left will be the link topology in 3D view. On the right is the portion of the binary tree we are interested in.

(d) On link topology (left), the sequence of sends forms a spanning tree. The operations also correspond to a binary tree (right).

We looked at using two methods to generate the binary tree. Since we are looking for a balanced binary tree instead of a maximum spanning tree, we cannot use polynomial time algorithms such as Kruskal's or Boruvka's MST algorithm. Using the link topology saved in an adjacency matrix as input, we used:

1. Add the vertex we want to be root to the set of root nodes. Begin with entire graph in one cluster.

2. While at least one cluster has at least 2 vertices:

a) Apply Kernighan-Lin heuristic to discover a clustering of the graph into two clusters.

b) Look for the edge that satisfies the following conditions:

If no such edge is found, use exhaustive search to find a binary tree from this root.

3. Save the binary tree found in order to do reduction.

This worked well most of the time. However, when trying to find such a tree for 6 GPUs, we notice that sometimes this gets stuck and an edge cannot be found to link two such clusters. In such cases, we resorted to exhaustive search.

Trees are generated in such a sequential fashion described above. To discourage later trees from using previously used links, we apply a multiplicative penalty term MXNET_KVSTORE_TREE_LINK_USAGE_PENALTY (default = 0.7) whenever a link has been used. This is multiplied to the initial link topology adjacency matrix where 3 represents double NVLink connection and 2 represents single NVLink connection.

When to switch between Single and Multiple tree 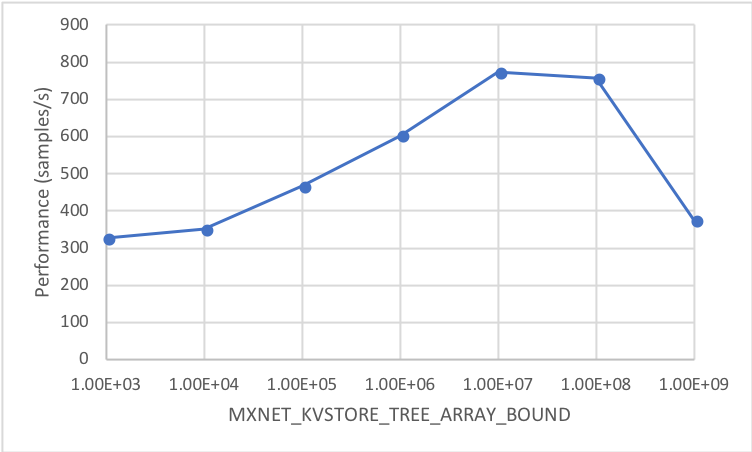 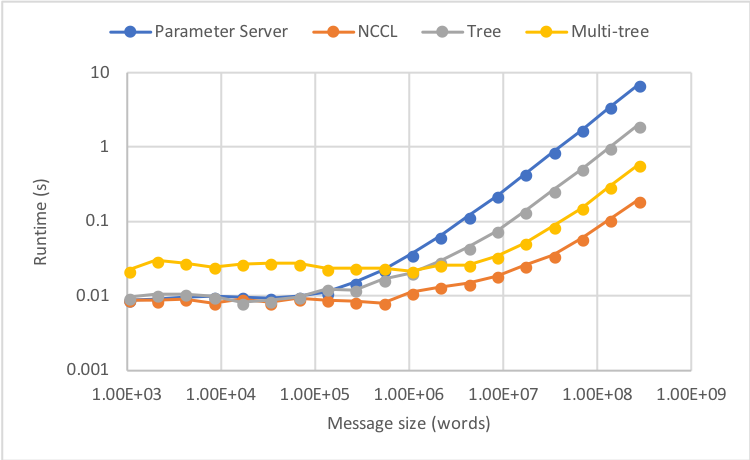 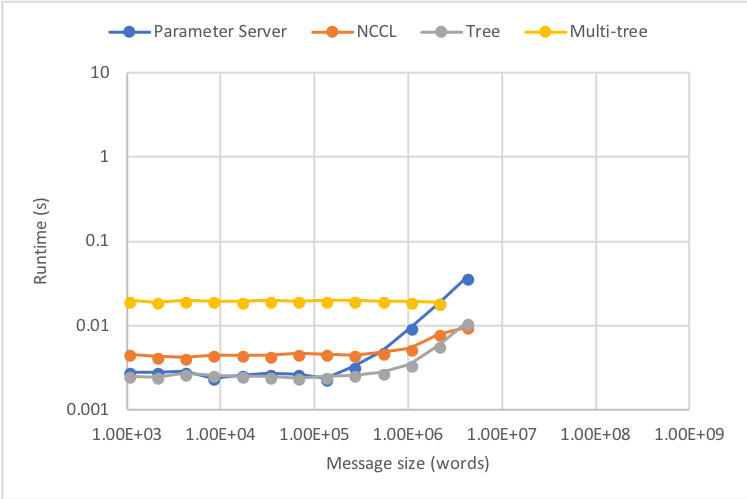 Other communication frameworks such as Horovod [2] built atop Tensorflow and Synkhronos [3] built atop Theano have also noticed the problem described earlier. They try to solve the problem of NCCL not overlapping multiple Reduces well by batching tensors (keys) together. However, this incurs overhead of memory copies within the same GPU.

Instead of this approach, we follow the approach outline above of using the asynchronous MXNet engine to build our own single-machine multi-GPU communication system. This has the advantage of not incurring memory copy overhead, reducing a dependency from MXNet, and potentially getting better performance. 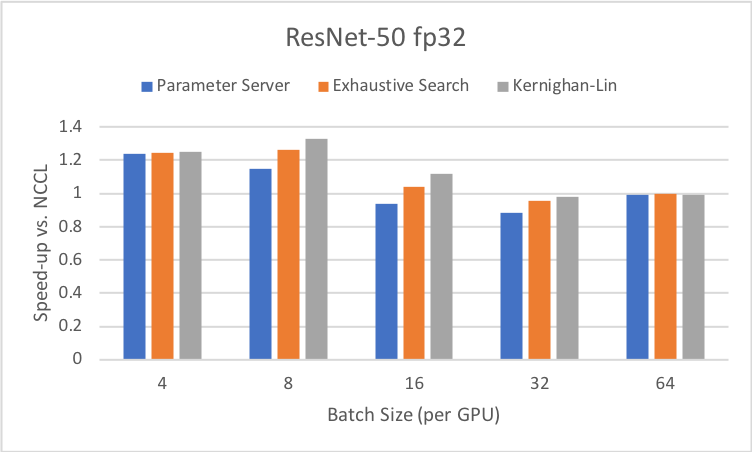 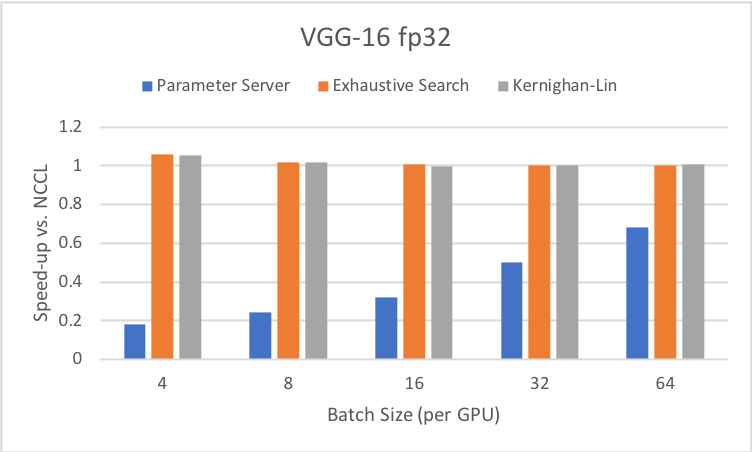 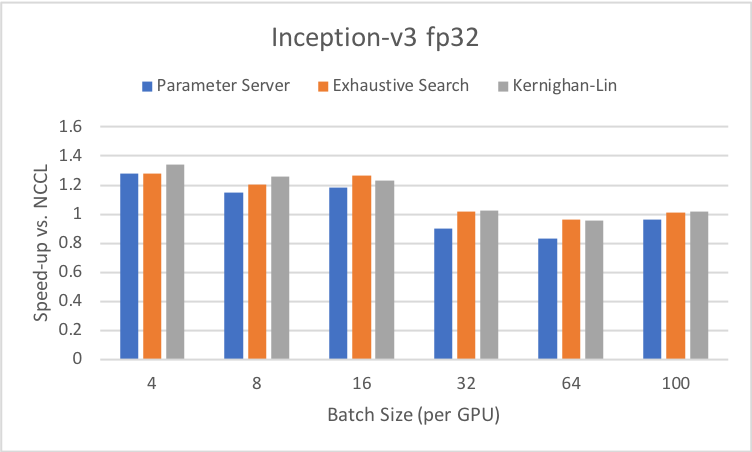 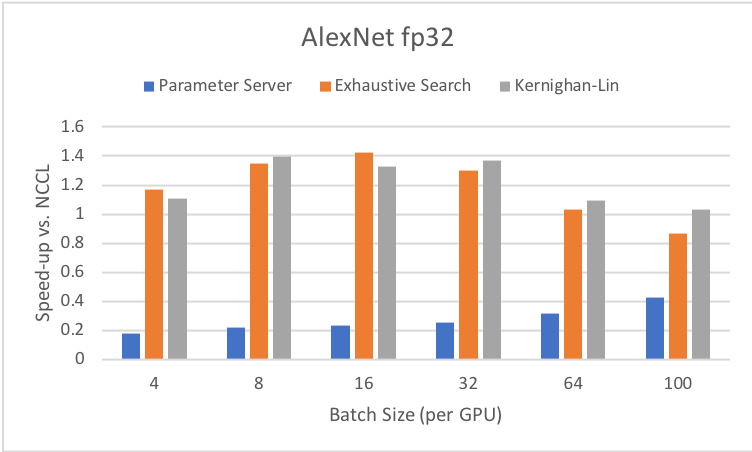 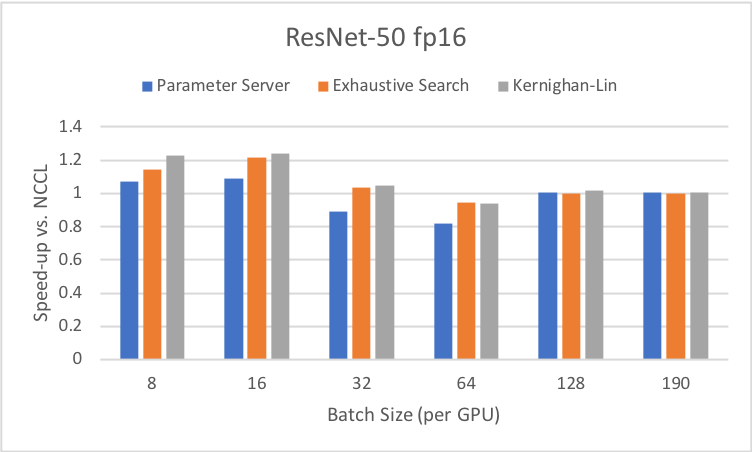 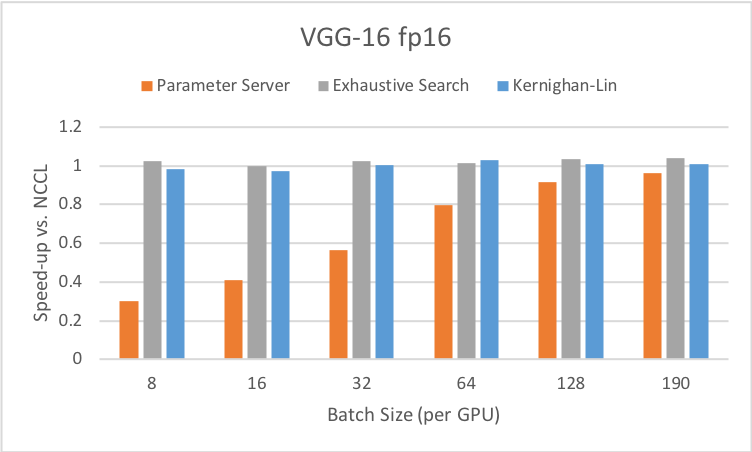 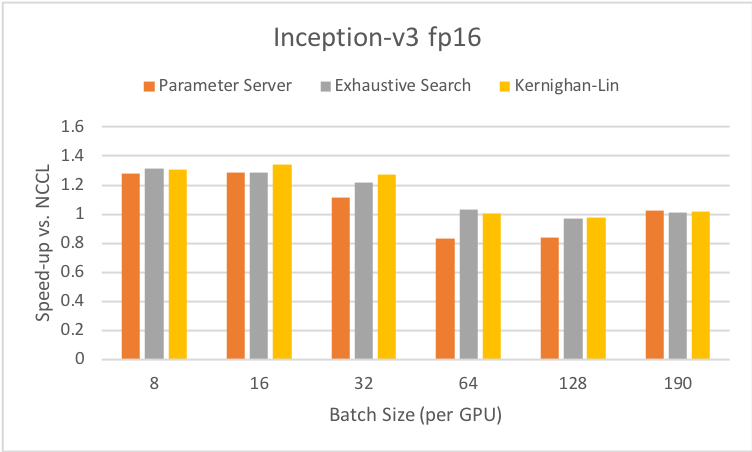 There is another All-Reduce related proposal on this wiki. The problem they are trying to solve differs from ours in two ways:

In light of these two differences, ideally we would be able to combine our efforts by first using single-machine communication (this proposal) to reduce keys within a machine, and use GPU-aware MPI to all-reduce keys between multiple machines (their proposal). Going from MPI for CPU to GPU-aware MPI is not much work, because it only involves choosing an MPI framework that supports (i) GPU-aware communication and (ii) change MPI send and receive buffers from CPU buffer to GPU buffer.