Thia document provides instructions for setting up a development environment for Nutch within the Eclipse IDE. It is intended to provide a comprehensive beginning resource for the configuration, building, crawling and debugging of Nutch master branch in the above context.

N.B. Nutch 2.x branch is no longer in development so all documentation relating to that branch has been removed from this guide. If you are interested in that information then contact the Nutch dev@ team.

Setting up Nutch to run in Eclipse can be tricky, and most of the time you are much faster if you edit Nutch in Eclipse but run the scripts from the command line. However, it's very useful to be able to debug Nutch in Eclipse and is also extremely useful when applying and testing patches/pull requests as it enables you to see them working in a larger context. This being said, you will still benefit greatly by looking at the hadoop.log output. This tutorial covers a fully internal Eclipse/Nutch set up, using only Eclipse tools and associated plugins. 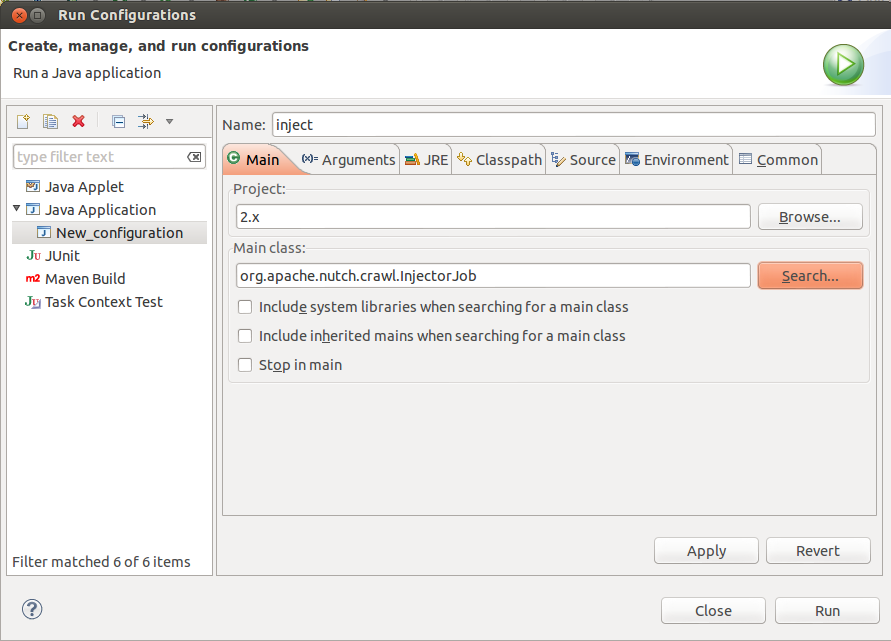 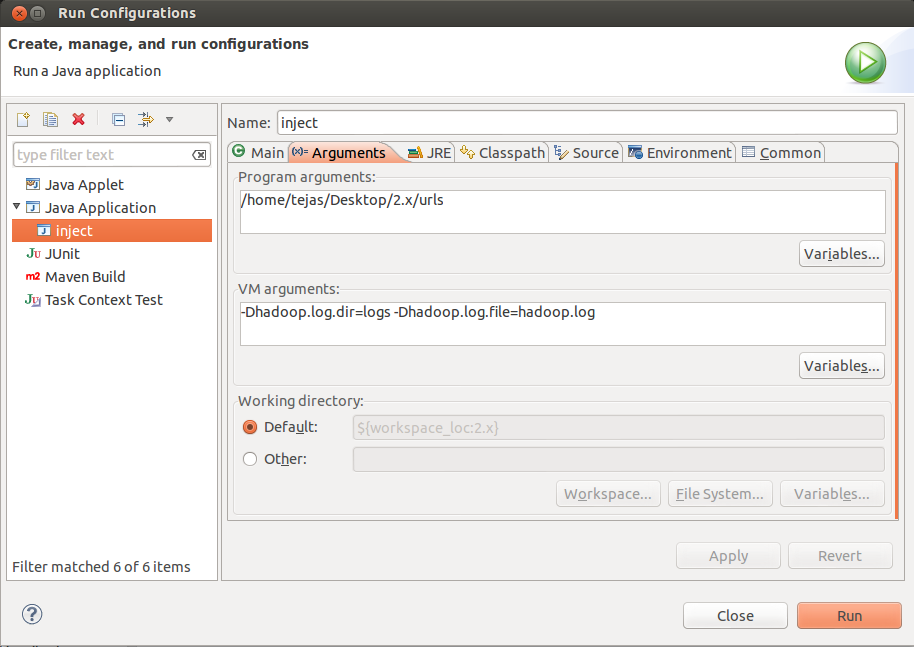 Click "Apply" and then click "Run". If everything was set perfectly, then you should see inject operation progressing on console.

3. the application will be suspended just after launch

Instead of creating an extra launch configuration for every tool you want to debug, one single configuration is enough to debug any tool (parsechecker, indexchecher, URL filter, etc.) and that even remotely (crawler/tool running on server, Eclipse debugger locally).

Debugging takes time, esp. when inspecting variables, stack traces, etc. Usually too much time, so that some timeout will apply and stop the application. Set timeouts in the nutch-site.xml used for debugging to a rather high value (or -1 for unlimited), e.g., when debugging the parser:

Eclipse is able to show Javadocs immediately, not only for Nutch classes but also for dependent libraries. While Eclipse takes the Javadocs of Nutch classes directly from the source files, this is not the case for dependent Ivy managed libraries. There are two ways to tell Eclipse where to find the Javadocs of dependent libs: (1) adding the Javadoc URL to a jar file, or (2) use the IvyDE Eclipse plugin. Note that both ways will modify the file .classpath. Because the ant eclipse target will overwrite the .classpath file, you should make a backup before and merge the changes made via Eclipse back afterwards.

Connect a Library to the Javadoc URL

The simplest way to connect a jar library with its Javadocs is to add the Javadoc URL manually in the classpath editor, see screenshot.

The Nutch build system delegates the managment of library dependencies to Apache Ivy. There is an Eclipse plugin IvyDE to integrate Ivy's dependency managment. It is well-documented, including a description how to add the managed libraries to the Eclipse project. The main Ivy file is ivy/ivy.xml but note that every plugin has its own ivy.xml. If working on a specific plugin, it is a good idea to add also its ivy.xml. It is possible to use IvyDE in addition to the libraries placed by ant eclipse in .classpath.

IvyDE is then able to fetch also javadoc and source packages (if provided) and show them in Eclipse. Again, there is an excellent description, how this can be enabled in the Source/Javadoc Mapping section of the Ivy preferences. Note that the Ivy cache (usually ~/.ivy/cache/) must be cleaned before Ivy Resolve is called from Eclipse.

The Nutch source code must be out of the workspace folder. Alternatively you can download the code with eclipse (svn) under your workspace rather than try to create the project using existing code, eclipse sometimes doesn't let you do it from source code into the workspace.

Make sure you set your plugin.folders property correct, instead of using a relative path you can use a absolute one as well in nutch-default.xml or even better in nutch-site.xml. Ideally all efforts should be made to keep nutch-default.xml completely intact.

No plugins loaded during unit tests in Eclipse

During unit testing, Eclipse ignored conf/nutch-site.xml in favor of src/test/nutch-site.xml, so you might need to add the plugin directory configuration to that file as well.

Sometimes (fairly often) it makes sense to also have the Hadoop classes available during debugging. This should really second nature as Nutch heavily relies upon the underlying Hadoop infrastructure. Therefore you can check out the Hadoop sources into your Eclipse IDE and combine to debug this way. You can: