The effort was renamed to RADiX to help delineate it from the core distribution of OODT. RADiX will be both easy and awesome. By default it is already RAD.

Info from the ApacheCon NA 2011 talk by Paul Ramirez and Cameron Goodale is here: http://lanyrd.com/2011/apachecon-north-america/smfcf/

The high level goal of this effort is to build a distribution of OODT that sets up, installs, and runs within a few commands. Reducing the number of commands to run OODT is an effort to push the edge of ease of setup and configuration required to get going. This distribution of OODT will include both a deployment and source structure for managing the evolution of your installation of OODT.

Maven offers an improved way to export, configure and build OODT called Archetypes. Archetypes simply put are a way to define templates for projects. Within these project templates we will include packaging instructions to conform to the guidelines below to increase the similarity amongst deployments of OODT. Moreover, we will build higher level scripts and configuration to tie the pieces together at the system level. Finally, we will leverage the CAS Install Maven Plugin to take us from our source structure to our deployment structure.

This wiki will be used to capture thoughts, ideas and plans for the first archetypes we develop for OODT. To keep things simple we are going to initially focus on a small number of modules that are typically deployed and configured together. Finally, our goal is to build an 80% solution that works in most cases to get people out of the gates and running with a full OODT solution. We believe this effort will help increase adoption and conformity amongst installations of an already great system.

Long, long, ago there was a thought that making some archetypes for OODT would be great to get people going. Of course we already had example projects along with each of our components but let's be honest, how many of us started from those? Okay, so a few did but that's not the point. Sometime later a wise man pondered that it might be cool to borrow the idea Cloudera like distribution for OODT. That of course fizzled, until sometime recently a young padawan came along and said OODT should just be easier. The archetype guy said, you are right and that's what I've been saying. Of course, being that the idea was always in the aether and not a reality no one knew. That is until now. RADiX is the realization of what has been brewing and itch that has been waiting to be scratched. It builds on stuff we have done all along but brings our work to the forefront and helps it shine. This new way of working with OODT will not be for everyone but we hope that it will give the 80% solution and that,"Then you'll see, that it is not the spoon that bends, it is only yourself."

The archetype is available at maven central. Here is the set of commands you would typically run.

You should then edit the radix file replacing the parameters below with whatever you want.

NOTE1: If you observe for some reason OODT doesn't start, make sure JAVA_HOME is set in your ~/.bashrc  (Example: export JAVA_HOME="/usr/lib/jvm/java-6-openjdk-i386") and then start OODT in a new terminal. The actual problem can be seen in the tomcat logs which is located in $OODT_HOME/tomcat/logs.

NOTE2: After you launch oodt (the fourth command), you may observe the following output:

Don't be confused. In order to see whether the oodt is running, open a browser to http://localhost:8080/opsui.  Click on PCS Status link to get detailed information about running processes. A green arrow indicates that the corresponding process runs correctly. 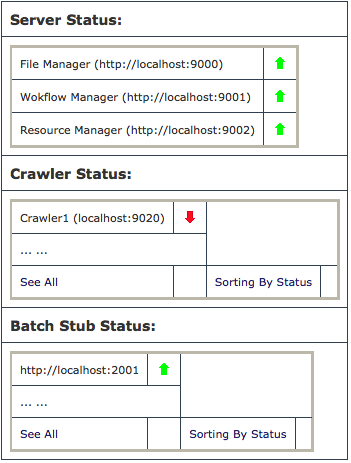 Alternatively one may run the following command and get list of relevant processes and assigned ports.

The "oodt start" command should return quite quickly. This is normal. If, however, the http://localhost:8080/opsui link above is not functional on your system, one good place to start looking for probable cause is the "oodt.out" log file, which can be found (if you've been following the example above) in "oodt/logs/oodt.out"

If you want to manage your OODT RADiX distribution with Subversion.

If you want to manage your OODT RADiX distribution with Git

In order for the easy installation to work properly we will need to settle on a default deployment layout structure. Below is our plan of how we want to layout the deployment when the project is built. First we will list out an overview, then we can detail each path and what files are going to be saved into each.

This directory contains scripts manipulate the underlying components. You can start, stop, and restart each individual component or all 3 at the same time.

These are the default parameters set within oodt.properties.

Component settings we plan to default

Once the above is complete our thoughts are that the next items to be incorporated are as follows:

Requirements to getting Artifacts Synched with Maven Central: