Please review these Release Notes to learn what is new in this version as well as important remarks concerning known issues and their workarounds.

Along with the new features described later in these Release Notes, our Bugzilla issue tracking database provides a detailed list of resolved issues.

Other general areas of improvement include: Improvements to interoperability, feature enhancements, bug fixes and new and updated translations.

Note: Mac users should be aware that with this release Apache OpenOffice is a 64-bit application and requires Mac OSX 10.7 or above.

In Writer comments/annotations are now possible on text ranges instead of only at text positions.

This feature was introduced in the Open Document Format (ODF) in version 1.2 and improves, among other things, the interoperability with the OOXML file format, but until now had not been implemented in OpenOffice. The OSBA OOXML improvement project included the implementation of this feature.   This feature is an improved version of the code written by SUSE for this OSBA project, where the patches made available to us under the Apache License 2.0.

Details on the feature:

In Writer the user experience for editing Input Fields has been improved.

When the cursor is inside an Input Field the user can navigate to the next or the previous Input Field using the TAB-key respectively the SHIFT-TAB-Key - similar to the navigation from one cell to another cell inside a table. To insert a TAB-character into an Input Field CTRL-TAB-key has to be used.

Input Fields can only contain text without formatting. Accordingly, the corresponding edit and insert actions for Input Fields are restricted and character formattings are applied to the complete Input Field. This means no change compared to former OpenOffice versions.

The Interactive Crop feature for selected Graphic Objects in Draw/Impress allows intuitive cropping of Graphic Object content. However, it previously only worked flawlessly when the object was not transformed, except being translated and scaled. For AOO 4.0 a preview of the crop was already added.  For AOO 4.1 the interactive cropping will now work in combination with all possible Graphic Object transformations.  If your Graphic Object is rotated, sheared, mirrored in X and/or Y, it can now be interactively cropped flawlessly. Also the cropped result will be correct now in all combinations of transformations and all possible graphic contents (pixel graphics, metafiles, SVG, ...) in all exports (Print, PDF Export, ...).

The example shows a rotated and sheared Graphic Object that gets interactively cropped to show only a part of the world map.

Import Picture from File and Drag & Drop of Graphic Data

The following actions work the same in all AOO 4.1 Applications:

For using the Import Picture from File Dialog:

This was an enhancement request to make re-usage of existing Graphic Objects easier - the problem was that the user had to insert a new Graphic Object, note the Position and Size of the old one and apply this to the new one to cleanly replace the old Graphic Object. Thanks for requesting that enhancement in AOO Bugzilla!

There was a performance problem when Documents with big 3D charts were Loaded (own Formats) or Imported (external Formats). That issue was located in the creation of a huge amount of 3D Objects for Chart visualization. This has been improved. For example; an example document (External with a huge Chart containing 100x100x5 vertical 3D Data Boxes) could not be imported at all. It can now be loaded in seconds and looks like this: 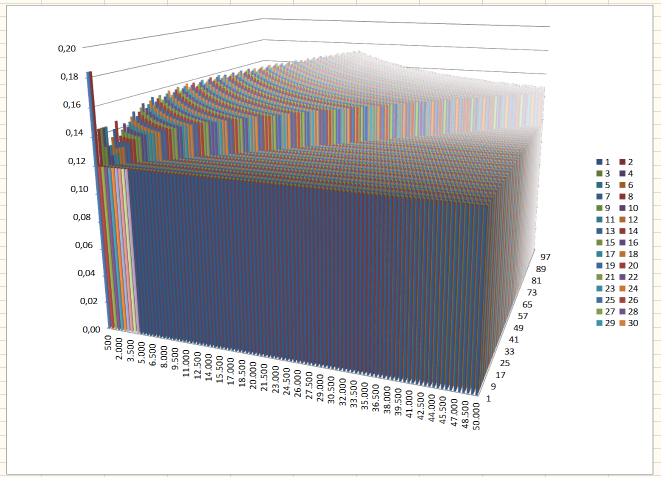 This improvement allows to work with much bigger 3D Charts in AOO 4.1.

When applying Modifications and/or Filters to Graphic Objects the change was often applied by internally changing the Vector Graphic (SVG or Metafile) to a Pixel-Based variant. This makes the advantages of Vector Graphics vanish and often results in bad output quality for Print and PDF export. Also the handling of Graphic Objects varied between Writer and other AOO Applications in this aspect. This has been internally unified so that all usages of Vector Data in Graphic Objects are equally improved for this aspect and in the future.

This also works for all combinations of the above modifications. This enhancement is already visible in the Edit Views, but its main goal is to increase Print and PDF export quality (and other exports that can keep Vector Data) when working with Vector Graphic content accordingly. Here is an example from the Edit Views (Left: AOO 4.0.1, Right: AOO 4.1). It's the same SVG graphic modified to Grayscale:

Previous versions of AOO eventually modified the type of inserted Graphic Data, for example inserted JPEG files were in some scenarios saved as PNG in the created ODF files. These scenarios were different for the different AOO Applications since it was not handled the same internally. This has been improved so that AOO 4.1 handles this equal in all Applications and tries to always keep your inserted original Graphic Data when possible. This gives advantages for the file size of the created ODF Files, but also for the Image quality. There were scenarios in which JPEG files were recoded to JPEG which will in no case improve the image quality but has the potential to lower it.

This works for BMP, JPEG, PNG and GIF for pixel-oriented graphics. It is also in place for Vector-based Graphics like SVG and Metafiles.

The Clipboard support for exchange of PNG is further improved, so that Pixel-based Graphic modification cycles (e.g. copying graphic content to an external Application, modifying it and copying it back to AOO 4.1) will work better with more external Image Editors of your choice. Broader support for PNG means that transparency in Pixel-based graphics will be preserved in more places. Did you know that you can copy any Graphic Object from AOO 4.1 to the clipboard and paste it to any external Image editor of your choice to modify them and copy them back?

Outdated code from Mozilla that was used to include cryptography services and address book access has been replaced with the more modern and more secure NSS libraries. This greatly simplifies the build process and source code maintenance and is transparent to end users in general. Addendum (2015-09-30): Please see information on Certificate Detection so that using digital signatures works correctly for you.

End users are affected only in the following ways:

For a complete list of available languages and language packs see:

Note: The extension contains multiple variants. Only the en-GB dictionary has been updated.