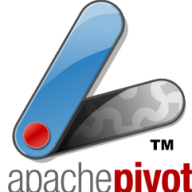 After initially considering a number of different technologies to use for a new cross-platform application, we decided to use Pivot both because of its wide variety of controls and ability to be seamlessly deployed as either a desktop application and a web applet.
But since then, we have been impressed with the overall design of the framework, the ability (being an Apache open-source project) to add features, fix bugs and get improvements made, and with the responsiveness of the developers to answer questions and work through problems. So now we are just about to do our first commercial release of this product.

We chose Pivot due to how rapidly we were able to create a user interface and tie it into our existing API for our storage system.
Pivot's straight-forward collection model saved us the hassle of writing mountains of boilerplate code to update the UI whenever low-level application state changed.

I AM IMPRESSED. Web services, data binding, event handling, scripting in the UI definition (in any JVM language)...and yes, a good-looking mechanism for static localization. Keep going Apache Pivot - you are heading in the right direction!

From the perspective of someone who is fairly new to Pivot and writing a decent-sized standalone app with it, I can say that Pivot's API is about 10,000 times cleaner than the other choices available for Java... If you need to give a Java app a nice UI with little fuss, I recommend Pivot wholeheartedly.