Deny-conditions and excludes in Ranger policies

Apache Ranger provides centralized security for Enterprise Hadoop ecosystem, including fine-grained access control and centralized auditing. Current version of Apache Ranger, 0.5, supports authorization policies that can allow access to resources when the specified conditions are met – conditions like user/groups, access-type and custom conditions. However, the model does not support policies that can explicitly deny access to resources. Also, the model does not support policies that can allow (or deny) access to a wider group (like employees, everyone) but exclude specific users/groups who might be part of the wider group.

Apache Ranger policy model has been enhanced, for Apache JIRA RANGER-606, with capability to explicitly deny access and specify excludes to both allow and deny conditions. This document covers various details of these enhancements, along with few examples.

While the first part above remains unchanged with this enhancement, the policy model has been updated to support 4 categories of conditions (second part above), as listed below:

Please refer to ‘Policy Evaluation’ section below for details on use of these conditions to determine the access for an authorization request.

Apache Ranger policy model in releases 0.5 and earlier, supports policies that can explicitly allow access to resources. Following screenshots will help understand the details of couple of policies in Apache Ranger 0.5 version: 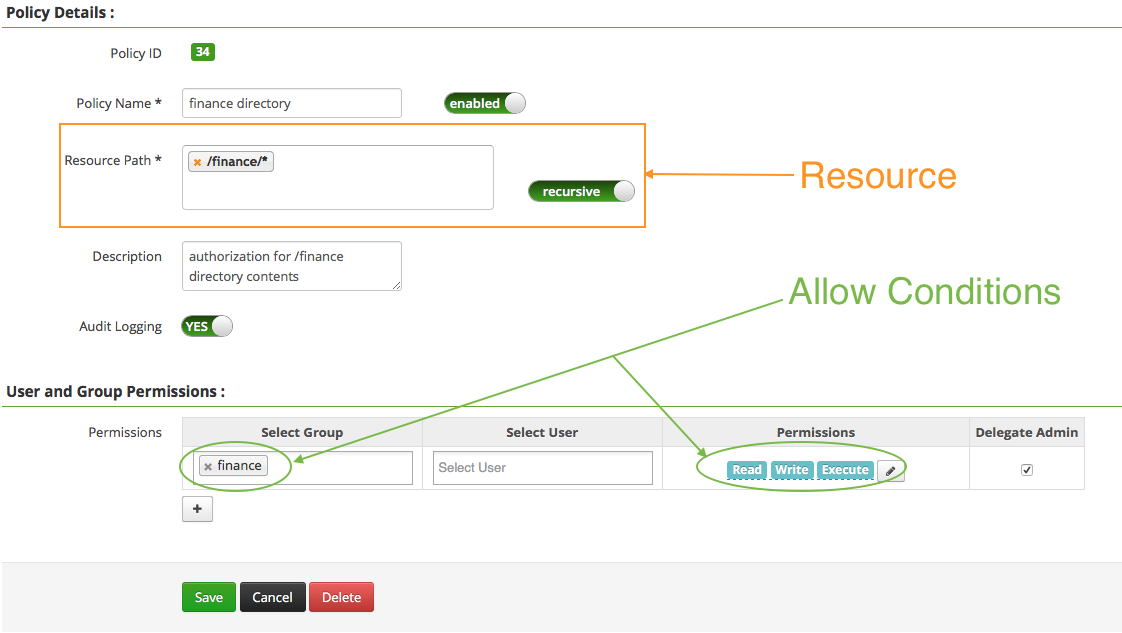 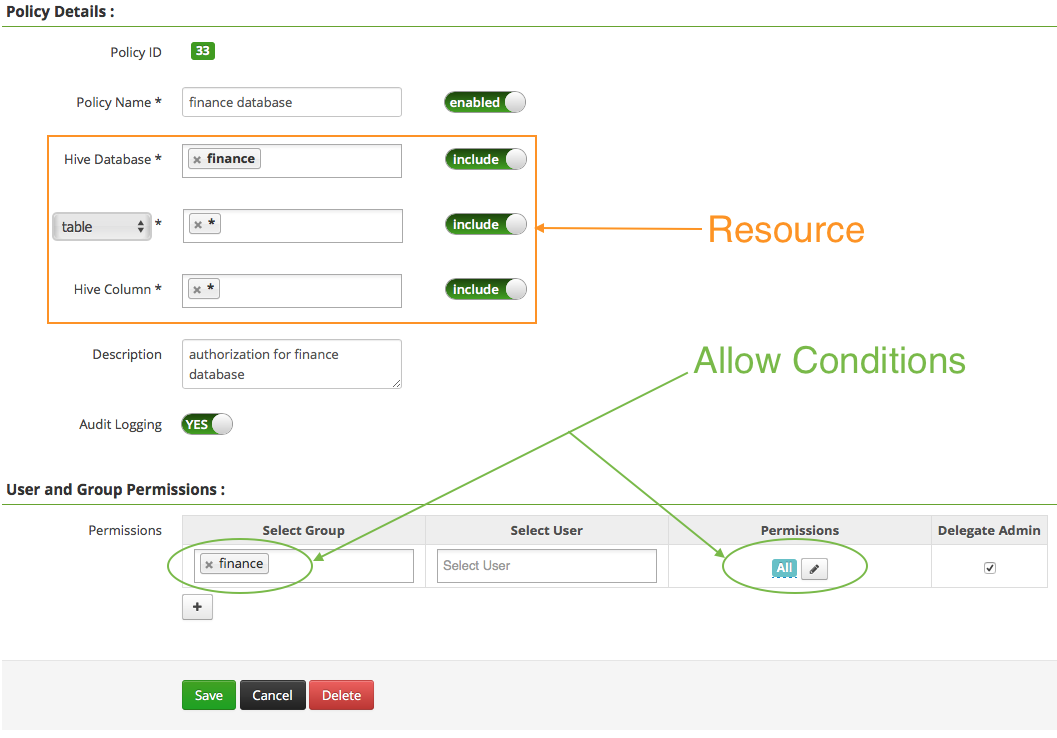 Please note that after updates in RANGER-876, deny in policies is available only for services whose service-def has option enableDenyAndExceptionsInPolicies set to true, as shown below:

Please refer to this wiki for details of REST APIs to update service-def. 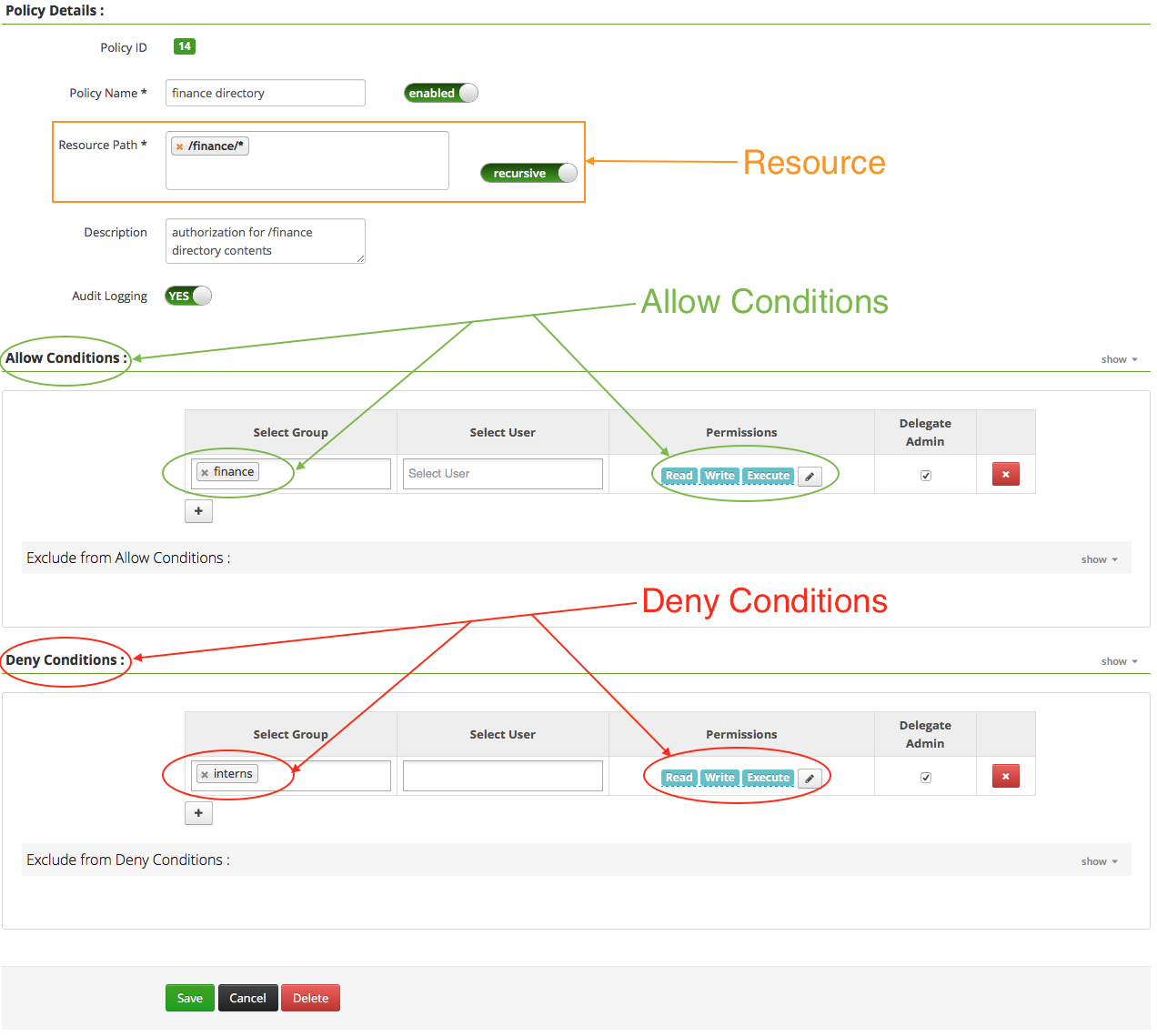 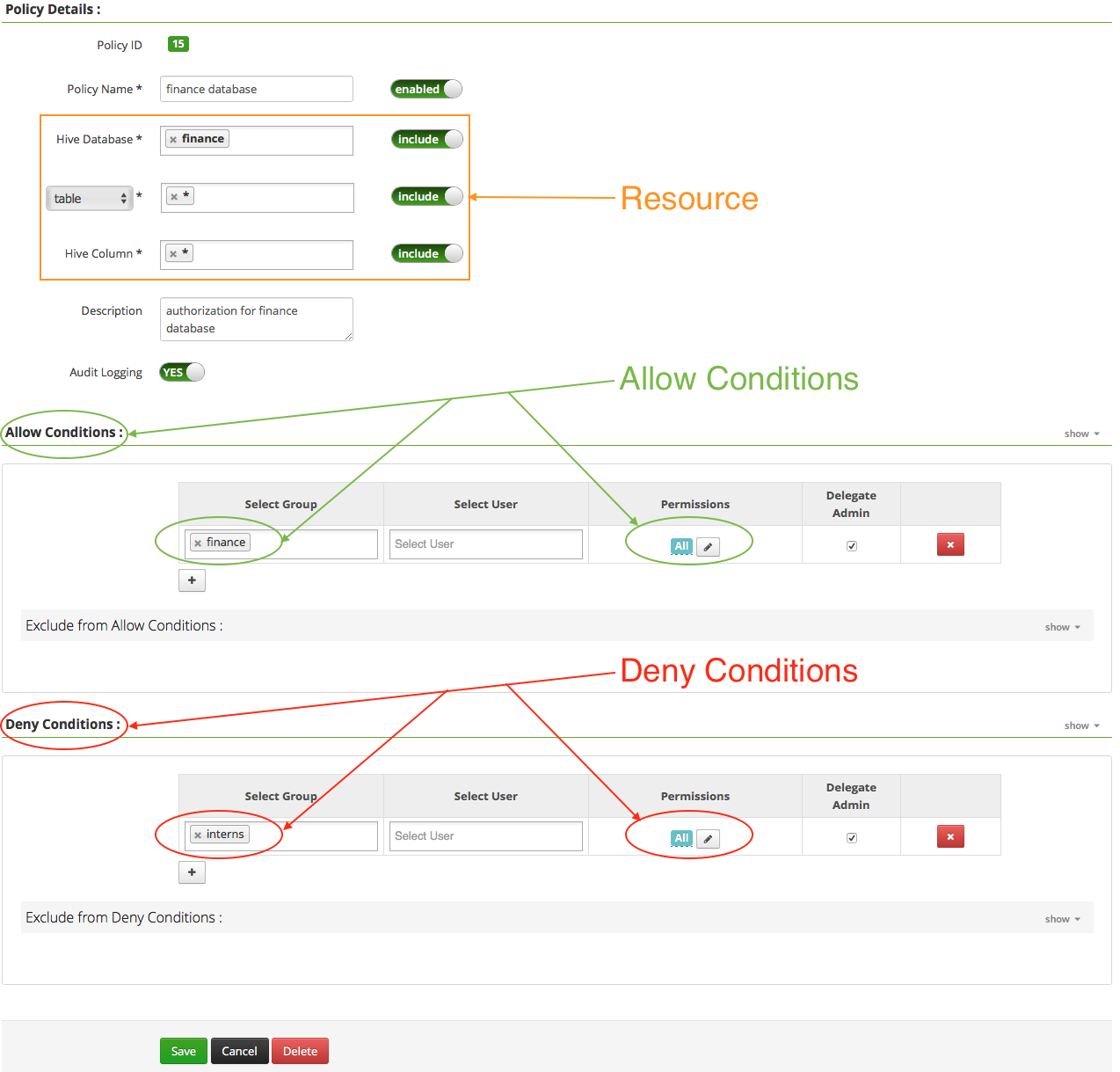 Let’s say one of the users, scott who is in interns and finance groups, works on an assignment that requires select access to finance database. To enable this access, the authorization policy for the database should be updated by adding a deny-exclude, as shown below: 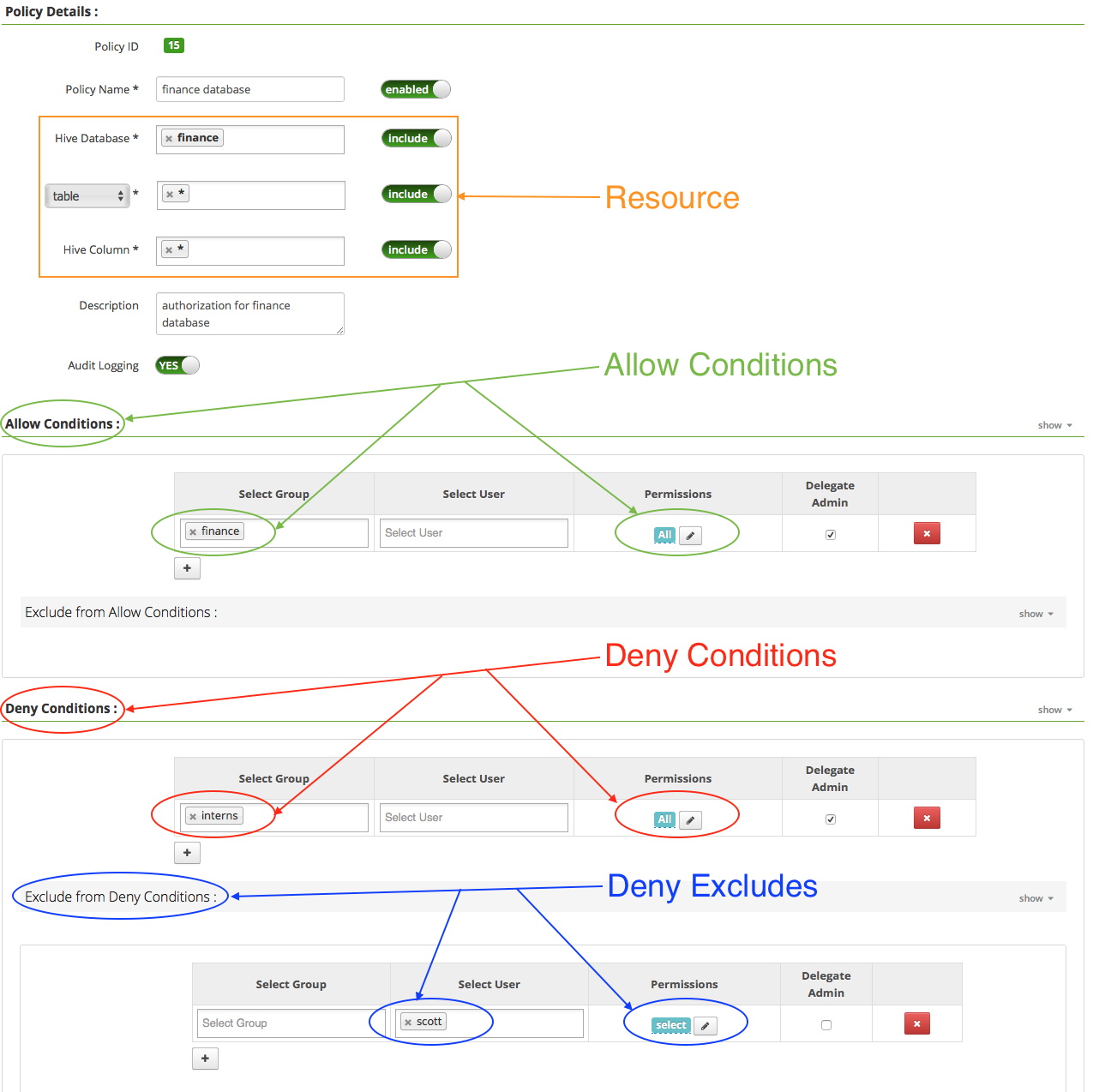 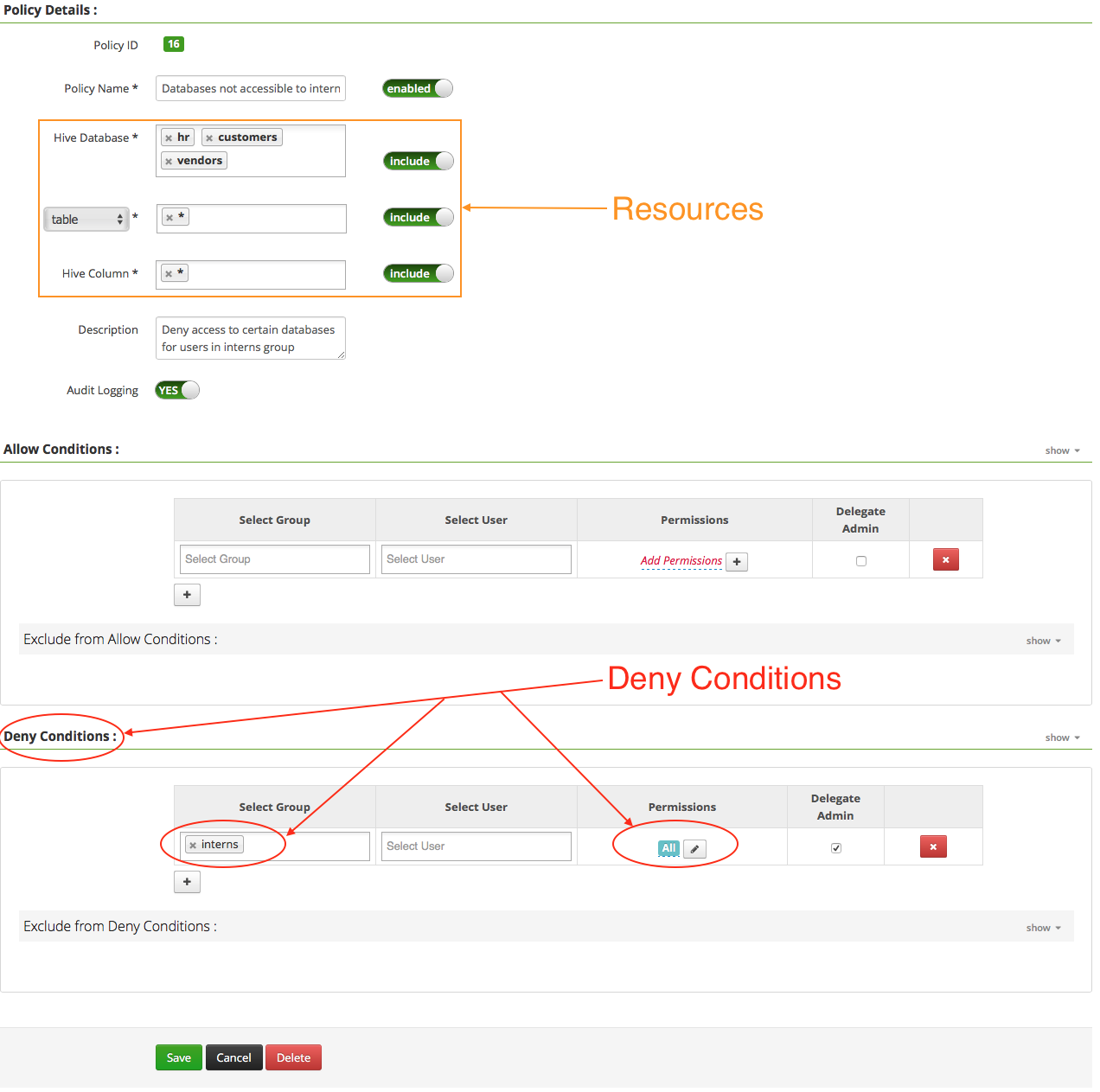 When the policy model supported only allow conditions, the order of policy evaluation did not impact the final result. Apache Ranger policy engine evaluated all policies for the resource until one of the policies allowed the access. When there is no policy to allow the access, the authorization request will typically be denied.

The introduction of deny conditions in the policy model requires the policies to be evaluated in a specific order to ensure that the final result is predictable. The following diagram captures the policy evaluation flow: 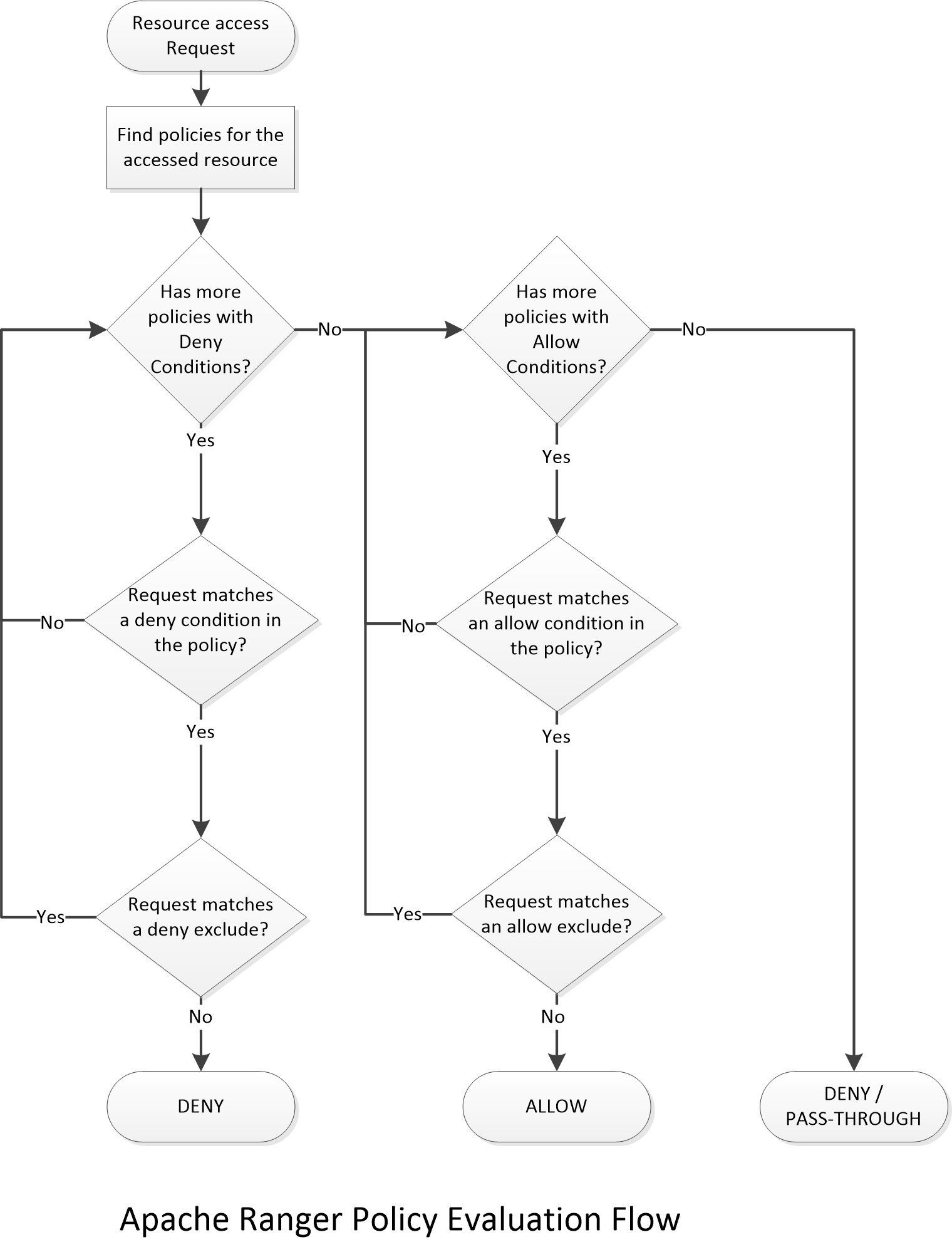 Following is the text version of the above diagram:

Apache Ranger policy model enhancement to support deny-conditions and allow/deny excludes is available in Apache branch named tag-policy (https://github.com/apache/incubator-ranger/tree/tag-policy). Instructions to build Apache Ranger from this branch from a Unix/Linux shell are given below. Please remember to set JAVA_HOME environment variable to appropriate value before executing these commands:

Once the build completes, archive files containing the binaries should be available under target directory, as shown below:

To upgrade an existing Apache Ranger 0.5 version deployment, please do the following: