To provide a common interface for external tools and services to rewind and fast-forward the starting offsets of any input stream of a samza application. This feature will provide the capabilities to manually manipulate the starting offsets by various position types and not only by specific offsets. Many of the current underlying system consumers support different position types for seeking to an offset on an input stream, such as seeks by timestamp, and are not generically exposed by the current framework.

If a container of a samza application fails, upon restart it should resume processing events where the failed container had left off. In order to enable this, a samza container periodically checkpoints the current offset for each partition of an input stream. In case of application failures, samza users would want their application to consume from a particular position of a input stream(for instance, either due to a bug in their application or due to a bug in upstream producer of the pipeline). The workflow currently supported in samza to update checkpoints:

Using the samza-checkpoint tool is tedious and error prone, as it requires proper security access and potentially editing many offsets in a configuration file. In some cases, it can cause a samza container to lose its checkpoints. In addition to the dangerous nature of modifying checkpoints directly, the checkpoint offsets are arbitrary strings with system-specific formats. This requires a different checkpoint tool for each system type (i.e. Kafka, Eventhub, Kinesis, etc...).

SSP - System stream partition. For example, on a Kafka stream called SomeEvent in the tracking cluster, the system is tracking, the stream is SomeEvent and the partition is a partition ID in the stream.

Different systems in Samza have different formats for checkpoint offsets and lack any contract that describes the offset format. To maintain backwards compatibility and to have better operability for setting starting offsets, this solution introduces the concept of Startpoints and utilizes the abstract metadata storage layer.

A requested Startpoint will be stored in the metadata store. This will be decoupled from the checkpointed offsets in the checkpoint stream.

As with Checkpoints, Startpoints are applied to the starting offset of an SSP in a task instance during the start up time of the SamzaContainer. 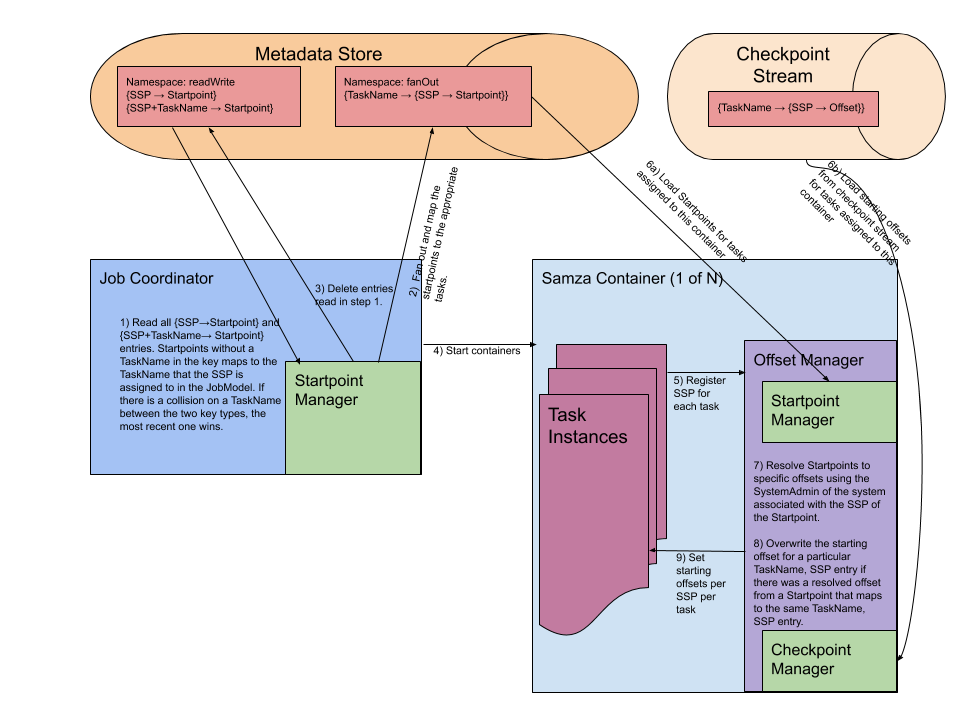 Once a particular Startpoint is applied to the starting offset of a SSP in a task instance, it is subsequently removed at the next offset commit. 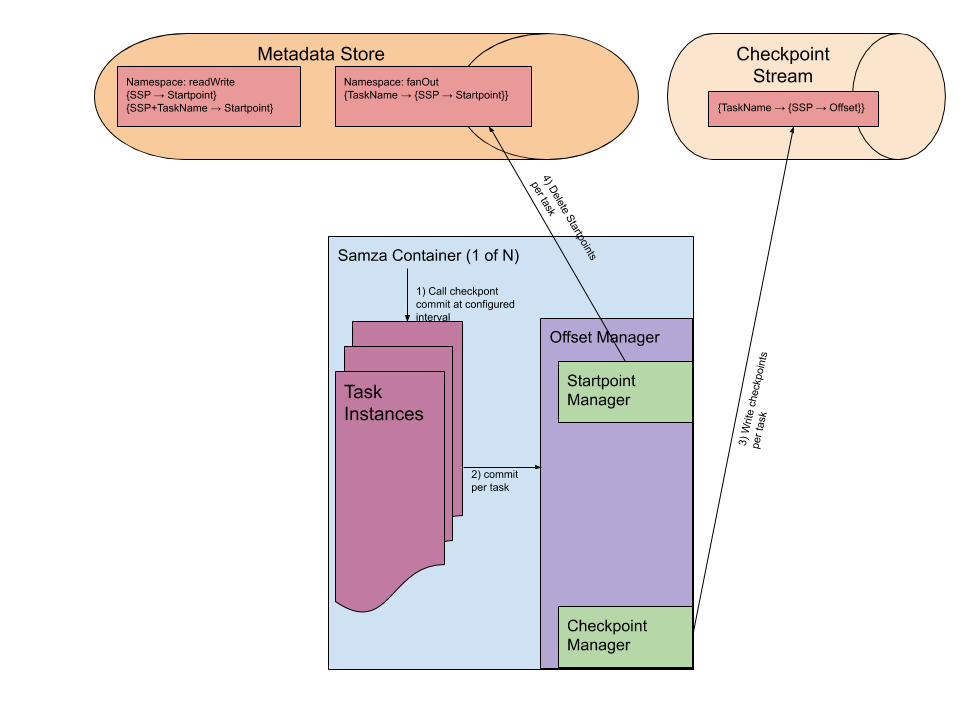 Referenced in the General Workflow above.

Abstractly from the perspective of Startpoint operation, we think of the metadata store as a KV store and mapped as such:

TaskName is optional and is primarily for broadcast inputs where the same SSP spans across multiple tasks.

Upon the fan out, the Startpoints are mapped by task with the same structure as checkpoints:

SamzaContainer is restarted before the first offset commit

Referred to in Step 7 of the Loading Startpoints Upon Job Startup section above.

All changes are backwards compatible. This is an add on feature and no changes to the existing checkpoint operations are required.

There may be opportunities where offset related APIs that are strongly coupled to Checkpoints may be modified to handle both Startpoints and Checkpoints. Any such APIs will be deprecated until the next major version.

No migration needed for this new feature.

Create a test job that logs the offset of the first event consumed per task and per SSP. Test using all Startpoint types.

Use the test job to test all combinations of:

A key part of the core Startpoint feature is for individual task instances to fetch the appropriate Startpoint keyed by SSP-only. The two approaches, fan-out and intent-ACK, have been explored with the analysis detailed in the following subsections. The fan-out strategy is favored over the intent-ACK strategy. See analysis and explanation below.

See General Workflow above for details

This approach is rejected due to the weight of the cons and the complexity required to manage the intents and ACKs once they are applied to the starting offsets and no longer needed. 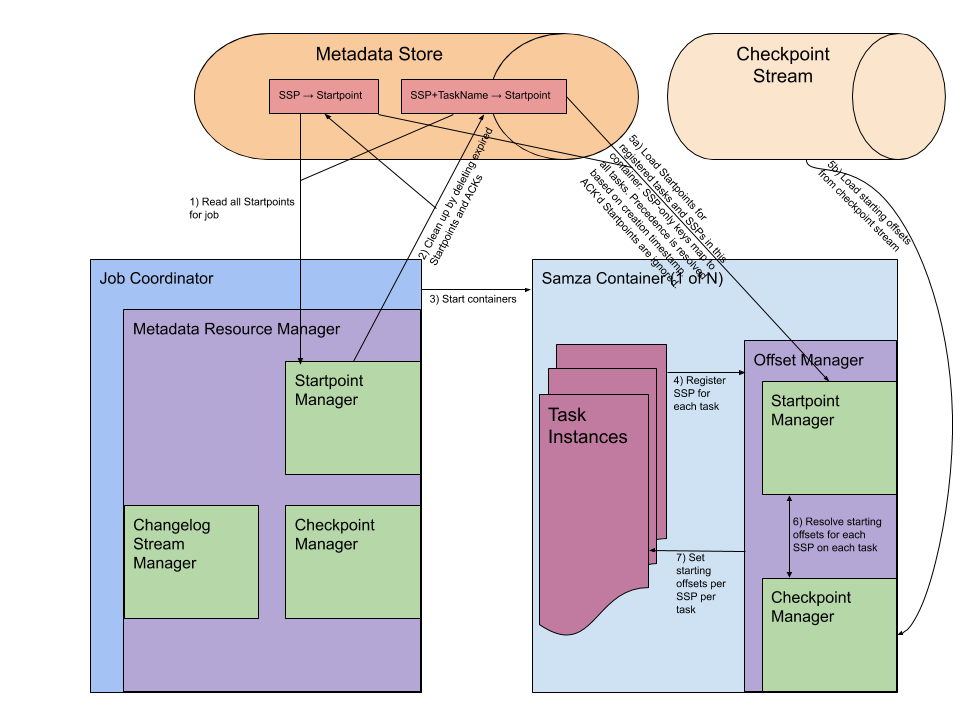 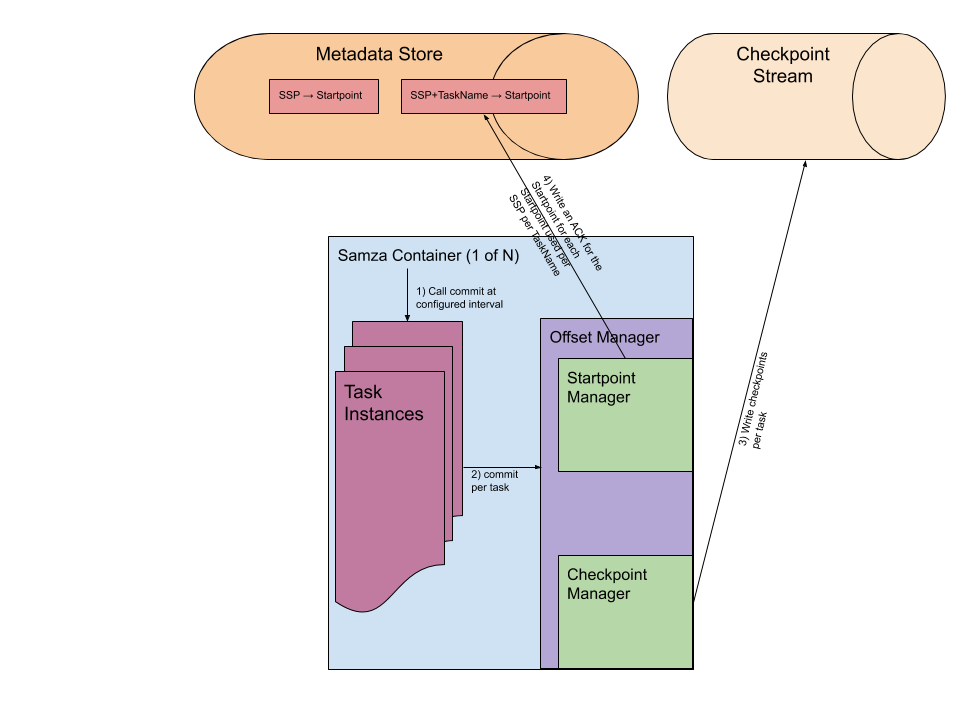 Following is the workflow for the Intent/ACK approach:

The container can acknowledge the startpoint at either one of the following two levels of granularity:

1. Container-level: Currently, compared to YARN with static container count(defined by job.container.count), the number of containers in standalone is dynamic. Processors can join and leave the group at any point in time. For standalone, an external agent cannot determine if it had received sufficient number of ACK's with certainty since number of containers is a moving number.

Unless we change the coordination protocol in standalone to accommodate start-point, I'm not sure if we can ACK at this level to purge startpoints.

There has been interesting recent developments, where we're planning to develop auto-scaling solution for YARN. In the immediate future, the number of containers in YARN will be not fixed and the above scenario described for standalone will apply for YARN as well.

2. Task-level: The number of tasks can change dynamically at run-time either due to increase in partition count of any of the input topics of the job or a new topic has matched the user-defined input topic-regex of the job. The above scenario described for standalone is still applicable here.

Previous explored solutions involved modifying the checkpoint offsets directly. Operationally, the Startpoint solution provides more safety because checkpoints are used for fault-tolerance. To prevent human error, the framework should not allow an external source to manipulate the checkpointed offsets. The ability to set starting offsets out-of-band as Startpoints is designed to do, provides the additional safety layer.

Another pain point for manipulating checkpoints is that it requires the Samza job to be stopped. Startpoints can be written while the job is running.

See Analysis section for details on why the fan-out model is favored.