Recovery time for jobs with large state increases significantly in host-failure scenarios.
This is problematic because of two reasons: a) causes unavailability -- incase of jobs that use Samza for network-monitoring, this implies periods of vulnerability,
and
b) causes backlog buildup in case of jobs with high input QPS, requiring scaleup (then scale-down) or causes increased catch-up time

JIRA-2018 has brought state-restore improvements to Samza, cutting time to restore state from kafka change log by 50-65%.
See JIRA-2018 for details.
However, even with this change state-restore times for stateful jobs is relatively high (e.g., 20 minutes for a 50 GB store).
The motivation for this SEP is to create and leverage backup containers in Samza to create hot replicas of active-containers' state.

This will have two benefits:
a. Reduction in restore time for stateful job.
b. Restore time will become independent of the state-size of the application.

2. Allocation of active and standby containers in Samza-YARN,

3. Implementing orchestration for failover for Samza-YARN,

4. Implementing allocation and orchestration for failover for Standalone.

We propose enriching Samza to assign each TaskInstance a role – active or State-Standby.
Active tasks are as they exist today.

NOTE: Other desirable roles can also be added for tasks, and this capability can be used for other Samza enhancements.

2. Allocation of active and standby containers in Samza-YARN
We propose the following:

Enrich the JobModel to include both active and State-Standby tasks.
Enrich the locality mappings to include task to host mappings, and deprecate the existing container to host mapping.
In the absence of dynamic-work-assignment and auto-sizing in YARN, containers can only have either all-active or all-standby tasks, more on this below.

We add a new StandbyAwareContainerAllocator in YARN to maintain the following invariants, when allocating tasks (and hence containers to hosts)

Invariant-1: An active and its corresponding standby task/container should not be on the same host.

Invariant-2: An active task/container should be started only after its corresponding standby has been successfully stopped. 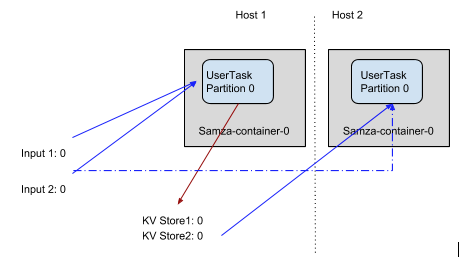 like active containers. So, an application’s lifecycle is tied into both the active and standby containers, i.e., a job is considered deployed only when all its

containers have been successfully deployed. Failures of either type of container carry equal impact to the job’s lifecycle.

The JobModelManager which reads the container.count from config and creates the JobModel, can then read the job.hot-standby.enabled flag, based on which will

Note that, the user could specify to use more than one standby tasks for each active task using the job.hotstandby.replicationcount config, which the JobModelManager will

factor-in when computing the JobModel.

An existing job that adopts this feature, will have preferred-hosts for its existing stateful active containers. Such jobs, will not however have a preferred-host for

Note that, on the first-deploy the standby containers will not have any PreferredHosts in the locality mapping and hence all requests for them will be AnyHost requests.

3. Implementing orchestration for failover for Samza-YARN

The ContainerProcessManager is notified of container failure using a onContainerStopper(containerID) callback.

The following steps detail the AM flow in this scenario. See Figure for timing diagrams.

If a container on the same host is not granted because the host is either out of capacity or unreachable due to a network partition or dead. In this case the resource request will “expire.”

Invariant: An active container should be started only after its corresponding backup has been stopped.

B. Failure of a standby container

the standby container will be started on the host if it passes Invariant1 above.

Additional metrics: There are an additional set of metrics to be added for standby containers. These include:

#Occurrences where an active container could not be failed to a standby.

4. Implementing allocation and orchestration for failover for Standalone

During failover, the leader re-evaluates the StreamProcessor-task assignment, such that,

b. The task-load is evenly distributed amongst the surviving StreamProcessors to the extent possible, while minimizing (ideally 0) the number of tasks that are not started on their backups.

These changes will be incorporated in the ZkBasedJobCoordinator.

Therefore, the onus of sizing the resource requirements of the StreamProcessors in Standalone is on the job owners – they have to account for StreamProcessor failures

when allocating memory and CPU at deployment time.

Can the Samza-YARN failover behaviour be such that surviving containers have an even distribution of of active and standby tasks?
In theory yes, in practice, no because of the following limitations:

7. Enhance 3 to perform failover without stop-start in YARN.

The only deprecation this design brings it to deprecate the container-host locality mappings in the coordinator stream/metastore, and instead

In this option, the ContainerRunner for the hot-standby container does not create a SamzaContainer object. It simply runs a JVM process with a RestoreStorageManager (an enhanced TaskStorageManager), that created the required SysConsumer objects and reads from the continuously to perform putAll on store objects.

Pros: Lightweight as compared to a. -- hot-standby containers have less idle overhead than active containers. 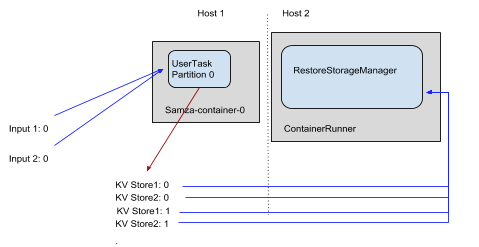 No extensibility of this abstraction.

ContainerRunner needs to change to launch a SamzaContainer or a RestoreStorageManager depending on the container’s type.

RestoreStorageManagers will also need to support (in addition to the state-replication functionality):