Samza users running long running pipelines need a way to gracefully drain them in preparation for an upgrade. The upgrade could be due to changes to transforms or backward incompatible changes in data schema. The only option currently available to the user is to abruptly stop the pipeline and reset intermediate data which could lead to loss of buffered data. User logic is expected to constantly evolve and schema changes are often backward incompatible. It is therefore imperative to provide the ability to seamlessly stop and upgrade their pipelines without losing any buffered data.

Samza currently offers various job management commands like submit, kill, status, through the  ApplicationRunner and StreamJob API. Kill is currently used to cancel a running pipeline. It immediately triggers shutdown in SamzaContainer which in turn halts processing of the pipeline in the RunLoop. Such abrupt cancellation can lead to unprocessed in-flight data. In-flight data refers to data that is pending processing in the intermediate topics (shuffled data) or outstanding state. Samza provides fault-tolerant processing of streams through its at-least once guarantee. It ensures that the job reprocesses messages from previous checkpoints when it resumes. This guarantees that any inflight-data that was left unprocessed upon termination is re-processed.

Abruptly stopping a pipeline can, however, be a problem if there are backward incompatible changes in the intermediate data schema after restart. Any inflight data in intermediate streams will cause failure upon reprocessing as it cannot be deserialized due to the incompatible schema. The usual fix to get past the serde issue for shuffled data is to switch to a fresh intermediate stream. This is achieved by changing the opId for the PartitionBy operator in samza high-level API and the intermediate transform names in Beam API as the intermediate topic names are derived from them. Samza persists window and timer data in local Rocksdb state which could run into the serde issues as well. If the Samza pipeline is using timers and windows, any outstanding samza managed state would need to be reset along with its backing changelog stream.

These fixes only get the pipeline running again but the inflight intermediate stream data and any samza managed state that was reset is consequently lost. Aside from the data loss, this process of a pipeline upgrade is evidently cumbersome. Therefore, it is important to support the ability to drain and stop a pipeline smoothly prior to making an upgrade which involves an incompatible intermediate schema change.

The work here is scoped to drain only intermediate stream (shuffle) data and system-managed state. The onus of clearing user state like LocalTable, if required, is on the user. System managed state comprises of window aggregation state and timers. The proposed approach will prematurely emit window panes and fire all timers , thereby, draining all state. Continuation of state post drain is beyond the scope of this work.

We propose a drain operation for Samza pipelines which halts the pipeline from consuming new data, completes processing of buffered data and then stops the pipeline.

Below is the high level approach with finer details covered in the sections below:

We introduce DrainNotification which should be written to the coordinator stream store to notify the pipeline to trigger drain. This work will also provide utilities classes to aid with writing DrainNotification to the metadata store.

Samza container will periodically check for drain notifications. Once it does encounter one, we first advance the watermark to infinity for all source streams which is effectively equivalent to converting an unbounded source to a bounded source. This guarantees that any buffered window data is processed and timers are fired. Watermark will be propagated to the downstream stages of the pipeline thereby ensuring that all local state is processed

Next, a custom drain control message is inserted as an in-memory marker in a source SSP pending queues to indicate that the pipeline is draining. All data from source SSPs is processed till the drain event is encountered. Samza container shuts down once all tasks have received a drain control message for all the SSPs they are consuming, including any intermediate stream SSPs. Tasks will perform a commit before shut down. 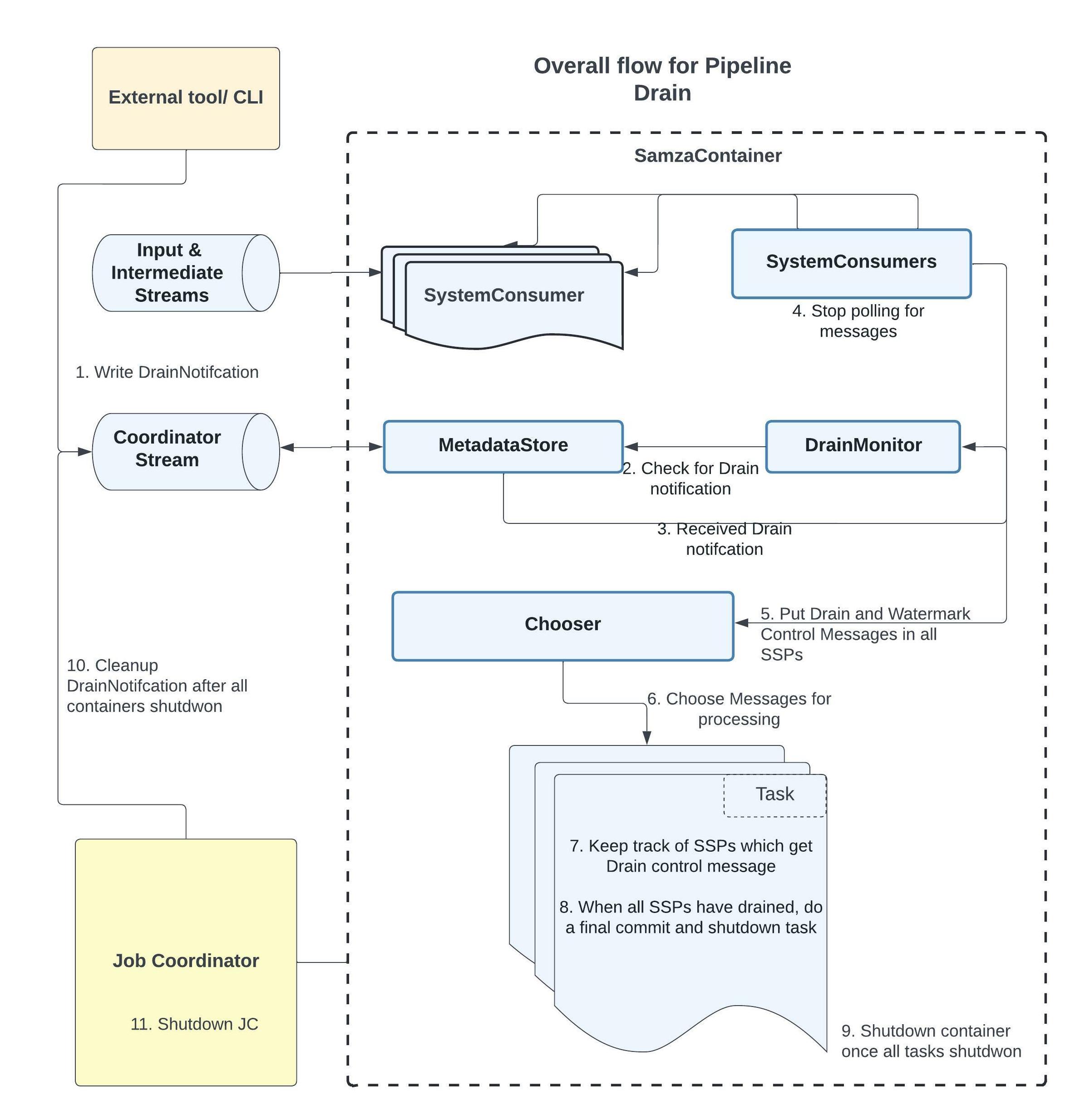 This section delves into the details of notifying samza pipelines to drain.

We introduce classes- DrainNotifcation and DrainUtils. DrainNotifcation is used to signal to the samza engine to start drain. DrainUtils provides the ability to signal drain for a Samza job. It uses a namespace-aware coordinator-stream backed metadata store to read and write a drain notifcation on the coordinator stream. Kafka coordinator stream backed metadata-store acts as the control channel in Samza, which makes the drain notification available to all containers for the job. DeploymentId will be different for every deployment of the job and will be used by the containers to validate if the drain action was intended for the current deployment. The config, app.run.id, is used to uniquely identify the current deployment in a container. DrainNotification will be cleaned up from the coordinator stream by the job coordinator on successful shut down.

Once the user triggers a drain by writing a DrainNotification, it is available on the coordinator stream for all containers to process.

The run loop orchestrates reading and processing messages, checkpointing and windowing among tasks. RunLoop will perform drain in the following steps:

Once drain is completed and the samza job is re-deployed with intermediate schema changes, it is imperative that samza doesn’t replay user messages from before the drain control message from the intermediate stream. TaskInstance will guarantee it by performing a final commit before task shutdown in a blocking way. TaskInstance’s commit method currently performs checkpoint writes on a commit executor which makes it async. This operation should be blocked when in drain mode.

Samza high-level API provides a rich set of operators which can be chained to form a DAG of operations on the MessageStream. StreamOperatorTask is a StreamTask implementation which takes the operator graph and processes input messages by traversing the DAG.

handleDrain will be added to the base OperatorImpl implementation which executes when all input streams to the operator have been received. In the case of a broadcast or partition operator, handleDrain will write Drain control messages to the intermediate stream for propagation.

Samza supports two notions of time. By default, all built-in Samza operators use processing time. Samza supports event-time operations through the Beam API. Whenever the user signals a drain, the watermark is advanced to infinity through watermark control messages. Beam’s samza runner keeps a local rocksdb state for timers and window state. Timers will be fired and window data is processed as a consequence of the watermark being advanced to infinity.

Advancing the watermark doesn't have any effect in Samza since windowing is processing-time based. Samza high-level API supports window operations on MessageStream. It keeps a track of window data in local rocksdb state and tracks the triggers in-memory. When the window operator receives drain, all the triggers will fire and results will be emitted from the window operation. This is implemented by overriding the handleDrain in WindowOperatorImpl.

Approach 1: Drain on by default every stop

One approach is to perform drain by default on every pipeline stop which would obviate the need to write DrainNotification using the DrainManager. Rest of the operations would be the same. When samza engine drains inflight data, it will also have to deal with all the buffered window state and timer data. Given the nature of streaming pipelines, there will always be incomplete windows at any point in time. This means that always draining the pipelines will lead to emitting incorrect windows and firing all timers on every stop. Hence, draining should not be performed on every stop but instead be reserved for exceptional cases where the user has to make a backward incompatible change to intermediate schemas.

The plan is to release this feature with Samza 1.8  release