However, Samza currently is not able to handle partition expansion of the input streams for stateful jobs. For example, if user is running a stateful job using GroupByPartition as grouper and the partition of the input stream has increased from 2 to 4, then partition 3 may be assigned to a new task after partition expansion. Because the new task handling partition 3 does not have the previous state to resume the work, a key-based counter would wrongfully start from count 0 for a specific key that was reassigned from partition 1 to partition 3 after the expansion, instead of correctly starting from the previous count held by task 1.

The goal of this proposal is to enable partition expansion of the input streams while still allowing stateful jobs in Samza to produce the correct result.

This design doc provides a solution to increase partition number of the input streams of a stateful Samza job while still ensuring the correctness of Samze job output. The solution should work for all input systems that satisfy the operation requirement described below, i.e. 1) hash algorithm should be implemented in the form of hash(key) % partitionNum and 2) partitionNum should be multiplied by power of two when we increase it. The motivation of increasing partition number of Kafka topic includes 1) limit the maximum size of a partition in order to improve broker performance and 2) increase throughput of Kafka consumer in the Samza container. Other input systems may have different reasons for partition expansion.

The current solution would keep task number unchanged and use a proper partition-to-task assignment to make sure the Samza output is correct after partition expansion. An alternative solution is to allow task number to increase after partition expansion and uses a proper task-to-container assignment to make sure the Samza output is correct. The second solution, which allows task expansion, is needed in order to scale up the performance of Samza. Note that this solution would also allow partition expansion for stateful job that doesn't use join operation for co-partitioned streams. However, the second solution is much more complicated to design and implement than the solution proposed in this doc. And it doesn't enable the partition expansion for stateful Samza jobs that uses join operation for co-partitioned streams (See Rejected Alternative section), which can be addressed by this proposal. Thus, these two solutions don't replace each other and can be designed independently. We plan to use the first solution described in this doc to enable partition expansion as a low hanging fruit. The feature of task expansion is out of the scope of this proposal and will be addressed in a future SEP.

Operational Requirement of the Input System

The expansion expansion can be supported after this proposal if and only if the partition expansion algorithm in the input system meets the following requirement:

For example, this requirement is satisfied by Kafka when the following two requirements are met:

The partition number of any stream that is used as input stream of stateful job should always be multiplied by power of two when we increase it.

Note that this can be trivially supported in Kafka.

The underlying system should ensure that messages with the same key from the same producer are always consumed in the order they are produced before and after the partition expansion.

Note that this requirement is not currently supported in the Kafka. For example, say the partition is expanded from 2 to 4. Messages with a given key may be produced to partition 1 before expansion and to partition 3 after expansion. Because Kafka consumer does not guarantee order of message delivery across partitions, it is possible that Samza consumes messages with that key from partition 3 before partition 1 which violates the requirement. Thus additional development work is needed in Kafka to meet this requirement. We will provide in this doc the link to the KIP once it is available.

Users can provide custom implementation of this interface and specify it to be used by JobCoordinator to calculate JobModel. It allows Samza to support task expansion for any input system whose partition expansion algorithm can be expressed by this method.

More specifically, GroupByPartitionFixedTasks will map a given SystemStreamPartition ssp to the taskName which is determined using the following algorithm: 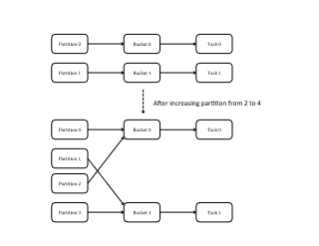 JobCoordinator is already monitoring partition expansion of input streams as of current Samza implementation. When JobCoordinator detects partition expansion of any input stream, it should re-calculate JobModel, shutdown all containers using the off-the-shelf Yarn API, wait for callback to confirm that these containers have been shutdown, and restart container using the new JobModel.

This method returns the index of the partition that should contain all messages in the partition currentPartitionIdx if the input stream has NEVER been expanded.

1. Add the new method to the existing interface SystemStreamPartitionGrouper instead of creating a new interface.

The advantage of this alternative solution is that it requires less interface class and shorter class hierarchy. But we choose to follow the existing pattern of interface extension in Samza as we do with BalancingTaskNameGrouper.

2. Use additional repartitioning stage to repartition data from input stream to another internal stream of the old partition count

1. Allow task number to increase instead of creating a new grouper class.

Allow task number to increase is useful since it increases the performance of a given Samza job. However, this feature alone does not solve the problem of allowing partition expansion. For example, say we have a job that joins two streams both of which have 3 partitions. If partition number of one stream increases from 3 to 6, we would still want the task number to remain 3 to make sure that messages with the same key from both streams will be handled by the same task. This needs to be done with the new grouper classes proposed in this doc.