The Sling 10 release is focused on adding improved support for newer Java versions, but we managed to sneak in a couple of improvements as well. Please see the full details below.

Sling now fully supports Java 9, with the integration tests running on Java 8 and Java 9 side-by-side. Java 10 has received the same attention in terms of testing, but since it is not officially released we can not declare it as fully supported.

Change of artifactId for the main Sling artifact

In order to keep the Slingstart artifact size under control, we no longer embed the tika-bundle uber-artifact. Instead, we include tika-parsers and explicitly support parsing of PDF documents via PDFBox. Consumers that desire to parse other document types can include other dependencies as OSGi bundle as needed.

Discovering parsers that do not work can be done by starting Sling with the additional -Dorg.apache.tika.service.error.warn=true argument. See also Troubleshooting Tika .

The default Slingstart now is 32% smaller, dropping from 98MB to 67MB.

Direct access to a DataStore binary when the repository allows it

Sling is now able to directly redirect clients to secure URLs of DataStore binaries when the underlying repository allows it. This feature is intended to allow quick serving of content from remote services such as S3 without having to stream the binaries from Sling.

When an exception is logged, the Bundle-SymbolicName and the version of the bundle containing each stack trace element are shown. The intent is to simplify debugging and support when logs are available but bundle versions are not known.

We use the latest stable Oak version from the 1.6 stream, bringing in over 140 fixes and improvements. See the full list of resolved issues for more details.

Working with service users is now made simpler by a new Web Console addition which allows inspecting and managing Service Users. 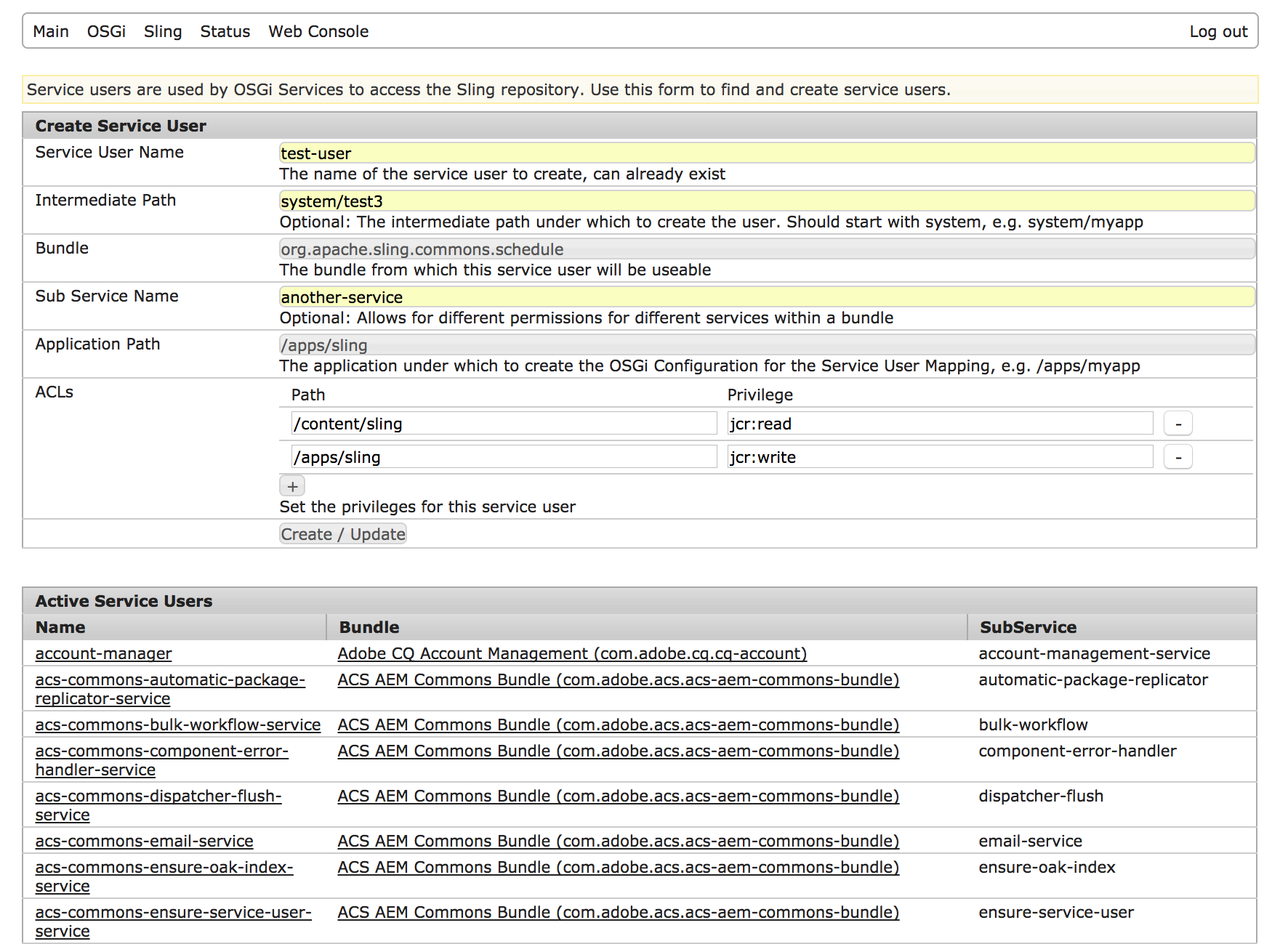 Service users may now be declared as having a list of principal names which exhaustively map the privileges they contain. This style of declaration is preferred since it reduces redundancy and adds clarity to the privileges used by a certain service user. Pre-authentication can also lead to performance improvements.

The OSGi configuration differs from the standard model by using an array to hold the principal names, as opposed to a single value. An example can be seen below

See the Oak documentation on pre-authentication for more details.

Enhancements to the repoinit language

We have added several improvements to repoinit, including

Support for mounting JSON files in the bundle resource provider

The feature can be enabled by adding a directive to the header entry: propsJSON:=EXTENSION, e.g. propsJSON=json.  All files having the configured extension will be treat as JSON files containing properties for the resources.

It is possible to have a file and a JSON file for the same resource, like

The json file will then contain properties (value map) for the resource, this includes defining the resource type. Such a json file can also contain a deep tree of objects like: