This page documents decisions we made while finding out how to best work with Git as well and various quality-of-life tips related to Git.

This is documented in the Sling Aggregator Github module.

Force pushing to the master branch, or to other branches that are shared with others, is discouraged. It makes collaboration harder and potentially impacts other tools as well - Jenkins, SonarCloud, etc. If you need time experimenting and fiddling with history, it's better to start working with an individual repository and then bring it to Sling, once it's stable.

Maintaining a linear history in git is preferred, especially for small contributions. Each commit should be buildable and correct by itself, as much as possible. This is beneficial when reviewing history for changes and also when running git bisect .

In practice, we have found that:

It is also important to maintain the original author of the pull request, giving them credit for their contribution. This is also useful when compiling various contribution metrics, e.g. in Kibble.

When accepting an external contribution we will import it into the sling-whiteboard repository. Before making a new release, we will move it to its own repository with the release manager also proposing a proper artifact id and therefore repository name.

It is recommended to provide ownership information when accepting new contributions by maintaining the original Author git header.

See also dev@sling - Where do we put new git modules?

In case of code developed externally and not initially intended to be hosted at the ASF IP clearance is required. The general rules are outlined at http://incubator.apache.org/ip-clearance/ . For a hands-on example, the Sling Journal-based Content Distribution is a good example:

Repository creation is open only to PMC members. If you are not part of the PMC please ask on dev@sling.apache.org and someone will do this for you.

When creating new repositories we follow the convention of deriving the repository name from the Maven artifactId. The full logic can be found in the migrate-to-git.sh script, but the gist is:

It is recommended to announce the intention on the mailing list, without calling a formal vote, since renaming repositories requires ASF infra manual intervention.

Creating a new repository is done using the web UI at https://gitbox.apache.org/ . Please fill in the fields in the following manner:

See a recent example below 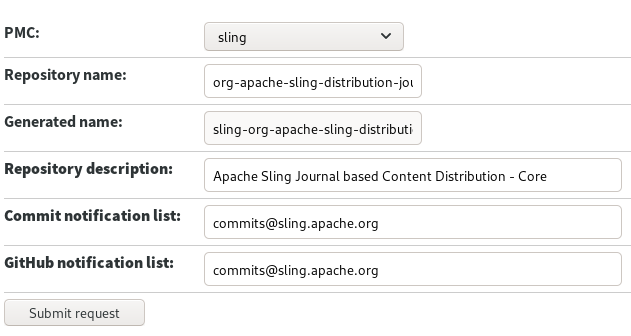 Sling uses the default branch name master . To keep things simple for our tooling ( repo tool, Jenkins ) please create the repository locally and use master  as a branch name when pushing the initial changes to the repository. See Removal of problematic language for more context.

See also the discussion from INFRA-22359 - Getting issue details... STATUS

The scripts will be created in gitbox and github at the same time, but permissions will be granted to the GitHub repository sometime later, due to the way ASF infra tooling works. If permissions don't appear in two hours, raise an INFRA ticket. In the meantime you can use the gitbox backend to push your changes.

Importing existing code from the whiteboard

2. Reduce the repository to only the subfolder you're interested in

3. Change the origin remote URL to the desired one

4. Review your changes and push them

Ensure that at a minimum the repository contains the following files:

The sling-aggregator/add-badges.sh script automates the creation of badges for the README. You will need a valid GitHub token for it. To add the badges for just a single repository, run.

By placing an .asf.yaml file one can customize certain GitHub settings like label, features and merge options.

To quickly create links to Git commits in JIRA a script such as the one below can be used: