The logo contest is over; this page is kept for historical reasons only. See LogoDetails for up-to-date downloads.

Discussion of the logo contest

Further discussion went on both on Bugzilla and the mailinglist (the thread got broken up into 1 2 3 4 parts by sucky MUAs). In the end we decided for ChristianRauh's version, further information is available in bug 3803.

Note: please sign your comments. Otherwise it may appear that you're speaking in an 'official' capacity for the SpamAssassin project, which is not likely to be the case.

I would suggest that the contest be done in a two-phase style. The developers should pick 2 or 3 of their favorites and then ask the designers for a final version. This will allow a designer to put the required effort to make a real logo, most of the ones in there still look like drafts.

It takes a lot of work to get things proper and I believe many of the contestants, including myself, would be more prone to put more work if you know that your idea is being seen as a real option.

And even then, once the finalist is chosen I would suggest that the developers and the designer work together for a while to really get it the way they want. This interative process is what's usually done in a professional setting I don't see why not follow it here.

The following are comments from the community about the LogoContestEntries. If you want to add your comments, please click the "Edit Text" of this page link below. (The comments are in order)

I vote for the mixed-case version at the URL on the previous line (not the "SA" logo, though - the two-letter acronym "SA" is too overloaded.)

1.0.3 - Mark Allen c/o Richard Humphrey, second image (target mark) – It's simple, neutral (most likely not offensive to anyone) and an international symbol (the target mark that is). – DanielKnippers

1.0.8 - gives the image of a recycle bin in the main logo. That is not consistent with the idea of a spam filter IMO, and shows the unhealthy influence of a Windows user <g>. Recycle bins are not for trashing things! – MichaelBell

1.0.9 - The flames on the envelope may give the opposite viewpoint of 1.0.8 - instead of being too permissive, here's a fearful vision of the future where your mail will catch on fire or be destroyed. Again, this lacks the feeling of discrimination. – MichaelBell

I think that most people will draw the conclusion that black mail equal bad mail. – ChristianHansen

A friend of mine suggested a bunch of white mail which float by untouched, while the evil black spam burns. – MalteStretz

Good idea. I made an alternative logo a few week's ago with only a white mail marked with an OK stamp. It gave me a good laugh though when looking at it as a whole. The meaning of the name Assassin didn't match the angel-like symbol at all. But a combination of them both might work. – UlfEdvinsson

1.0.15 - the lock on the envelope. Well this is closer than 1.08/1.09 in my opinion but still doesn't give the right feel - it would be great for SECURING or ENCRYPTING, but maybe not right for spam. – MichaelBell

1.0.24 - I like it! The only thing I'd change is the orange e-mails... the colour seems to clash with everything else. – HenryStern

1.0.24 - This is also my favorite. My only concern is that in the extreme zoom version (120x60), the waving head band looks to me too much like a portion of a jester's hat (see here). In the other pictures, it looks fine. If you could just change the shape slightly, I believe you could avoid that very un-ninja-like connotation. – DanKohn

1.0.37 & 1.0.38 - Both of these designs (apache arrow through mails, and spam in a pan) are both quite compelling, and delightful departures of the styles. – MichaelDouma

1.0.37 – *VERY* nice. I really like the subtle Apache feather inclusion. I would love to see some examples of this in button form. – RodBegbie

1.0.39 - Like it, but FYI http://www.fatscripts.com has the very very same logo! – ChristianBecker

1.0.42 - I agree, by far, this is the slickest, most cunning, and most obvious. I like the bottom left version where the blades are better seen. The font is not my favorite, but the roundish font nicely softens the killing tone. – MichaelDouma

With the optional request for an Apache feather and a ninja I can't get the character, Captain Feathersword, out of my head (from The Wiggles). – StevenJohnson

Might I suggest (and I do so humbly for my artistic skill is nil) to the artists that if one wants to illustrate the action upon the mail itself that the motif of filtering or selectivity is paramount. – MichaelBell

In my opinion, logo designs are free to use their own artistic license and whatever motifs they feel appropriate. – JustinMason
Well, sure. And make no mistake – these folks are 1000x the artist I will ever be. – MichaelBell

One potential way of illustrating the concept of selective filtering would be showing a ninja/assassin (or perhaps just his/her sword) cutting a certain mail in half while letting another one safely by. Of course, this somehow needs to look like a decision by the ninja/assassin/sword to kill some while letting some pass, and not just that they're overwhelmed with enemies, or else we would be sending the wrong message on the server resources SA requires. Perhaps the assassin could motion for one piece mail to pass while skewering the other one. Just a thought from a graphically-unskilled fan of the software. - DanKohn

This posting to the mailing list contained some interesting background infos on the words "assassin", "ninja", etc. Unfortunately can't I post it here as the japanese characters aren't preserved. (MalteStretz)

I'm personally not too keen on the violent imagery in a lot of the logos (such as the crosshairs). Considering the militant nature of a lot of anti-spam crusaders, I think that a logo with violent imagery would reflect poorly on our project and may cause people to associate us with the more militant folks. I'd like to see some more fun entries, like the old rubber ninja logo. (HenryStern)

Seems tricky to use a non-violent image, given that the word Assassin figures so prominently in the name of
the product. I'm thinking that an umbrella in a heavy storm is an appropriate image for what SpamAssassin does,
but it doesn't fit the name very well at all.

Also, you might want to warn people to keep track of the fonts that they use as well as the clip-arts.
We've had problems where I work where a cool new logo came out and then we found out we had to licence
the Adobe-owned font to use it. (CharlesBrabec)

It shouldn't be too hard to find some non-violent imagery involving ninjas. You'll just have to be creative. I've only seen one logo so far that catches my eye, so be creative and give me more choices for how to cast my vote! (HenryStern)

Regarding avoiding violent imagery – that's why the little plastic ninjas featured so prominently in the original logo; they're assassins, but they're quite non-threatening about it! Some high-res photos of ninjas to use as source material, if anyone fancies it, can be found in the link at the bottom of the LogoContest page. (JustinMason)

Expanding on Dan Kohn's comments, in addition to keeping a light "assassin/ninja" theme, a successful logo should immediately convey the concept of "filtering email." I do not know what would work well, but a few graphical concepts come to mind, shown below: -MichaelDouma 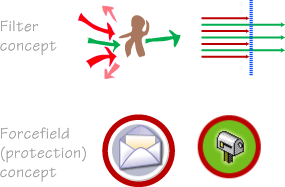 Is it appropriate for attendees to influence/lobby the jury in the voting stage?

I think Michael's comments have been helpful and I have no problem with it. However, if someone really wants to influence me, I recommend bribery. – DanielQuinlan