Kafka provides at-least-once messaging guarantees. Duplicates can arise due to either producer retries or consumer restarts after failure. One way to provide exactly-once messaging semantics is to implement an idempotent producer. This has been covered at length in the proposal for an Idempotent Producer. An alternative and more general approach is to support transactional messaging. This can enable use-cases such as replicated logging for transactional data services in addition to the classic idempotent producer use-cases.

What is transactional messaging?

Producers can explicitly initiate transactional sessions, send (transactional) messages within those sessions and either commit or abort the transaction. The guarantees that we aim to achieve for transactions are perhaps best understood by enumerating the functional requirements. 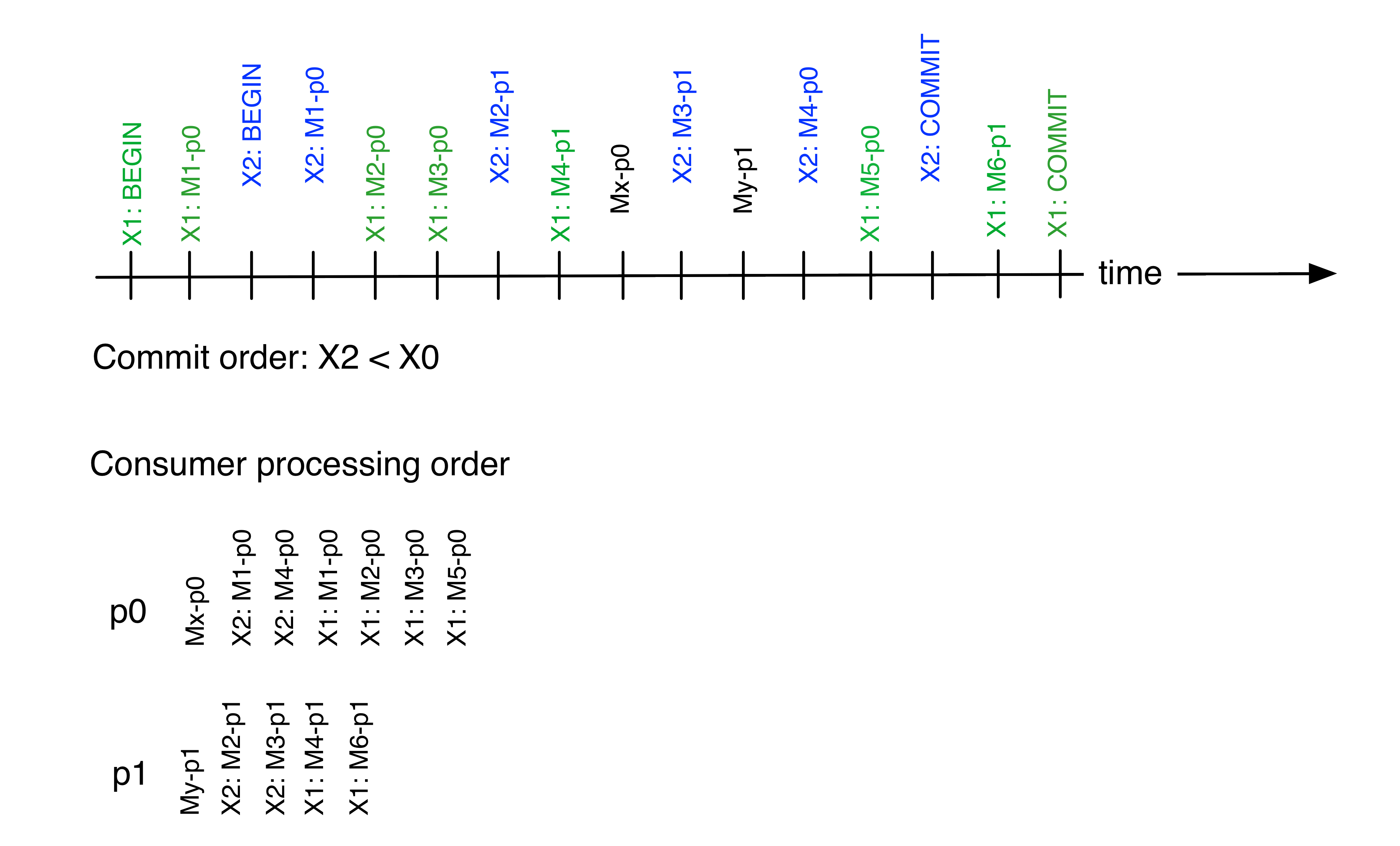 Furthermore, we have the following requirements pertaining to performance, usability and implementation complexity: 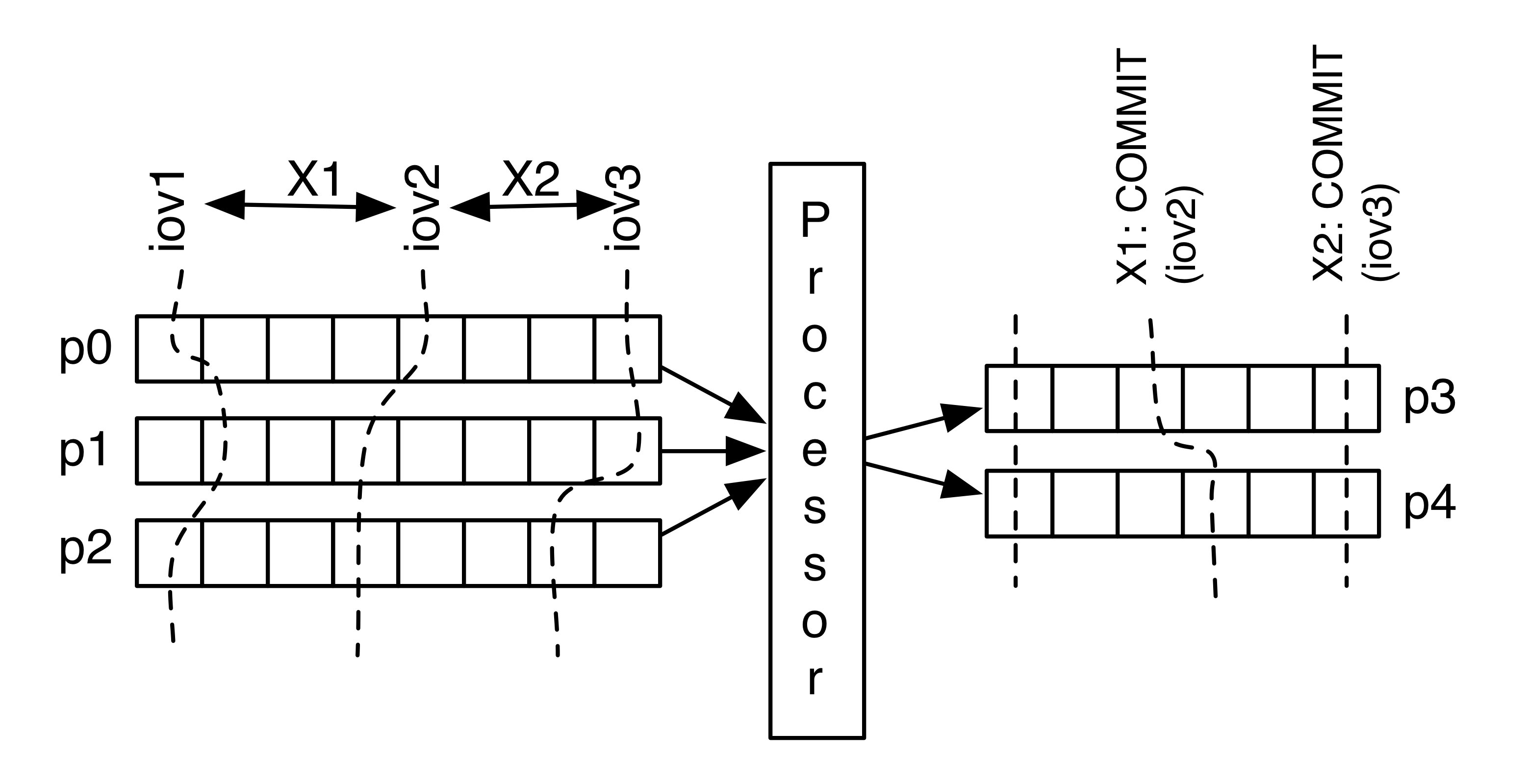 The transaction group is used to map to a specific transaction coordinator (say, based on a hash against the number of journal partitions). The producers in the group would need to be configured to use this group. Since all transactions from these producers go through this coordinator, we can achieve strict ordering across these transactional producers.

In this section, I will go over the need to introduce two new parameters for transactional producers: producer ID and producer group. These don't necessarily need to be part of the producer configuration but may be specified as a parameter in the producer's transactional API.

The preceding overview describes the need to associate the input state of a producer (or in general a processor of some input) along with the last committed transaction. This enables the processor to redo a transaction (by recreating the input state for that transaction - which in our use cases is typically a vector of offsets).

We can utilize the consumer offset management feature to maintain this state.  The consumer offset manager associates each key (consumergroup-topic-partition) to the last checkpointed offset and metadata for that partition. In the case of a transactional processor, we would want to save the offsets of its consumer that are associated with  the commit point of the transaction. This offset commit record (in the __consumer_offsets topic) should be written as part of the transaction.  i.e., the __consumer_offsets topic's partition that stores offsets for the consumer group will need to participate in the transaction. So (for example) suppose a producer fails in the middle of a transaction (which the transaction coordinator subsequently expires); when the producer recovers, it can issue an offset fetch request to recover the input offsets associated with the last committed transaction and resume transactional processing from that point.

There are a few enhancements that we need to make to the offset manager and the compacted __consumer_offsets topic in order to support this. First, the compacted topic will now contain transactional control records as well. We will need to come up with an eviction strategy for these control records. Second, the offset manager needs to become transaction-aware - specifically, an offset fetch request should return an error if the group is associated with a pending transaction.

We need to ensure that whatever retention policy is in place does not delete a log segment if the transactional HW is within that log segment. This could just be an additional parameter to the retention policy. i.e., segments including and following that offset should not be deleted.

(Assuming no failures at each step.) 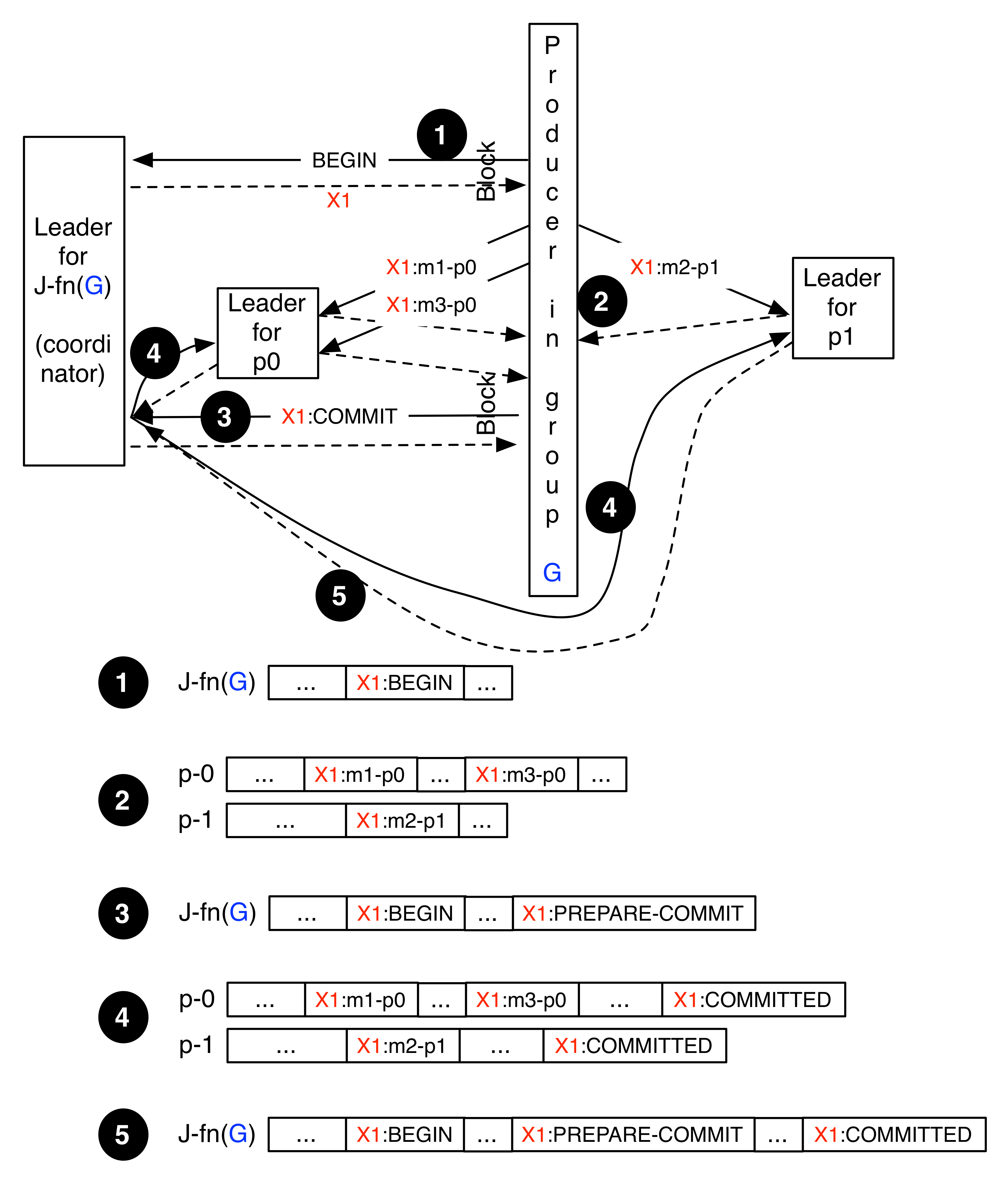 Producer: Send transaction payloads (i.e., records) to the leader brokers of the data partitions. Each record will contain the TxId and TxCtl fields. The TxCtl is really only required to mark the final commit (or abort). The producer request envelope will include the producer ID and generation as well, but these will not be appended to the data logs.

EndPhase (When the producer is ready to commit a transaction,)

Compacted topics discard earlier records with the same key during the compaction process. Is this legal if those records are part of a transaction? It is perhaps a bit weird but may not be too harmful since the rationale for using the compaction policy within a topic is to retain the latest update for keyed data.

The above transaction flow contains a number of points where the producer may need to block:

One nuance to this is when a producer is starting up for the first time and obtains its group state which will be empty and therefore sets its generation to zero. If it soft-fails at that point and a fail-over producer repeats the same process, we could end up with two producers with the same ID and generation. I think this can be addressed simply by having the transaction coordinator ensure that for a given producerId-generation combination, there can be only one producer connection. If it detects this condition, it can close both connections and abort any transaction that may have been initiated. (The leader brokers should also keep track of in-flight transactions, their associated producerIDs-generations and do the same.  Since the abort from the coordinator can arrive before the producer actually stops sending data, the broker needs to reject those producer requests since it does not correspond to any valid pending transaction.)

Transaction support should be sufficient to achieve idempotence. However, a producer will need to buffer messages of the transaction until it receives the commit response for that transaction. We can avoid this need to buffer by incorporating sequence numbers in the message header and incorporating pieces of the original idempotent producer proposal. In fact, we would probably want to have some form of the idempotent producer to be available (stand-alone) to avoid aborting long-running transactions that run into (say) a temporary network glitch during the data send phase.