THIS PAGE MAY BE OBSOLETE! Should we delete it?

Integrating Solr and ZooKeeper allow us a lot more flexibility for dynamic, distributed configuration. Additionally, it does not require a breakage of back-compatibility and it can use the existing Solr infrastructure.

There will be a ZooKeeperComponent to be configured through solrconfig.xml. The ZookeeperComponent may expose the ZooKeeper client instance which could be used by any plugin for purposes such as adding/removing key/values or performing master election etc

An example configuration for the ZooKeeperComponent in solrconfig may look like the following:

After the nodes are started it may look as follows 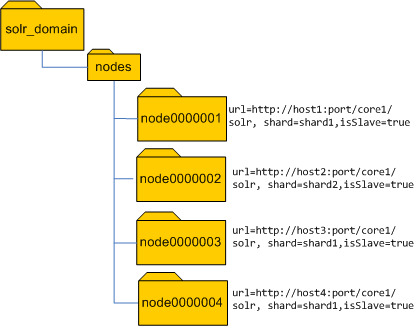 ZooKeeperAwareShardHandler's configuration will contain the name of the shard to which this node belongs. On startup, it will get the core's ZooKeeperComponent and add a key/value (the shard name) in ZooKeeper to the current core's node.

With the above configuration, on initialization, the ZooKeeperAwareShardHandler will get the ZKClient from the SolrCore and register itself as a sequential node under the path "/solr_domain/nodes" and value url=localhost:8983/solr/core1

Shards are ephemeral and sequential nodes in ZK speak and thus go away if the node dies.

ZooKeeperAwareShardHandler always maintains a list of shard names and a list of nodes that belong to that shard. If the setup has all the slaves sitting behind a loadbalancer, the value of 'me' points to the loadbalancer instead of the node's host:port. The Shardhandler would automatically load balance if there are multiple nodes serving up a shard.

In this design the Zookeeper is used for leader election. When Solr starts up, the ReplicationHandler , if mastercandidate=true ,gets the ZookeeperComponent and gets hold of the Zookeeper client. It tries to become a master by creating a znode (SEQUENTIAL|EPHEMERAL) under the 'masterZnode'. The instance which succeeds in becoming the leader will be the master. All other nodes will treat this as the master. if this node dies another leader is elected and that becomes the master.

Nodes can register themselves as Masters by adding their entry to a Master Group and marking themselves as a master. The ReplicationHandler can then be configured to subscribe to that Master Group, getting the first one out of the list of children of the group (this is dependent on ZooKeeper supporting getFirstChild() which it currently does not) Masters are ephemeral. If that is not implemented, then we need some other way of selecting the master. For now, it could just be configured so that there is only one master.

Thus, if there are two groups of Masters, then it would look like this: master_group_1/

The trick here is how to keep all the masters in a group in sync. Ideas: 1. Servlet filter that replicates out indexing commands to other masters in a master group 2. backup masters replicate from the master 3. Others?, as neither of these is 100% fault tolerant

Through the ZK req handler, slaves can be moved around, at which point they will pull the index from the master in their group and thus you can have rebalancing. Additionally, new nodes that come online w/o an index will go to their master and get the index. The replication handler already handles replicating configuration files, so this is just a config issue.

The ShardHandler is automatically setup.