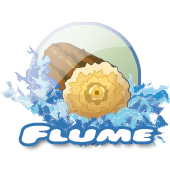 What is Flume NG?

Flume NG aims to be significantly simpler, smaller, and easier to deploy than Flume OG. In doing so, we do not commit to maintaining backward compatibility of Flume NG with Flume OG. We're currently soliciting feedback from those who are interested in testing Flume NG for correctness, ease of use, and potential integration with other systems.

Flume NG (Next Generation) is a huge departure from Flume OG (Original Generation) in its implementation although many of the original concepts are the same. If you're already familiar with Flume, here's what you need to know.

Please file JIRAs and/or vote for features you feel are important.

Flume is available as a source tarball and binary on the Downloads section of the Flume Website. If you are not planning on creating patches for Flume, the binary is likely the easiest way to get started.

1. Check out the source

(Please note that Flume requires that Google Protocol Buffers compiler be in the path for the build to be successful. You download and install it by following the instructions here.)

This produces two types of packages in flume-ng-dist/target. They are:

If you're a user and you just want to run Flume, you probably want the -bin version. Copy one out, decompress it, and you're ready to go.

3. Create your own properties file based on the working template (or create one from scratch)

4. (Optional) Create your flume-env.sh file based on the template (or create one from scratch). The flume-ng executable looks for and sources a file named "flume-env.sh" in the conf directory specified by the --conf/-c commandline option. One use case for using flume-env.sh would be to specify debugging or profiling options via JAVA_OPTS when developing your own custom Flume NG components such as sources and sinks.

After you've configured Flume NG (see below), you can run it with the bin/flume-ng executable. This script has a number of arguments and modes.

Flume uses a Java property file based configuration format. It is required that you tell Flume which file to use by way of the -f <file> option (see above) when running an agent. The file can live anywhere, but historically - and in the future - the conf directory will be the correct place for config files.

Let's start with a basic example. Copy and paste this into conf/flume.conf:

This example creates a memory channel (i.e. an unreliable or "best effort" transport), an Avro RPC source, and a logger sink and connects them together. Any events received by the Avro source are routed to the channel ch1 and delivered to the logger sink. It's important to note that defining components is the first half of configuring Flume; they must be activated by listing them in the <agent>.channels, <agent>.sources, and sections. Multiple sources, sinks, and channels may be listed, separated by a space.

For full details, please see the javadoc for the org.apache.flume.conf.properties.PropertiesFileConfigurationProvider class.

This is a listing of the implemented sources, sinks, and channels at this time. Each plugin has its own optional and required configuration properties so please see the javadocs (for now).

The flume-ng executable lets you run a Flume NG agent or an Avro client which is useful for testing and experiments. No matter what, you'll need to specify a command (e.g. agent or avro-client) and a conf directory (--conf <conf dir>). All other options are command-specific.

To start the flume server using the flume.conf above:

Notice that the agent name is specified by -n agent1 and must match a agent name given in -f conf/flume.conf

When given the agent command, a Flume NG agent will be started with a given configuration file (required).

Run an Avro client that sends either a file or data from stdin to a specified host and port where a Flume NG Avro Source is listening.

The Avro client treats each line (terminated by \n, \r, or \r\n) as an event. Think of the avro-client command as cat for Flume. For instance, the following creates one event per Linux user and sends it to Flume's avro source on localhost:41414.

In a new window type the following:

And in your first window, where the server is running:

Congratulations! You have Apache Flume running!

If you believe you've found a bug or wish to file a feature request or improvement, don't be shy. Go to https://issues.apache.org/jira/browse/FLUME and file a JIRA for the version of Flume. For NG, please set the "Affects Version" to the appropriate milestone / release. Just leave any field you're not sure about blank. We'll bug you for details if we need them. Note that you must create an Apache JIRA account and log in before you can file issues.