This tutorial will be updated whenever new features are added to the Camel Components for Google App Engine.

Goal of this tutorial is to get a non-trivial Camel application running on Google App Engine (GAE). For developing that application the Camel Components for Google App Engine will be are used. The application allows the user to enter the name of a city and an email adsress in an HTML form. The form data are submitted by the user to a Camel application, running on GAE, which retrieves weather data for the given city. It then sends a weather report to the user-defined email addressexample web application generates a weather report for a city that is entered by the user into a form and sends the weather report via email to either the currently logged-in user or a user-defined receiver. The following figure gives an overview. Users of this application need to login with their Google account. 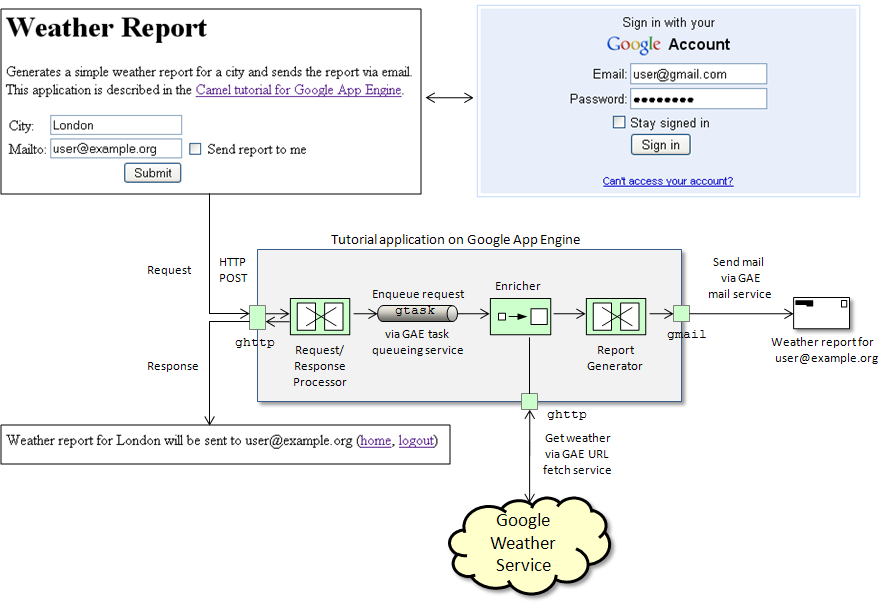 POSTed form data are dispatched to the Camel application via the ghttp component. Then the The application queues the message transforms the report request and enqueues it with the gtask component for further background processing. This includes retrieval of It then generates an immediate HTML response containing information about the city and the receiver of the report. The response also contains a link logging out from the application. In the background, the application retrieves weather data from the Google Weather Service, transforming transforms the data to generate a simple weather report and sending that sends the report by email via the gmail component.

To deploy the example applicationFirst, first checkout the sources with from the Camel code repository.

Open the camel-example-gae/src/main/webapp/WEB-INF/application-web.xml file in an editor and replace the template application name replaceme with the name of the application that you created in the previous section. Optionally, adjust the version number if needed.

Open camel-example-gae/src/main/resources/context.xml file and change the sender property value to the email address of your Google App Engine account.

Then go to the camel-example-gae directory and enter

where version needs to be replaced with the version of Camel you're using. You will be prompted for the email address and password of your Google App Engine account. After deployment the example application is ready to use.

Image Modified where replaceme must be replaced with the application name you entered in appengine-web.xml. The following form should now appear. 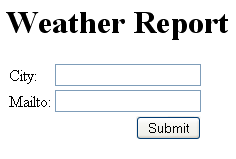 Enter . The application will redirect you to a login page. 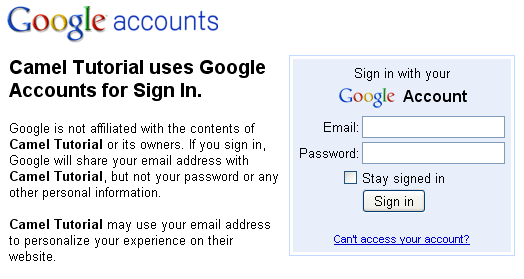 After login, the application displays the tutorial's main page where you can enter the name of a city and your email address, for example:

Then press Submit. The immediate response is

optionally enter an email address where to send the waether report. If you check Send report to me the report will be send to the email address that you used for login.

After pressing Submit the response is

The home link brings you back to the main page, the logout link is to logout from the application (which brings you back to the login page). In the background, the current weather conditions for the user-defined entered city will be obtained retrieved from the Google weather service and a formatted weather report will be send by email. Submitting the form the first time initializes the application on Google App Engine which can take several seconds. Subsequent submissions (within a certain time frame) are served much faster. Check your emails and you should now see a new email with subject Wheather report and content similar to this one:

The report is partly internationalized, depending on the language settings of your browser.

The TutorialRouteBuilder implements the message processing routes shown in the #Overview section. Input form data are received via the ghttp component. After receiving the request a RequestProcessor adds the form data and information about the current user to a ReportData POJO. The ReportData object is then serialized and queued for background processing. Queueing messages on GAE is done with the gtask component. After adding the ReportData object to the queue an HTML response is generated with the ResponseProcessor.

Form data are received via the ghttp component. After receiving the request it is added to the default queue for background processing. Queueing messages on GAE is done with the gtask component. After queueing the request a response is generated for being displayed in the browser. The value of the mailto header is the email address the user entered in the form.

Background processing of the queued messages starts from("gtask://default"). The first step is the construction of the Google weather service URL followed by the weather service invocation using the ghttp component. For example, if the user entered London in the city field of the form the resulting URL is http://www.google.com/ig/api?weather=London

Image Removed. The resulting XML data are processed by the WeatherProcessor:

Background processing of the queued messages starts from("gtask://default"). The first step is to enrich the previously generated ReportData object with data from the Google weather service. The service URL is dynamically constructed by setting the Exchange.HTTP_QUERY header to weather=<city>. For example, if the user entered London in the city field of the form the resulting URL is ghttp://www.google.com/ig/api?weather=London. The weather service is accessed with the ghttp component and the weather service response is aggregated into the ReportData object using a custom aggregator returned by the reportDataAggregator() method. Generating a simple weather report from ReportData is done by the ReportGenerator. The report is then sent by email with the gmail component.