Exactly once semantics (EOS) provides transactional message processing guarantees. Producers can write to multiple partitions atomically so that either all writes succeed or all writes fail. This can be used in the context of stream processing frameworks, such as Kafka Streams, to ensure exactly once processing between topics.

In Kafka EOS, we use the concept of a "transactional Id" in order to preserve exactly once processing guarantees across process failures and restarts. Essentially this allows us to guarantee that for a given transactional Id, there can only be one producer instance that is active and permitted to make progress at any time. Zombie producers are fenced by an epoch which is associated with each transactional Id. We can also guarantee that upon initialization, any transactions which were still in progress are completed before we begin processing. This is the point of the initTransactions() API.

The problem we are trying to solve in this proposal is a semantic mismatch between consumers in a group and transactional producers. In a consumer group, ownership of partitions can transfer between group members through the rebalance protocol. For transactional producers, assignments are assumed to be static. Every transactional id must map to a consistent set of input partitions. To preserve the static partition mapping in a consumer group where assignments are frequently changing, the simplest solution is to create a separate producer for every input partition. This is what Kafka Streams does today.

This architecture does not scale well as the number of input partitions increases. Every producer come with separate memory buffers, a separate thread, separate network connections. This limits the performance of the producer since we cannot effectively use the output of multiple tasks to improve batching. It also causes unneeded load on brokers since there are more concurrent transactions and more redundant metadata management.

It's strongly recommended to read the detailed design doc for better understanding the internal changes. This KIP only presents high level ideas.

The root of the problem is that transaction coordinators have no knowledge of consumer group semantics. They simply do not understand that partitions can be moved between processes. Let's take a look at a sample exactly-once use case, which is quoted from KIP-98:

As one could see, the first thing when a producer starts up is to register its identity through initTransactions API. Transaction coordinator leverages this step in order to fence producers using the same transactional.id and to ensure that previous transactions must complete. In the above template, we call consumer.poll() to get data, and internally for the very first time we start doing so, consumer needs to know the input topic offset. This is done by a FetchOffset call to group coordinator. With transactional processing, there could be offsets that are "pending", I.E they are part of some ongoing transactions. Upon receiving FetchOffset request, broker will export offset position to the "latest stable offset" (LSO), which is the largest offset that has already been committed when consumer isolation.level is `read_committed`. Since we rely on unique transactional.id to revoke stale transaction, we believe any pending transaction will be aborted when producer calls initTransaction again. During normal use case such as Kafka Streams, we will also explicitly close producer to send out a EndTransaction request to make sure we start from clean state. 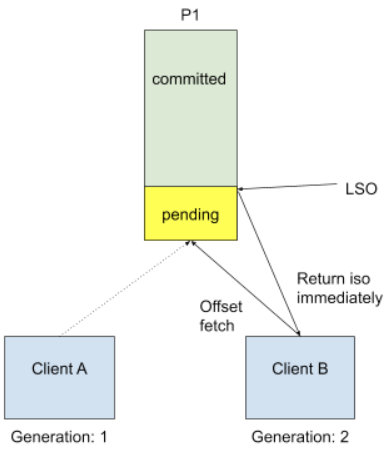 This approach is no longer safe when we allow topic partitions to move around transactional producers, since transactional coordinator doesn't know about partition assignment and producer won't call initTransaction again during its life cycle. Omitting pending offsets and proceed could introduce duplicate processing. The proposed solution is to reject FetchOffset request by sending out a new exception called PendingTransactionException to new client when there is pending transactional offset commits, so that old transaction will eventually expire due to transaction timeout. After expiration, transaction coordinator will take care of writing abort transaction markers and bump the producer epoch. When client receives PendingTransactionException, it will back-off and retry getting input offset until all the pending transaction offsets are cleared. This is a trade-off between availability and correctness. The worst case for availability loss is just waiting for transaction timeout when the last generation producer wasn’t shut down gracefully, which should be rare.

Below is the new approach we discussed: 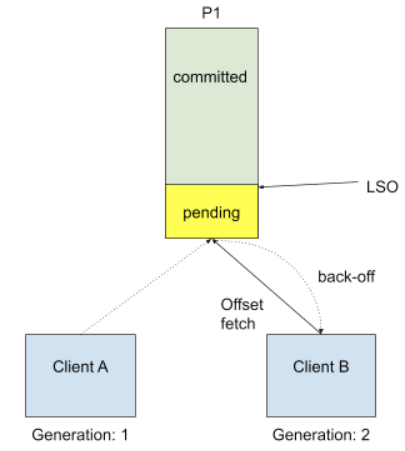 Note that the current default transaction.timeout is set to one minute, which is too long for Kafka Streams EOS use cases. Considering the default commit interval was set to only 100 milliseconds, we would doom to hit session timeout if we don't actively commit offsets during that tight window. So we suggest to shrink the transaction timeout to be the same default value as session timeout (10 seconds) on Kafka Streams, to reduce the potential performance loss for offset fetch delay when some instances accidentally crash.

The main addition of this KIP is a new variant of the current sendOffsetsToTransaction API which gives us access to the consumer group states, such as generation.id, member.id and group.instance.id, etc.

We shall set `transaction.timout.ms` default to 10000 ms (10 seconds) on Kafka Streams. For non-stream users, we highly recommend you to do the same if you want to use the new semantics.

We shall set `transaction.abort.timed.out.transaction.cleanup.interval.ms` default to 10000 ms (10 seconds) on broker side (previously one minute). This config controls the scheduled interval for purging expired transactions, which we need to tune more frequently to timeout zombie transactions.

We will add a new error code for consumer to wait for pending transaction clearance. In order to be able to return corresponding exceptions for old/new clients, we shall also bump the OffsetFetch protocol version.

In the meantime, this offset fetch back-off should be only applied to EOS use cases, not general offset fetch use case such as admin client access. We shall also define a flag within offset fetch request so that we only trigger back-off logic when the request is involved in EOS, I.E on isolation level read_committed.

The PendingTransactionException could also be surfaced to all the public APIs in Consumer:

A zombie process may invoke InitProducerId after falling out of the consumer group. In order to distinguish zombie requests, we need to leverage group coordinator to fence out of sync client.

To help get access to consumer state for txn producer, consumer will expose a new API for some of its internal states as an opaque struct. This is already done by KIP-429, and we just showcase the some high level structure here for convenience.

As we see, the metadata exposed contains member.id, group.instance.id and generation.id, which are essentially the identifiers we use in the normal offset commit protocol. To be able to keep track of the latest metadata information, we will add a top-level API to consumer:

So that EOS users could get refreshed group metadata as needed.

To pass the information to broker, member.id, group.instance.id and generation.id field shall be added to `TxnOffsetCommitRequest`,  which makes txn offset commit fencing consistent with normal offset fencing.

If one of the field is not matching correctly on server side, the client will be fenced immediately. An edge case is defined as:

And here is a recommended non-EOS usage example:

Some key observations are:

For Kafka Streams that needs to be backward compatible to older broker versions, we add a new config value for config parameter PROCESSING_GUARANTEE that we call "exaclty_once_beta". Hence, users with new broker versions can opt-in the new feature (ie, using a single producer per thread for EOS instead of a producer per task).

Additionally, we remove the task-level metrics "commit-latency-max" and "commit-latency-avg" because the current committing of tasks that consists of multiple steps (like flushing, committing offsets/transactions, writing checkpoint files) is not done on a per-task level any longer, but the different steps are split out into individual phased over all tasks and committing offsets and transactions is unified into one step for all tasks at once. Because those metics cannot be collected in a useful way any longer, we cannot deprecate the metrics and remove in a future release, but need to remove them directly without a deprecation period.

Following the above principle, two rounds of rolling bounced for all Kafka Streams instances are required as follows:

The reason for doing two rolling bounces is because the old (ie, 2.5) transactional producer doesn’t have access to consumer generation, so group coordinator doesn’t have an effective way to fence old zombies. By doing first rolling bounce, the task producer will opt-in accessing the consumer state and send TxnOffsetCommitRequest with generation. With this foundational change, it is save to execute step 3.

***Note that the above recommended upgrade path is for users who need consistency guarantee. For users who don't worry about consistency, step 2 & 3 could be combined into a single rolling bounce with Kafka client library upgrade. The application should resume work without problem.

Of course, enabling producer per thread is optional, and thus, uses can also just stay with the "exctly_once" configuration (or with "at_least_once" if exactly-once semantics are not used to begin with). For both cases, it is not required to upgrade the brokers to 2.5, and a single rolling bounce upgrade of the Kafka Streams applications is sufficient.

Note: It is also possible to switch back from "exactly_once_beta" to "exactly_once" with a single round of rolling bounces.

A downgrade from 2.6 "exaclty_once_beta" to 2.5 (that only supports "exaclty_once") requires two rolling bounced (i.e., follow the upgrade path in reverse order).

As for non-streams users, they would require following steps:

Since we couldn't predict all the implementation cases, this upgrade guide is not guaranteed to be safe for online operation, and there would be a risk of state inconsistency/data loss.

As stated in the upgrade path, if the broker version is too old, we shall not enable thread producer even running with Kafka Streams 2.6. If you enable "exaclty_once_beta" against pre 2.5 brokers, Kafka Streams will raise an error.