A brief introduction to Apache Pinot and the ecosystem 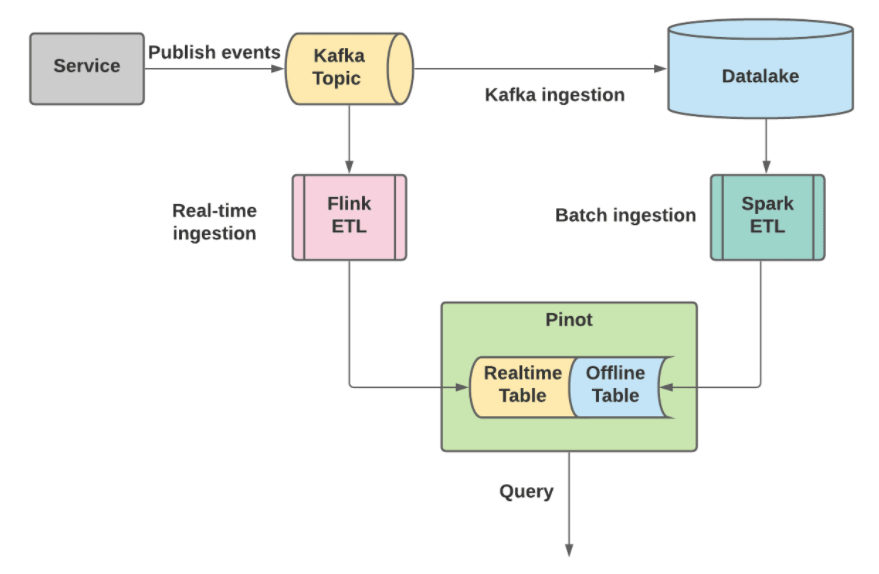 A common problem for this architecture is the duplication of the transformation logic in the streaming and batch ingestion pipelines. Because the batch data source (e.g. Hive datasets) are ingested from the Kafka topic, they typically share the same schema. Similarly, the real-time table and offline table in Pinot are different parts of the same table, and therefore share the same schema. That means users need to describe the same logic twice in Flink and Spark ETL jobs, making the jobs hard to maintain and sync. Ideally, we want to consolidate the streaming/batch ingestion logic, and use Flink for both pipelines.

We propose a Flink Sink to Pinot on top of the TableSink interfaces (FLIP-95) for storing batch processing results in Pinot and also integrate the sink with the Unified Sink API (FLIP-143). The streaming sink is less useful to Pinot, because Pinot does not provide a record write API. Instead, Pinot ingests from the streams and buffers on the server, so that it can directly serve the latest events.

The record writes in the Flink work in the following way, as shown in Figure 2:

And the Pinot sink will be implemented like the following:

The Sink connector can fetch the schema as well as table configurations via the Pinot controller API. The schema and table configs are used for index creation.

The data type needs to be converted during the write operation.

Note by default, Pinot transforms null values coming from the data source to a default value determined by the type of the corresponding column (or as specified in the schema), per the Pinot guide.

An alternative to the Pinot sink could be to use Hive as a data source and Kafka batch as a sink, and then have Pinot ingests from the Kafka topic. However, this does not work for the following reasons: