This document provides an architectural overview of the Apache CXF services framework.

The Apache CXF services framework seeks to build the necessary infrastructure components for services. Goals for CXF are many and include:

The overall CXF architecture is primarily made up of the following parts:

In the upcoming sections, we'll take a look at each layer in turn and examine how they work together. 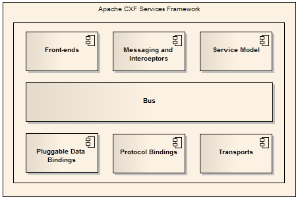 The bus, being CXF's backbone, is a provider of shared resources to the CXF runtime. Examples for such shared resources include WSDL managers and binding factory managers. The bus can easily be extended to include your own custom resources or services, or you can replace default resources like the HTTP destination factory (based on Jetty) with your own (possibly based on another web container such as Apache Tomcat).

This extensibility is made possible by dependency injection; the default bus implementation is based on Spring Framework, which wires the runtime components together for you.

How service calls are processed

Front-ends provide a programming model to interact with CXF. JAX-WS, JAX-RS, Simple and Javascript front-end APIs are provided by CXF . Each implementation is cleanly separated from the rest of CXF, just like the bindings and the core. Front-ends provide functionality through interceptors that are added to Services and Endpoints. See also Front-ends

CXF is built on a generic messaging layer comprised of Messages, Interceptors, and InterceptorChains. Interceptors are the fundamental unit of functionality. By dividing up how messages are processed and sent, this gives CXF a very flexible architecture. It can be reconfigured at any point in the processing. This also gives CXF the ability to pause & resume interceptor chains.

Interceptors have a method, handleMessage, which allows them to act on the Message.These Interceptors can then be built up into chains of interceptors, straightforwardly called InterceptorChains. Some examples include:

Interceptors are uni-directional and are inherently unaware of whether they are dealing with a request, response, or fault.

Let us take a hypothetical simplified example (NOTE: these phases and interceptors don't necessarily exist in CXF). Let us say we are parsing a SOAP message. We may want to have two phases. First, a dispatch phase which parses the soap headers and determines which service to route the Message to. Second, an unmarshal phase which binds the SOAP body to JAXB objects. In the first dispatch phase we could implement this via two interceptors, first a ReadHeadersInterceptor which parses the headers and second a WS-AddressingInInterceptor which determines which service we're invoking from the WS-Addressing header. In the second unmarshal phase, we have just a single JAXBUnmarshallerIntercptor. Both the ReadHeadersInterceptor and AddressingInInterceptor would tell the PhaseInterceptorChain they are in the "dispatch" phase by returning "dispatch" when getPhase() is called. Additionally, the ReadHeadersInterceptor could specify that it wants to run before the AddressingInInterceptor by returning the interceptor id when Interceptor.getBefore() is called.

Before it was mentioned how chains were very dynamic and flexible. In our above example, we could add interceptors specific to that service once it is resolved. Or we could pause the chain once while we wait for some external chain, like an asynchronous service response.

At any point during processing, an interceptor may throw a Fault, or a derivative of a Fault like the SoapFault. This will cause the chain to stop invoking and unwind it. Unwinding consists of calling handleFault on each interceptor that was invoked in reverse order.

InterceptorChains have the concept of a fault observer. Once the chain is unwound, the fault interceptor is invoked with the message that caused the fault. The fault observer may trigger a new chain which then invokes a specified set of interceptors meant to handle faults.

In addition to the concept of a Message, there is the concept of the Exchange. The exchange class holds a references to the in, out and fault messages for the current message exchange.

It also holds properties specific to the exchange, and not just the message. For instance the Exchange holds the Service that is current being invoked in it.

An interesting feature of the PhaseInterceptorChain is that it is reentrant. This can be powerful and slightly dangerous. This feature is only used in CXF during the sending of an outgoing message, The SoapOutInterceptor is the best example:

A service can be constructed from many different sources including classes and WSDLs (1.1 or 2.0). Typically front-ends are responsible for creating a service via service factories. Factory components such as ServerFactoryBean and ClientProxyFactoryBean can used with the front-end to create, publish and consume web services. The factory classes build up the service model and configure the service interceptors, data bindings and more.

The Service model itself is contained in the ServiceInfo class. The following image depicts a subset of the Service Model's packaged API: 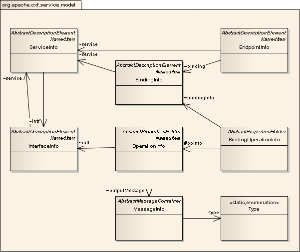 Data bindings implement the mapping between XML elements and Java objects. Data bindings convert data to and from XML, produce XML schema, and provide support for wsdl2java code generation. Not all data bindings support all of this functionality. At very least, a data binding must provide the data conversion. See Data Binding Architecture for details. Currently supported data bindings include JAXB 2.x (default) and Aegis.

The prototypical binding is SOAP. It has its own Message class called the SoapMessage. It adds the ability to hold the current SoapVersion and the headers for the message.

It has many interceptors designed to handle SOAP messages:

Other bindings include REST/HTTP binding, pure XML binding, and the CORBA binding.

CXF includes its own transport abstraction layer to hide transport specific details from the binding and front end layers. Currently supported transports include: HTTP, HTTPs, HTTP-Jetty, HTTP-OSGI, Servlet, local, JMS, In-VM and many others via the Camel transport for CXF such as SMTP/POP3, TCP and Jabber. Learn more about transports here.

Conduits provide the basis for outgoing message sending. A Conduit is created from a ConduitInitiator. Sending a message is a multistep pocess:

Destinations are the basis for receiving incoming messages. A destination is created from a DestinationFactory:

MessageObservers can then be registered with Destinations. These listen for incoming messages:

The most common MessageObserver used in CXF is the ChainInitiationObserver. This takes the incoming message, creates a message Exchange & PhaseInterceptorChain, then starts the chain.

Here's a small example of what might happen when we publish a service via the JAX-WS Endpoint.publish() method.