Within Airflow, data pipelines are represented by DAGs and these DAGs change over time as business needs evolve. A key challenge faced by Airflow users today is with looking at how a DAG was run in the past, when it has been replaced by a newer version of the DAG. This is because within Airflow today, only the current (latest) version of the DAG is represented within the user interface, without any reference to prior versions of the DAG.

However, this is a complex problem, since the current behavior within Airflow of a DAG is “a DAG is a DAG” without any historical or prior version references has served it well in a majority of common use cases.

The scope of this AIP to make sure that the visibility behavior of Airflow is correct, without changing the execution behaviour which will continue to be based on the most recent version of the DAG.

The main scenarios considered and relevant to this proposal are outlined below.

Scenario 1: View logs from a no longer existing task instance

First version of the DAG has three tasks: Task A,  Task B, and Task C. This DAG has been deployed, scheduled, and run. There are no issues at this time and the data engineer has looked at the logs of all three tasks within the Airflow UI.

Second version of DAG has two tasks: Task A and Task C only. This second version is now deployed, scheduled, and run. While debugging this DAG, the data engineer decides to look at the logs for the previous runs, which were based on the first version. However, because of the change in structure, the Airflow UI can only show logs for tasks A and C even for the older runs of the DAG, and historical logs for task B are no longer accessible easily in the Webserver.

This is the primary scenario driving the need for this improvement proposal.

In this context, the definition of “deployed” is that the DAG file is made available to Airflow to read, so is available to the Airflow Scheduler, Web server, and workers. Whether it is available on the local file system or through a shared volume such as S3, is assumed to be immaterial for the purpose of this document.

Scenario 2: DAG updated prior to any tasks being run

First version of the DAG has three tasks: Task A,  Task B, and Task C. This DAG has been deployed and scheduled, resulting in a DAG run having been created.

Airflow handles this scenario cleanly today without any issues i.e. Airflow does not run Task B since the task no longer exists.

Second version of this DAG with two tasks: Task A and Task C is now deployed.

Airflow handles this situation based on the latest version of the DAG. The DAG run continues with task B (from the previous version) being skipped and task C now being run.

There is a school of thought that an alternative behaviour of:

Though this was considered, this is a significant change to the current run-time behaviour of Airflow and not in the scope of the stated goal of this proposal.

In this proposal, the run-time behaviour of Airflow will stay the same as it is today.

However,  the ability to look at the history of the first version of the DAG will be enhanced, similar to the goal of scenario 1 above.

In addition, this Airflow user interface will be enhanced to display the history for this run of the DAG which spans versions. During the rest of this proposal, this is referred to as a “mixed version DAG”.

The same DAG file is re-deployed, without any code changes within the Python file. However, non-code changes such as file timestamps or source code of the Operators referenced within the DAG could have changed.

In Airflow currently, there is no change in the processing of this DAG. There will be no change in behaviour as part of this proposal.

The new version of the DAG is re-deployed, with a code change to Task C.

However, the Airflow UI will currently show the new code of task C for older historical runs of the DAG.

This pattern will be used for identification of a DAG version. Using the iconography paired with the “DAG” prefix wherever possible—establishing a recognizable pattern that will persist throughout various views in the UI. The underlined hash will suggest to the user that it is clickable. The link will go to the Code View with the hash parameterized as described in the “Code View” below. Icon and color scheme subject to change.

Update: All task instance status boxes within the timeline will have an outline added around them. This will add contrast, especially to the white “no status” boxes. As depicted below, runs where a task (in a given tree) did not/will not exist, no box will be shown.

Add: Within the selected timeline, tree structures that changed will now be displayed. Their task name will be grayed out to indicate that the structure only existed for a portion of the given timeline. Note: there may be changes too complex to render, in which case we’ll need to add an indicator that some changes are not visible.

Illustrated in the example below: A failure occurred in the sixth run of this DAG. To remedy, the delete_tag task was removed from the structure branching off of search_catalog. The new DAG version replaced that downstream branch of tasks (grayed out) with a new branch structure (below it). That version ran successfully five times. A subsequent version of the DAG added the delete_entry task to the tip of that branch and is anticipated to execute in the next two (future) DAG runs. If delete_entry were then to be removed prior to running, it would just be removed completely instead of being grayed out.

Add: For the selected DAG run, DAG Version Badges will be displayed in the legend area above the graph chart. If a given run consisted of more than one version, each version will be listed. Similar to the other items in the legend, hovering over the version will reveal on the chart which tasks are associated with the version (non-associated tasks temporarily fade out).

Add: DAG Version will be displayed within tooltips when hovering over the task instances within the chart. 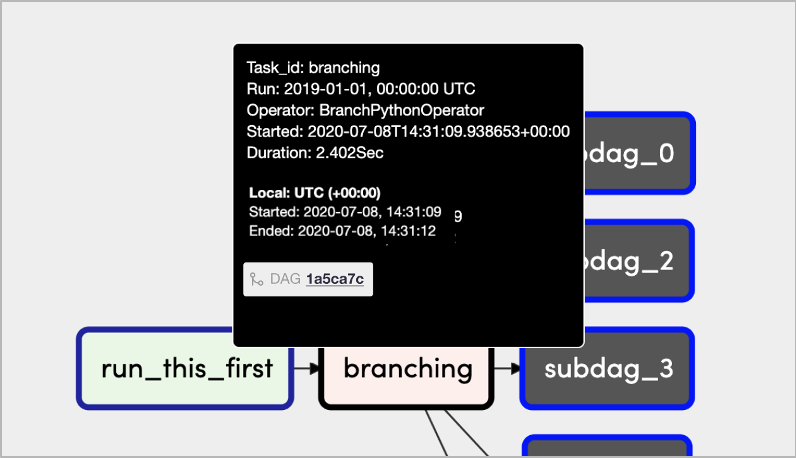 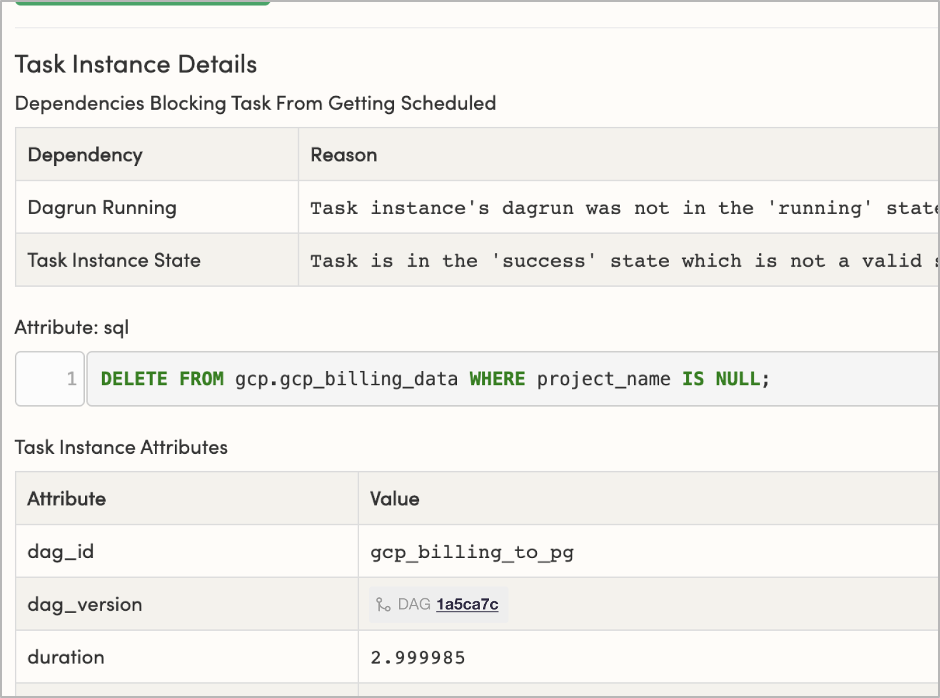 Add: DAG Version will be displayed within tooltips when hovering over the task instances within the chart. 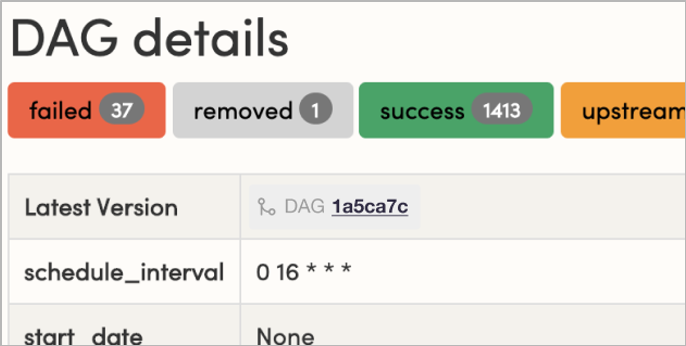 Add: DAG Version selector—a drop down menu with a historical listing of the DAG’s versions. Versions will be listed with their timestamps and displayed in reverse chronological order. Note: date-range filtering may be required if the results become out of hand. 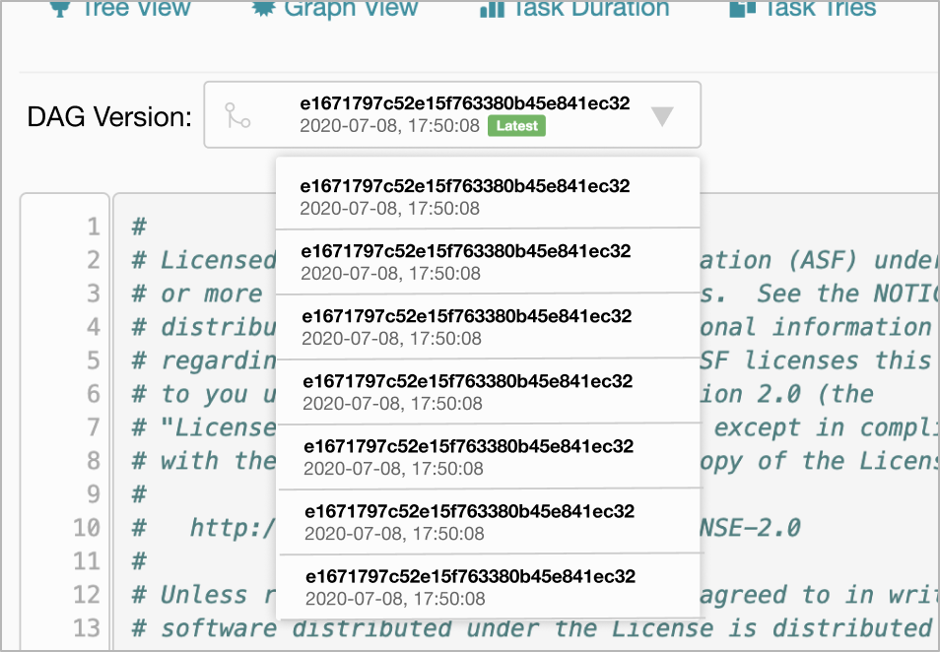 Here are the core elements:

Note: Versions are an intrinsic concept of the system and not something under direct user control (i.e. a User won't be able to tell the Scheduler directly that this is a new version). When a DAG fingerprint changes, Scheduler would mark and store it as a different version.